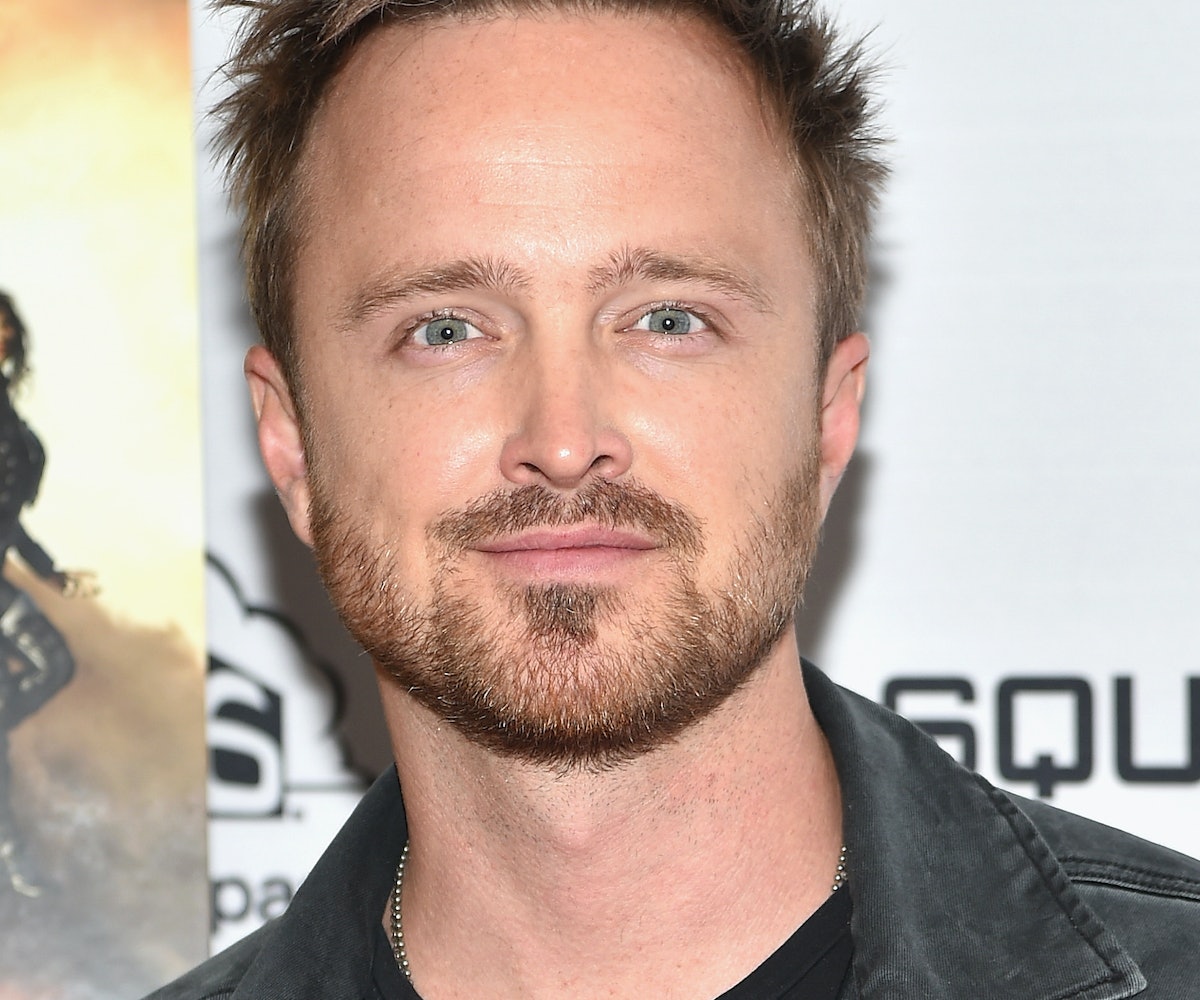 Aaron Paul still gets called "bitch" a lot. Breaking Bad has been off the air since 2013, but his performance as Jesse Pinkman was so definitive that the word still sticks to Paul wherever he goes. And while Breaking Bad's whirlwind success helped propel Paul to leading-man status, it's also left the 37-year-old actor weary of typecasting. With recent roles in the cerebral war thriller Eye In the Sky and the Hulu's cult drama The Path, it's been good so far, though.

The same goes for Paul's latest movie, The 9th Life of Louis Drax, in which Paul plays Peter Drax, the father of the eponymous problem child whose continuous close encounters with death culminate in a coma after falling off a cliff on his ninth birthday. Peter disappears, leading many to believe he pushed Louis. That ambiguity gave Paul room to portray a possibly sinister though seemingly warm-hearted father in the movie's crucial flashbacks. We caught up with Paul to discuss the complicated nature of his latest role, his dreaming of an acting career since he was nine years old, and his eternal association with the "b" word.

Peter is hinted at as being villainous but appears very loving. How did you try hide to his intentions?

I don’t know. [Laughs] That’s what really had me gravitate to this story. You never really know what side of Peter you’re going to see. Once Louis goes into a coma, his father just mysteriously vanishes and he becomes the main suspect. His wife is saying, “Well, maybe he pushed Louis off this cliff.” You see different sides of Peter. You see this aggressive, passionate, frustrated man toward this woman. You also see this loving, nurturing side of Peter toward his brilliant boy. It really depends on what perspective you’re seeing Peter as, because a lot of it is being told from Louis’ point of view inside of his coma. A lot of it is being told from Natalie Drax’s point of view, and she just sees him as this angry, aggressive, hot-tempered man.

He does seem so driven by love. Could you relate to that? Do you find you’re a very emotional person?

Aren’t we all? [Laughs] Yeah! I think it’s good to be driven by love. I love that about this story. Also, I love that you never really know what’s right around the corner. Nothing is as black and white as it may seem. This story is such a psychological thriller. You’re kind of on the edge of your seat trying to figure out what the fuck is going on. Hopefully, by the end of the film all of your questions will be answered.

How did your experience with married life influence your dynamic with Sarah Gadon?

I don’t know. [Natalie and Peter’s] relationship is a complicated one. I didn’t really bring much of my own personal love life into it. This story was so well written that I instantly connected with this guy and all these characters. And god, Sarah Gadon is just such a force. [She’s] distractingly beautiful and distractingly brilliant. I was so lost in all of these scenes working opposite of her. I absolutely love her to death as a person and as an actress.

I was like a member of the Goonies. The Goonies and Stand By Me—I love those coming-of-age stories. [I was] mischievous, constantly searching for an adventure. I grew up in Idaho, so there was nothing but lakes and mountains and rivers and nature and exploring. That was kind of my world.

Do you remember what you wanted to be at nine?

I don’t think I was really thinking ahead. I knew that I wanted to be in this industry from a very young age. It must have been just after 9/11 that I started saving up change and any loose bills in a jar on my bedside table to move to L.A. No joke. It was such a pipe dream. It’s true. When I was watching movies like The Goonies and Stand By Me, I saw more than just movies. I saw these kids playing make-believe on such a different level. I was like, “I want to do that!” I started saving up money because I knew I needed that. What about you? Did you know what you wanted to do when you were nine?

I was in the fourth grade. I think I just started realizing that girls didn’t have cooties, and I’m like, “Wow! Girls are actually kind of cute. I don’t want to tug on their hair anymore—or maybe I do because I’m flirting with them?” As kids do.

After such a career-defining role with Jesse, how do you avoid being typecast? Is that something you’re particularly conscious of?

Oh yeah. For sure. It’s just all about trying to mix it up a little bit. Jesse Pinkman was such an iconic television role that I was very blessed to have been able to play. I think until my dying day people are going to see me as Pinkman. Until my dying day, people are going to ask me to call them a bitch. [Laughs] That’s fine! It was a career-defining character. Everyone involved with Breaking Bad spread their wings on camera and off. It’s just about diving into different roles—showing the world that you are an actor and you can play different characters. And hopefully, people will respond to the different characters I choose to play.

Do you feel like any of Jesse has lingered?

Yeah. It’s incredible that I think Jesse Pinkman had a huge hand in how people view the word "bitch." People say it as a term of endearment almost. I get called a bitch every day. [Laughs] With Jesse, there’s always going to be a piece of him in me.

You usually go for more serious work, but you’re also doing BoJack Horseman. What made you choose that?

Well BoJack is probably the heaviest animated show on television. I’ve always wanted to do an animated show. When they approached me to develop this with them, it was a dream come true. It was sent in a spec treatment, and I felt very privileged to be a part of it. I read it and loved it. They asked if I wanted to executive produce it. Of course, I said yes. Why not? I love the people behind it, and I think we’re telling such an incredible story as well as pushing those hot topics that people are afraid to talk about. It’s great, an animated show that revolves around animals and humans that co-exist and sleep together and work together. It’s not weird, and I love that.