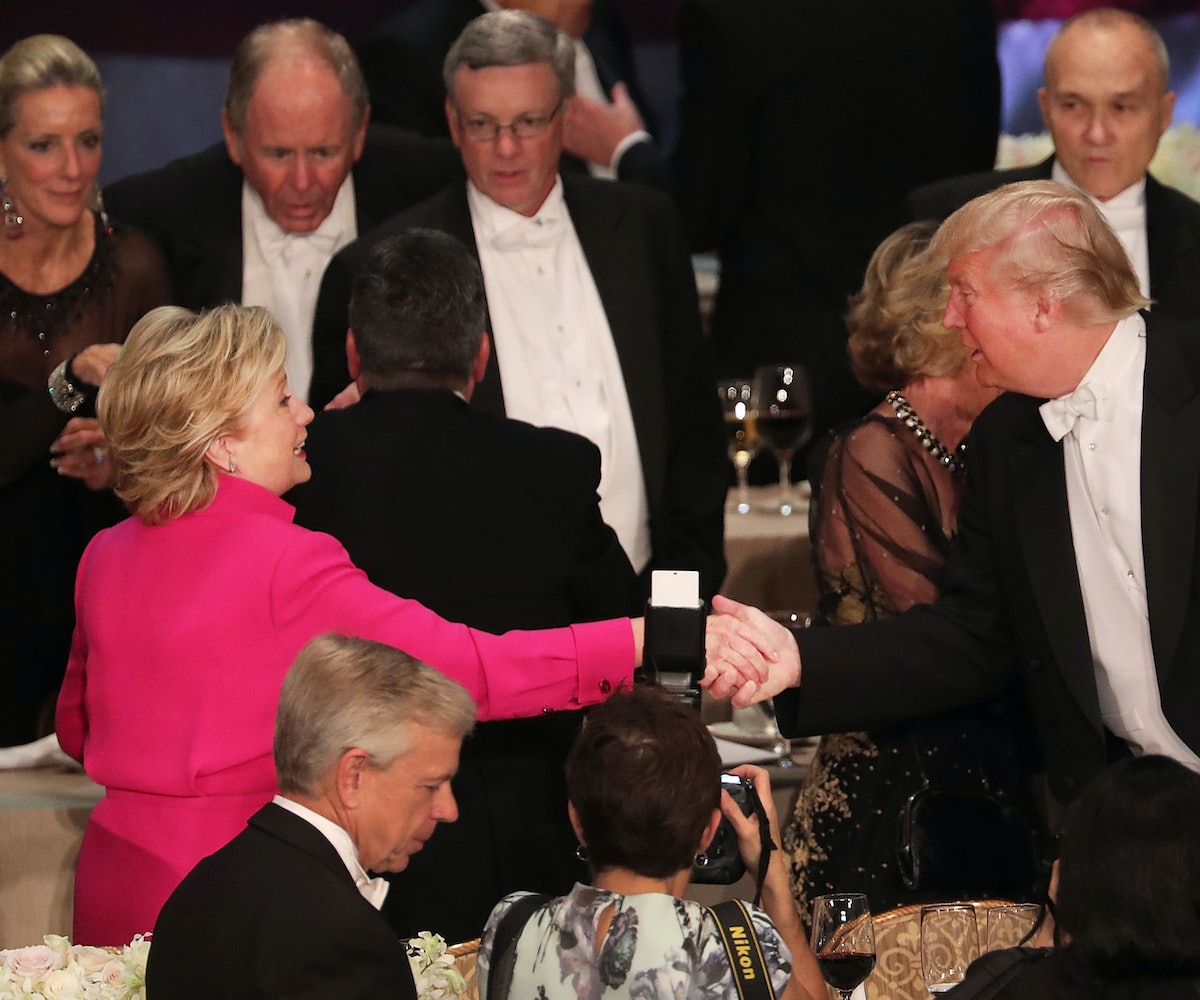 One of the strangest rituals in American politics is the Alfred E. Smith Memorial Foundation Dinner, which near the end of a bitterly fought presidential campaign unites both candidates at the Waldorf-Astoria Hotel in New York to roast each other in a room full of people wearing tuxedos and evening gowns. But the spectacle of watching Barack Obama and Mitt Romney trade barbs in 2012 was nothing compared to last night, when just one day after their brutal third debate, Donald Trump and Hillary Clinton found themselves seated at the same table, separated only by Cardinal Timothy M. Dolan, the archbishop of New York. It was surreal.

The two candidates spoke briefly and, unlike in their last debate, managed to shake hands. But no one knew what to expect once Mr. Trump, who went first, took the stage. Normally he’d go up there, tell some jokes about himself, make fun of Hillary a little, everyone would laugh, and that would be it. But nothing about Trump’s campaign has been normal, and you can now add the Al Smith dinner on the list of presidential election norms that he has shattered. Trumped started off by telling some jokes that actually worked. "And even tonight, with all of the heated back and forth between my opponent and me at the debate last night, we have proven that we can actually be civil with each other,” he said. “In fact, just before taking the dais, Hillary accidentally bumped into me, and she very civilly said, 'Pardon me.'" It was a reference to his threats of jailing Clinton should he win the election, and, surprisingly, she burst into audible laughter upon hearing the punch line.

Trying to give an example of the media’s bias toward him, Trump brought up his wife Melania’s infamous convention speech. "Michelle Obama gives a speech, and everyone loves it, it's fantastic," he said as his wife looked on, slightly mortified. "They think she's absolutely great. My wife, Melania, gives the exact same speech, and people get on her case!"

But that’s when things got weird as Trump, who just couldn’t help himself, began to attack Clinton for real. "I wasn't really sure if Hillary was going to be here tonight because, I guess, you didn't send her invitation by email. Or maybe you did, and she just found out about it through the wonder of WikiLeaks," Trump said. "We've learned so much from WikiLeaks. For example, Hillary believes that it is vital to deceive the people by having one public policy and a totally different policy in private." That caused the audience to boo Trump for the first time, an unprecedented moment at this event. He never recovered from there.

Once Hillary took the stage, you could almost hear a collective sigh of relief from the room. After briefly mocking herself, saying she took a break from her rigorous “nap schedule” to be there, Clinton quickly set her sights on Trump, and she did not hold back. “People look at the Statue of Liberty and they see a proud symbol… a beacon of hope for people around the world,” she said. “Donald looks at the Statue of Liberty and sees a four. Maybe a five if she loses the torch and tablet and changes her hair.” The crowd burst into laughter. Trump, who lacks the gene necessary to laugh at yourself, held a tight smile for most of Clinton’s set, occasionally breaking into actual laughter, a surreal sight in and of itself.

"Donald wanted me drug tested before last night's debate... I am so flattered that Donald thought I used some sort of performance enhancer. Now, actually, I did. It's called preparation."

“Come to think of it, it’s amazing I am appearing after Donald. I did not think he would be okay with a peaceful transition of power. And, Donald, after listening to your speech, I will also enjoy listening to Mike Pence deny that you ever gave it.”

“Donald really is as healthy as a horse—you know, the one that Vladimir Putin rides around on.”

Watch both speeches below.