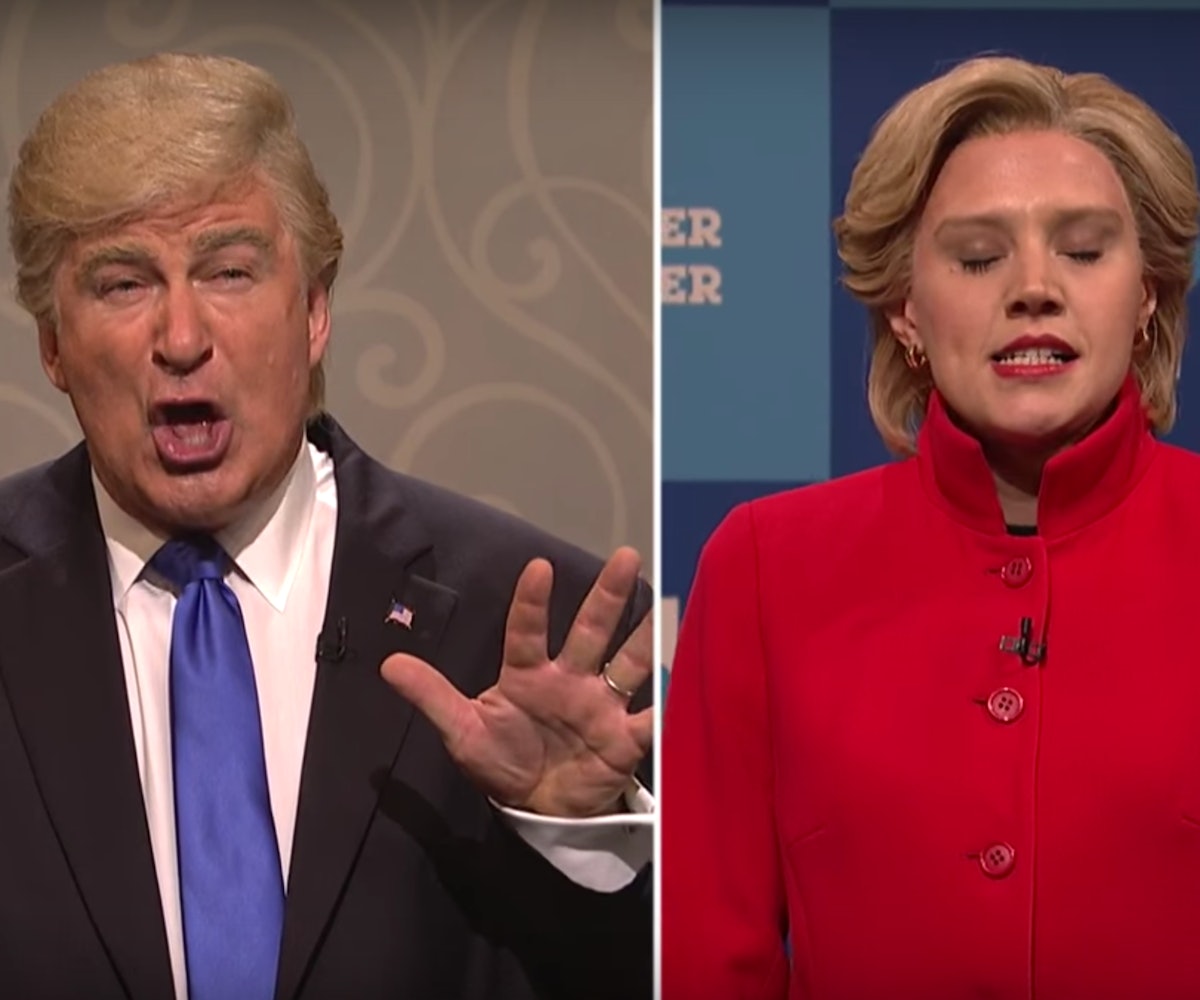 Since Tuesday is Election Day, this weekend was SNL's last chance to parody the mile-high dumpster fire that is the 2016 election. Alec Baldwin and Kate McKinnon returned as Donald Trump and Hillary Clinton. With Baldwin's Trump dressed like a moldy sweet potato who'd just sucked on a lemon, and McKinnon's Clinton in a ketchup-red pantsuit, the two once again went back and forth about Clinton's emails and Trump's questionable connections to the FBI, Russia, and the KKK.

Cecily Strong played the moderator as Erin Burnett on CNN's OutFront, and instead of focusing on Trump and the fact that he still hasn't released his taxes, she chose to only ask questions about Clinton's leaked emails, the most recent of which don't even involve her or her computer. Baldwin as Trump says that he doesn't even use email, only a "very secure site, where one can write whatever they want to and no one will read it," referring to Twitter. When Strong's Burnett says everyone can read his tweets, Baldwin says, "And I'm still in this thing?" We're shocked, too.

When McKinnon's Clinton accuses the FBI of attempting to get Trump elected president, Baldwin's Trump claims the FBI doesn't like him. "What even is the FBI?" he says. An FBI agent then comes into the frame, says he's going to get coffee and asks Trump if he needs anything. "No I'm good, thanks sweetie," Trump says before kissing the agent. "It doesn't seem like enough of a story, let's get back to your emails," Strong's Burnett says, before McKinnon lets out a primal scream. McKinnon begs for someone to release something on Trump, since the entire Russian government is releasing information on her. Baldwin's Trump claims to not even know what a "Putin is," before a shirtless Beck Bennett enters the frame as Putin and asks if Trump needs anything from the store. "I'm good, thanks sweetie," Baldwin says before kissing Bennett.

Again, Strong's Burnett ignores the kiss and wants to go back to the emails. Then Baldwin's Trump accuses Burnett of "lezzing" Clinton. When Strong's Burnett points out that that doesn't even make sense, Baldwin says it doesn't matter beacuse he said it and "now half the country believes it." Baldwin's Trump goes on to show his support of the "LB" community, leaving out the G and T. "See this is how he talks," McKinnon's Clinton says. "He pretends to be pro-gay, but then his running mate believes in conversation therapy. He says he's not racist, but this week the KKK endorsed him for president."

"What even is a 'k'?" Baldwin says before cast member Kyle Mooney dressed as a member of the KKK asks if Trump would like to join him for a run and then kisses him. Again, McKinnon's Clinton desperately tries to divert the conversation to Trump and the KKK, but Strong's Burnett goes back to the emails.

"What is happening?" McKinnon asks. "Is the whole world insane?"  She then lists all of the things Donald Trump has ruined that Americans hold dear, like kindess, decency, Tic Tacs, taco bowls, the color orange, and men. Right when Baldwin's Trump starts to come at Clinton for being a liar and a crook, Baldwin stops, and turns away from the camera. "I'm sorry Kate, I just hate yelling all this stuff at you like this," he says, breaking character. "I just feel gross all the time. Don't you guys feel gross all the time about this?" he asks the audience.

"You know what I think can help us?" McKinnon says. "Let's get out of here." Hand in hand, they run out of the studio and into the street, where McKinnon hugs Trump supporters in "Make America Great Again" hats and "Trump That Bitch" tank tops, and Baldwin hugs Black and Hispanic people. Baldwin gives McKinnon a piggyback ride while she eats cotton candy. Everyone holds hands and sings kumbaya. Once Baldwin and McKinnon are back in the studio, they get serious. "None of this would've mattered if you don't vote," Baldwin says, and McKinnon reminds everyone. "On Tuesday we all get to a chance to choose what kind of country we want to live in." Watch the full sketch below.