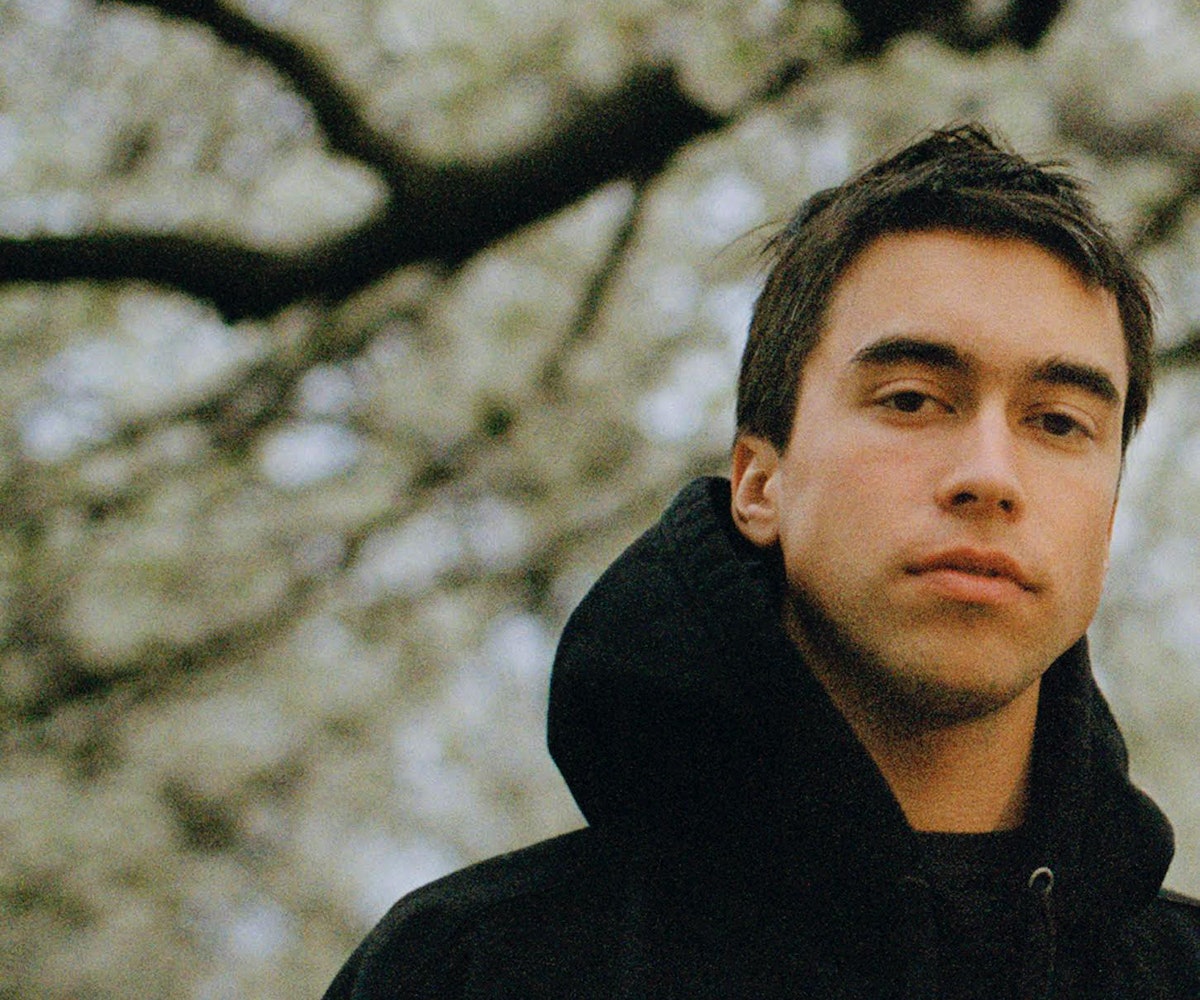 Philadelphia has always been known as a city with a prospering music scene, but bands don't always make an influence beyond the Tri-State perimeter. So when a group like Alex G breaks out of the local scene, it's a triumph worth acknowledging. The four-piece, indie-rock band is made up of friends Alex Giannascoli (rhythm guitar, vocals), Sam Acchione (lead guitar, vocals), Scotty Leitch (drums), and John Wesley Heywood (bass). Their music channels classic '90s rock nostalgia, but in this age a blast from the past isn't necessarily a damper. Living in a daydream is far more satisfying than dealing with reality, and that's essentially the allure of mentally escaping to the sound of Alex G.

Alex G's newly released Beach Music LP marks the band's seventh full-length album and their official debut on Domino Records. In celebration, the band played a record release show at Baby's All Right, an acoustic set at Rough Trade, and a benefit show for Silent Barn in Brooklyn last weekend. All of the gigs sold out—the first two provided more intimate settings with a smaller capacity, while the last venue fit upwards of 500 attendees.

Giannascoli is the face and frontman of Alex G. In addition to being a multi-instrumentalist, the 22-year-old has also been hailed as one of the best emerging rock artists of our generation: The New York Times referred to Giannascoli as a lo-fi introvert, Rolling Stone dubbed him a prolific indie-pop prodigy, and The FADER labeled him as the Internet's secret best songwriter. But when I showed up at Baby's All Right to meet this legend in the making, all of those titles seemed irrelevant, though.

Across the table sat a guy wearing a crewneck sweatshirt and baggy jeans with construction boots and a hat. He was fresh out of soundcheck, and before that he was busy answering random questions on Reddit. As we talk, I find myself wanting him to let me in deeper, but he's more quiet and reserved than I expected. At that moment, I realize that despite his trajectory toward rock stardom, Giannascoli is just a normal guy from Havertown, Pennsylvania. I couldn't blame him for the awkwardness that hung in the air because he doesn't really see himself as anything special—in his mind, he's an ordinary dude. Later on, Giannascoli would tell his audience that he wasn't as chatty in-between songs, because he ate toxic pizza that made him throw up; they would laugh while staring in awe.

How has the Philly music scene changed since you've started playing at venues that you grew up going to shows at?

It's cool. We're progressing just in time, so I didn't have time to get tired of playing house shows. We still play them when we get the chance under fake names.

What were you studying at Temple University before you dropped out?

I was studying English.

That totally makes sense. Did you pick that major because you wanted to be a teacher?

Yeah, I didn't really know. I knew it was a pretty versatile major, so I chose that. My plan was basically being a teacher.

Critics are saying you're one of the best songwriters of our time, do you think you would ever write a book?

I don't know, probably not... Hopefully, I'll be able to get that disciplined and be able to write like that. I don't know if I have it in me right now.

Publishing a book is a lot of work. I mean, people spend years working on one book. I don't know how writers have that commitment.

Yeah, I think good writers have a lot of discipline and I don't have that in me.

Who are some of your musical influences?

I listened to a lot of Modest Mouse growing up, and The Knife, too. Radiohead... All that '90s weird stuff.

Do you remember your earliest memory of music?

My brother played a lot of music. He's sort of why I took up music, because he's really talented. He has perfect pitch, and he would get all these instruments and I would play the stuff that he stopped playing pretty much. I remember him playing the piano when I was a little kid and I thought it was cool.

How old were you when you first started writing songs and formed your first band?

I always wrote little songs, but they were really bad. Being a little kid, I'd sit at whatever instrument, and I always preffered making stuff up as opposed to learning other people's stuff. I formed my first band [Skin Cells] when I was about 15 with Sam.

Okay, I don't want to ask how you came up with your band name because it is your name, but why did you decide to go with that?

I used to just send the music to my friends and I wouldn't put a name on it, and then they would label it as Alex G. That was just what everybody called me, because there was another Alex or something, and it would be on Last.fm or whatever like "Alex G."

What was the creative process like for your new album Beach Music?

The process is pretty much the same process that I’ve always done. I’ll sit and play the guitar for a while and when something sounds good, I’ll record it and then add onto it. Really straightforward. That’s about it.

What are some of your favorite tracks off your LP?

They’re all the same to me. I guess there’s one—I have a least favorite track. Track 10. It’s called “Ready.” I think it’s Track 10... I just like that one the least. I worked pretty hard on them all, so I can’t pick a favorite.

How would you describe the vibe of Beach Music?

I guess kind of isolating. I think all the songs are really one-sided. I think the theme is isolation. Not like an overarching theme, but I think that’s the feeling someone might get from listening to the album.

All of these music blogs and publications have been saying you're like an indie-rock prodigy...

That stuff is really nice, but it's so temporary. It doesn’t really make me get that excited because it goes as fast as it comes. I just make music because I think I’m good at it and I’m worse at everything else. I’m lucky I’m riding this wave right now, but I’m just gonna keep making music and hopefully I can keep making a living doing it.