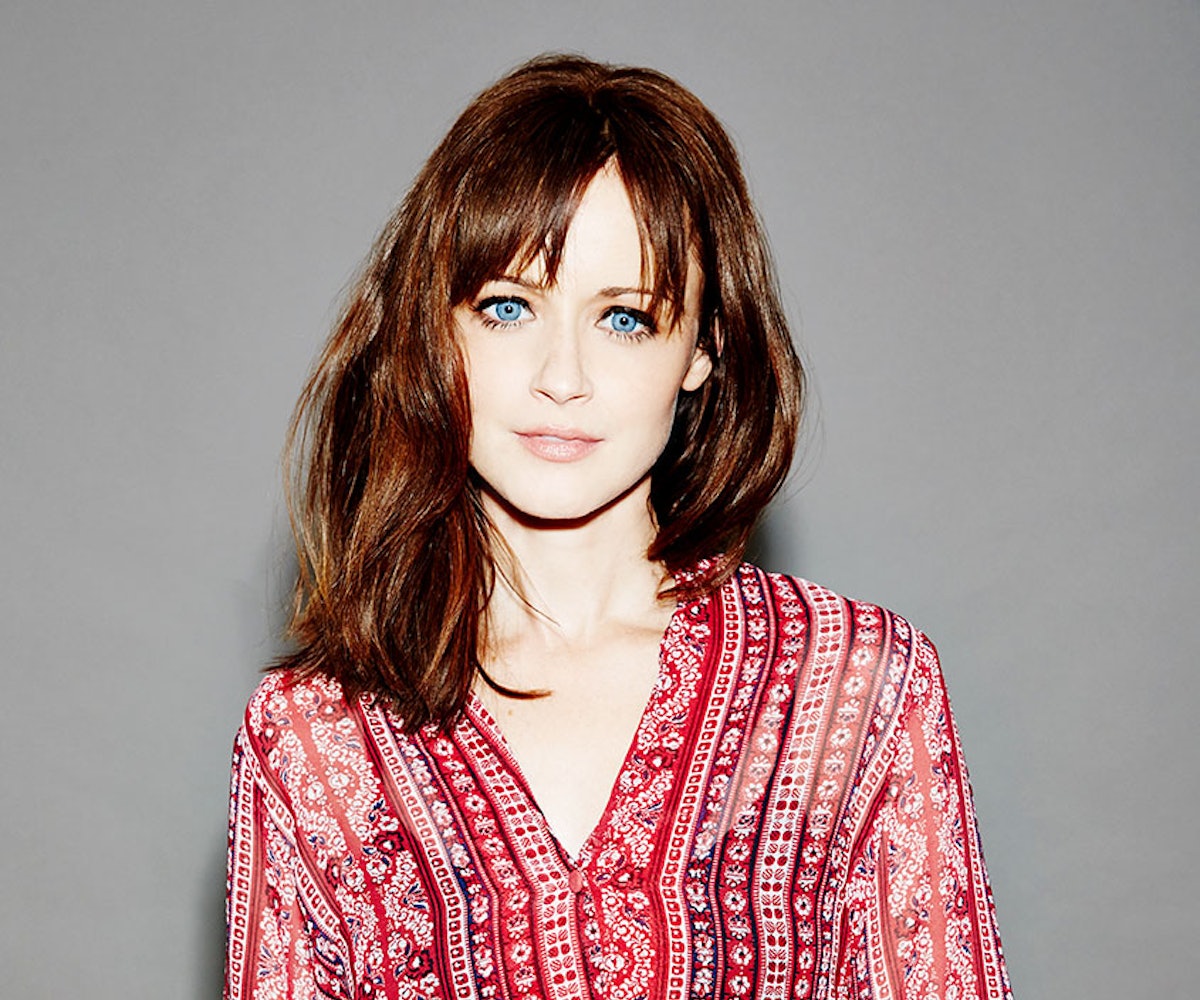 Alexis Bledel is having quite the summer. On top of the release of her new movie Jenny’s Wedding, where she plays the free-spirited girlfriend to Katherine Heigl’s Jenny, she recently made über fans super happy with her Gilmore Girls reunion down at the ATX Festival. On top of all that, she maybe-not-so-accidentally leaked the fact that her Sisterhood Of The Traveling Pants may be reuniting for a new movie. (Yay! Yaaay!)

When we spoke with her, she had tons of ideas for a totally stylish, vibrant shoot. The actor has truly come into her own, both embracing and releasing her past as the titular Gilmore girl—and reflecting on her own marriage (especially in light of Jenny’s Wedding), her career, and what she wants next out of life.

So, tell us about Jenny's Wedding.This film is about a woman who has to come out to her family because she wants to get married. She’s lived with her 'friend' for a long time. They were roommates, so her family just thinks that they are roommates. And her family’s ultra-conservative, so she has to tell them more about her life. And they each have their own unique reaction to her news that she wants to celebrate. Her family has to go through their own process of understanding who she is, I guess, in a new way, because they had other ideas about the person they thought they knew. But my character was fun to play. She doesn’t come from a conservative family, so I think she’s really comfortable with who she is. She’s not having to face the same challenges. She’s just kind of there for her partner and excited to get married.

Marriage, for a lot of people, is still a privilege. Has this film made you think about marriage in a different way? Do you ever think about how lucky some people are to make that decision without even having to think twice about it?Yeah, I was planning my wedding while we were shooting, so it was surreal to kind of go through the scenes of the wedding itself and think about how much these characters have to go through just to get to that point. And, you know, it was so easy for me to just plan my wedding and celebrate and have everyone be happy for me. The great thing about this movie is, I think, the way it concludes, which I can’t say much more about, but [pause] what can I say about it? I can’t because I’ll say how it ends.

Clothing and shoes by Tibi.

How do you feel about the Gilmore Girls reunion?It’s almost like a college reunion, because I was like college-age up to the time when I was working on the show, so I certainly learned a lot there. So yeah, I mean I haven’t seen a lot of the cast certainly for years and years, so it’ll be really fun to have so many people again, because I think they have almost everybody from the main cast on the panel that we’re doing. So it’ll be just kind of surreal. I feel like I need to kind of catch up on what a lot of people have been doing.

I was already a teen when the show started. But a lot of people are like, “Oh, you grew up on the show.” Some audience members feel that way, so I think most actors who experience that sort of long-term commitment then try to always see what other characters they can play afterward and find a new path to recreate themselves. I was very focused on that when the show ended, so I had to kind of move forward for myself. So looking back, it’s almost going to be like meeting these people again, because it’s been ten years. It’s been so long.

What do you think Rory would be doing now?I think she’d be a journalist for either a newspaper or an online publication. And I think she’d be pretty ambitious, but maybe reaching the point where she’s having to like—if she’s now 28 or something, maybe she’d be not burnt out but reaching a point where she either has to keep going further in her career or balance out life and career. That’d be, I think, kind of where she’s at, I imagine.

And then obviously the question you’ll be asked a million times—I’m sure you’ve been asked before, which is: Logan, Dean, or Jess? And why?I think she moved on from all of them.

Really?I think she'd be over them—that’s probably not a popular response.

I think it’s totally legit.I think all those relationships ended for a reason. I don’t know the answer to that. I’m not that close to her in that way.

That’s so funny, but that’s a good point. All those relationships did end for a reason.She should have somebody new.

So what are your plans this summer?I tend to renovate properties when I’m not working.

That’s a cool project that you’re able to do.It’s fun for me, because it’s creative and I can kind of control it. My job is very out of my control a lot of the time, because I don’t want to get into like producing movies, although we are trying to make another Sisterhood movie.

Oh, you are?Yeah, we’re producing a third one.

Is it just you and who else?The four actresses and we have Ken Kwapis from our first film—he was our director. Yeah, but I don’t think we’re supposed to talk about it.

Are you guys still friends? Do you still keep in touch with them?Yeah, I mean, everybody’s busy working, so it’s like we see each other more sporadically now than we used to.

It must have been so nice to have a group of women your age to kind of go through something like that together.Yeah. When we did the first film, I forget how little we were. Like, 20 or something.

What shows out there are you really loving?Well I loved working on Mad Men.

What did you think of the ending?I loved it. I thought it was perfect. I just look for good writing, you know. It could be any genre, any world for a show. I just like complexity and storytelling, because that keeps me really engaged in my work, especially on something longterm, like a TV show. But yeah, I audition for shows all the time, and it’s just about finding the right one.