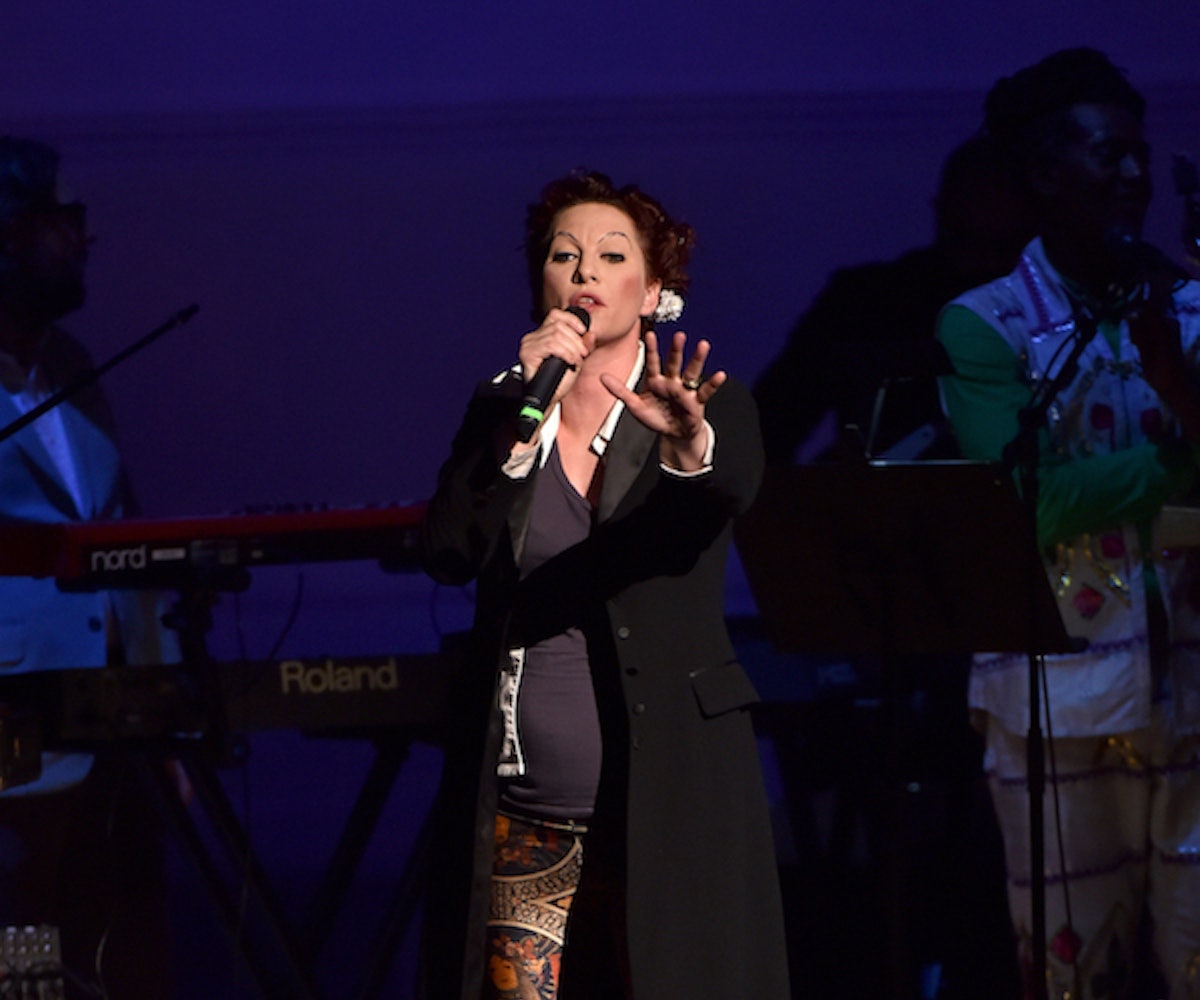 On Thursday, singer-songwriter and leader of The Dresden Dolls, Amanda Palmer, posted a message on Patreon about her hopes for art and music under the Donald Trump administration in America: namely, that it will inspire a new generation of punk and protest art to help inspire and inflame the masses to stand up for the various freedoms that may very likely be taken away for women, people of color, and non-Christians in the United States. This inspired quite the Twitter storm, with people pointing out that Palmer's basic premise ignores the very real trauma and suffering people will almost certainly be enduring and instead romanticizes a "more real" kind of music that benefits from this suffering. Author and editorial director for music at MTV News Jessica Hopper took down this "silver lining" mentality on MTV.com shortly after election day, outlining why this kind of thinking is not only dangerous, it's also not a phenomena that's actually going to happen the way Palmer thinks it will.

Palmer isn't exactly wrong, though. On a basic level, it is undeniable that throughout history, people have created incredible works of art, writing, and music in protest, response to oppression, or as a means to help themselves and others through difficult times. Art in all of its forms has always been a powerful way to inspire people to action and to help the collective to cope. Palmer doesn't spend a lot of time talking about this in her original post, but she doesn't outright ignore it either.

"My friends," she says, "Donald Trump-land is not going to be great for free speech, for internet freedom, and for a more tolerant society. and as far as ART goes, these *are* the times when things get riskier. and more important. as it always is, as it always was. I'll say it over and over again til I'm blue in the face." Her point is that times are undoubtedly going to get tough but that we need music and art to expose these difficulties rather than refuse to speak about them for fear of retribution. And that is in and of itself an important point: The only way change gets made is when we speak out and stand up, and sometimes, the most relatable and charged messages come from art.

But to speak out or stand up takes either an incredible place of privilege or an incredible place to courage, often far more courage than the word "risky" suggests. Those who are privileged—say, the Dixie Chicks (to use the one "protest" group Palmer brought up)—can do so without much fear of getting thrown in jail, or brutalized by the police, or shot. The ones who have courage are the ones who risk it all every day and fight despite that: that's the Ferguson unrest, the Black Lives Matter movement, escorts at Planned Parenthood clinics, and so much more. And that's all pre-Trump! Can you even begin to imagine what it will be like to stand up next year? An armed march against Jews is being planned in Montana. And someone gives a shit right now about how Trump is going to inadvertently Make Punk Great Again?

Hopper's premise in her MTV piece is that it's exploitative to hope that great music comes from people's pain and points out that the policies Trump will enact will very likely endanger the female, queer, and non-white performers we love and often take for granted. She says, "The silver lining to winding up with four years of Trump and the oppression he promises, it was said, is that music will be better: Punk will rise up, or maybe pop will deflate and get 'real,' gain meaning, be explicitly political... But we need to see it for what it is at its core: It’s not a joke; it’s indifference to the plight of other people, and ignorance of the many ways a Trump presidency threatens to ruin lives." Can we expect the very people Trump's policies will hurt to tour and to keep performing for us just to make us feel better and to help us cope? Isn't that white privilege in a nutshell: telling people of color do this and do that and also do that other thing so we can feel better? "It’s a blithe dare for artists to come out on the other side of trauma dancing—survive, and entertain us, too," as Hopper puts it.

And the sad thing is that the people expecting this new musical renaissance aren't realizing that we're already in one. For example, the last two years alone have seen an incredible flood of music exploring black identity—Hopper lists Rihanna’s Anti, Kendrick Lamar's untitled unmastered. and To Pimp a Butterfly, Anderson .Paak's Malibu, Young Thug's Jeffrey, Kanye's The Life of Pablo, Beyoncé's Lemonade, Solange's A Seat at the Table and Lin Manuel Miranda's Hamilton soundtrack, amongst others. If we take a moment to think about these artists as actual people, can you stand by as they and their communities go through continued loss and discrimination and think well, at least they'll write a great album out of it or well, now's the time to stand up and speak out. People have been speaking out all along, it's just that the privileged don't often listen.

Palmer does seem to recognize the limitations of her statements and has since had some interesting exchanges on Twitter, both thanking her supporters and exchanging thoughts with some of the people who challenged her. As one tweet pointed out, "You know, Amanda Palmer, I'd rather have my right to an abortion and mediocre punk rock, than great art and be a fucking slave," to which Palmer replied, "I share your sentiment." Another pointed out that tons of other people have said exactly what Palmer said but haven't gotten raged at for it, illustrating how society treats women who aren't afraid to be loud and outspoken. And really, this coming together and having a dialogue is what Palmer is, at least in part, advocating for, and it does work! It's fueled the Black Lives Matters movement and has helped advocate for LGBTQ rights, amongst other things. Palmer isn't wrong. It's just that this work has been happening all along, even if some of us didn't recognize it as such. We can't rely on marginalized populations to inspire us to fight for their rights through art; we also need the Amanda Palmers of the world to also create and use their visibility to help enact change, but they need to do a whole lot of listening, too. Otherwise they will miss the entire conversation.

(Via MTV.com and Patreon)