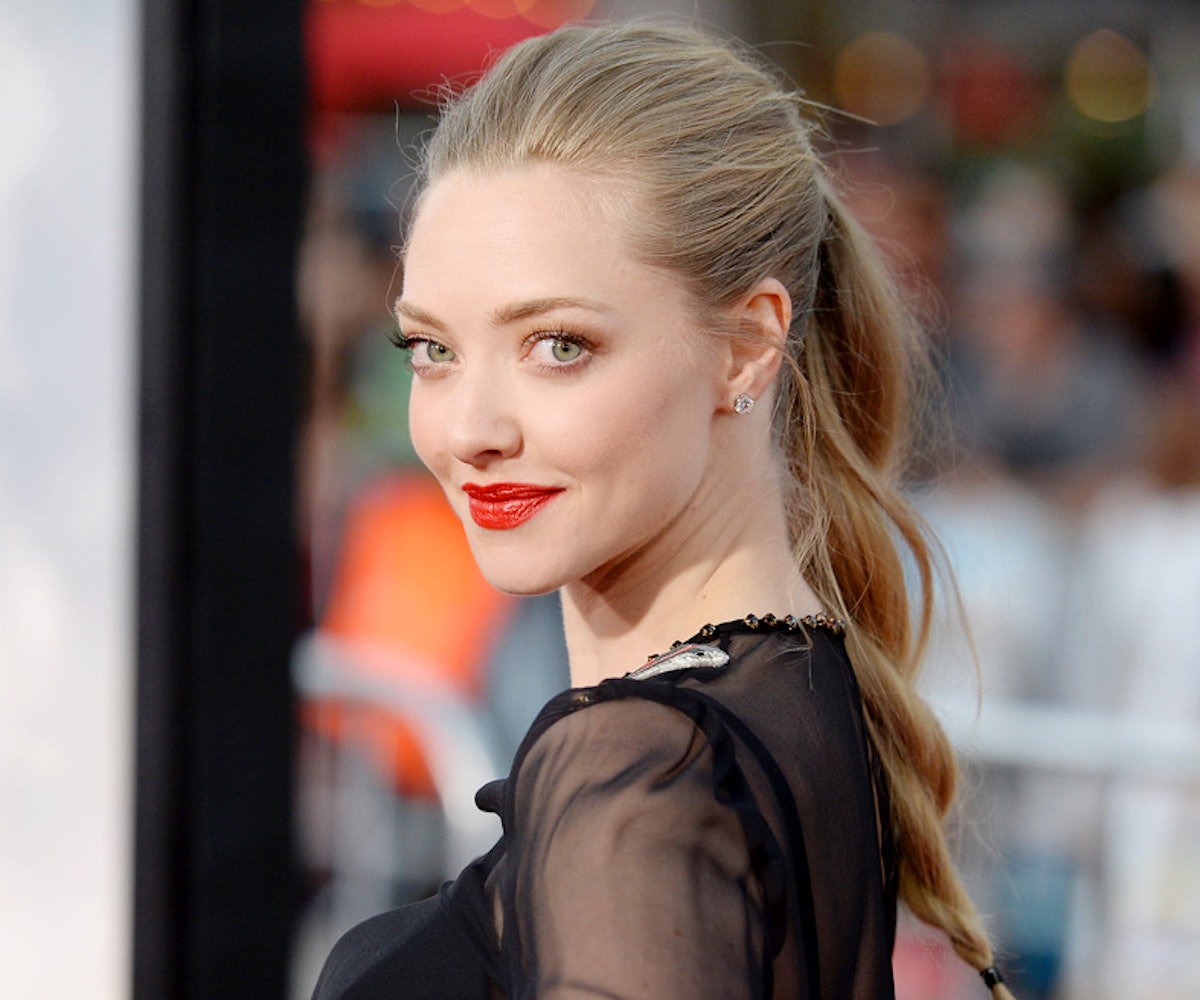 When Jamie and Darby meet Josh (Ben Stiller) and Cornelia (Naomi Watts), they all become infatuated with each other’s lifestyles. Josh is a documentary filmmaker struggling to make his next movie (while still looking cool doing so) and Cornelia is grappling with the decision to have a child. Jamie and Darby, on the other hand, seem careless and inspired in their artistic and personal pursuits. As the couples become closer, they realize the gaps that exist in their generations. Can a non-committed, selfish lifestyle lead to consequences, freedom or both?

When we chatted with Amanda, she was stretch on the couch barefoot, with her adorable dog by her side. Naturally.

Well, I just moved to New York and I must say, this film is exactly what I needed to see upon arrival. I’m still learning about the Williamsburg-esque hipster!

It paints such a fun picture of Brooklyn. I’ve really started to enjoy Brooklyn more because of this film. There are very ambitious people, people who believe everything is theirs for the taking, like Jamie. That’s okay...to an extent. A lot of the younger generation, I’ve noticed, think they can just rule the world, which is interesting and optimistic.

Do you live in New York?

So, upon reading the script and going, 'Okay, Baumbach is clearly saying some things about Generation Y or Z.' Did you feel like, 'Oh, he’s right, that’s me' or 'he’s writing about somebody else'?

I certainly don’t’ relate to Darby and Jamie so much in terms of their lifestyle. I’m a nester and Darby, especially, is a non-committal, fly-by-the-seat-of-her-pants.

What do you mean by nester?

I have a dog. I like to commit to things. I set up home very quickly. I’m the person in the hotel room that moves everything around, puts throws and pillows down. I like to make things my own and feel like I’m a part of something. I’m not comfortable traveling and just dropping everything and going somewhere. I’ve got roots that I hold onto very tightly.

Considering Darby isn’t really that way, how did you find avenues into her freedom and naivety?

She has little flecks of Karen from Mean Girls, a wide-eyed…she’s very curious and so am I. There are a lot of things that we do share in terms of [being] very constantly inspired by things and very observant of other people, very curious and open. I completely relate to that.

Do you think you’re more cynical than her maybe?

I related to Darby too but kept thinking, is it possible to live this way?

I think it is! I don’t know why. I haven’t figured it out, but I’ve really thought about it.

After playing her do you have a new perspective on this 'we’re going to have a beach street party' lifestyle?

No! I’m not interested in going to them or throwing them! It’s just too much energy.

How do you work and live and also have ‘beach street’?

How is anybody that age, unless they’ve got money coming in from somewhere else, not working their ass off? You have to work so much harder these days. Forget living in Manhattan, but even living in Brooklyn. How is this happening?

I like that the movie asks that question. I also think its asking questions about monogamy and marriage. How do we have a marriage now? I’m curious about your marriage with Jamie in the movie.

I think they just get each other and then they don’t think about anything past that. I like to hang out with you. You like to hang out with me. Cool, let’s get married. Why not? They just love each other and it’s that simple. They don’t think of the consequences. That’s what’s weird. It’s nice for a little while, there’s naivety in that, but unfortunately no matter who you are there’s always consequences and they get worse and there are more of them as soon as you get older. It’s just so simple for them. They’re partners in business, partners in crime, partners in life...until they’re not anymore. That’s simple too. Divorce is simple.

They’re just not that committed to anything.

What is that? Does that pertain to that generation Z or Y?  Being noncommittal? I’ve heard that thrown around a lot.

Maybe? The more committed you are to something the more vulnerable you are. There are so many pitfalls to it. But it’s not really a pitfall in the long run. It’s something that you need. You need to be vulnerable in order to grow. I’m so glad I’m over that part of my life! I really do feel like I’m ready to be thirty! God! I see everything in such a different way.

What things do you see in a different way?

The idea of marriage. I see it in people that I’m friends with as we’re growing up and people are getting married and having kids. I see that marriage is so much more than being in love with somebody. There’s so much more to it. A lot of people make the mistake of just settling. A friend of mine, we were talking the other day, and he’s just gotten back with his ex. I have this really awful feeling he’s going to give her a ring and waste her time. I’m just like but you don’t like her!

But you feel like you need to be with someone?

So you’re going to ruin her life and yours? If you want to get out of it, you have to get divorced as well. I just take it a lot more seriously. Life is not about that feeling you get when you first date somebody.

Did you feel like then on set that you and Adam were more like Ben and Naomi’s characters than your own?

Definitely. I think we can all relate more to Josh and Cornelia.

At the end of the film when they’re sitting outside on the steps drinking alcohol out of a bag, Cornelia says something like, ‘I thought by now we’d feel older.’ You’re saying you feel wiser, but do you still relate to feeling not old enough?

It depends on the day really, who I’m with, what I’m doing, my reaction to something. I’m more consistent than I used to be in terms of reactions and how I behave. I don’t know. It changes daily. I still have that in me. My head turns when I realize I’m not the youngest person in the room. But it’s a nice feeling.

I love the parallels and differences between these two couples in the movie. I haven’t seen it done in a while. What did you learn working with Ben and Naomi?

The one thing that I did take away that I really love is that no matter how long you’ve been working, there’s still an intimidation factor when you’re starting a new project, you want to give it your all, you want the right things to come through. Teamwork is the most important thing, respecting everyone’s space and time. That never gets old when you work with good people. No matter how old you are, how many movies you’ve done, it’s still the same ballgame. The most important thing is to be grateful and professional and have fun with it. I just got finished working with Alan Arkin. I just can’t believe he exists!

I watched Edward Scissorhands the other day and he’s the dad in it!

He looks exactly the same.

I know! I have to tell you I’ve learned, in three, four weeks with him, I’ve learned more in my entire career, I also read his book, which is like a bible for actors and people just in life general.

Is he just spilling wisdom? What is he like?

He’s very enlightened. I’ve never been more inspired in my life from being with anybody. Again, no matter how many movies you’ve done, there’s always the right way to go about things, really grateful for that job and appreciate the teamwork that exists. We had to play opposite each other and there’s no age in this town! There are those ageists and there will be a time where it will be harder for me to get work, no doubt about that. But for the most part…

Yup. Beyond! So does Ben, so does Julianne Moore…I can just name a bunch of people.

I mean your reputation is almost half of it I think, it goes along way. You have to be glad about stuff.

Reputation is in this movie too. Adam Driver has said he couldn’t judge his character and it was really hard for me not to judge Jamie’s views as well on morality in art.  He doesn’t care about his reputation as long as he achieves. Have you ever been at a crossroads where you choose your reputation over achieving?

Having children is something that is definitely important to you?

Yeah, I think it’s important in general. Someone said to me recently, ‘There’s a level of guilt that people have about procreating.’ I think about it all the time. Why bring another human into this world? Apparently California is not going to have water in a year! Florida is going to be in the ocean in a couple years! ISIS, all these these terrible things…it’s just a terrible world. But then, this person like Douglas, my makeup artist, he said, ‘But if you’re a good person and your partner is a good person, you’re creating a good person. Isn’t that better for the world than not creating anybody at all?’

And maybe, in turn, it probably makes you better and stronger.

Definitely it’s a selfish thing too. Selfishly, I think it would be a wonderful experience. For the greater good, I don’t think it’s taking away by adding.

You haven’t played a mother yet! Have you?

Right! I saw the trailer!

I can’t wait to play a mother! So fun! I’ve played a bride enough times.

I want to see you play a mom or a superhero.

The one thing I’ll never regret...I turned down a role where I would have to go to hair and makeup for three hours everyday and be painted green. Honestly, I’m so glad. I didn’t want to live in London for six months and be away from him! [She kisses her dog].

That’s you choosing lifestyle over ambition.

Yup! So what it made a trillion dollars? So what who cares. We don’t care!