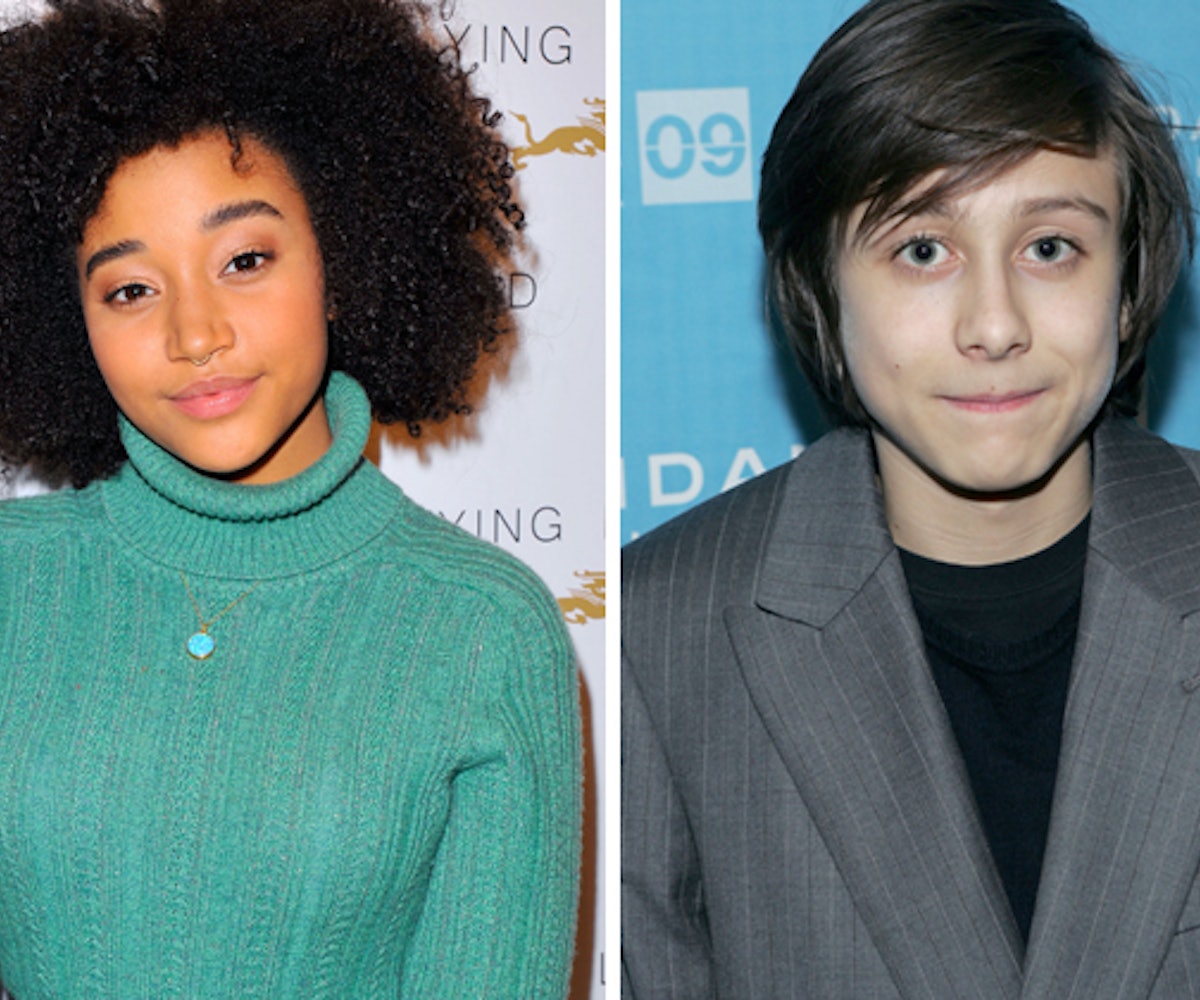 Photos by Lily Lawrence and This Robinson/Getty Images.

The Sundance Acura Lounge is a far cry from the globetrotting press tour Amandla Stenberg was sent on for The Hunger Games, but then again, the 17-year-old activist and artist is hardly the girl we met as young Rue. Stenberg was at Sundance for her newest project, the grungy indie film As You Are, which she stars in alongside Owen Campbell and Charlie Heaton. Together, the three best friends bond over their collective outsider status, and wherever there's suburban ennui and angst, there's bound to be some drama. As You Are centers on a crime in the woods and an ensuing investigation, but it also touches on issues of sexuality, domestic abuse, and other hot-button teen topics. Stenberg and Campbell met with Nylon to discuss their collaborative indie movie effort, as well as Internet feminism and film school.

So, tell me about your movie.

Amandla Stenberg: The movie really explores themes of alienation, especially in suburban environments, and how teenagers kind of find their identities through their friends, and they explore themselves, their sexualities, their interests, and their passions through their friends by spending time with them and going on adventures. So, there's a lot of adventure-having in it, and then of course it does turn a bit darker because of this oppressive environment that it takes place in. The movie explores a lot of themes around sexuality, love and friendship...

Owen Campbell: As well, I think, abuse and violence.

The filmmaker, Miles Joris-Peyrafitte, is really young as well so that must have helped to have a kind of comforting environment where everyone feels safe to talk about things they've gone through.

For sure. That's what was really special about the production, is that it was a bunch of young people coming together with a huge passion for filmmaking and a desire to create art, and that's what felt so special for me.

It was the first time I've ever worked on a film where pretty much exclusively we were all peers. Some of us had more experience, some less, but we were all around the same age; we were all hungry for the same thing. It felt much more like a family making this project. I've made films I really believe in, but never have I been on a film where [there] was such a closeness between cast and crew and everyone. We lived together, we laughed together, it was wonderful.

Absolutely. Honestly, I feel like a really important part of this production was authenticity, and us trying to make it feel as authentic as possible. So there was a lot of intricate character work that led to us trying to create this really genuine feeling that viewers could connect to.

How did you guys go about that?

Well, we did a lot of discussing about my character and where she's coming from. So, my character's adopted. In this suburban neighborhood, she's like one of the only black girls, and she has white parents, and so she feels kind of alienated, or at least she feels like a part of her identity, she's grappling with. Miles and I talked a lot about how that component of herself drives her to befriend Jeff and Mark, who are also these outsider skater dudes. We did a lot of discussing around those themes and just understanding why we would become friends, why we would have such a love for each other and why we would want to spend so much time together.

On a lighter note, how are you finding your first Sundance?

It's pretty bomb. I'm having a fantastic time. I actually haven't been able to see any movies because we've been so busy with press, but that in itself has been really cool and I'm just happy to be around filmmakers and friends and the fact that those two words are kind of synonymous with each other now.

It's a really awesome place to meet everyone—other writers, other people, other women who do what I do...

I was wondering what kind of pressure you might feel to be constantly politically on point or you know, just under scrutiny?

You know, I'm a teenager, so it's inevitable that I'm going to make mistakes, and unfortunately everyone's going to have to realize that. [

I watch how we build up women, like Jennifer Lawrence–we build them up and build them up and all of a sudden, we're like, 'Ugh, we're over her. How dare she complain about not being paid enough, whatever, all this stuff.' What is that about? How does that make you feel?

Yeah! I mean, that's totally an interesting complex that definitely happens with young actresses in particular, where it's like we hype them up so much that we get sick of them. I remember at one point I was on Tumblr or something, and I wrote, 'You guys are saying my name so much I'm getting sick of seeing my own name!' It's unfortunate. I think it has a lot to do with the fact that we're women, and a lot to do with how people value our thoughts, and unfortunately for a lot of young actors and women, our thoughts are only seen as valid when we're popular, in popular culture, which is really stupid… I've accepted that. I know that people are going to not like me sometimes and then like me again, and they'll like me sometimes and then not like me again, and all I have to remember is just to stay true to who I am and to continue talking about things I want to talk about.

I think what's so fascinating about the Internet is that it gives anyone a platform, and that can be incredibly toxic, but then you have someone like

Janet Hubert, who was on The Fresh Prince,

who made a video and was talking about the Smiths, and it was like, wow, she just got on her laptop and decided to talk about stuff.

Yeah, and that's what's so wild about the Internet. Which, of course, there are cons to it, but I think there are so many pros that the Internet is really important in that way, in terms of giving people a platform who would not get it in mainstream media, myself included. I feel like if it were not for the Internet, I don't know where I would be at this point, because there aren't enough roles for African-American women; there's not enough platforms for African-American women. The Internet has become a tool for us to claim for ourselves.

What else are you guys up to? What have you got planned?

Amandla's a filmmaker. She also writes and directs film.

shortly, probably after you publish this article, so look out for it.

I'm going to be like, here it is! I just like sharing my art with people, so.

Tisch. A fine institution. I just saw a movie there that is here at Sundance, How to Tell You're a Douchebag. I think they all went to Tisch.

Yeah! I met the producer for that. He was like, 'Yo! I can't wait to be your mentor,' which is so dope.