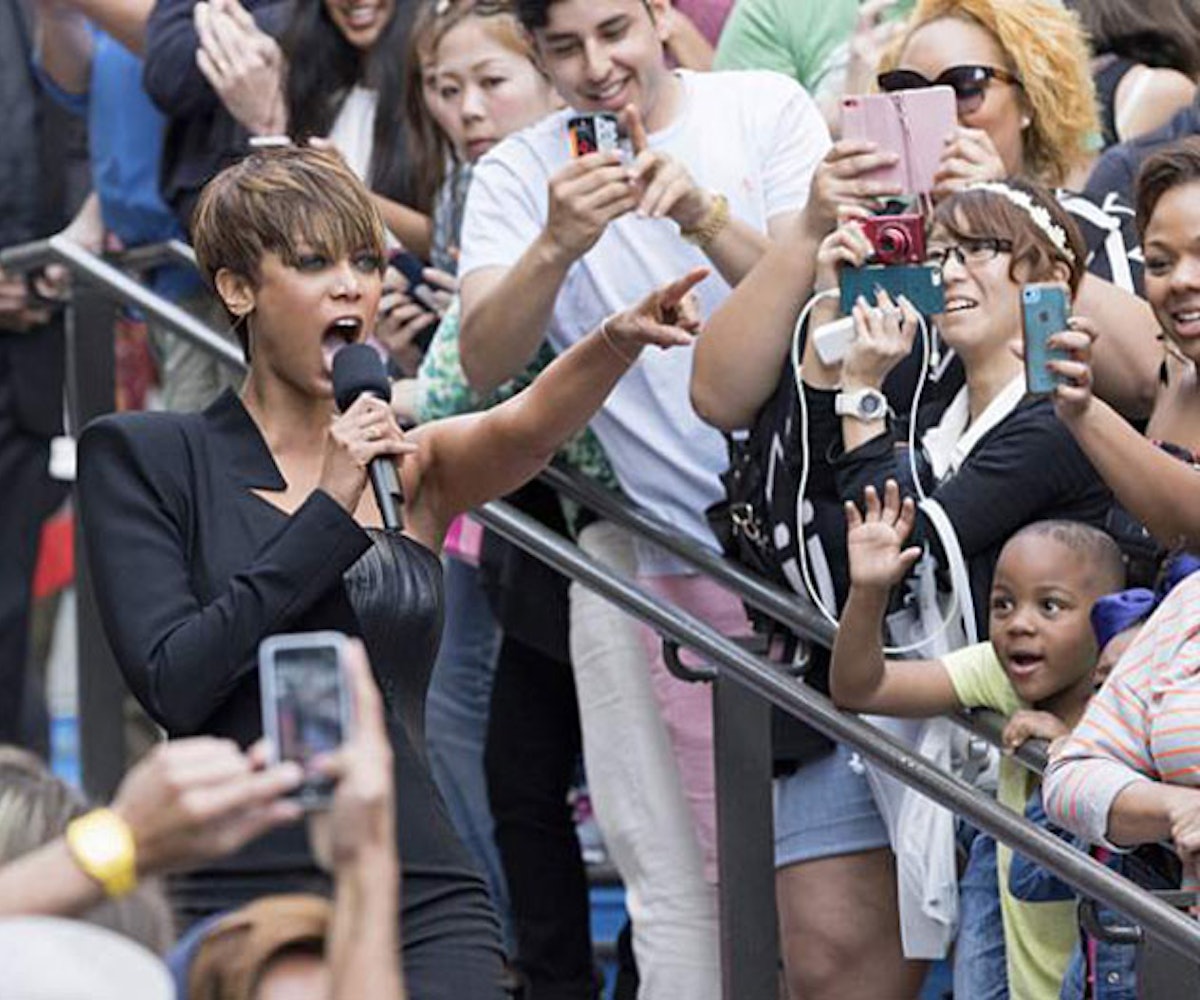 How bomb is the cast of America’s Next Top Model Cycle 22? The season premiere set this season off right! The competition is rough and the models are fierce. And there is something extra-special about this cycle. Not only are male models and female models competing, but Tyra stomped on the height requirement. Yep, that’s right: for America’s Next Top Model Cycle 22, there are NO height requirements. ANTM has models of all shapes and sizes this cycle, baby!

The first photoshoot was a hectic day. All the models were thrown on a bus together and we finally got to sniff out—I mean—meet our competition; 31 models all dying to make the cut and make it to the top. I’m an 18-year-old virgin with no experience with guys, and I come from a small town called El Dorado, Arkansas. (Yes, for all of you wondering, we do wear shoes in Arkansas.) Coming into this competition at such a young age, I was nervous about how I would compare to the other models and I was nervous about being around all the guys because they’re hot.

To start off, all 31 of us climbed onto a huge double-decker sightseeing bus to have our first photoshoot. As always, time is precious and each of us only got about 10 frames. These 10 frames were do or die. Make your mark and smize your eyes, baby, because if you don’t, you’re sent packing.

After the rush of the shoot, we pulled up to one of the most popular places in Los Angeles: The intersection of Hollywood and Highland in front of the Chinese Theatre. There, we met the judges: Miss J Alexander, Yu Tsai, Kelly Cutrone, and Tyra Banks, herself. This was our first red-carpet runway! We were told that it’s our time to strut down the runway with a partner. It’s hard enough to work well on your own, but with a partner—and crazy fans screaming at you and waving signs in your face—it’s madness! But being the smart cookie that I am, I kept my composure and fierceness, and I slayed the runway. Some other models (bless their hearts!) weren’t as fierce. People were flexing, dancing, Tangoing, flipping their hair, and trying to steal the spotlight—which did not work to their favor. The judges didn’t just blink and didn’t let it slide; they had plenty of criticism.

So with our first photoshoot and runway checked off the list, what could be next? Critiques. My first impression and critiques with the judges went well. The judges said to improve my photo; I needed to lose the tension in my neck and not hunch as much. I was also asked about my life back home with my family. At 12-years-old, my family went through an extremely hard time. When I was 15, my parents divorced. I was devastated. I was a young, teenage girl that lost my mom as a best friend. Times were tough and I needed her! As a result of this stressful time, I gained weight. But after two years, I got back up, lost about 35 pounds, and now have the best relationship with my mom.

Other contestants went more in-depth about who they were, as well. Hadassah [Richardson] is a Texas pageant girl; Mamé [Adjei] is a diplomat’s daughter; Bello [Sanchez] is a sassy king with exotic eyes; Justin [Kim] is the first Asian-American male contestant; Nyle [DiMarco] is the first deaf contestant; Ava [Capra] is a flower child, Courtney [DuPerow] is a 5’3” model; Bryant [Wood] is confident and a Ken Doll lookalike; Dustin [McNeer] is 18 years old—just like me.

Sadly, as the stories were being told, harsh words were thrown—and crowns started being broken. That’s not something you see every day! Stefano [Churchill] really started stirring the pot when he threw shade at Alexa [Everett] for having fake boobs. A little bit of hell broke loose as all the girls started defending her—especially Hadassah [Richardson], who has fake boobs, as well. Bello’s crown was being passed around and was broken by two of the other contestants. I don’t handle arguments very well—I usually laugh, eat popcorn, and observe (in this case, I was laughing!).

So, how in the world can you cut 31 models down to 22? The Top Model way, of course. In order to figure out if made the cut, we had to go diving for balls...in a foam pit. If you found a beach ball with your name on it, you slid right on by to the next round!

I was over the moon when I found my beach ball! My nerves and adrenaline were pumping. Now there are 22 models left in this competition, but there's still another cut to be made. Who is safe and who is going to be eliminated? Who has the jokes and who brings the drama? Who has the Top Model potential and who falls flat? Find out next Wednesday at 8/7c on the CW Network to find out, and pick a model to root for in the meantime. By the way, the #teamlacey #laceyantm wagon is always open with warm hugs!