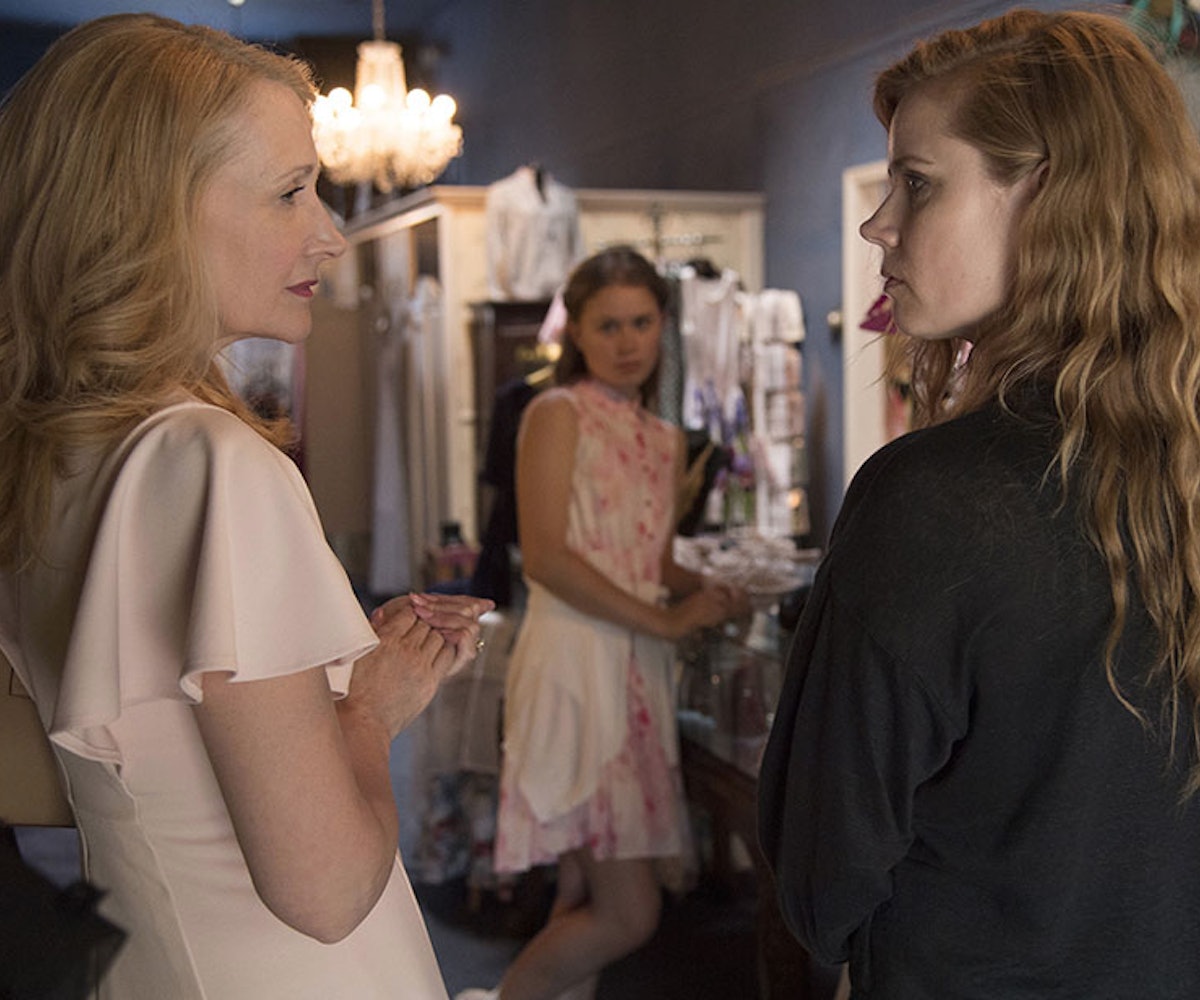 There's a strange sonic hallucination that happens as Camille Preaker (Amy Adams) navigates her way through the thorny environs of Wind Gap, Missouri, in HBO's pitch-perfect Southern Gothic series, Sharp Objects: the dulcet tones of every woman she meets, all of them murmuring, "Bless your heart" can be heard—felt, even—echoing everywhere; getting stuck in the sultry air; trailing behind Camille, clinging to her wake.

Those three little words—"bless your heart"—are, as Camille explains in the series' second episode, just a Southern way of saying "fuck you," and even though they are not being said to Camille, there is little doubt that they are exactly what every Wind Gap woman who sees Camille is thinking; from her mother to her high school frenemies, virtually every woman in town bristles at the sight of Camille, preparing for an inevitable confrontation.

And their reaction is understandable. It isn't just Camille's presence in Wind Gap that's a threat—although, her role as a reporter investigating a series of murders does implicitly jeopardize any inherent stability within the small community. Rather, it is Camille's very appearance which serves as a refutation of everything a Wind Gap woman—specifically one who comes from old money—is supposed to be: refined, polished, a pastel-hued confection of a person. Camille is none of those things. She is sweaty, the stink of alcohol seemingly seeping from her skin; she wears all-black clothes that cover up every inch of her body, revealing only her fingertips, neck, and face, making her more of an apparition than a human being.

Then there's her hair. While every other woman in Wind Gap sports the same hairstyle as... every other woman on TV, a look which Racked's Julia Rubin wrote about in 2016, noting that it "is the kind of hair that does not occur in nature," and "is entirely artificial, heat tool-engineered for your viewing pleasure," Camille's hair is a wild, curly mop that she tosses back and forth at whim. It's an air-dried statement in a blow-dried world. And its beauty, particularly when juxtaposed against the ultra-manicured coifs of the other Wind Gap women, is a reminder of Camille's singularity in a world of conformity and skin-deep gentility. It's no surprise that Camille's hair is treated as the threat that it is by her sister, Amma (Eliza Scanlen), who, in an act of aggression, rolls a just-licked lollipop around Camille's hair, leaving Camille to untangle the sticky mess. Amma is one of the most composed characters on Sharp Objects, she leads a clearly dual life, acting one way in the presence of some people, and another in the presence of others. It's no wonder that Amma would lash out at Camille's hair, whose wildness symbolizes the freedom that Amma doesn't have.

Camille's hair also speaks to a larger dismantling of an aesthetic that has dominated pop culture for years now, seen everywhere from reality shows like The Bachelor and The Real Housewives franchise to fictional shows like Big Little Lies and Jane the Virgin. This look, as deconstructed by Racked, opens up the face and is almost universally flattering, even if it does often veer toward "beauty pageant contestant and/or a (cool!) Texas mom." What this look also is, though, is necessarily constructed; nobody's hair cascades down from her crown in perfectly face-framing waves. This look is one that is earned, one that took work, one that says that its bearer cares about herself in a very specific way.

Camille's hair, meanwhile, looks like she only occasionally remembers to wash it, like she doesn't care about framing her face, and instead just wishes she could use her hair as a curtain to hide behind. Her hair speaks of long nights out and late mornings in bed. Her hair begs to be touched; it's impossible to mess up because it's already a mess. Her hair serves as a reminder that there are more important ways to spend an hour than manipulating one of your most prominent physical features into a type of submission. Her hair, then, is a reproach to all the other women's hair in Wind Gap. It is a whisper-soft confrontation, a silent revolution of sorts. Because whereas every other Wind Gap woman's hair serves as a mask, the follicular equivalent of saying "bless your heart," Camille's hair shows that she doesn't care about their standards and styles; Camille's hair is here to say: Fuck you.