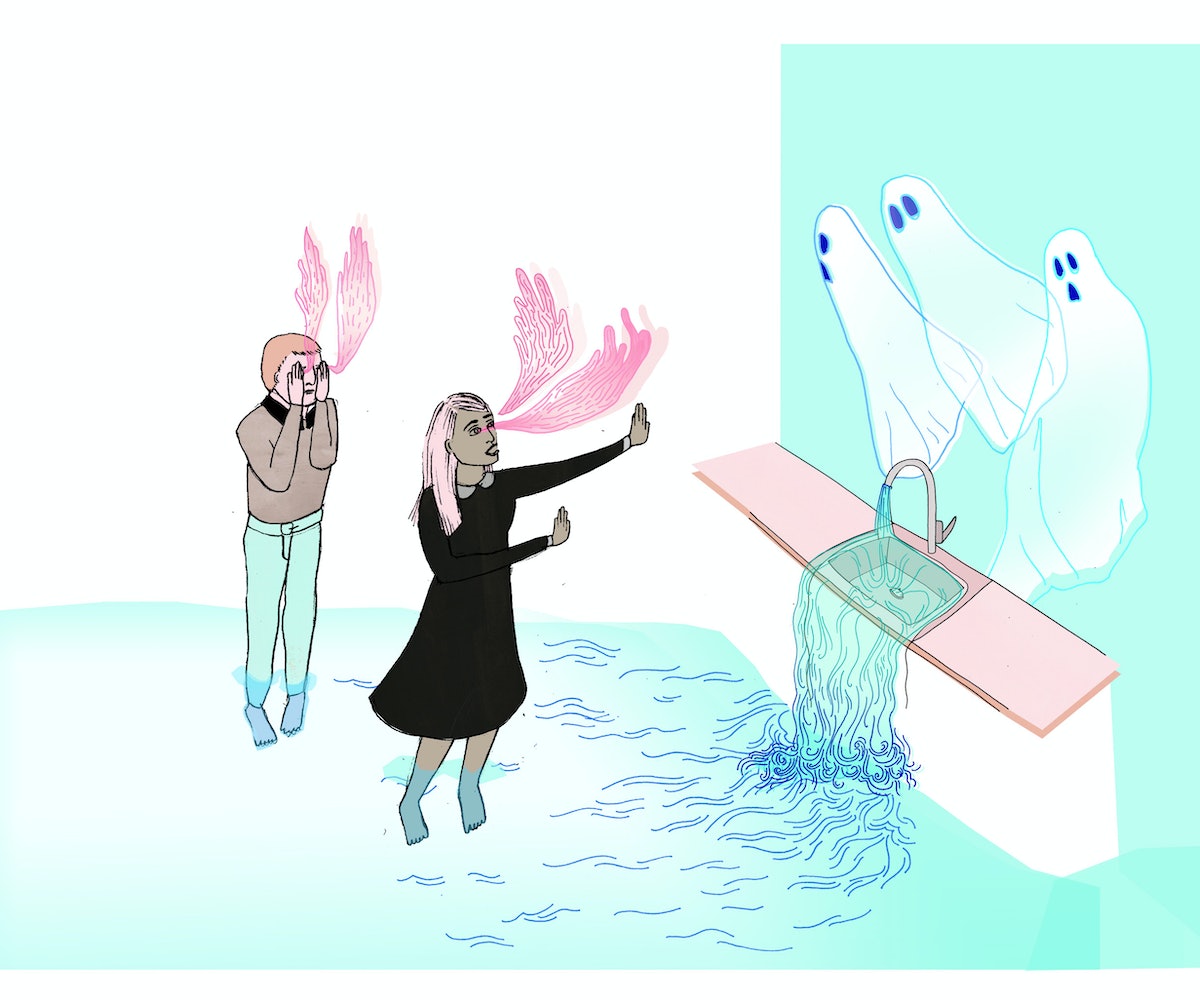 New York City living can be the most thrilling and gratifying experience a young person can have. However, when you get 11 million people in one place simply trying to make due (plus exorbitant, always-increasing rent), things begin to get weird. After realizing that our friends and coworkers tell some of the craziest, most absurd living situation stories ever, we tasked our amazing Digital Design Director Liz Riccardi to illustrate how exactly these crazy tales may have gone down. The result is a couple hilarious pictures and some truly terrifying—and totally true—New York City apartment nightmares.

Add yours in the comments—New York or not—and perhaps we'll illustrate 'em in the next edition.

"I once had a bathroom sink that had a maggot infestation. Whenever the water was running, they would squiggle up from the drain like tiny noodles from hell. We tried everything to get rid of them: bleach, Draino, boiling water. They'd disappear for a day or so and then reemerge. The super said there was nothing he could do about them. They lived in the sink for the full year that I lived there. Eventually I grew to think of them as my frenemies. I wonder what they're doing right now."

"I had been living in NYC exactly one year when I made the big move from Brooklyn into Manhattan. My rent was 50-percent higher and my apartment was a quarter of the size. My floor had five apartments, and I made friends with my neighbors pretty quickly.  We were all around the same age and chasing a dream. There was me, an editorial assistant at a magazine; my fabulously gay neighbor, a TV publicist, who dressed himself and his Chihuahua in matching shirts; a struggling actress by day and waitress by night, who always had a revolving door of guys staying over; a Kurt and Courtney-type couple with a toddler—he was a graphic designer, she was a photographer; and a quiet philosophy major, who could surprisingly really throw back tequila shots.

Months later when the aspiring Plato moved out to go to grad school out west, a straight-laced couple in their 30s settled in: an accountant and a banker, who downsized in order to save to buy a place in the burbs. The very first night they moved in, I could hear every moan, groan, and yelp as they had sex. This became their thing. Every night at 11 p.m., like clockwork, I got to hear the grunts, the giggles, and what I could only imagine was the sound of ass-slapping. My bed—which would only fit into my tiny bedroom one way—was positioned on the same wall as their bed! So every time they got it on, my full-size bed moved further and further from the wall with their every thrust.

Over the next few weeks, all my neighbors noticed the 11 p.m. fuck appointment, and I gradually spent more and more nights out. After some coaxing and many, many drinks, my neighbors convinced me to put a note under the couple’s door before going to work the next day. It was discreet, only saying: 'The walls are thin here. Everyone hears everything, especially at 11 p.m.' But just as I was slipping the message under the door, the male half of the couple flung the door open on his way out (Why didn’t I wait till 11 p.m. to slip it under the door? Stupid! Stupid!). He saw me, then the note. While my face was probably 50 shades of red, I could tell he was completely unfazed. Instead of being mortified like I was, he made an off-color joke about how maybe I’d like to join them in a threesome sometime. I laughed uncomfortably as I rushed down the stairs, thinking the faster I went, the faster the conversation would be over.

After that, I was home sick with the flu, and for an entire week of 11 p.m. appointments, instead of screaming out each other’s names, they screamed out mine. I’ll never know if they were actually having sex (which would make it super-creepy), or just completely messing with me (I like to think this was the case). But it soon became the running gag in the building. When I’d run into people from my floor at the mailboxes or the trash shoot, instead of saying, “Hi, Patty,” they’d say it in their best porn star-worthy sex scream—and I'd blush every single time."

"'A friend' once came home to a trail of blood drops and smears zig-zagging and looping around the whole apartment, ending at to two bloody tampons on the floor of the kitchen. No roommate claimed responsibility. Super gross."

"A friend's ceiling caved in from water buildup, thus flooding the entire apartments and leaving huge holes to the floors above. Two seemingly straight-edge upstairs neighbors went on a psychedelic bender, turned on all of their water faucets to 'protect them from ghosts' (yes, this is their reasoning) and flooded their apartment and two floors of other apartments on purpose. It was like an anti-drug commercial."

"So when I was bussing up from DC and doing my first round of apartment hunting in Brooklyn, my future landlord tricked me into believing my roommates were going to be 'young professionals' with normal 9-5 hours.  Maybe it was the bottomless brunch party I had just stumbled away from at Il Bastardo, or maybe it was the young landlord's model-good looks, but I 100-percent took his word for it and didn't feel the need to meet the rest of my 'young professional roommates'. Apartment hunting when you aren't already living/crashing on a friend's NYC couch can be tough, and I wanted to settle on something quick. Plus, the apartment had a washer and dryer plus three balconies, and that's pretty much hitting the jackpot here.

Fast forward to move in time—my roommates were three guys, two of whom are in their mid 40's. One was a middle aged 'artist' who liked to call me Rapunzel (I lived at the top of the apartment and have long hair) and definitely didn't work 9-5, or at all, if that.  He would leave out his leftover medium-rare steaks overnight, letting meat juice stain my plastic cutting board, scatter beer cans, and liquor bottles everywhere, and invite college-aged girls over for loud midday weekend trysts. I kept trying to figure out what he really did, and then one day I had my answer.

'Rapunzel, can you keep a secret?' Middle-aged artist asked, while in a drunken-high stupor, touching my hair.

He proceeded to tell me that he was the son of a famous attractive 1950's Hollywood actor (whose name i'm leaving out, because you've

heard of him). His mom was also a famous film actress and still acts on Broadway. My next logical internal dialogue was, 'Is this true, and how did this guy end up so sketchy?'

Obviously, I ran upstairs to my laptop, Wiki'd his dad, found him in the 'family' section, and googled him.  Sure enough, the first thing that popped up was a mug shot of my roommate and an article about how he had been arrested for transporting 40 pounds of marijuana in a pickup truck 'on the way to a funeral.' Oof."