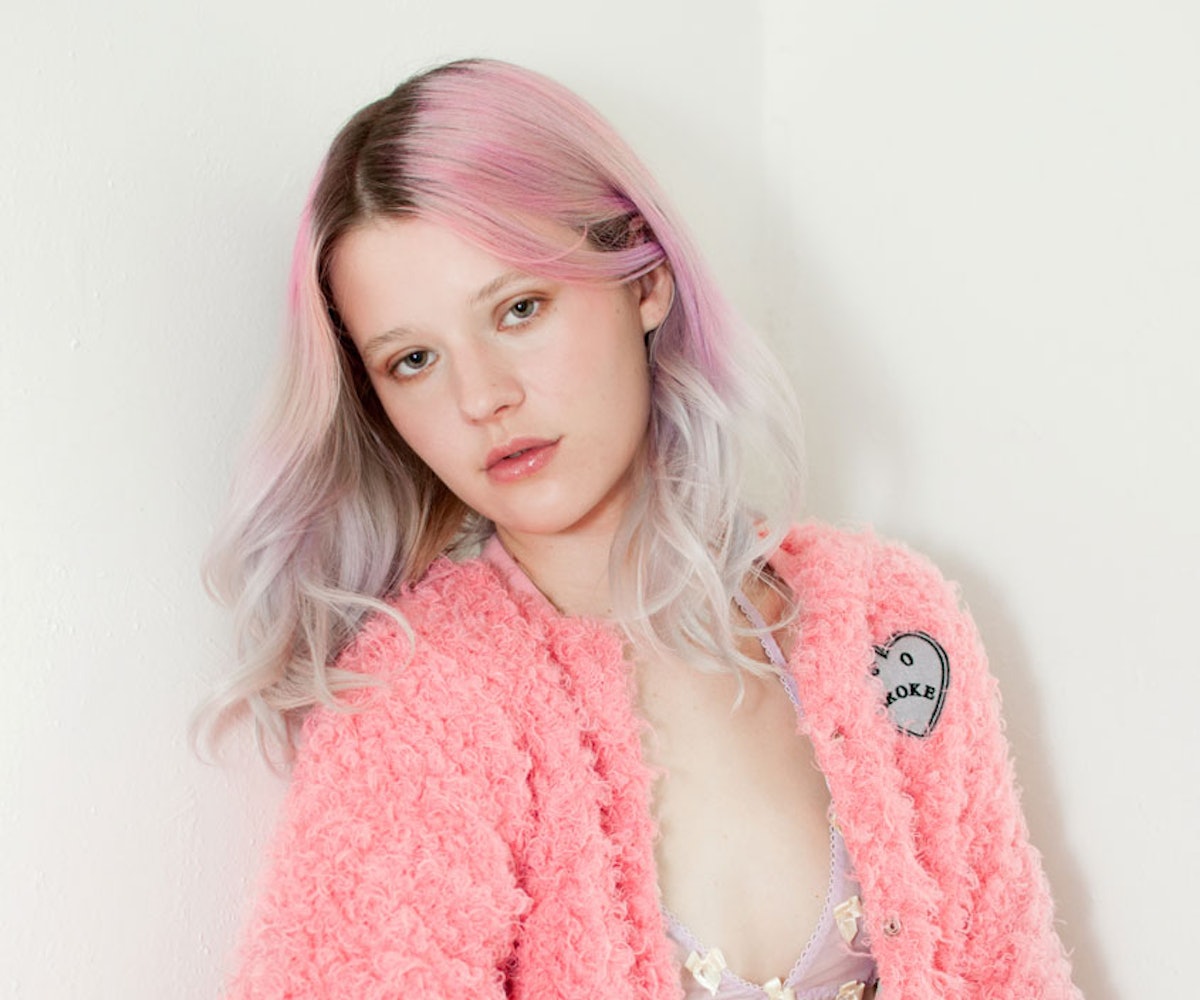 Arvida Byström and I are talking on Gchat, the interview method the Swedish-born artist and model prefers despite being within a two-mile radius of me in Los Angeles’ Echo Park. She types: “I grew up w internet, i spent loads of time there. im never without it really. it’s like when something is your home.” I don’t know what expression she is carrying on her face, or what drink she is potentially sipping—but in the comfort of online intimacy, I could easily ask anything.

Byström, 23, has spent the past two years in London, and just recently moved to L.A. where her girlfriend resides. In her own words, “I like cycling so good weather is dope/in london my butt is constantly wet from the rain + bike.” Her typing cadence and use of extra letters to portray enthusiasm in words like “yesss” has an undeniable charm.

Presenting feminist discourse through art, Byström’s photography and video work address themes on sexuality and identity. Her career started with taking self-portraits at the age of 12— “I didnt dare to shoot anyone else for yeaaars cuz i was scared ppl would tell me i did something wrong.” Her fears eventually subsided, resulting in work such as “There Will Be Blood,” a photo series she shot for Vice in 2012. In it, young women are depicted in various situations with blood splotching their panties—their faces nonchalant about the ordeal. “The whole thing was my initiative and i wanted it to be neither gross nor pretty. just ppl getting their periods,” recalls Byström.

Around this time, she also did a series on body hair, highlighting women who have no problem flaunting their arm, leg, and pubic hair. “It’s still a norm for women to shave and that is fucked,” she types. “It’s wack that there is like no discussion about it when u r like 12/13 about why u start or not.” And somehow, as a model, she has been able to get away with not removing her body hair. Byström first modeled at age 13—and worked with multiple agencies in Sweden until she was told her hips were “too big.” “I felt horrible about it but then I got into feminism, quit modeling, and felt great about my body,” she explains. “There is no such thing as ‘big hips’! all hips are great, all bodies are.” She started modeling again when she moved to London, seeing it as a way to support her art career.

Recently, Byström has been making electronic music, and plans on producing videos to accompany her jams. With some distance from her early projects, she is now interested in tackling feminist topics with more subtlety. “Like idk when i did the period and hair shoots years ago i was new in feminism and something confronting like that felt right/now i am a few more layers down.”

A couple of hours into the conversation, our chat is winding down, and I wonder if Byström is as distracted by the Internet as I am. With the pauses in our conversation, I suspect so. Yes, it’s impossible not to notice incoming emails, or get allured by a second, third, or 13th tab on one’s browser. Byström tells me her “gf is gettin annoyeeed” and she has to run to the grocery store. “What grocery store are you going to and what are you going to buy?” I ask. A beat later, she types: “Was the grocery thing a joke or not. irony through chat is hard.”

With that I bid her, and the ellipses of anticipation, farewell.