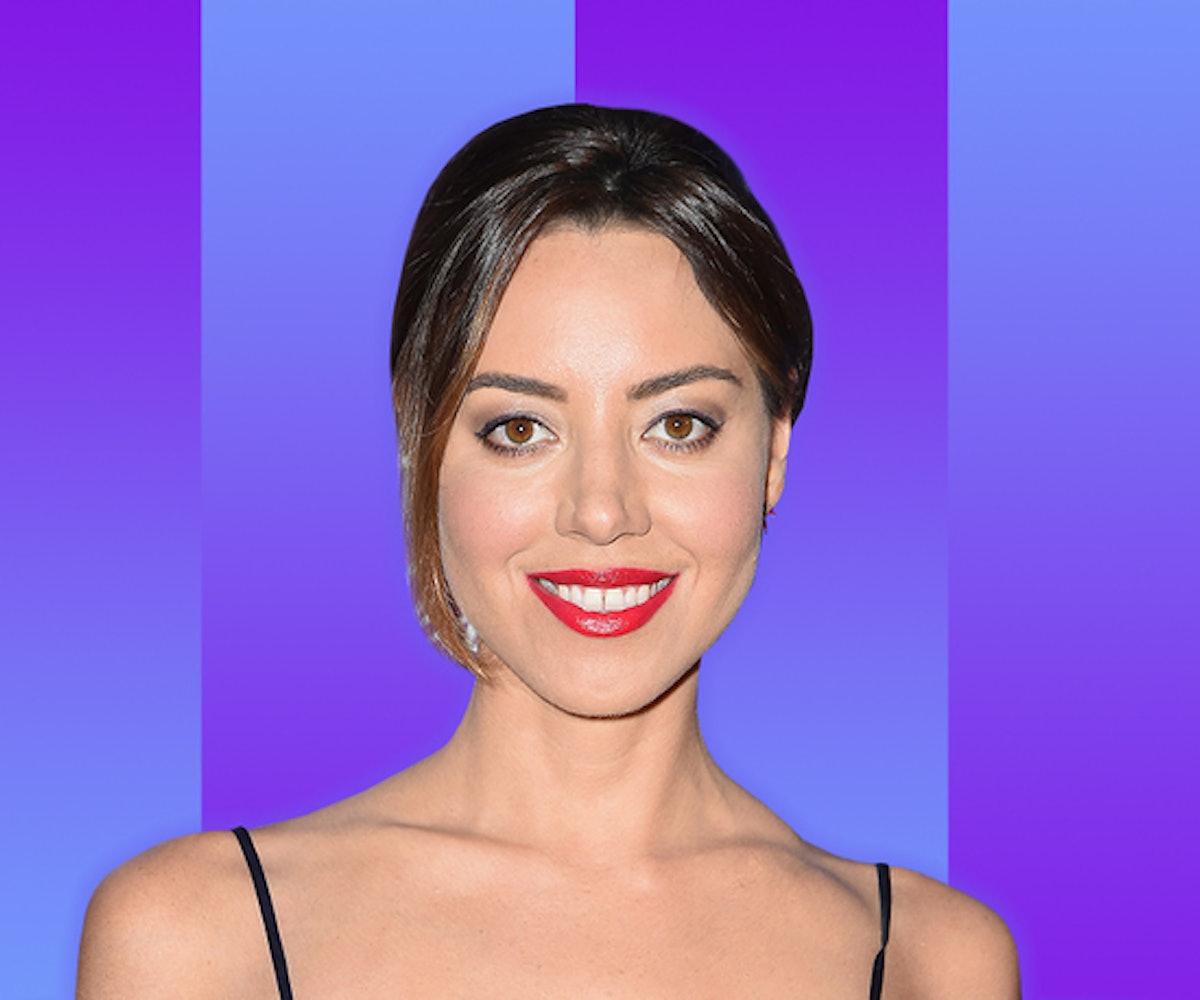 Aubrey Plaza is the Queen of Deadpan, an actress best known for her sulky, sarcastic turn as April Ludgate on NBC’s Parks and Recreation. In reality, Plaza is plenty expressive—just dry-humored and a little awkward. She took steps to shake the typecasting with a role on FX’s Legion earlier this year, portraying the evil and seductive Lenny, a character much wilder than anyone on Parks and Rec. And now, with her starring turn in Matt Spicer’s black comedy Ingrid Goes West, Plaza has left April permanently in the dust.

With nods to classic stalker flicks Single White Female and The Talented Mr. Ripley, Ingrid Goes West updates the story to reflect obsession in the digital age. Plaza stars as Ingrid, a young woman who moves to Los Angeles intent on befriending a beautiful Instagram celebrity, Taylor Sloane. Played by Elizabeth Olsen, Sloane has the seemingly perfect profile: She knows the right hashtags to use, brands to collaborate with, and angles from which to photograph her boho-chic ensembles. Her #DesertVibes aesthetic is emphasized during frequent trips to Joshua Tree and in the muted colors and cacti décor of the home she shares with a hipster artist husband. Ingrid falls for Taylor’s carefully curated lifestyle hook, line, and sinker.

Plaza goes to dark places with Ingrid, a character who is not only dour and self-destructive but also mentally ill. While her attempts to become Taylor’s bestie grow increasingly dangerous and disturbing, we can’t help but identify with Ingrid’s lonely longing to be cool. Plaza breathes the right amount of spunk and humor into the role (plus a dose of great physical comedy—watch for the scene where Ingrid saunters up to Taylor in a bookstore). This is a heroine who exists outside the artificial constructs of social media, despite her best efforts to join in. We spoke to Plaza about why she went cold turkey on her personal Twitter account, her new role as producer, and what emoji she’ll never use.

You’ve had a mixed relationship with social media. You quit Twitter for a while but recently came back. What happened there?

I got off at like 11:55pm on New Year’s. So there was an element of a New Year’s resolution to it. I think I got to a point last year, especially amidst the election and all of the political stuff going on, where it started to feel more negative than positive. Whenever I would go on Twitter, it ended up making me feel bad. So I thought I’d get off. But it turns out, you can’t actually get off. It takes a lot of effort. They make it hard, which is kind of creepy and scary. You can’t get off Twitter for like 12 months or something; you can deactivate your account, but it’s not deleted. They keep it alive for a year. And they constantly send you emails going, "Are you sure? Your friends are saying this. You’re missing out on this." It’s really enticing. You feel like you’re being left out of something that’s happening in the world. So I did get back on, and I also got a public Instagram at the beginning of this year. Truthfully, because I had two movies I produced that were coming out, that I was excited about, and Lizzie [Elisabeth Olsen] and I both had a different feeling about Instagram after we shot this movie. It opened us up a little about it; we realized that yes, there are negative things, it can foster toxic behavior, but it can also be a fun way to connect with people. So, I don’t know… It’s complicated, as Facebook says.

Why did you pick "evil hag" for your Twitter handle?

When I first signed onto Twitter, it was a long time ago, probably almost 10 years ago. That’s why I got that handle—I was super early. I had a comedy blog—this was way back when people had Blogspot—from the point of view of a sea hag.

Yeah, like an ocean witch. It’s a kind of character I had in my mind that I thought was really funny, so I would write jokes in her voice. And Twitter was just an extension of that for me. I thought it was boring to have your own name. I also wasn’t famous at the time, so I never thought I’d have any followers. That was a personal account for me to try out jokes on. When I become more of a public figure and I was verified, I didn’t change it.

Most ordinary people compare themselves to peers on social media, and it can be a detrimental habit. Do famous people use social media in a similar way? Do you compare yourself to other actresses?All the time. Always. Constantly.

Who is then your Taylor Sloane?I’m not just saying this—Elizabeth Olsen is genuinely the coolest person ever. Now that she’s on Instagram, she has somehow even found a way to make that cool. I can’t do that. She posts things that are so her and funny, but also she looks amazing. It’s got everything. I follow weird people… like Michael Keaton and Tom Hanks. Susan Sarandon, I love all the stuff that she posts. And Laura Dern.

You mentioned Janeane Garofalo on Jimmy Fallon the other night. Why was she such a big influence on you? She was the first stand-up comedian I ever saw live. I’m pretty sure it was in Pennsylvania. I was obsessed with her and that movie, The Matchmaker, and Reality Bites, she’s… everything. I loved her sense of humor and how she had such a confidence and authenticity that I wasn’t used to seeing.

Your Ingrid Goes West role is very dark, almost verging on psychotic. What did you find empathetic about Ingrid?I thought it was really relatable, that feeling of wanting to have a friend, to be liked. Ingrid is a depressed person that’s shut off to herself and the world. Someone like that, who has Instagram and social media and uses it in unhealthy ways, was interesting to me. Most people have self-control; they can stop themselves when they’re going down a cyber-stalking hole. Generally, healthy people can say, "Maybe I’m spending too much time on here. I don’t need to be stalking my ex-boyfriend’s current girlfriend." Ingrid is like a personification of our worst impulses. There’s an element of her behavior in all of us.

I like how Ingrid isn’t even stalking an ex-boyfriend, she just wants to find women to befriend. She has platonic romantic feelings for Taylor, and so badly wants Taylor to love her. There’s a mirroring aspect to it, too. Ingrid is so unaware of her own identity that once she finds someone she’s enamored with, she can only think, Maybe that’s how I’ll find myself. Maybe I am her. Which is just not the answer.

There’s a sexy Catwoman role-playing scene in the film. Would you ever want to play Catwoman for real?Of course. Lately, I’ve been asked that question a lot. I was watching videos of Michelle Pfeiffer—the best—and trying to copy that. I love the idea. But I’m sure it’ll never happen.

You never know. I’ve seen people compare you to a cat even prior to Ingrid. Your mannerisms and acting style are slinky and feline. I do feel cat-like. Maybe in a former life, I was a cat. The only animal I grew up with was a cat named Noel, and she was an outdoor cat. She was not very nice, she kind of kept to herself, and thought she was better than everyone.

You produced both this film and The Little Hours. Why did you begin producing? The Little Hours was written and directed by my long-term boyfriend [Jeff Baena], and I had also been in his other films. I was very involved in that project from the beginning, so it was an organic title that I took on. Ingrid Goes West was a very deliberate choice for me to be a producer. When I read the script initially, I was so excited by it and aggressively coming at Matt Spicer. I thought, If I’m going to be in a movie where my character is in almost every frame, I want to have some sense of control over the end product. I went to film school at NYU, so filmmaking for me has always been a love, not just acting. It felt like it was time. Actors don’t have a lot of control over their careers and what’s being offered to them, and the more control I can get, the better. I’ll hopefully be able to do more interesting work.

You posted something on social media recently that said: “2017 is the SUMMER OF GOING TO SEE MOVIES IN THEATERS.” Most of us watch movies at home on phones or laptops a lot of the time. Why do you think it’s important for people to still get out to the theater?For me, movies are meant to be seen in a theater They’re ideally a group experience. You experience things differently when you’re in a room with other people, there’s a collective consciousness. Even the imagery—when the images are larger than life and bigger than you, the storytelling can be more impactful. I don’t think anything bad about streaming on devices, but there’s an isolation now with movie-watching. You’re supposed to talk about movies, laugh with other people.

It’s been proven that people laugh more in groups. It’s kind of a domino effect. It’s a way to connect with the world. It’s cathartic too, especially in hard times, like now—in our country, at least. It’s a reminder we’re all in this together. We can all connect with these characters. We’re not just in little bubbles. It’s harder to get people to go because it’s so easy to watch stuff at home. And studios aren’t making small movies anymore. It’s sad to me. I always want to try to remind people that it’s a fun thing to do.

What’s your favorite emoji?Probably the knife. It always makes me laugh. Someone will text me, "Hey I’m so sorry, I’m going to be five minutes late," and I’ll text back, like, three knives. There’s something really aggressive in a nonaggressive way about texting someone a picture of a knife.

What’s your least favorite emoji? I hate it when people use the eggplant. There’s something gross about using an eggplant as a sexual emoji. Ew. It’s like a lumpy purple lump.

It’s the most penis-like…It’s just funny to me that that’s the closest phallic thing people can find.

So you’re saying we need a penis emoji.No, we can’t have a penis emoji. I mean, I guess we can. But then we’re going down a dark path. We have to keep it classy. And what’s that penis gonna look like…? Let’s just not go there.

Ingrid Goes West opens Friday, August 11, in NY and L.A., with a national expansion to follow.