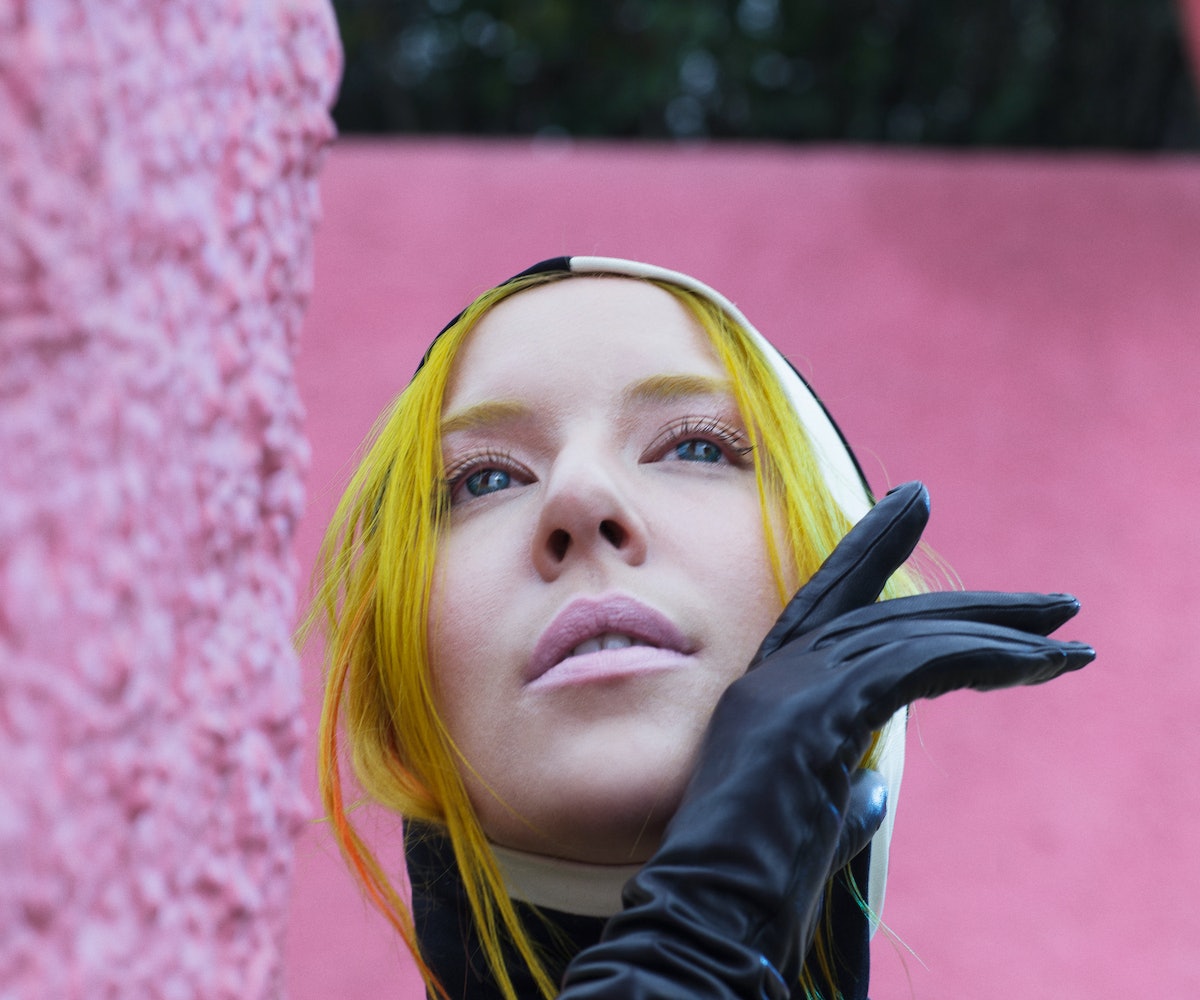 Nearly four years after the release of Olympia, electronic music project Austra is returning on Inauguration Day with their third album, Future Politics. While Katie Stelmanis, the opera-trained vocalist behind the project hails from Toronto, there's no doubt that the timing of the release of the new album—which includes a track titled "Utopia"—has a lot of political relevance in America.

Future Politics departs from the usual full-band effort of Austra, having been entirely written and produced by Stelmanis herself. Each track has a definite inspiration, woven in and around her keyboard beats, sounding almost otherworldly through her tight vibrato. Her messages are far more immediate than simply pondering on the future of the political. There is an urgency to the emotions, and Stelmanis ties them into a nice, tight package with this new record.

Austra sets out on tour on January 20 to promote the album's release. Ease yourself into the future of politics while you stream the mesmerizing new album, and read along as Stelmanis takes us track by track.

I was really inspired by Massive Attack while writing this song. Especially the song “Unfinished Sympathy,” with a vocal melody that, to me, sounds almost improvised. I tend to be very formulaic, with my songwriting, and pattern-oriented. With this track, I wanted to just sing without any concern for that stuff so it would feel more like a free flow. The whole track is only two chords except for the bridge, which is also unusual for me, and I think that makes it feel more like a conversation or a story than a pop song.

I wrote this immediately after I read something called the #AccelerateManifesto, which basically states that technology will have the power to free us from capitalism if it is allowed to develop freely, and is not hindered by finance or copyright. It will eliminate the need for labor and scarcity, creating a post-work communist paradise. It's a response to the return to small-scale acts of resistance and organization and a call to embrace globalization and not be deterred from its complexities.

In the past few years, my hometown of Toronto has become infested with literally hundreds of bland, glass condos. The city is becoming sterile with cultural hubs being destroyed daily because of their geographical potential to become a lucrative development. "Utopia" is about feeling like a stranger in your own city that so few people seem to notice is disappearing, and also about hoping for a shift in the mentality of its residents that could to prevent the complete bland takeover.

This song is about depression, about feeling totally dead inside. It describes what I tend to see as a dangerous place to be, a place of being unable to feel anything at all.

"I Love You More Than You Love Yourself"

A song written about loving someone with depression and how difficult It can be to reach them, to make them feel loved, and how frustrating it is when they cannot find happiness. It's about trying to make a connection, a task that often just feels impossible.

"Angel in Your Eye"

This is my favorite song on the record. I wrote it really quickly, probably within an hour or two. Its really different from most Austra songs, and I spent a lot of time working on the vocals to try to get a really relaxed delivery. I especially love the end of the song—there's a long, slow buildup of tension that breaks with this single, barely there falsetto note that feels really raw and very vulnerable.

I think I was trying to go for a new-age style production here; I don’t really remember what inspired it specifically. I do remember that the outro was really fun to write and record. It’s kind of the only true band moment on the record, with Maya and Dorian having both written for it. It's like of a psychedelic, terrestrial breakdown that washes into a wall of sound.

I suppose Gaia is my love song for the environment. I wrote it while reading about this religion called New Pantheonism, which believes that there is no divine God or any other world other than the one we inhabit, and to disregard the natural world in favor of an imaginary one does great disservice to the miraculous environment we are lucky enough to inhabit.

When I set out to make this album, I had this idea that I wanted to make background music. I feel like most of what I’ve made in the past tends to be quite aggressive, in terms of what it demands from the listener, and I wanted to make something that would simply just color a room rather than demand any other sort of attention. This was the song I wrote that I think succeeded in this goal. I recorded the vocals probably around 100 times trying to get the right whispery effect which is probably very easy for a lot of people but for me really unnatural. Part of the reason I wanted to record the vocals myself was so I could have the flexibility of experimenting with different singing techniques, which would be too stressful in an expensive studio environment.

This track was originally called “Computers Have Feelings Too,” and I kind of regret changing the name. It was written and performed on a midi-keyboard but sounds pretty authentically like a harp, and so I wanted to continue that commentary on whether or not electronic instruments can emote like acoustic ones, and I obviously believe they can. To take it one step further, it can also be a commentary on the role of technology in our lives in general, and how it is becoming an organic part of the human experience and not some external force that we can choose not to interact with.

I wrote a large portion of this album in Mexico City where I was influenced by a lot; two of the most relevant things to this song are the 43 missing students from Iguala and Electrocumbia. I got really into artists like Chancha Via Circuito and Nicola Cruz when I was over there and loved how most of that music sits comfortable at around 90 to 100 BPM. Being really into the vibe, I wrote a ton of songs for this record in that tempo that I eventually had to weed through cuz the whole record would basically have never worked in a live setting. This one survived.

To be living in Mexico and not acknowledge the 43 missing students doesn’t seem right to me. I lived there during what many describe as a civil war: a war between the people and the government, where corruption is so blatant, but no one is ever held accountable. It's a tragic story that can only be remedied by never, ever neglecting to tell it.