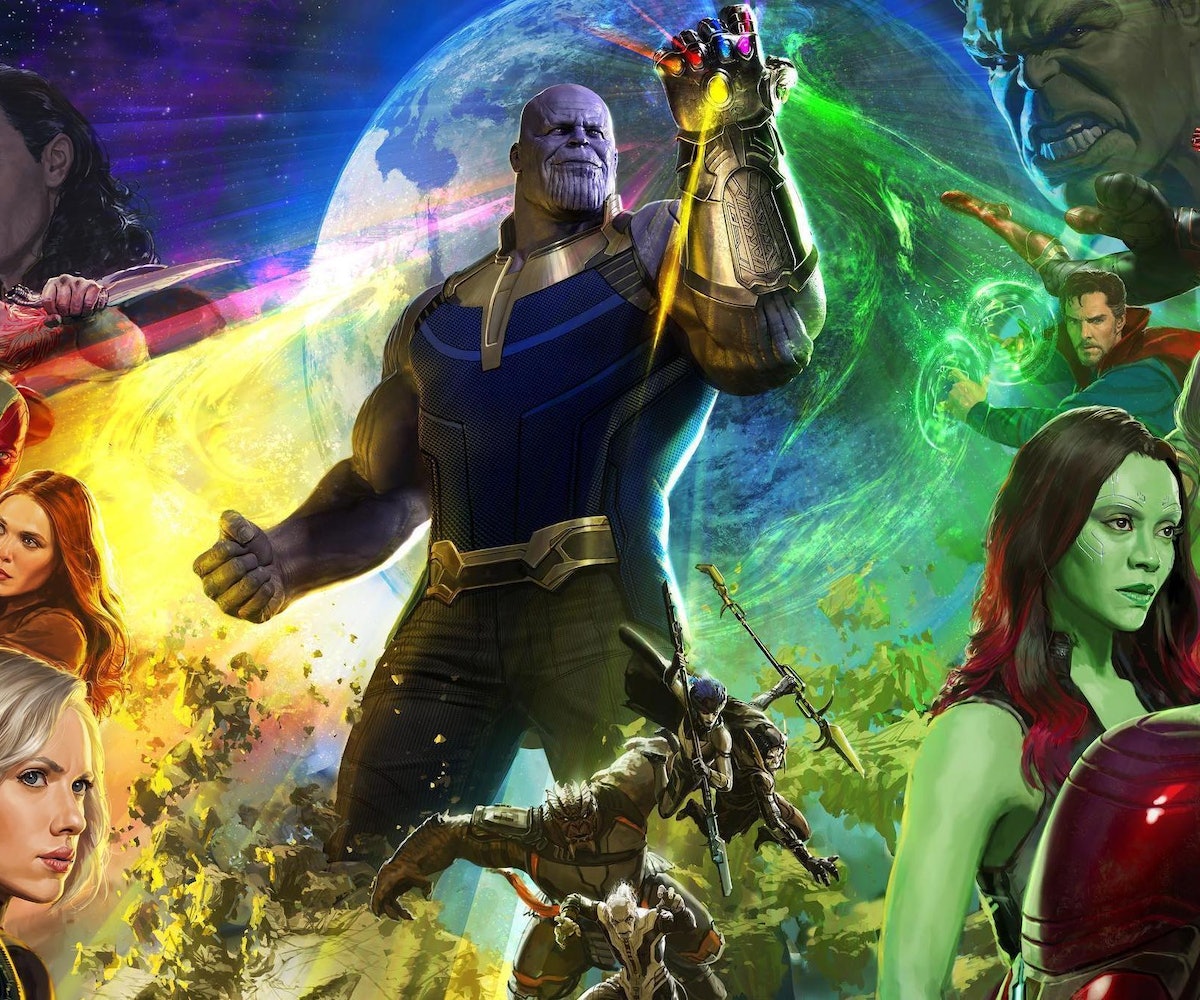 The first trailer for Marvel's Avengers: Infinity War is here, and it's a doozy. With all those superheroes, flashy effects, and d-a-n-g-e-r, there's a lot to take in and a lot to parse through. Don't worry, though—we'll guide you through it.

We kick it off with a monologue detailing why the Avengers were created in the first place. Familiar faces meet (sorta) new ones—hello, Vision in human disguise!—as multiple universes are teased. (Is that the blazing remains of Asgard we see?) Something's up, and that something is a giant portal in New York City, which a decidedly less purple version of the big and evil Thanos uses to traverse universe to universe. He's on a warpath, and no Spider-Man, Captain America, or Hulkbuster suit can stop him. Whatever schism exists between the Avengers best be fixed because Thanos is mad.

Why is Thanos mad? Love. He's hell-bent on getting his hands on the six Infinity Stones to woo his crush, an anthropomorphic version of the concept of death―yes, you read that right.

Elsewhere, between Wakanda, Earth, and what looks like an alien orange planet, Tony Stark and his newly re-implanted arc reactor are observing the destruction. (Shout-out to those eagle-eyed fans for noticing that! We haven't seen that thing since Iron Man 3.) Some major players from the forthcoming Black Panther movie, aside from T'Challa, make an appearance, which gives us a clue as to who survives the big battles when that hits theaters in February.

All in all? This trailer paints an ominous portrait of what's to come. A daunting shot of Thanos flashing his growing Stone collection, worn on the Infinity Gauntlet, shows he's successful in acquiring them. You'll notice that the blue Space Stone, previously held by Loki, is now being worn as jewelry, so maybe he did actually hand it over after all? Also, when did Cap's Bucky thaw out? Last we saw him, he was being operated on by Wakandan scientists attempting to fix the mind-control he was under. Regardless, it's nice to see him and his buddy Captain America both conditioning their hair. (Seriously, how does their hair move so nicely in battle?)

Anyway, there are more Avengers to come. Sadly, Brie Larson's Captain Marvel won't make an appearance this film around, but who knows what the credit sequence may hold. Speaking of, stick around for this trailer's title card following the trailer. You'll be pleasantly surprised by a certain group of saviors waving at a one-eyed Thor. This movie is going to be a trip! It's only fitting for a war of infinity. Overall, this trailer gives us a lot of new information without any context, so we'll just have to wait until May to catch the full feature to see how it all plays out.