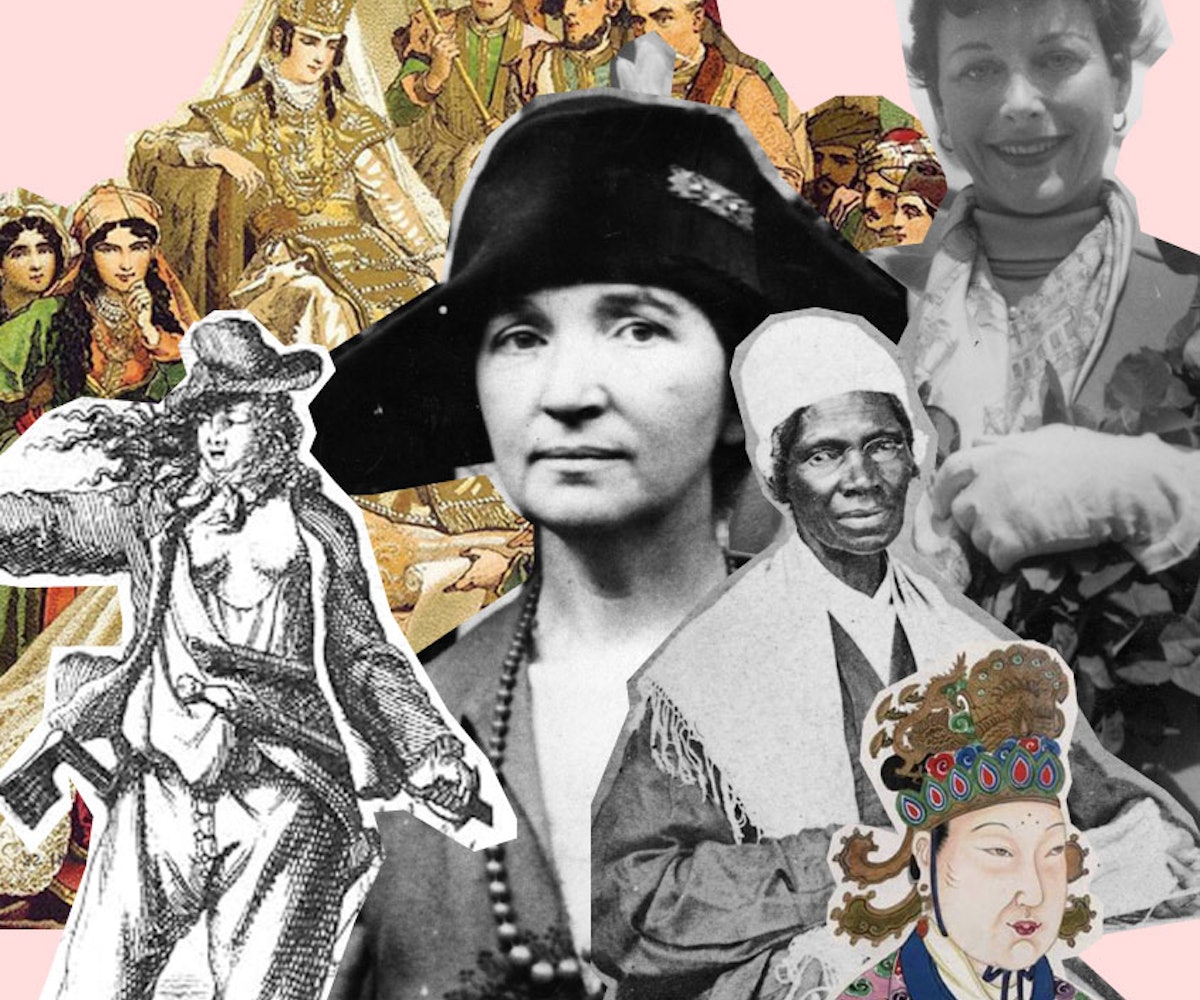 We're grateful to be constantly surrounded by powerful, inspirational women in the media—now more than ever. Feminism took over pop culture in 2014, and this year Reese Witherspoon and Emma Watson have brought the topic to the forefront of Hollywood's consciousness. But powerful women have had a major impact on society from the dawn of time, and as we continue to fight for the rights of all women, there's nothing quite looking towards our feminist role models for some necessary encouragement.

In honor of Women's History Month, we've rounded up some of our favorite female badasses from history to show that girl power is a force to be reckoned with. These 11 inspirations all prove that women run the world—whether they're empresses, warrior princesses, pirates, or pianists.

Born in 625 AD, Wu Zetian reign during the Tang Dynasty (618-906 AD) as the only female emperor in Chinese history, largely because of Confucian beliefs that discouraged placing women in positions of power. Becoming the favorite concubine for Emperor Tai Tsung as a young teenager, Wu used her cunning skills to climb the ranks to eventually marry Emperor Kao Tsung, and then to obtain more power after he died. She began a campaign to elevate the status of women in society by ordering biographies of famous women to be written and giving other women positions of power in the political system. Eventually, her son removed himself from office in 690 AD so Wu could go on to become one of the best loved and most peaceful emperors in history.

Tomoe Gozen, born in 1157, was one of the greatest female Samurai warriors of all time. Though female samurais were not unheard of in Japan at this time, Tomoe's extremely impressive martial arts skills, archery talent, and swordsmanship made her one of the only female warriors whose stories have been recorded in thorough detail in ancient manuscripts. Tomoe fought most notably in the Gempei War and is believed to have singlehandedly killed off a group of enemy soldiers, decapitating their leader after he attempted to pull her off her horse. While Tomoe is thought to have survived the war (unlike her husband), the legends vary: Some say she became a nun for the rest of her life and others believe that she committed seppuku (suicide).

Just because a woman's wearing a crown doesn't mean she's a queen—or even a princess. With the death of her father, Tamar of Georgia was named king. Born in 1169, Tamar was the first female ruler of Georgia, and helped the kingdom to flourish in its golden age of prosperity and peace. That's not to say she was gentle, though: The country achieved much of its stability due to Tamar's massively successful military ventures. What's more, the ruler divorced her first husband and expelled him from the country despite the rigidity of Christianity during the time. On top of all that, she was even canonized by the Eastern Orthodox Church. No big.

Of all the possible titles for a ruler, "warrior princess" may be the most badass. Born in 1260 as the great-great-granddaughter of Genghis Khan, Khutulun was Mongolian royalty best known for her independent spirit and incredible wrestling abilities, which were recorded in history by Marco Polo. As her father taught her the inner workings of the military and encouraged her political ambitions, he also desired that his daughter should have a husband who truly deserved her. So, not particularly wanting to be married off, Khutulun set forth a challenge—she would marry any man who could beat her in a wrestling match, but any man who she beat would have to give her a horse. She wound up with 10,000 horses.

Born in approximately 1700, Anne Bonny was a legendary Irish-American pirate who abandoned her sailor husband to take up a life plundering the Caribbean. Although women were considered bad luck aboard ships, Bonny did not disguise herself as a man—making her own crew fully aware that she was a woman as well as a complete badass and earning her the respect she deserved. Bonny was eventually joined on sea by Mary Read, a fellow female pirate who had gotten into the business while disguised as a man, making these two the original Thelma and Louise.

Born into slavery in 1797, Sojourner Truth went on to become one of the most pivotal women's rights activists and abolitionists in America. She escaped from slavery with her infant daughter in 1826 and won a court case to free her son from slavery shortly after—challenging the white southern slave owner who had purchased him. Advocating for prison reform, anti-slavery laws, and feminist causes until her death, Truth is best known for her extemporaneous "Ain't I a Woman?" speech at the Ohio Women's Convention in 1851.

The last reigning monarch of the islands of Hawaii, Liliʻuokalani dedicated her time on the throne to protecting the native people of her kingdom and fighting against American annexation. She attempted to pass a new constitution that would help to restore power to native Hawaiians and grant more power to the throne, so that she would be better equipped to support her people in the face of increasing U.S. involvement. She believed in peaceful resistance, valuing the lives of native Hawaiians above all else, and she was forced off the throne in 1898. Despite her loss of political power, Liliʻuokalani helped to curate and preserve Hawaiian culture, even composing music (like the classic Hawaiian song "Aloha Oe") and writing poetry herself.

The founder of Planned Parenthood, Margaret Sanger was born in 1879—a time when Comstock Laws made any form of contraception illegal. After working as a nurse seeing many women die from illegal abortions, Sanger began advocating for birth control as a way for women to prevent pregnancies that were unwanted and potentially health-endangering. Though she was arrested in 1916 for opening America's first birth control clinic, Sanger continued fighting for women's right to birth control, establishing the American Birth Control League in 1921 and advocating for women's rights to their own reproductive health for the rest of her life.

Born in Atlanta in 1910, Mary Lou Williams was one of the most influential jazz musicians of the 20th century, as she composed alongside greats like Benny Goodman and Duke Ellington. She made major waves in the development of swing, bebop, and blues styles, and is often regarded as the first woman to be remembered and regarded for her achievements in the history of jazz music. As the first woman to start her own record label, Williams paved the way for women to succeed in all music styles.

If you can't imagine living without your smartphone, there's an Austrian movie star your should seriously thank. Born in 1914, Hedy Lamarr not only made a major impact on the silver screen with her notorious come-hither stare, but also developed radio technology that helped the allies to win World War II.  With co-inventor George Anthiel, Lamarr invented a wireless communications system that helped America to electronically send military matters under top security. This major tech development helped lead to the creation of all wireless communication devices we use today—cell phones, fax machines, and more.

A key player in the Stonewall riots for LGBTQ rights in 1969, Marsha P. Johnson was born in 1944 in Elizabeth, New Jersey. As a trans woman, Johnson dedicated her life to fighting for rights and safety for all members of the LGBTQ community. With fellow activist Sylvia Rivera, Johnson established S.T.A.R. (Street Transvestite Action Revolutionaries) in 1970—the first organization aimed at providing shelter and refuge for homeless trans women and youths in New York City. On top of her activism, Johnson also spent much of her time on the stage as a charismatic entertainer and in the studio as a model for Andy Warhol. She was tragically found dead in the Hudson River in 1992, and the NYPD reopened the unsolved case of her murder in 2012. Despite her premature passing, Johnson still stands as one of the most inspiring trans activists in history.