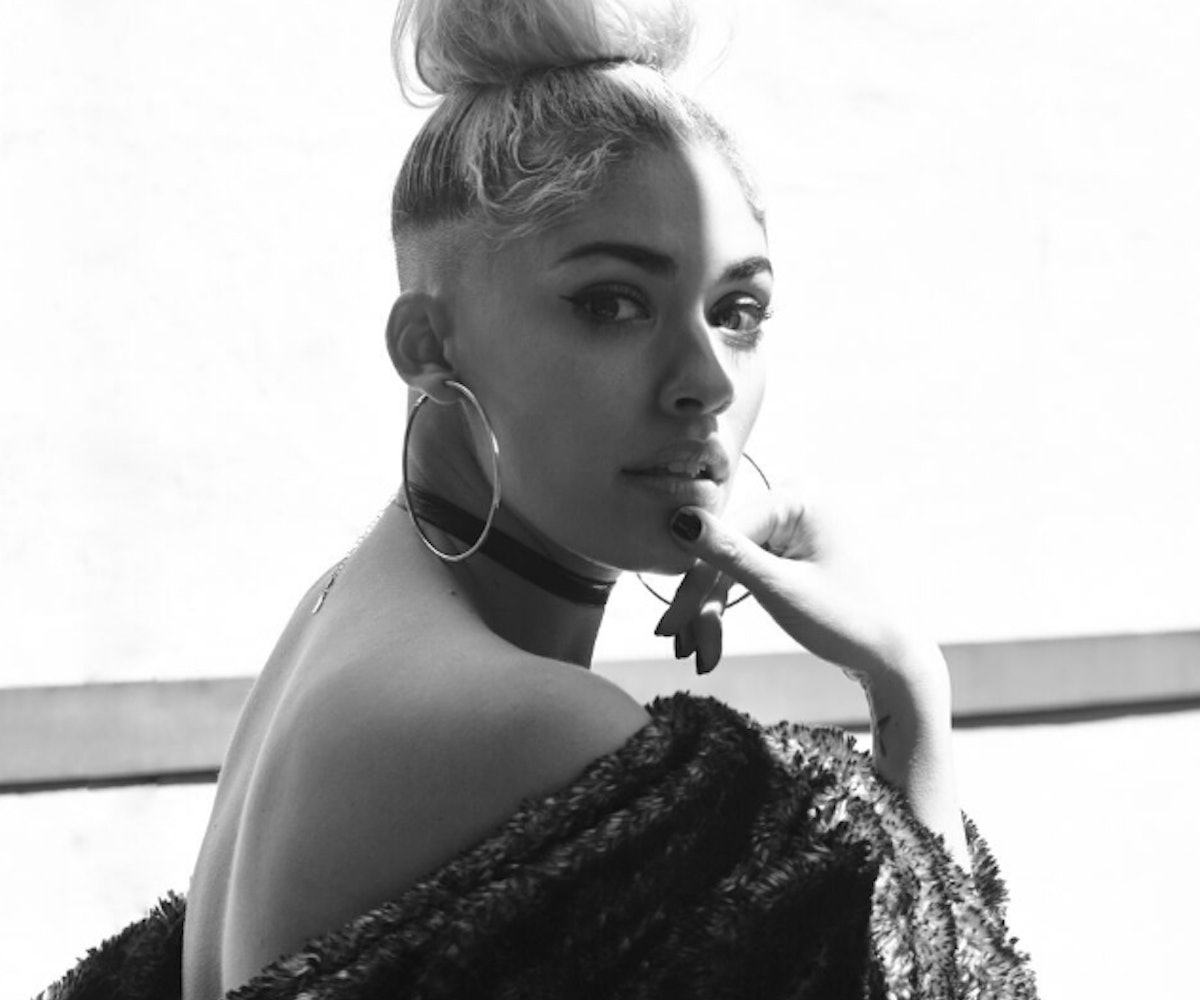 Last Friday, Stella, daughter of rock legend Carlos Santana, self-released her album Selfish, a project with a dreamy sound and an overall message to love and care for yourself before anyone else. On it, Stella takes a wise look at the detrimental effects destructive relationships have on us, as well as the driving desire to see them through. Songs like “Switch” show her vulnerability with lyrics like, “I know you’re not the guy I want you to be/ But I’m scared there’s no one else for me.” Throughout, listeners are given an unfiltered look at the singer’s breakups, as if we were reading the pages of her diary. Her music will sync with your own memories of the suffocating moments before romantic splits, being unsure if you want to call it quits, and ultimately choosing to be independent and move forward.

With Missy Elliot, Aaliyah, Lauryn Hill, Brandy, Mya, and 112 shaping her taste in music, Stella’s sound is nothing like that of her father’s. Case in point: Daniel Lynas, who mixed the album, also worked on A$AP Rocky’s first mixtape, Live. Love. ASAP, which lends credence to Stella’s hip hop flare. Selfish blends rich, mid-range vocals and easy, soulful R&B with sensual synths and spacious percussion, creating therapeutic and airy tracks that are perfect for a night alone or before an intimate outing. But be prepared—this is a breakup album, after all.

Here, we catch up with Stella who tells us how she deals with second-guessing herself during breakups, her style preferences, Snapchat addiction, and the beauty of putting herself first.

Self-releasing an album seems like it takes a lot of work. How did you manage it all?

A lot of work, yes, but it's been so fun! And I've grown from it every minute. You have to be able to see every part of what you're doing and also project what it will be like six months from now, and you also have to able to see it from all angles! I don't think that's possible for anyone [to do alone], and I don't even want to be able to do that. So I need help bringing a music video to life. Building a team, getting people behind you who have vision, who believe in you, who see you for who you are and not for who they want you to be—if you can master manifesting people like that around you, you can do anything. But you can't con it. You can't fake it. I mean, you can, but it won't last, and I'm interested in longevity. It's about a lot more than just making music.

What’s the meaning behind the album's title, Selfish?

It's called “Selfish” because I believe in taking care of yourself first. How can you possibly be any good to anyone else if you're not at your best? It's not about doing things at others' expense or ignoring the fact that we are all connected. It’s about self-love, self-care, self-exploration, and the understanding that shining brightly does not dim anyone else's light. It inspires and reminds others of the light within them. And if there are people around you who don't understand that, drop them. There are people out there who want to lift you up, but you can only find them by believing they exist and not accepting anything less.

For the album art, you’re tied up by microphone cords and holding a trophy. What’s the significance of this imagery?

When I started this album, I decided to say no to a lot of things and people that weren't directly connected to making music. Specifically, I closed myself off from dating and being around anyone in general who wasn't focused and passionate about what they were doing in life. It wasn't an easy process; it became quite lonely. The trophy symbolizes my focus—“eyes on the prize,” so to speak—and being wrapped in the microphone with my back to the camera symbolized how even though I closed myself off to a lot, it was my choice. It was an empowered one. And being shot in that empty space signified a clean, pure slate—the opportunity to really get into some self-discovery and create whatever I wanted based on what I was discovering.

What are some of the places or things that inspire your music?

My lyrics are inspired by my own experiences. I write every song, and I'm mostly inspired and compelled to write when I'm going through something emotionally difficult.

What inspired your music video for “Switch”? The white wig and angel wings are so intriguing.

I wrote “Switch” as a poem on a day where I decided not to go back to a relationship anymore. There was a lot of back and forth for a while and someone just needed to end it, quite frankly, so I did. But doing so was incredibly painful because I wanted the relationship to be different and was still holding on to that possibility. It was important that I reminded myself that I wasn't giving up, but that I had actually just exhausted all resources and the only option left was to walk away. Everything else had been done already. So in the video, the wig and the wings symbolized clinging to that dream or possibility, then I decide not to live that way anymore and I switch myself back to reality.

“You First” talks about self-love. How did you learn to to love yourself?

I think I indirectly learned how to love myself after putting others before myself over and over again. I reached a place where I was like, “Ok, this feels like shit. I'm drained, I'm resentful, I'm heartbroken, and it's not anyone else's fault but my own because I'm not listening to myself.” In fact, I was purposely ignoring my own feelings and observations about what was going on around me. If I felt like I was being lied to or misled or when someone would make a promise and then not fulfill it, a part of me would be like, “F%#$ this, I'm out!” But another part of me felt like I should give more chances and not be so quick to drop people. And after a while I started listening to the part of me that felt more powerful—which wasn't the part that was like, “Hmm, maybe one more chance for you.” That part of me felt weak, sheepish, and too scared to take a stand. I consider myself a compassionate and empathetic person, but if a relationship isn't mutually beneficial, then I have to change my position.

Who are some artists that you are inspired by?

Lauryn Hill has always been a huge inspiration of mine. She's raw, unapologetic, demanding, and not into flashing lights and pyrotechnics or a lot of production. Not that there is anything wrong with those things, it's just not my style. I am inspired by the way she expresses herself. It feels honest, like she leaves a piece of her soul in everything she does. It's not just about the bottom line. And Amy Winehouse, Lykke Li, Frank Ocean—I'm drawn to rawness.

How would you describe your personal style? Who are some of your style icons?

Well, my entire closet is basically black. I blame New York. I've always been a tomboy, or at least that's what people called it while I was growing up—as if it's "unique" for a girl to be comfortable expressing both masculine and feminine parts of herself, and as if there are qualities that are only masculine or only feminine. But that's a whole other discussion!

What are some of your everyday essentials?

Water! I feel like I'm constantly trying to stay hydrated. My phone and I are in a serious committed relationship; my music is there, I can communicate through email or text to anyone, social media, etc. Because I'm not being managed at the moment, I have to stay on top of it all. So my phone is my best friend, haha. I love working out and feeling strong. Obviously music: listening to it, writing it, building it. My all-black high-top Converse. Snapchat! I really shine on Snapchat. And I’m always, always, always reminding myself to be grateful—to appreciate what I have instead of focusing on what I don't have yet. It's difficult to balance between being grateful for what you have while also wanting more, but I think it's possible and it feels good once you've figured out how to do it.

What can we expect next from you?

I'm about to work on an EP with the guys from Twice as Nice out in L.A. in a few weeks. I also have a song I wrote and already shot a video for that I might just be too impatient to wait to release. Performance-wise I'll be at Amoeba Music in Hollywood on August 16. I’m very excited about that! I'm just getting started so you can expect a lot from me moving forward. This is just the beginning.