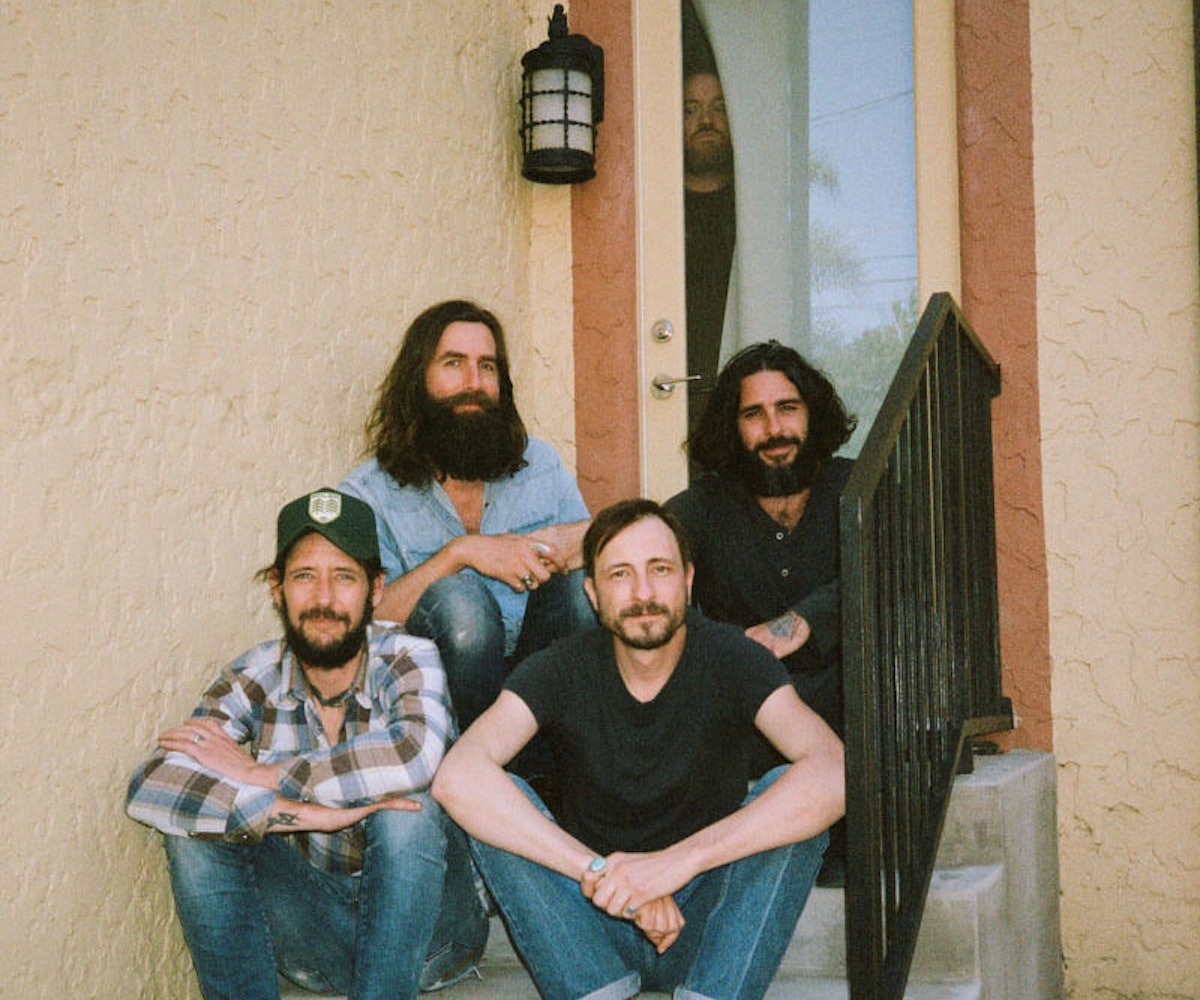 The last place you would expect to find Southern rock ’n’ roll brotherhood Band of Horses is in the backyard of an Airbnb near the nail salons of Beverly Hills. Yet, there they are, their look screaming Friday evening at a saloon in One-Horse Town, USA. Frontman Ben Bridwell straddles a bench, dressed in double denim, a plaid shirt, and a trucker hat. A bottle of beer dangles by his scrawny hip in a holster branded with his first name. Drummer Creighton Barrett sits next to him, beer in heavily tattooed hand. Bridwell points to his holster, which reads “Sexy Beast.” “There’s no question who that beer belongs to,” he says with a smile.

It’s a quick and productive trip for the group, which also includes lead guitarist Tyler Ramsey, multi-instrumentalist Ryan Monroe, and bassist Bill Reynolds. Today, they performed at a local radio station; yesterday, they shot the video for “Casual Party,” the first single from their fifth album, Why Are You OK, which was released in June.

“It’s a monster party,” says Bridwell of the visuals. “Think of yourself having a bad acid trip at the cantina in Star Wars.” The inspiration for the record is far less trippy, rather, it’s reflective of Bridwell’s time back home in South Carolina with his wife and four daughters. Why Are You OK is brimming with the pent-up frustration of all-out stadium rock on “Casual Party,” but also contains the quieter alt-country lullaby “Whatever, Wherever,” which means that there’s plenty here for Biffy Clyro fans and Rilo Kiley die-hards alike.

Like many seasoned bands, Band of Horses are juxtaposed between the Peter Pan syndrome of tour life and the creeping sense of domestic responsibility that comes with being fathers and husbands. “Real life slaps you upside the head and you gotta hang out with some conservatives and watch your language,” jokes Bridwell about life at home. “Eventually, I took to [singing] about my boring, suburban, dadhood life.”

Things weren’t always so low-key for the band, though. They formed in Seattle back in 2004 under head honcho Bridwell, establishing themselves as a DIY, self-funded operation. By 2010, they had signed to a major label, released their third, Grammy-nominated album, Infinite Arms, and performed from California to Denmark—and had seen multiple lineups of members. “There’s no hard and fast rules about anything now,” says Bridwell of the band’s journey. “We’ve been through it enough to know that we all love each other and we got each other’s back more than anybody does.”

They draw their fair share of support from the outside, too. Jason Lytle, of Grandaddy fame, broke his personal rule against producing for others to record the album with the guys in Stinson Beach, California, and Dinosaur Jr.’s J Mascis appears on the track “In a Drawer.” If that wasn’t enough hero-billing, music legend Rick Rubin—the co-founder of Def Jam Records who has produced for everyone from Johnny Cash to Kanye West—serves as the album’s executive producer. “Rick kind of cold-called me,” recalls Bridwell. Reynolds interjects: “Rick and I both do meditation and we were texting about different practices, then he asked me what was going on with our band. He’s an awesome guy.” Barrett adds, “He does, however, speak in enigmatic shapes and terms. He kept talking about one of the tracks needing more ‘invisible low-end power.’ He’s very much The Dude from The Big Lebowski.”

Why Are You OK may involve a number of industry vets, but Bridwell is insistent upon its universal appeal: “It’s youthful! Anyone that calls us ‘dad rock’ can kiss my balls,” he says. The band bangs on the table in agreement, clinking their bottles with a resounding “Amen!”