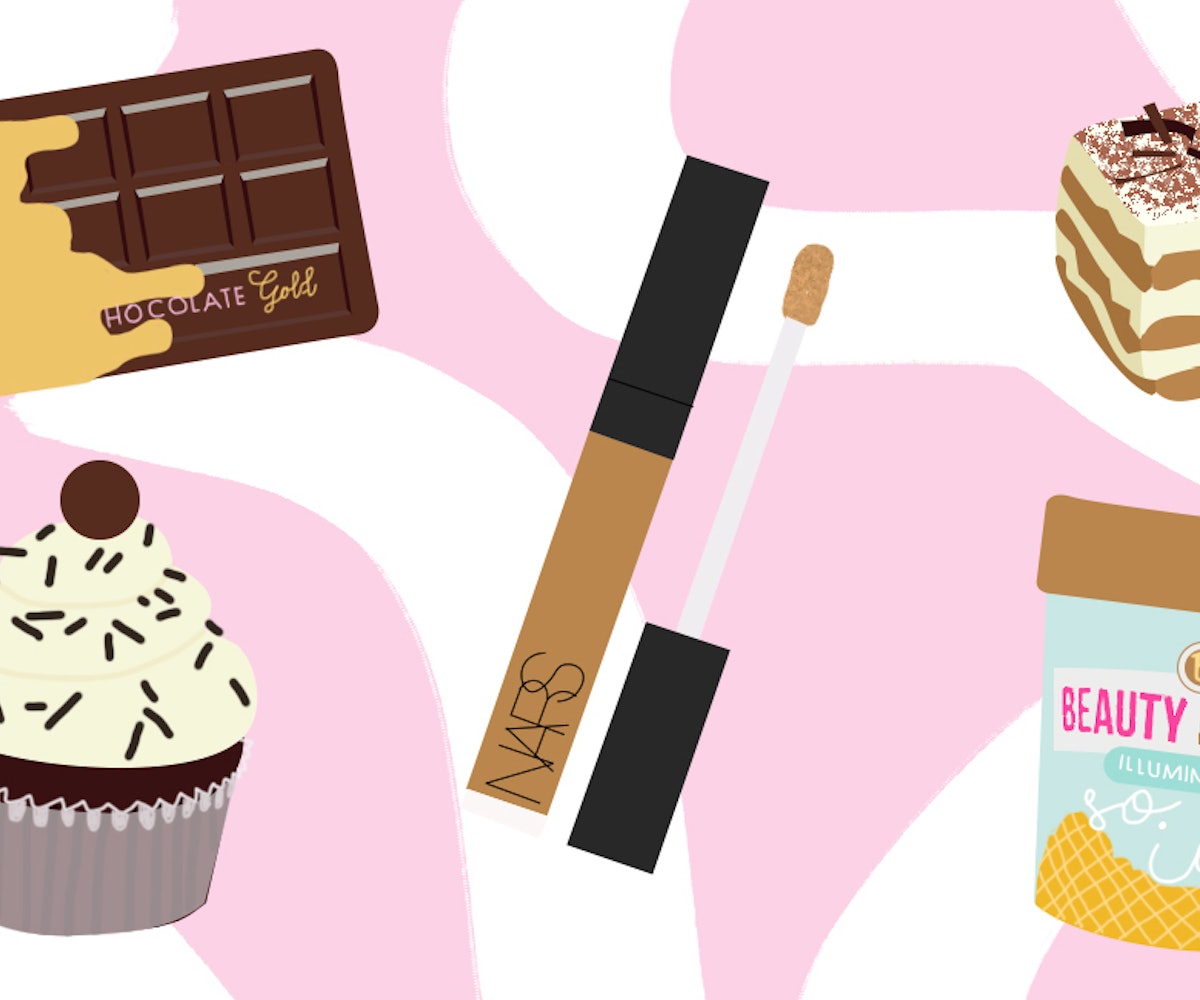 My makeup bag reads like a dessert menu. There’s a concealer called Tiramisu. A deep red lip gloss named Chocolat et Pommes. I contour with Mocha and Espresso. I highlight with “Sinnamon” and Rum.

It’s not hard to see the pattern. Beauty brands aren’t just using any kind of food to sell cosmetics to women—they’re using sugary ones. Names, smells, colors, and packaging are frequently used to evoke sensory familiarity to recall life’s sweeter moments, but the rush to use food for targeted advertising is often based on unfounded stereotypes. Women have been portrayed as the ultimate cravers of desserts and candy, and there’s an endless list of food and drinks gendered as woman-centric—rosé, macarons, cupcakes, ice cream for bad days and breakups, chocolates for anniversaries and apologies, to start—because they’re perceived as sweet, dainty, and, oftentimes, they're even pink. When beauty brands take advantage of that, they aren’t just selling makeup anymore. They’re selling the smell of cookies fresh from the oven, the indulgence of a piece of chocolate, the perfect frosted cupcake, and a skewed perception of femininity in each sweet bite.

Food is inherently gender-neutral, so what is it that turns meat and beer into a man’s food, and salads and Cosmopolitans into a woman’s? Advertisers have been targeting women as consumers of chocolate and candy since the early-19th century, and would often show women in their ads, Morgan said. Confectionary companies in the 1930s sold the seductive idea of a decadent upper-class lifestyle to women through just one small piece of chocolate. “There’s something about daintiness that gets equated to wealth,” said Morgan. “It gets translated to luxury.”

Though women are associated with sweets, they’re also made to fear overindulgence. Turning the simple act of enjoying a piece of candy into a guilty pleasure did not escape beauty brands. Case in point, Models Own came out with a “Cheat Day” eyeshadow palette with “creamy mattes, sugary shimmers, and glazed glitters”that were designed to look like a box of doughnuts. “I was like, really, we’re still doing this?” said Hillary Belzer, founder of the Makeup Museum, a blog that researches the history of cosmetics.

Beauty’s dependence on sweets made headlines this past summer when Twitter user @sabinaexy pointed out that darker shades of foundation are almost always named after food and flavors. The foundation line she was referring to included names like caramel, maple, hazelnut, cocoa, truffle, and ganache.

“That marketing strategy is getting old. There are many names they can use to describe darker shades besides food,” said beauty blogger Raye Boyce.

Part of the reason brands fall back on these tried-and-tested names is that black women have been both fetishized and denigrated for their skin tone for generations, said Ijeoma Oluo, a writer and speaker on race and feminism. “I have been told that I have milk chocolate skin by [catcallers],” she said. “No one likes being thought of as a food.”

A Mintel study found that black and Hispanic women are driving growth in the beauty industry forward, and brands like Rihanna’s Fenty Beauty are striving for inclusivity. As consumers push for brands to capture the nuances of darker tones through foundation, it’s likely we’ll see those food names fade away.

“Chocolate actually isn’t a good descriptor of skin tone,” Oluo said. “If the beauty industry actually dedicates itself to diversity, we’re going to run out of food names very quickly,”

Still, from a brand’s perspective, there’s something fun and gimmicky about using food to market beauty that just works. Beauty PR agent Jessica McCafferty has found that products with a physical resemblance to food have a distinct advantage over other traditional packaging. You’re seeing more dessert-themed makeup marketed toward teens and younger girls, and there’s also the basic fact that they smell good, though some consumers balk at scented products because of artificial additives. “It sells,” Belzer said. “It’s a very easy mark in product design and marketing.”

There’s nothing inherently wrong with chocolates and cupcakes, and perhaps beauty brands are simply using a delicious treat to get more women to buy makeup. But the relationship women have with sugar has its own set of rules. Be sweet, but not too sweet. Take a bite, but not another. Eat to be seductive, but not to satiate. The beauty industry’s explicit use of women-centric food doesn’t get us anywhere. “It’s less about the name itself and the power we attach to the name,” Oluo said. It’s a small cog toward the treatment of women—and “their” foods—as equals. So maybe one day, when we look at a cupcake, we won’t see something cute or feminine or girly. We’ll just see a cupcake.