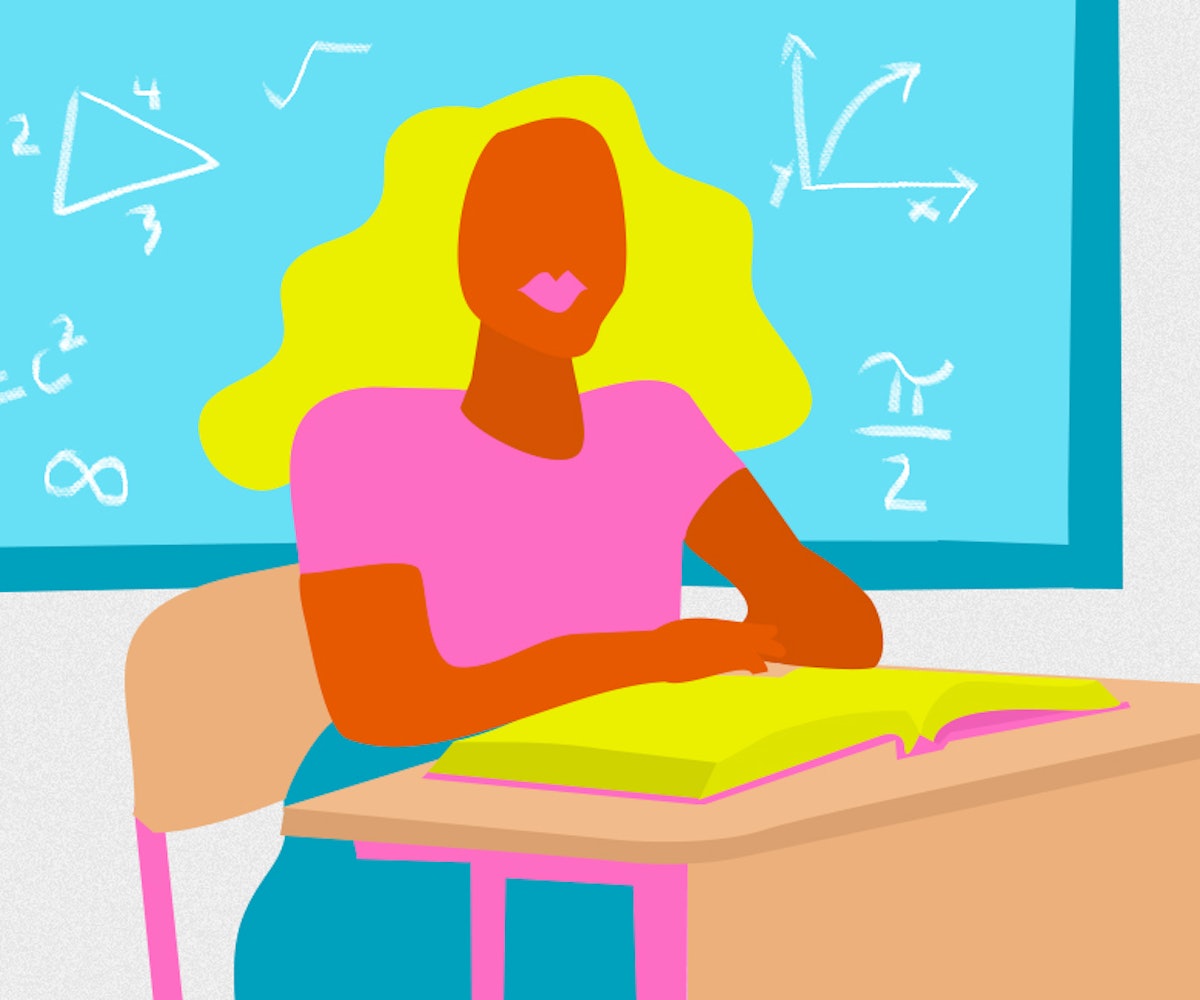 In Places and Faces, writers explore the ways in which the aesthetic peculiarities of the places where they grew up defined their sense of beauty as they move throughout the world. Below, Arabelle Sicardi explains how they explored their love for beauty while attending an academically rigorous high school.

I went to the same school as a superhero. No, seriously: My high school exists in the Marvel Universe, as the school Muslim superhero Ms. Marvel attends. It is unusual in other ways, too: Unlike most high schools, the school’s diversity was written into its admissions process. Each class aims to have a roughly equal division of ethnicities: 25 percent white, 25 percent black, 25 percent Asian, 25 percent Latinx. The reality isn’t much different—minorities actually make up the majority of the student body. Its makeup is eerily similar to the actual makeup of the United States: There are fewer white men in America than all other demographics. There are much fewer wealthy people in America than not, and wealth did not buy anyone’s way into our school. The gender divide is pretty even, too. My school is a more accurate representation of the diversity of America than the U.S Senate, when you compare their demographic makeups side by side. And: My high school was, and still is, one of the highest performing schools in America. (Congress’ approval rating, in comparison, is abysmal.)

In movies and television, high schools are segregated places, divided up into populations of jocks and art nerds, winners and losers, but at my high school, we were all just competitive nerds. The most valuable thing we had in school wasn’t our beauty, but our brains, and people asked your PSAT score before they asked for your name. And they almost never asked what lipstick you were wearing. It wasn’t that our appearances were insignificant, it was that we were taught our beauty wouldn’t be what mattered: It wouldn’t save us; it would not deliver certain success. Instead, our futures depend on how hard we studied, and the intellectual struggles we overcome.

Going to school in such an academically competitive environment, surrounded by people vastly different from me, made me understand that my appearance—my whiteness—gave me a cultural inheritance no more profound than anyone else’s. And yet, outside those halls, my whiteness offered me privileges not afforded to people often smarter than me, more charming than me, better cooks than me, better musicians than me, better scientists than me, better dramatists than me. But those privileges were mine simply because of my genetics—simply because of my appearance. Though in my school, my whiteness qualified me as a statistic that afforded me entry, it did not guarantee my success. But outside of school, I learned whiteness was a cheat code in a system of rewards, access, and power. And yet it was clearly not the best or even a good position in which to enter or exist in this world. Learning this in high school helped me realize I would have to be able to offer more than my appearance as testimony to my character if I was going to survive this world.

Growing up in an environment of competitive excellence—not just my high school, but also in the richly diverse New York City, northern New Jersey area—made me figure out what parts of myself were worth protecting and promoting and shaping into something worth fighting for. It crystallized my belief that difference is valuable. Still, it was easy to become paralyzed with fear and self-doubt. I wanted to go to art school for college when everyone else wanted to get into an Ivy League and major in a science field. It was hard to convey the belief that even if appearance wasn’t everything, aesthetics and body politics did matter so much to the way we live our lives. Beauty was worth paying attention to, even if it was hard to equivocate and compare its impact in a data-driven way. I worried about taking the wrong path constantly, if betting on myself was wrong. What if I put everything I am into this thing, and no one cares at all? What if I’m forgotten about?

My fear of being foolish made me curious about how far beauty reached, and that curiosity led me everywhere. Studying for AP Statistics while daydreaming about beauty led me to the Golden Ratio and all of the mathematical formulations of beauty and how it is sometimes calculated. Finding the connection between science and mathematics and celebrity-beauty culture made me think about the ways beauty was always part of the racism around the world. Learning about writers like Toni Morrison in English class made me think more about race, beauty, womanhood: that being different in a canon didn’t make you a weird error in the system, it made you unforgettable. My interests weren’t contradictory to these other paths. I was simply finding ways to connect them to more realms. Finding a way to convey that was the hard part.

This was right around the time the Iranian Revolution bloomed on Twitter (also called the Twitter Revolution), and Occupy Wall Street began a few miles away from my school. These were some of the first movements energized by current social media and the diversity of voices you can find online. They were also started by ordinary people who happened to be curious, and scared, and fed-up with the status quo, people who had no idea about the potential of their stories but offered them anyway, and changed the world because of it. One person showed up in one place, hoping to reach just one person, and the whole world shifted focus. Seeing that happen made me realize we have too much to lose not to tell our stories when we can. What we have to gain is everything we could ever want. The future is always up for grabs, and belief is bold. You have to believe in something so beautiful you’re willing to embarrass yourself to get it.

I find the importance of preserving beauty in my community to be an act of protest. One of my favorite writers, Lidia Yuknavitch, puts it like so: “Be careful what stories you tell yourselves about beauty, about otherness. Be careful about what stories ‘count.’ They will have consequences that shake the planet.”

When the world gets uglier, I see beauty as an act of rebellion. To be yourself in a world that would have you try to be otherwise: to be undocumented, to be brown, to be black, to be disabled, to be queer, in a country that doesn’t know how to love you, that is an act of defiance in the face of great ugliness, and it is a political move.

There’s a reason that activists, time and time again, have placed flowers in the barrels of police officer’s guns and it is the same reason we line monuments and shrines and gravestones with bouquets. The right to live a life of freedom, one filled with art, and music, and beauty, as much as anything else, every single person deserves this, regardless of our individual identities. We should all be able to live the lives we want, to exist on our own terms. As activist Rose Schneiderman once said at a protest: “The worker must have bread, but she must have roses too.”

During my last year in high school, I was brought on stage in our auditorium as an example of poor conduct, because I exploited the dress code to dress fashionably more than professionally. I was exuberant and wore patterns and tulle and the speaker aimed to prove that my difference would make me less likely to be successful in the world. She didn’t seem to consider that I didn’t want the path she had assumed I had to travel. I told her as much and walked off the stage. And you know what?

All those competitive nerds applauded and backed me up. By then, so close to graduation, we had all realized: The only world worth living in is the one where everyone is free to be themselves. And wouldn’t that be a beautiful thing?