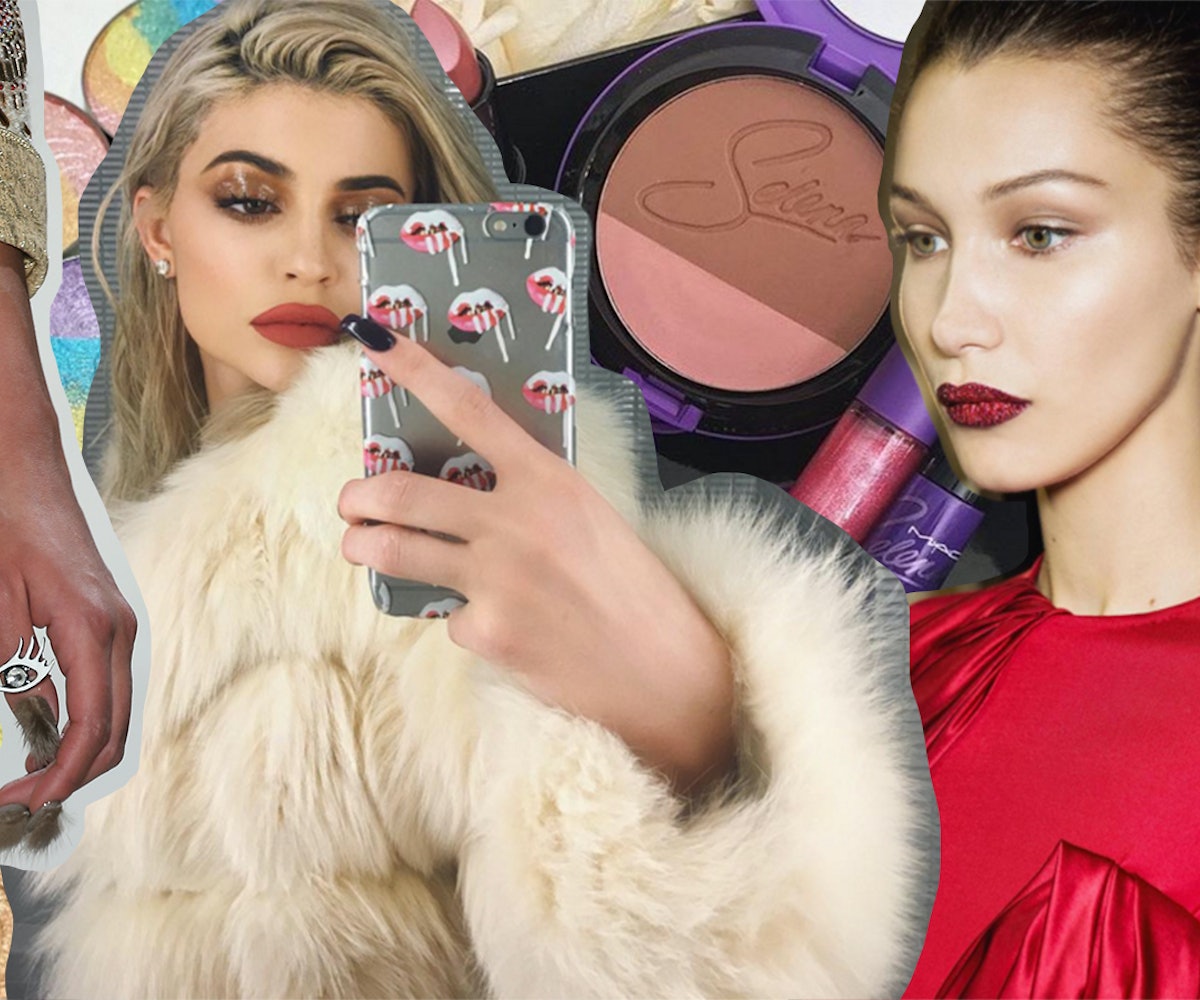 This year was a pretty major one for beauty. It was full of celebrating the independent and the quirky. Many of the year’s most memorable moments were even introduced through real people—from small, handmade beauty brands sold on Etsy to Instagram beauty junkies launching their techniques into viral status across the social media boards. And the trends that really stuck? They were pretty atypical as to what we usually expect. Red lips and beachy waves were ditched for rainbow cheekbones, pierced updos, and the gothiest of goth looks.

On the other hand, social media also allowed celebrities to have an even stronger hold on the industry—whether they were behind festival season’s It Hair Color or busy building a beauty empire of their own.

It was also a year of empowerment; powerful female figures chose to go public sans makeup to make a statement, while others set to tear down the racial and gender divides that still inhabit the beauty industry.

Overall, the takeaway from 2016 is that one’s individuality is to be celebrated. Click through the gallery below to check out what 2016 beauty moments we'll remember for years to come.

When James Charles was named a Cover Girl brand ambassador

Back in October, Cover Girl made a very exciting announcement: their newest brand ambassador would be 17-year-old makeup vlogger and Instagram star James Charles—making him the first Cover Boy in history.

When Pat McGrath gave us the glitter lip

Gold 001 and Phantom 002, the first two cosmetic launches from the legendary makeup artist, may have rocked our worlds in 2015, but everything McGrath has released in 2016 was beyond epic. Though we learned to properly strobe with Skin Fetish 003 and made our inner corners dazzle with Metalmorphosis 005, we can’t deny the glittered magic that was Lust 004 changed it all (especially our holiday party looks). From the moment we saw Bella Hadid’s sparkling lips backstage at Versace’s Couture show back in July, we knew there something iconic on the way.

When that rainbow highlighter broke the internet

No one will ever forget the time the unassuming Etsy store Bitter Lace Beauty launched a stunning rainbow highlighter than went viral and beyond, even listing on eBay for a whopping $1,225 after it sold out.

When Kylie Jenner basically took over the (beauty) world

Kylie Jenner may have launched her very first Kylie Cosmetic Lip Kit on Cyber Monday 2015, but there’s no denying that it was 2016 that became the year of the, well, Lip Kit. Every single Kylie Cosmetic’s launch (on top of literally everything Jenner does) has caused the world to go into a frenzy—and everything to sell out almost instantly. It even won Miss Jenner’s line the 2016 title of Indie Beauty Brand of the Year by WWD.

Back in April, Shea Moisture launched a powerful campaign that shined a light on the racial divides that have long plagued the drugstore beauty aisle. It points out that the “beauty” and “ethnic” sections of stores have long been separated, and the brand is working to break down those walls, pushing for all beauty products to be sold in the beauty aisle, together.

When Marc Jacobs turned all of our favorite girls goth

Despite the controversy behind the hair styling in his spring 2017 show, Marc Jacobs’ fall 2016 collection was not only epic, but the makeup was insane. Our favorite models of the moment, from Kendall Jenner to Gigi Hadid, were joined on the runway by none other than Lady Gaga and were all turned into the creepiest goth girls we’ve ever seen, with the blackest of lips and ghastly shadowed eyes. We loved it so much, we had to recreate it.

When (faux) freckles were the trendiest thing, ever

Sometime during early 2016, faux freckles became the Instagram beauty trend of the moment. If they weren’t endowed with au natural speckles, beauty fanatics did everything from temporarily tattooing to drawing them on with rainbow eyeliner and glitter.

During Libertine’s fall 2016 runway show, the brand debuted more than some new, wild prints. Models marched down the catwalk with werewolf-like nails, courtesy of nail geniuses CND. Even though this half-wolf, half-human look never really caught on in the mainstream, it certainly was an important moment for nail art enthusiasts.

When M.A.C launched the Selena collection

Fans all over the world rejoiced when the late Selena Quintanilla was honored with her very own M.A.C. collection (which, naturally, included a deep red lipstick and a black liquid liner).

When Cassie debuted highlighter yellow hair at the VMAs

There was definitely no way to miss Cassie as she arrived at August’s VMAs. The artist rolled up to the red carpet in the brightest neon yellow hair we’ve ever seen.

2016 marks the year that Alicia Keys decided to stop wearing makeup, proving to women all over the world that we don’t need to pile on cosmetics in order to be beautiful. Of course, she still looks absolutely flawless, even sans eyeliner.

When rose gold hair became all the rage

This past spring, we couldn’t avoid seeing rose gold hair in any of our feeds, even if we tried. This gorgeous reddish-pinkish blonde was launched into trend territory once Emma Roberts was spotted with a new 'do, with other celebrities and beauty fans everywhere following suit.

When Taylor Swift rocked the vampiest lip to the Met Gala

At this year’s Met Gala, Taylor Swift paired her then-new white blonde hair with the vampiest of plum lips, emphasizing the warrior goddess of the future moment she was having in that metallic Louis Vuitton dress.

When Rihanna got dreadlocks

The internet freaked out when Rihanna went from sleek, straight hair to butt-grazing dreadlocks immediately after the Marc Jacobs dreadlock controversy. This is just further proof that Rihanna can rock any style and slay it completely.

When Zendaya had a mullet, and it was perfection

Mullets aren’t the most flattering of hairstyles, to say the least, but somehow Zendaya managed to effortlessly pull this one off at the Grammys.

When the internet had a meltdown over these jelly lipsticks

Back in June, these clear jelly lipsticks had the internet freaking out. While they may have been colorless, they contained everything from actual gold flecks to real flowers, making them quite the lipstick junkie collector’s item (and even inspired a number of fakes and frauds to be sold).

When we met the Dyson Hair Dryer

Beauty fanatics equally freaked out when Dyson, the lavish vacuum brand, came out with its very first handheld hairdryer. While they don’t come cheap—prices start at $400—it has advanced qualities that make it worth the price. It’s super quiet, weighs half of what an average hairdryer does, runs up to eight times as fast, and uses self-correcting heat intelligent technology, so you don’t fry your hair.

When celebrities started piercing their hair

We first saw this look debut on the red carpet when hair stylist Chris Appleton gave Shay Mitchell the ultimate updo—with a row of hoops “piercing” the back of her head. Chloe and Halle also rocked this look to the VMAs, and soon enough, it trickled down to our favorite trendsetting street style stars.