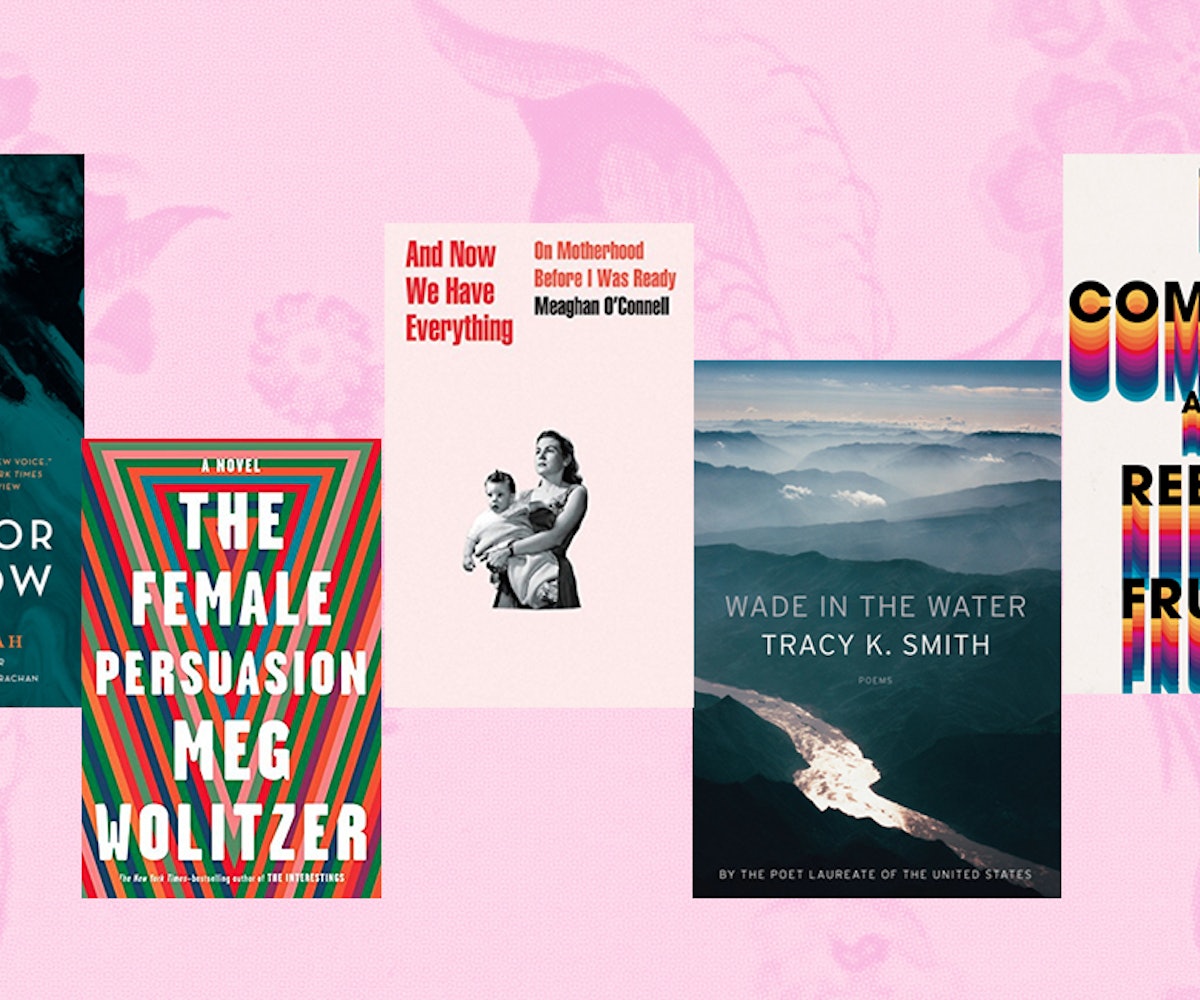 From a searing new memoir about addiction and recovery by Leslie Jamison to a new book of poetry by Tracy K. Smith, the U.S. poet laureate, there is an abundance of excellent new books to read this April. Need help figuring out what to pick up first? Read the following list to see the 12 books everyone will be talking about this month.

Waiting for Tomorrow by Natacha Appanah (available April 3)This compelling novel tracks the complicated relationship of a married couple, who struggle with preserving their separate identities within their relationship, their individual artistic freedoms, and integrity, and teases out the myriad ways in which we're all capable of destroying our own lives, and the lives of those around us.

Betwixt-and-Between: Essays on the Writing Life by Jenny Boully (available April 3)I live for the in-between of things and, as such, Boully's wild and weird essays, which don't so much straddle different realms as they kind of pierce right through, coming and going, like a needle weaving disparate things together, but still being its own unique entity, neither this nor that. Boully's thought process, as seen on the page, is a pure pleasure to behold—she's full of delight and her words offer sensations beyond what mere words usually do. This is, I think, because there's real joy here, the joy of discovery; it radiates, and it feels good to bask in its glow.

Varina by Charles Frazier (available April 3)Perhaps best known for his best-selling Civil War novel Cold Mountain, Charles Frazier is back with another narrative tied to that fateful time. This one centers around the life of Varina Howell, who was just a teenager when she married the much older Jefferson Davis, who had not yet but one day would become the president of the Confederacy. Varina lived a fascinating life (in her later years, she moved to New York City and became friends with Julia, the wife of Union general and U.S. President Ulysses S. Grant), but this novel reminds us that complicity during times of evil can never be fully excused.

The Recovering: Intoxication and Its Aftermath by Leslie Jamison (available April 3)A blend of memoir, reporting, history, and criticism, Leslie Jamison's latest is a fascinating account of the recovery movement and of addiction and its place in our culture. The addiction narrative is not a new one in literature, but Jamison does something wholly unique here in the way she contextualizes this ongoing struggle to find balance in our lives, rid ourselves of dependency, and understand why we desire the things that are most likely to kill us.

Wade in the Water by Tracy K. Smith (available April 3)A new book of poetry by the poet laureate of the United States? Do you really need to know more? Well, if so, consider this: Few living Americans use words to the profound effect that Smith does, and in her latest work, she tackles our complicated horror show of the current political reality, and contrasts it with past American struggles, giving our present difficulties some much-needed context. Her words have a glow to them, their shine imprints itself on you, so you can carry them around with you always.

The Female Persuasion by Meg Wolitzer (available April 3)Probably one of the most anticipated books of the season, The Female Persuasion offers readers ample conversational fodder, as it revolves around such hot-button topics as the power dynamics between women, ambition, ego, and desire. It centers around the relationship between Greer, a somewhat meek, insecure college freshman, and Faith, a magnetic leader of the women's rights movement. Wolitzer explores their dynamic and the thrills—and perils—of obsessive hero worship, revealing how all of us want nothing more than to have actual evidence that we are really as special as we believe ourselves to be.

Eye Level by Jenny Xie (available April 3)For a poet so capable of taking readers on far-flung journeys to places like Corfu, Cambodia, and New York, Xie is perhaps most remarkable for her ability to take readers deeper inside themselves than they have ever been. Her poems capture the power within us, the persistent questioning of ourselves that then propels us to move through the world and around it, restlessly searching everywhere for the answers that we fear we can't find within, or maybe just aren't yet capable of answering. Plus with language like this—"For years now, I’ve been using the wrong palette. Each year with its itchy blue, as the bruise of solitude reaches its expiration date"—Xie's work is just a thing of pure, piercing beauty.

Not Here by Hieu Minh Nguyen (available April 10)These dazzling poems by Vietnamese-American poet Hieu Minh Nguyen are exactly what we want to be reading next year, as they provocatively address the in-between spaces in life, those areas between love and longing, pain and pleasure, belonging and alienation. Nguyen's imagery is a sensory wonder, evocative of the depths of trauma and the dizzying heights of hopefulness and desire.

And Now We Have Everything: On Motherhood Before I Was Ready by Meaghan O'Connell (available April 10)This hilarious, brutally honest look at motherhood is a much-needed antidote to all the saccharine writing about parenting out there. One way O'Connell does this is by focusing on her own massive, profound identity shift; too often parenting narratives center around the child—even before they're born. But O'Connell explores, instead, the many anxieties attached to this radical transformation process, one that is almost impossible to be fully ready for, and which can lead to a very real case of imposter syndrome. In a world full of Instagram-perfect motherhood, this dark, funny corrective to all that aspirational mothering bullshit is exactly what we needed.

The Comedown by Rebekah Frumkin (available April 17)Beyond having one of our favorite covers of the year (which isn't important, necessarily, but it also isn't not important), The Comedown also happens to be exactly the kind of wide-ranging, epic story, dealing with all the big issues—love, power, desire, drugs... Florida—that we want to read right now. Frumkin treads through that darkest of comedic territories—America—in this devastatingly smart look at our relationships with those who surround us, who, by accident of birth, are our neighbors, our friends, and our family. That this is Frumkin's debut makes the ambition of the story all the more remarkable.

Every Other Weekend by Zulema Renee Summerfield (available April 17)Let this smart, sparkling debut take you back to the '80s and into the "land of broken homes," wherein every child knows that half of all marriages end in divorce because they spend their time getting shuttled from one home to another. Summerfield centers this novel around the experience of 8-year-old Nenny, who has moved with her mother and brothers into her stepfather's home. Nenny's anxieties blossom, but her perspective remains a lucid view into the burdens that children often carry, the ways they feel responsible for protecting their families. It's a fascinating look at what being a family is really all about.

You Think It, I'll Say It by Curtis Sittenfeld (available April 24)What a treat it is anytime a new book comes out from Curtis Sittenfeld, but we're particularly excited about this short story collection because, did you read "Show Don't Tell" in The New Yorker's June Fiction Issue? It's perfect. In these 10 stories, Sittenfeld explores issues like ambition, desire, marriage, and social media envy—you know, the whole range of the human condition. She brings her unflinching eye, piercing wit, and storytelling gifts to everything she does, making this collection a series of perfect gems, each one worth going over again and again, even as you'll be secure in the knowledge that their shine will never fade, and that you'll always discover a new facet you hadn't noticed before.