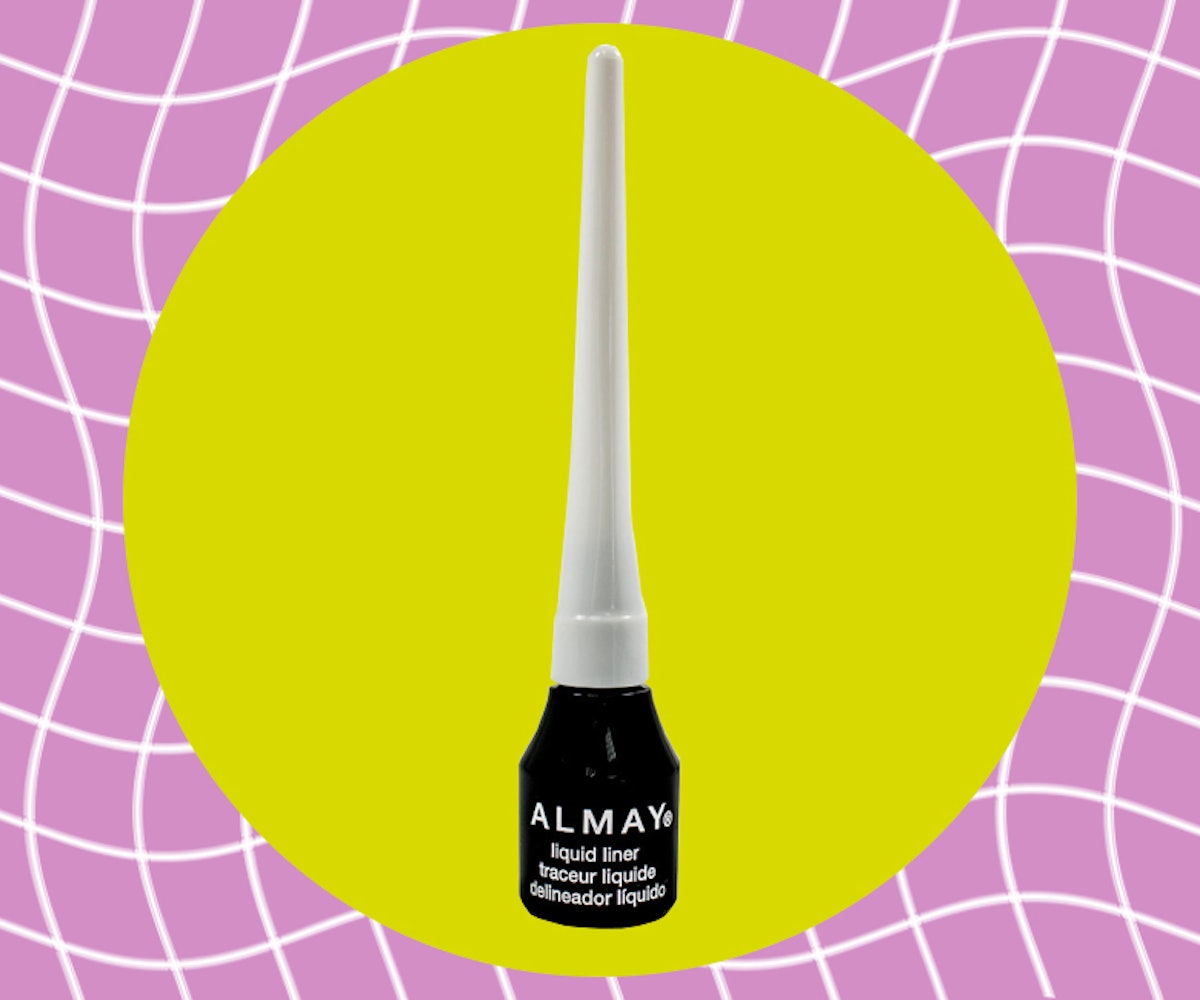 The question I get asked most frequently would have to be: "How do you do your eyeliner?" Considering I'm often sporting a neon shade of hair, the fact that people zero in on my eyeliner is an indication of just how much my exaggerated winged look stands out—a lot. Which means that the second most frequently asked question I hear is: "What eyeliner do you use?"

So, how do I do it? Practice, practice, practice. Ever since I hit puberty (and discovered Myspace), I've worn some variation of my signature kohl-rimmed look almost every single day. In fact, the only Malcolm Gladwell theory I subscribe to is the 10,000-hour rule, and that's mostly because it took almost a decade for me to go from shaky lines and watery eyes to being able to give myself a flawless cat-eye in under five minutes. Seven, if I'm on the subway.

As for the second question (and what is also maybe the real answer to the first question), what kind of eyeliner do I use? Almay’s 16-hour liquid liner in black.

After 13 years of consistent use—literally half my life—I'm finally ready to share why this humble drugstore diamond-in-the-rough is my holy grail. For one, it goes on super-smooth thanks to its short inkwell design, which allows users ample control over even the finest lines. It's also pigmented as hell, which means it gives incredibly deep, dramatic lines. The best part though? Almay's luscious liner lasts for actual hours with no smearing at all. Ever. Seriously!

Well, okay, I've had a teeny, tiny smudge here and there, but that's only in the absolute sweatiest of situations—I’m talking 12-hour raves, sweaty basement shows, and sweltering NYC summers that make me feel like I’m about to evaporate into a disgusting cloud of smog and Secret deodorant. But those smudges were anomalies, not the rule. In fact, even in those hellscape situations, my eyeliner has ultimately persevered—crisp, dark, and smooth as ever. And don't just take my word for it. I’ve converted a good number of other eyeliner aficionados with the gospel of Almay’s 16-hour liquid formula. Once the clock strikes 8am and I’m the one person who doesn’t look like they’re cosplaying a raccoon, it becomes apparent why I've slowly become the Brooklyn club scene's Avon lady. It's honestly a pretty cool gig.

But don't just take my word for it. Almay's godsend of a liner has been a makeup forum favorite, especially for self-proclaimed "emo girls," for, like, ever. The abundance of reviews out there makes it easier to navigate any problems that might pop up, like the fact that it takes a few days of use for the stiff “flex-tip applicator” to soften up and become pliable enough to give you the thick, jet-black cat-eye of your dreams. Once you reach that point though, Almay’s eyeliner is absolute perfection, and you'll never look back. I certainly haven't, and considering I started using this eyeliner at a complicated time in my life, my ongoing obsession with it is all the more notable—like, my deep-seated teenage insecurities might have evolved, but my love for this eyeliner hasn't.

The thing is, I’ve always had a complicated relationship with my reliance on eyeliner. It's not inaccurate to say that when I started using it, when I was 13 years old, it felt kind of like putting on a particularly fierce mask. This was a time in my life when I felt cursed with ample cheek pudge, a face full of raging, hormonal acne, and the sort of severe, existence-shaping depression that exasperates the very real teen angst of feeling like a complete troll. Combine that all with the fact that I worshipped the kind of glamorous beauty glossies that were little more than 200-page ads for Maybelline and Covergirl (whose answer for everything was "more makeup"), and the answer appeared to be wearing eyeliner—and lots of it.

There wasn't much I wanted to emphasize about myself at that point in my life, but I had always told that my eyes were “beautifully shaped,” but “too small” (racism alert). So, why not accentuate what I already had? In the words of Seventeen, I was told to "flaunt what you got, girl!"—though they definitely forgot to tell me that lining your lower lid actually makes your eyes look smaller.

When I first started lining my eyes, it was a lot more toned-down, and it took several years of intense experimentation to figure out what exactly I liked. But over the past decade-plus, my eyeliner has evolved from something I have used not as a crutch for my insecurities, but as a tool for self-expression. In fact, the more confidence I've built, the more extravagant my liner has become—and I think that says a lot more about its impact on me than my initial rationale. It helps me stand out of a crowd, it's an attention-grabber, and—as many other makeup lovers have detailed—I feel invincible when I put on my eyeliner. At the risk of sounding super-corny, it's become an integral part of who I am—not masking me, but making me stand out. So thanks, Almay, for helping me a little on my journey toward self-love via beauty.