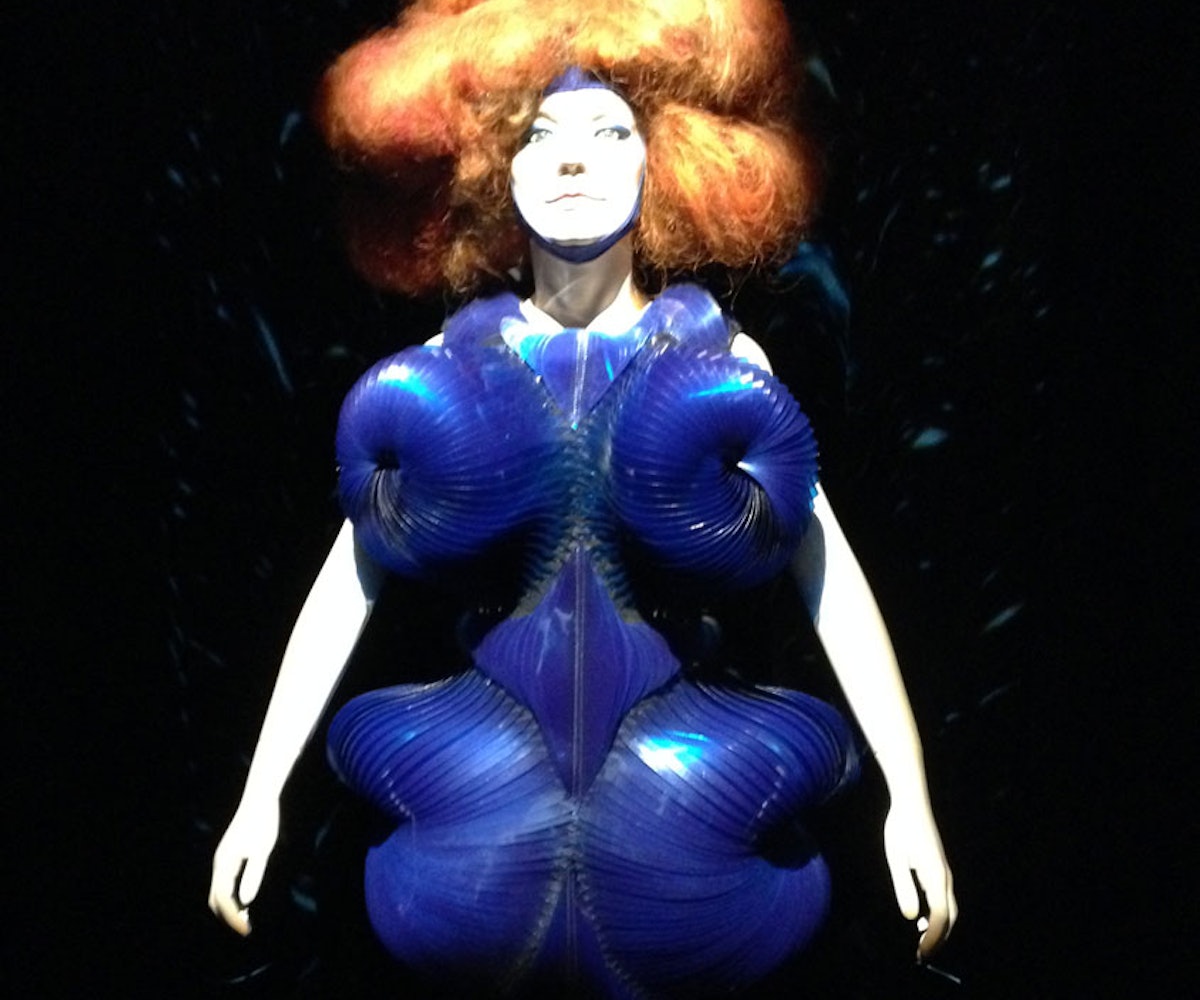 A question hung over me as I entered a press preview for MoMA’s wildly anticipated Björk retrospective: How will the museum display the work of an artist—whose creations are available to us on Spotify and YouTube—in a way that feels exciting and new? The answer became clear as I snaked through a cramped and somewhat disorienting exhibition of her nearly three decade career: They won’t.

I first discovered Björk in 1995, when the album artwork for her sophomore release, Post, was painted large on the wall of the HMV in downtown Toronto. There she was: a mythical creature of arresting beauty, with raven-black hair and wearing a jacket that appeared to made out of envelopes. Where did she come from and who was she? The answers to both of those questions, I’d find out, were Iceland, and one of the most unique and influential musicians of her generation.

At the time, Björk made catchy, cutting-edge, gloriously weird music that sounds like bubblegum pop compared to the surreal sonic landscapes she’s been exploring over the last decade or so. And you could say that as Björk’s music got less accessible and her wardrobe more otherworldly, she became more worthy of a career retrospective at an institute of contemporary art like the MoMA.

Which brings us back to that initial question. What could the MoMA, and particularly its curator-at-large Klaus Biesenbach, do to recontextualize and reimagine Björk’s work? What would they reveal about an artist who has made a career out of revealing herself? They began by placing some of the instruments she used to make her seventh album, Biophilia, in the lobby. In typical Björk fashion, these instruments had names like “gravity harp” and “Tesla coil,” and were rigged to make them play on their own. It worked as a nice tease and a small reminder of Björk’s singular vision as a musician.

The real exhibition doesn’t begin until you get to the second floor, where you’ll find a cavernous theater with red, rectangular cushions and a big screen playing all of Björk’s music videos one-by-one on a continuous loop. Björk’s videos are as large a component of her artistic identity as her songs, marrying them with visuals that can sometimes be breathtaking (“Joga”), terrifying (“Army of Me”) and transcendent (“All Is Full of Love”). Sitting in the theater with about thirty other transfixed journalists, I was reminded of this. The schizo beauty of “Hyperballad” segued into the gonzo animation of “I Miss You,” and on it went, all of it in high-definition surround sound. Seeing them projected with such grandeur made the idea of watching them on YouTube seem unfair to their creators.

I would have stayed longer, but I had to get in line for my appointment viewing of the “Songlines” exhibit, which, billed as a “psychographic journey," is meant to be the retrospective’s showstopper. And here’s where it gets problematic. Billed as a first-of-its-kind museum exhibition that uses words like “immersive” and “3-D” to raise your expectations, “Songlines” pulls off the impressive feat of being overwhelming and underwhelming at the same time. Upon entering the exhibit, you’re given an iPod touch and a pair of state-of-the-art headphones, and told to walk forward.  A soothing female voice comes on and begins recounting a fable about “a girl” as Björk’s music overlays it. (The full story, called “A Triumph of the Heart,” is a lyrical retelling of Björk’s life by the Icelandic poet Sjón.)

“Once there was a heart, a human heart that lived inside a girl,” she said in a Björk-like accent (I later found out this was Icelandic actress Margret Vilhjalmsdottir, who’s known Björk since they were both teenagers). As she tells this first chapter, the word “Debut” appears on your phone and you realize you’re in a room dedicated to Björk’s first album of the same name. The idea behind the exhibit reveals itself: Each room is dedicated to one of Björk’s seven albums, and you will travel through them looking at artifacts from Björk’s life and career, as the narrator poetically takes you through the evolution of Björk. The phone geolocates you within the exhibition, and plays the corresponding chapter.

But the fatal flaw behind this idea is an advancing timeline that appears at the bottom of the iPod screen in each room—the kind you find at the bottom of any video player. As it inches forward, you’re acutely aware that your time in each room is finite, and you’re meant to move forward once the chapter is done. (The recommended time is five minutes in each room, forty minutes total.) This left me constantly checking my iPod to see how much time I had left in this room, instead of focusing on the actual items on display. Ironically, a male voice sometimes interrupts the narrative to tell you to “take your time,” which is exactly what I felt I couldn’t do. (To make matters even more rushed, the exhibit is stationed with security guards who all but force you to move forward and do not let you go back.)

But even more ironic is that these rooms aren’t even worth spending all that much time in. They’re filled with artifacts from Björk’s life as an artist, some more well-known than others. There are diaries and journals from when she was a surrealism-obsessed youngster, her iconic Marjan Pejoski-designed swan dress from the 2001 Oscars, and various outfits and props from her music videos, like the lovemaking androids from “All Is Full of Love.” (One inexplicable item that sums up the meh-ness of the “Songlines” exhibition is the album cover from her album Homogenic, which is animated so that Björk blinks. Cool!) As a Björk fan, these are neat to see, but are they worth waiting thirty minutes in line for? The answer is probably not.

One floor below, they were showing a MoMA-commissioned video called Black Lake, which is essentially a ten-minute music video for Björk’s song “Black Lake,” off her latest album Vulnicura. It looks like just like a Björk video—she’s doing interpretive dance in a volcanic Northern landscape as the camera spins and soars—except it’s playing on two wide screens in a cocoon-like room that was specifically engineered to dazzle your eardrums (6,000 soundproofing cones cover the walls and ceiling). Before the video began, Björk herself emerged from a side door with Klaus Biesenbach wearing a bizarre cactus-shaped headpiece. I couldn't really tell because she remained submerged in darkness.

"I’m very grateful that Klaus [Biesenbach] convinced me to do this exhibition,” Björk said. And then, summing up my overall impression of the exhibit, she added, “It’s been quite a journey."