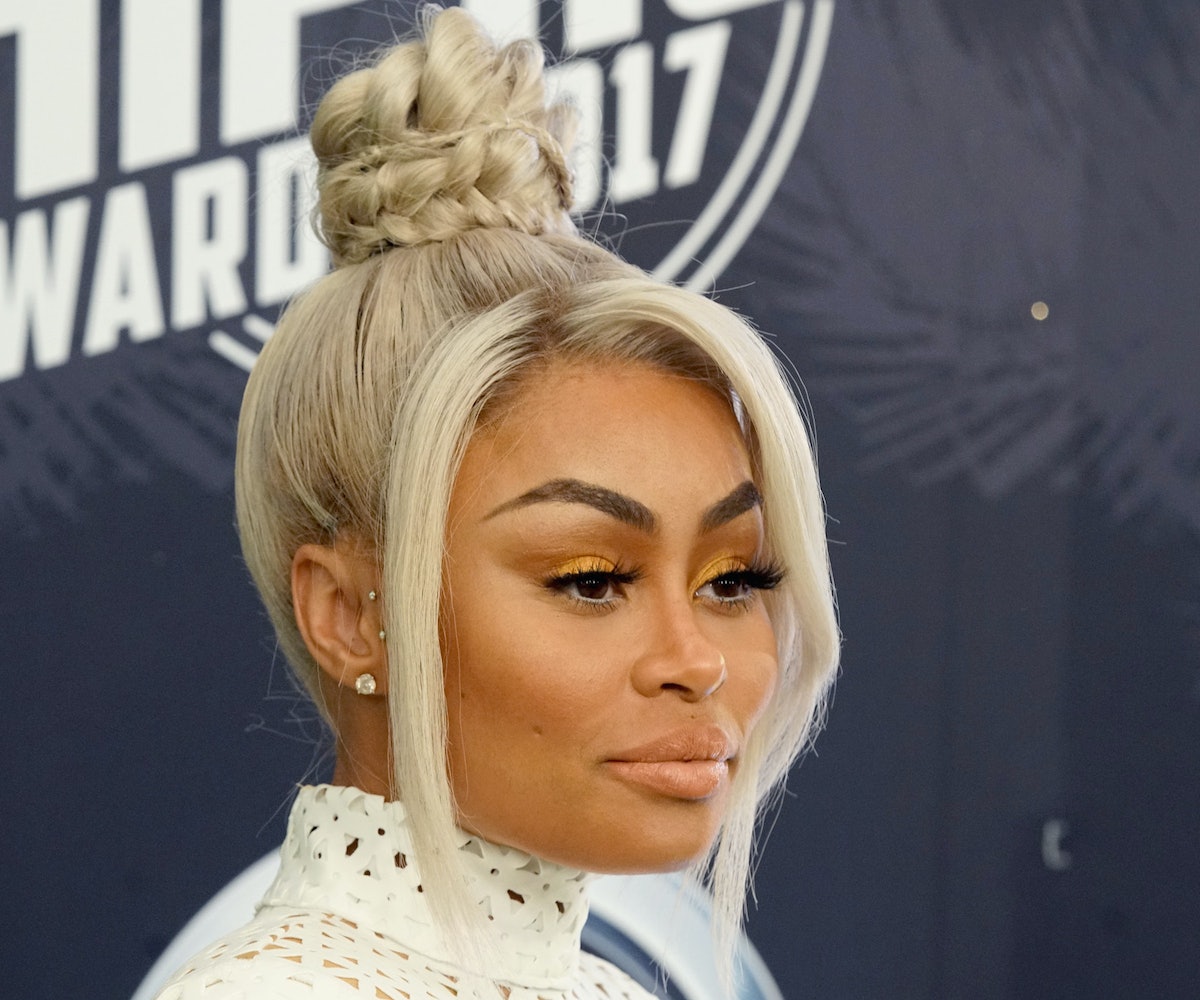 Blac Chyna is reportedly getting law enforcement involved after a video of her "performing oral sex on an unknown partner surfaced online" yesterday.

The latter is exactly what happened, as could be seen in a slew of tweets, as well as an article titled "Twitter Isn't Impressed With Blac Chyna’s Sex Tape." This would be troubling at any time, but especially so in a time of heightened discourse around issues of sexual harassment. But it's hardly surprising, and is in fact reminiscent of the scornful commentary Chyna was also subjected to following a previous leak, when her ex Rob Kardashian (who is also the father of Chyna's one-year-old daughter Dream), posted Instagrams of Chyna's nudes following the couple's split. Though this is a blatant example of abusive revenge porn, that didn't stop the internet from gleefully slut-shaming Chyna for this devastating act.

The critiques of Chyna seem to be even more harsh than usual, and there is little doubt that this is because Chyna used to be a sex worker. However, simply because this is the case, it does not mean Chyna has given up her right to privacy, or that she should be shamed for her sexuality. And yet, Chyna has long been subject to a barrage of malicious, derisive commentary rooted in sexist presumptions based on the fact that she used to be a stripper, including the idea that people can “critique” her “performance,”  just because Chyna was a sex worker. The fact is that Chyna gets treated very differently from the other "respectable"—and often white—celebrities who have been the victims of leaks. And this isn't a coincidence.

As Roxane Gay noted in her essay for The Guardian about the notorious 2014 hacking incident that leaked the private iCloud images of hundreds of celebrities, most of them women (aka the Fappening): "Privacy is a privilege. It is rarely enjoyed by women or transgender men and women, queer people or people of color."

"When you are an Other, you are always in danger of having your body or some other intimate part of yourself exposed in one way or another," Gay wrote. "A stranger reaches out and touches a pregnant woman’s belly. A man walking down the street offers an opinion on a woman’s appearance or implores her to smile. A group of teenagers driving by as a person of color walks on a sidewalk shout racial slurs, interrupting their quiet." And, obviously, if one occupies the intersection between any of these identities, the likelihood of being criticized for something that would be defended were the subject someone different (i.e. rich, white women) is upped substantially. This is also a sentiment that Chyna's friend and fellow ex-stripper Amber Rose pointed out in a recent interview with PAPER, saying, "I do almost get angry at the fact that I started [the SlutWalk movement] four years ago, and I have reached out to so many celebrity women to help me fight this fight, and they felt like I wasn't good for their brand."

"Maybe because I used to be a stripper, or maybe because I'm extremely outspoken, but they didn't want to help me, and now I see them at the Golden Globes and they're wearing black and all of a sudden they're feminists," Rose said, adding later that, "All of a sudden, all of the women that are in $20 million movies are coming out and now everybody wants to help."

It shouldn't take ample explanation to deconstruct what's wrong with continuing to languish in the public humiliation and emotional trauma of another person, especially if it all seems rooted in a quest for brief virality. But to use Chyna's past profession—one she pursued in order to afford college—to ridicule her perceived sexual abilities is a whole other level of despicable. What happened was not a "performance," it was an exploitation of Chyna's personal sex life for internet fame, and it's a shame to see the majority of Twitter commentators deride her and by extension, victim blame her, for yet another shattering violation of her privacy.