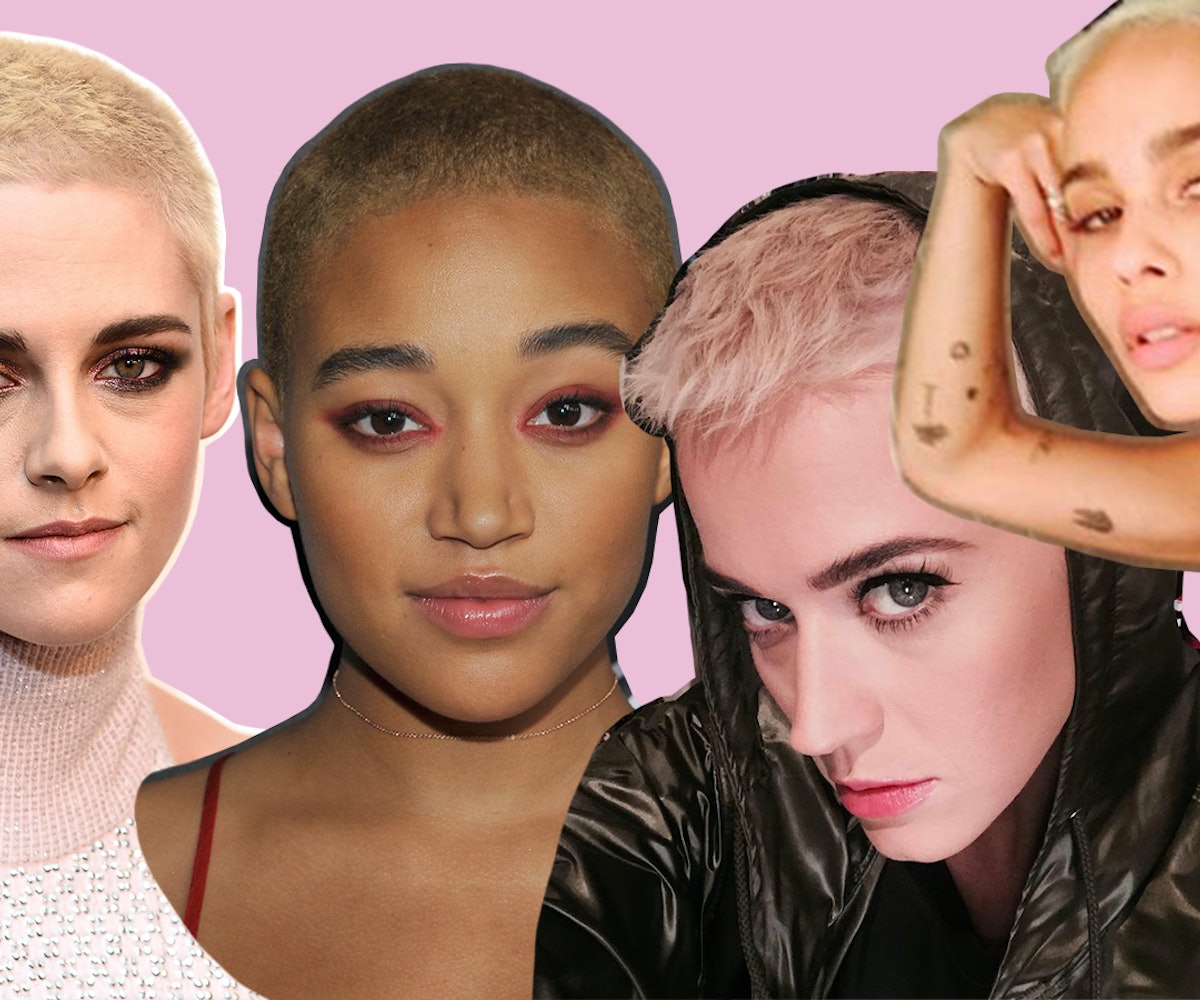 Start taking notes, everyone—it seems that the hair trend of 2017 is coming to light. And no, it’s definitely not unicorn hair.

Meet: the bleach-and-buzz. While, of course, a platinum blonde buzz cut is nothing new (hello, Amber Rose!), it’s definitely having a moment right now. Ever since we flipped our calendars to 2017, it seems that every month, at least one or two of our favorite celebs are trading in their full and long locks for the bleached blonde buzz cut. Okay, maybe not all of them are actually buzz cuts, but they are majorly short crops, which is just as daring in our opinion.

Going for the buzz—or close to it—is a major commitment, as there’s really no turning back once you take the leap. We salute these celebs for their bravery, confidence, and ability to rock this androgynous trend flawlessly.

While a few of these hair transformations were results of movie role preparation rather than personal taste, we can’t deny that we’re totally into this new look circulating the celebrity beauty circuit. In fact, we may even muster up the courage to try it for ourselves. (Just maybe.)

Below, read on about our favorite cropped blondes of the moment.

Kristen StewartWe firmly believe that K. Stew can do no wrong, so when she stepped out with this buzzed, blonde magic, our hearts melted (and the internet broke). According to Vanity Fair, Stewart was interested in going for the chop for some time, when a movie role urged her make the leap. In her upcoming role in Underwater, Stewart plays an mechanical engineer who works at an underwater oil rig, and the look totally suited the character.

We just hope she keeps this look long term (and not just during the filming of the movie) because we’re totally obsessed.

Zoe KravitzEarlier this month, Zoe Kravitz jumped on the bleached-and-buzzed bandwagon, chopping off her gorgeous blonde braids for a super short crop. According to Zoe Kravitz’s hairstylist Nikki Nelms, it’s not actually a buzzcut, but it still hews to the trend pretty closely. She also announced her new look in the most “IDGAF” way: a two part Instagram series titled “Oh shit.”

Katy PerryWhile Katy Perry had already been rocking a short ‘do since March, having chopped her shoulder-length lob into a Michelle Williams-inspired crop, it must not have satiated her appetite for shorter locks. Just a month later, she went to even greater lengths to, well, take off more length. Perry is now sporting an almost-buzz cut length pixie, and looks totally badass.

Amandla StenbergBack in January, Amandla Stenberg traded in their gorgeous curls for a seriously short buzz cut with just a slight hint of dark blonde—quite a way to kick off the new year. The actor took to their Instagram to announce the dramatic cut before debuting it at the Golden Globes, explaining to her fans and followers that the cut is actually for their upcoming role in Where Hands Touch, a story about biracial children growing up in Nazi Germany. They’ve long been an advocate for women of color rocking natural hair styles, and we're totally in love with this strong new look.

Cara DelevingneCara Delevingne made headlines earlier this month when she opted for a daring new pixie cut. Exaggerated reports that she “shaved her head” and “got a buzz cut” were circulating the media when in reality, her new look was not that extreme. While all of the buzz wasn’t exactly a buzz, we were still major fans of this platinum crop.

Then, earlier this week, Delevingne did, in fact, shave her head. Completely bald—and with a Snapchat story to prove it. However, Delevingne was not following a trend with her new look. Rather, she was preparing for her role in her latest movie, Life in a Year, where she stars along side Jaden Smith as a cancer-stricken young woman who is given one year to live.

Justin BieberWhile a buzzcut isn’t anything new for Justin Bieber, his most recent cut and color was super hyped up—most notably for the fact that he and Kristen Stewart suddenly looked like long-lost twins. This, of course, sparked a slew of “Who rocked it better?” stories all across the internet. And while we’re forever K. Stew's #1 fans, we must say the super bright white blonde suits the Biebs pretty well too.