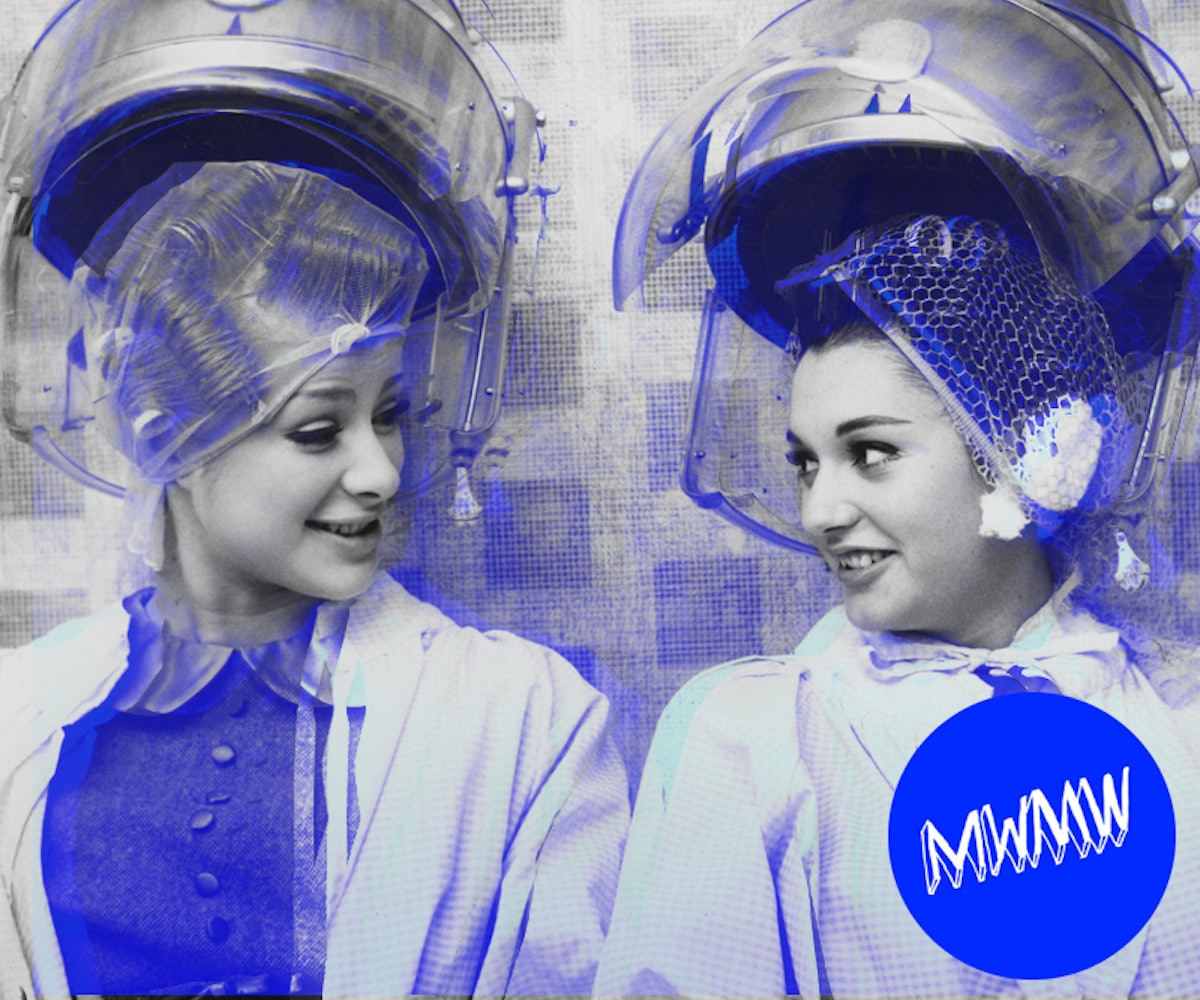 Blondes may have more fun, but gentlemen prefer blues. Or at least, those gentlemen with a fondness for the inexplicable habit of catcalling.

At 26, I went through a delayed onset of the goth stage and drenched my (Manic Panic-ed) red hair in a box of black hair dye. For those who don't know, removing permanent black hair dye, especially box dye, is a near-impossible task, something I was pitifully uneducated on. Yet, at 28, despite my fondness for how good black hair looks with my fair skin when I rock a red lipstick, it was time for a change. One can listen to The Downward Spiral, 22 years after its release, and still take themselves seriously only for so long. I let my brown roots grow in, and when I got bored, visited my hair stylist to see what she could do to help me grow them out in a more interesting way. Her solution was the color root trend—which if you see on someone with dyed black hair, you can be sure that they are also in the process of de-gothing. We bleached my locks out, and then opted for blue.

On my walk home, it started. The catcalls, coming in more frequently than usual—and now they had a new name for me: “Hey BLUE!"

One hair chameleon’s theory is that colorful hair acts as an icebreaker of sorts—for the good and the bad. “[Colorful hair] gives people—creepy guys, cool girls who want to be your friend, catcallers on the street—an easy in to talk to you, which can be a super good thing in some respects, but it's really exhausting,” Casey, 24, says. Currently at her natural color, she says she got the most attention when her hair was emerald green and blue. “I got this idea to start checking Missed Connections to see if people were writing about me. I figured this was the one time I could know for sure that it was me. There aren't many girls with long emerald green hair and bangs. I would see a ton of posts, like probably four or five. I never ever contacted anyone, but it was an interesting vanity project to undertake.” Studies have found that women with tattoos appear more DTF. Could the same be true of brightly colored hair?

For me, used to enjoying the benefits of the don’t-come-near-me vibe of raven black, by week three, the increase in bodega conversations, subway direction requests, and, worst of all, catcalls, was exhausting. Speaking to other colorfully haired women, I quickly understood that I was not alone. “When I had blue hair, men would follow me around, and one even started touching it,” Sarah, 25, says. “This was in Wisconsin, and many people in more rural areas would just point and stare. I ended up tucking it all up under a beanie whenever I went out.” For Sarah, it became so bad that she went to black, and says she immediately noticed a shift in the way people treated her, a reversal of my experience. “People notice me, and not just the hair when it's black or blonde,” says Sarah. Casey too eventually traded the bright colors for a classic color hue for a much-needed respite from the unwanted attention. “I got really tired of it after like four months. Being 'the girl with the cool hair' can get really taxing on a day-to-day level,” she says.

Although I wasn’t ready to let being chased down by a blue hair fetishist on the way to the dentist deter my enjoyment of having Smurf-like hair, I feel their pain and feel angry that catcalling can ruin one more thing, the joy of bright hair, for women. (Insert mandatory reminder that no, women do not enjoy the attention of catcalls, and this sort of attention is not why women change hair colors. It's just a fun thing to do.) As the blue starts to fade, I’ve already picked up my next selection: Manic Panic Ultra Violet, in part because shifting from blue to purple will make it easier to eventually take my new hair growth back to red without additional bleaching. Perhaps, I too, have been deferred by the attention of a hair color that doesn’t occur in nature.

Katy Perrys of the world, I salute you for your braveness.