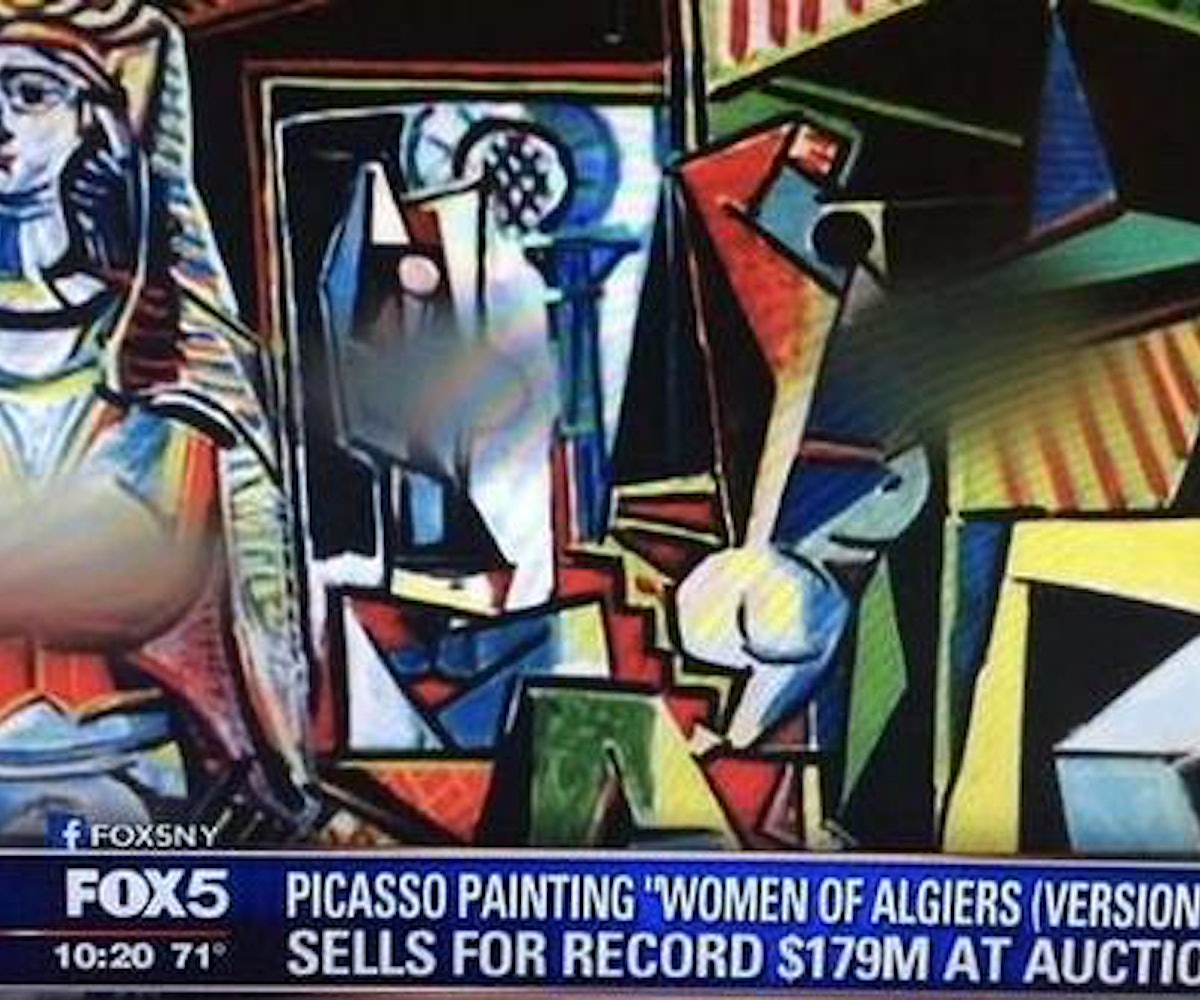 Earlier this week, a Picasso painting sold at auction for $160 million, becoming the most expensive painting ever sold. “Women of Algiers (Version O)” (1955), the cubist depiction of a group of nude courtesans, was part of a series done by Picasso inspired by Eugène Delacroix's 1834 “Women of Algiers in their Apartment.” It's been widely lauded as a late period return to form for the Spanish master.

Naturally, the record-breaking sale has been covered by news media around the world, nearly all of which has focused on the historical, commercial, and creative significance of the painting, and its context in the art market at large. All of which is very interesting, but certainly pales in comparison to the fact that there are a couple of breasts on display—at least according to a New York Fox affiliate, whose segment on the sale this week came complete with a blurring of the painting for any viewers who might be offended by such obviously provocative smut.

Then again, it seems pretty safe to say if you're reading a pornographic take into an abstract painting of women's bodies, it might not be the artist who's at fault.

The blurring of the painting was met with well-deserved derision from viewers online.

“This is mind-numbingly dumb/infuriating: @MyFoxNY censored the cubist breasts in Picasso's record-setting painting,” wrote one. “Really @MyFoxNY, you're censoring a Picasso?! That's beyond prudish. It's ridiculous and insulting to your viewers.” added another.

New York magazine art critic Jerry Saltz joined in the chorus. “How sexually sick are conservatives & Fox News?” he tweeted in response to the censoring. “They blurred parts of the Picasso painting. #SickMinds”

It's an issue that Saltz, and others in the art world, are becoming all too familiar with of late, and by of late I mean the entirety of human history. But this sort of Puritanism has a surprising sticking power even in 2015. Back in March, Facebook suspended the critic's account for his habit of posting “risque” artwork to his page. Meanwhile, a French court has agreed to hear the case of a teacher whose account was suspended after he posted an image of Gustave Courbet’s "The Origin of the World." Similarly, the Univision network censored a depiction of Michelangelo's David last year.

All of which comes in the midst of the #freethenipple campaign on social media, in which women around the world, including, notably, celebrities like Chelsea Handler, have been pushing back against Facebook and Instagram's sexist policy of considering men's bare chests as fair game, but not women's. Breast-feeding photos, in particular, have served as a common point of contention with the notoriously squeamish social media behemoth.

Censorship of art hasn't just been limited to painted sex babes who exist to torment the pure minds of news viewers everywhere, of course. Earlier this year, reports on the deadly attacks on the offices of Charlie Hebdo found numerous publications around the world, including the Associated Press, self-censoring images of the French satirical magazine's depictions of the prophet Muhammad. And while one can reasonably debate the merits of that decision, where, as we saw at the recent shootings at a “Draw Muhammad” contest in Texas, there is the threat of real world violent retaliation, one can't help but wonder who exactly is at risk of being offended by Picasso's cubist boobs.

For their part, the station has acknowledged how stupid they came across in this whole thing, and

addressed it on a segment the following morning

A source at the station explained the situation:

"The reason this happened was we had a fill in guy, he got nervous and didn't know what to do. He blurred it, and then this ridiculousness happened. That's why [morning host] Greg made the joke about it, he kind of choked. It's ridiculous to think this needs to be blurred out, it's art, not like it's real nudity."