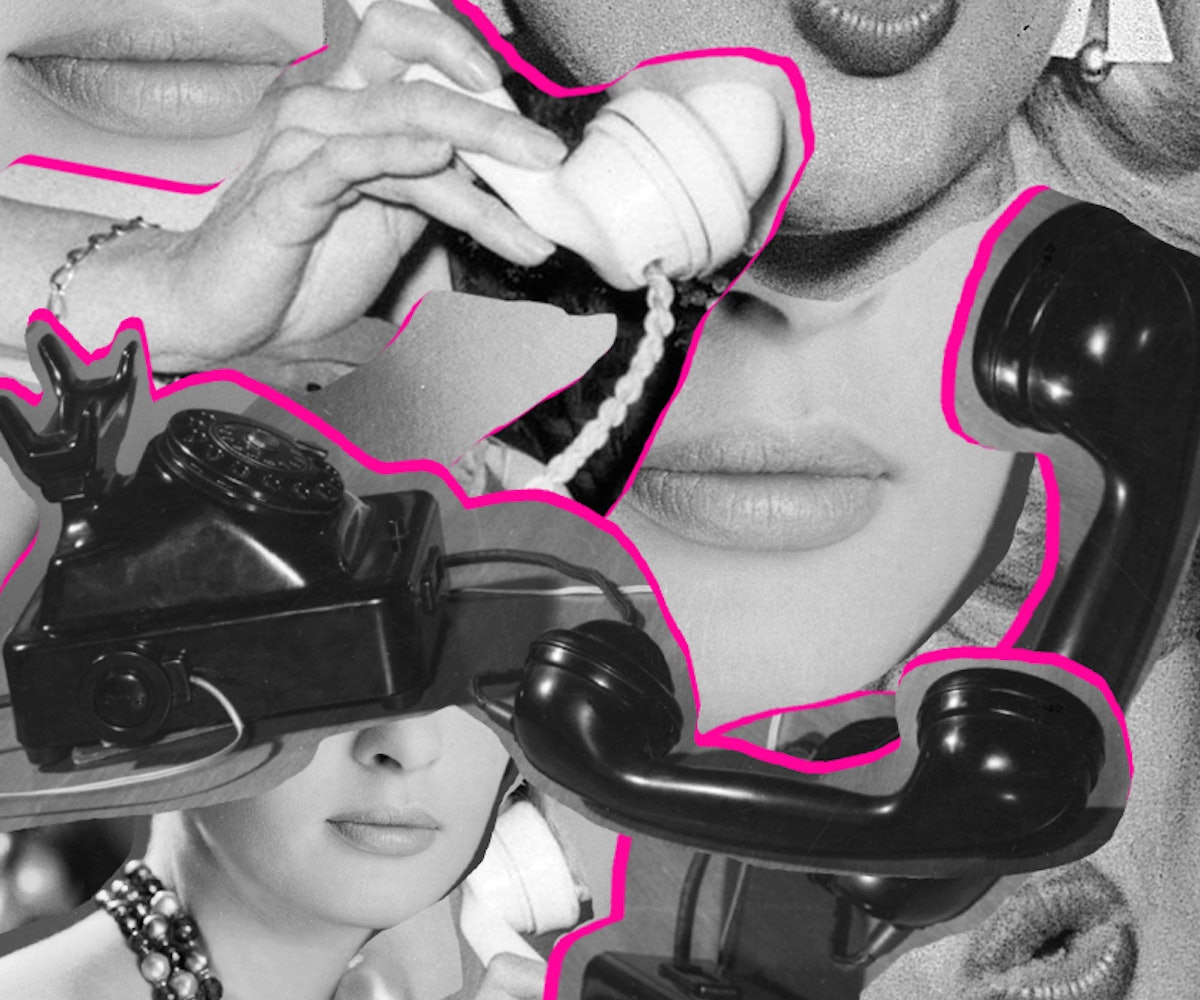 It all starts familiarly enough. You meet a cute new human; conversation sparks, it grows more effortless, topics dig deeper. With so much outside stimuli and forces of distraction writhing around our little globes, it’s amazing people ever connect—so naturally, you gotta feel stoked at this point. Then, one of three things usually happen: you become friends, lovers, or this weird in-between nebulous.

That hazy middle ground—where emotional vulnerability happens but sex does not—is where things get complicated.

It’s almost cute to recall the heyday of booty calls—the idea of hitting someone up when frisky feelings take hold. But with widespread access to a bevy of platforms, getting laid is no longer the problem. The new problem is finding someone who will listen to the nuances of your day or the untangling of a problem at work; someone who will respond with empathy to a verbal dissection of a complicated familial structure.

Hence, what we’re officially calling boohoo calls: non-mutually beneficial relationships that hinge on one party's ability or willingness to provide emotional satisfaction. Like traditional booty calls, but instead of seeking ass, these people make calls (or more likely, send texts) to find comfort.

For a long time, formal romantic partnerships were the go-to for both emotional and sexual satisfaction. Society’s gradual acceptance of female sexuality as well as widespread access to birth control changed that.

Sex researcher and writer Dr. Zhana Vrangalova elaborated on the phone: “As soon as more casual encounters became available—or acceptable, or more easy to make happen, thanks to online dating, thanks to hookup apps, thanks to whatever, just social norms becoming more open—I think people have gone out and tried to seek satisfaction of both of those needs in these more casual contexts.”

By seeking emotional satisfaction outside a romantic relationship, friendships, or therapists, we cobble together desirable traits from a number of different people.

“In today's society where just a click of a mouse, or a swipe of a thumb, you've got thousands and thousands of potential romantic interests, it's very hard for people to sort of settle on one decision,” relationship psychologist Dr. Wendy Walsh says.  “A paradox of human choice is that the more choice a human has, the harder it is to make a choice. Who has one entrée at a Vegas buffet? What happens is we need relationships. We need them for our emotional health. We need them for our physical health. So what people are doing is taking an appetizer off the buffet, or taking a piece of one entrée off the buffet, because they can't make a decision to settle down.”

Not to be confused with a mutually beneficial, healthy friendship, boohoo calls and their developing arrangement hinge on one party’s emotional availability. In other words, you wouldn’t hit up a traditional booty call unless ready to throw down with sex stuff; you wouldn’t hit up a boohoo call unless real-life shit was going on and you needed comfort. Symbiosis isn’t necessarily part of the deal.

Boohoo call victims, or “emotional secure bases,” as Dr. Walsh says, may fall into patterns in hopes that the one-sided emotional openness could lead way to a romantic relationship, or at least sex. On the other hand, many who pride themselves on being “nice” use the opportunity to practice said characteristic.

“I am happy to help, period, as a friend,” Seth*, no stranger to answering boohoo calls, told me over GChat. “That’s the essence of friendship: when someone calls, you’re there for them. But reciprocity is important. And I basically stopped taking calls when I realized that these people weren’t going to be there for me when I needed them.”

People can be afraid of coming off gruff or coldhearted when approached by someone going through a tumultuous time. So, they listen. “I'm not even romantically interested in him in the least, I'm just too nice to tell a sad person to leave me alone,” Amy* emailed me about her current (doubtful) arrangement in which she usually picks up a specific boohoo call. But why let it perpetuate? “[I feel] like, ‘I must be a good listener!’ or ‘Hey, it's cool this person thinks they can confide in me!’ but then I started thinking, ‘You know, it could be that I am literally the only person who will listen to you.’”

Amy is self-actualized and reflective—two things not necessarily applicable to all people. “What most people do is they kind of go along with whatever's happening, and they let these things happen to them without a lot of intention, or agency,” Dr. Vrangalova says. “So people end up in these relationships that are asymmetrical.”

I told Seth about my own experience on the receiving end, namely one bond resulting from a chance one-night stand before we both returned to our own corners of the country. With shocking regularity, this man I barely knew lit up my notifications with panicked thoughts and fears, trusting I’d pacify him. Usually, I would. “That would make sense—once there's a level of physical intimacy established, the walls come down,” Seth said. “Or they're trying to keep you on the back burner.”

Dr. Walsh agreed that many boohoo call offenders unknowingly qualify their victims as such. “Men and women are on a different fertility schedule, as much as women like to ignore the fact and worry more about freezing their eggs than finding a good husband or father,” she says. “What happens is there is this anxiety about finding a mate, but at the same time they're having so much fun because sex is such a delicious drug and it feels so good. They're having short-term relationships and keeping various people out there who might or might not be somebody... Sort of like a game of musical beds. When the music stops, that's a back burner person they could potentially go to.”

If that sounds selfish, that’s because it is.

“All of human mating is a selfish tactic,” Dr. Walsh says. “We would love to think that love is about Cupid’s bow suddenly striking, but unconsciously, it is cold and it is calculating and it's about survival of the fittest.”

Bottom line: As soon as those on the receiving end realize the relationship’s limitations and stop picking up, it’s over—which is a good thing. Boohoo calls, by definition, are doomed to exist in only a finite period of time before that previously mentioned buffet grows vile. Someone, at some point, will get hurt. Self-actualization and honesty—being upfront about what you want/can offer, and demanding the same in return—is key. “You should try and go get your needs met in places where you could actually get your needs met,” Dr. Vrangalova says. “You don't go to a Japanese restaurant and order burgers. Don't go to someone who just wants to give you sex if you want to cuddle and feel more emotionally connected.”

*Name has been changed