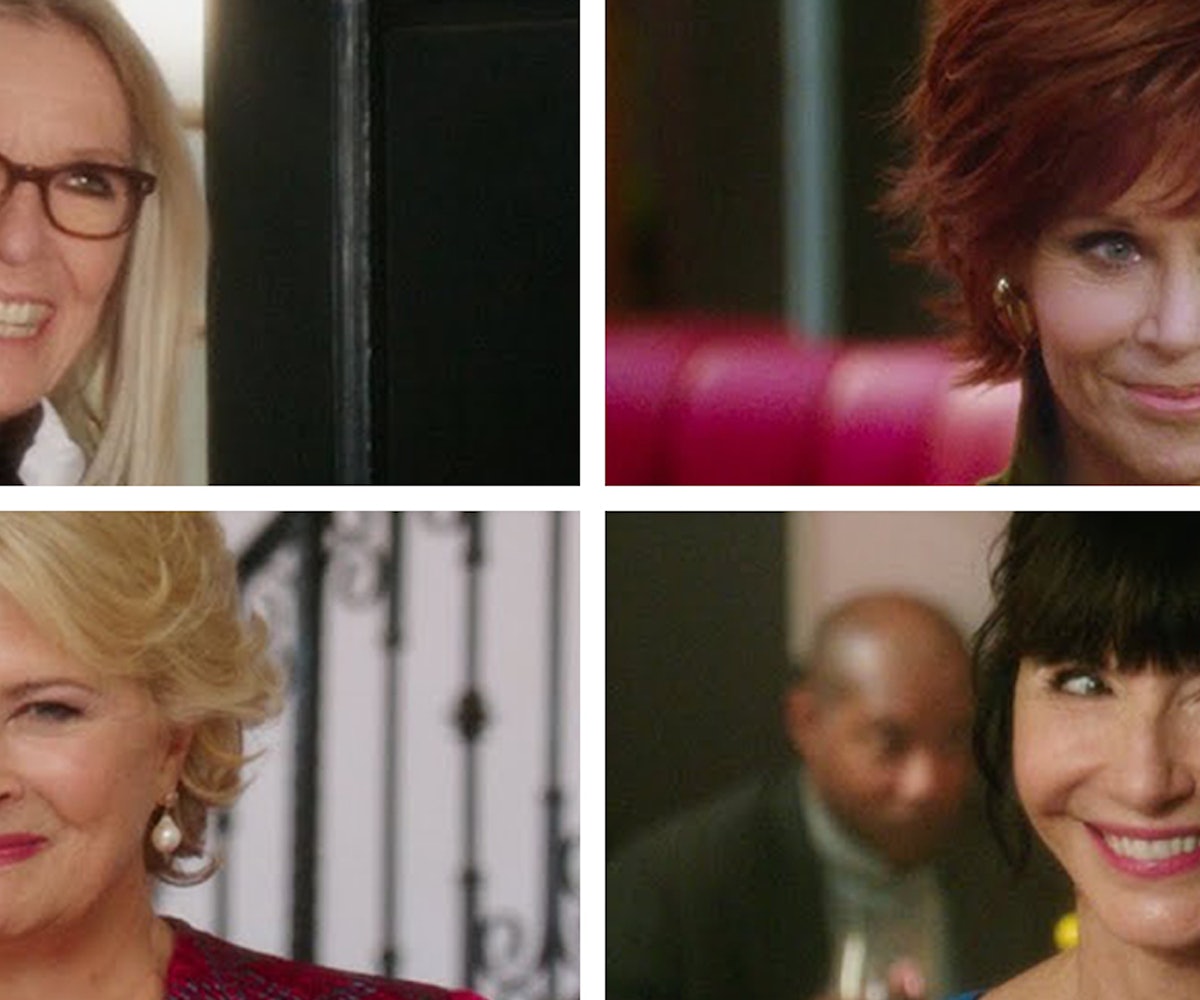 Though it’s not uncommon for a TV series to do a full-episode homage to a particular movie or make a pop culture phenomenon into a plot point, the number of movies that do the same—bake a particular item of popular culture into their premises—is relatively rarified. Those that make it through tend to address obsessive-friendly genres like sci-fi; earlier this year saw Dakota Fanning as an autistic Star Trek fan in Please Stand By, and it may not have been a hit or even a cult movie, but Fanboys is a whole movie about Star Wars fans trying to see The Phantom Menace early. But Book Club, opening today, looks like such an act of Fifty Shades of Grey fandom that it’s confusing to realize that Universal, the studio behind the Grey adaptations, didn’t produce it as a kind of companion piece. Instead, a Paramount Picture has its characters reading all three Fifty Shades books, covers frequently visible, and sometimes quoting from the less purple bits of prose (the movies, though, are mentioned only in passing).

Of course, unlike the Fifty Shades movies, Book Club is rated PG-13, so it can’t get too far into the S&M-tinged non-adventures of Christian Grey and Anastasia Steele. In fact, the movie’s relationship with the book series turns out to be a strange one, promotional yet distanced. The women whose lives are “changed” by reading the series are four longtime friends: Diane (Diane Keaton, really owning her frequent blur between actress and character), recently widowed and overparented by her worried daughters; Vivian (Jane Fonda), an anti-commitment businesswoman; Sharon (Candice Bergen), who never jumped back into the dating pool after her divorce; and Carol (Mary Steenburgen), whose once-robust sex life with her husband has taken a bad turn.

It’s Vivian who insists that the club tackle Fifty Shades, over the protestations of Sharon (it’s too smutty!) and Diane (it’s intellectually insubstantial!). The book catalyzes changes in the quartet’s romantic lives; what could be a cheesy trailer line in a movie about sassy older ladies has been spun off into a whole movie. Yet none of these women’s stories have very much to do with Fifty Shades, apart from the fact that it gets them thinking about sex; as such, the movie weirdly implies that this series is a groundbreaker for having sex scenes in it at all. The club’s tastes aren’t exactly doily-friendly; their unnamed previous selection, we surmise, was Cheryl Strayed’s Wild (their majority dislike of it is probably one of the most realistic aspects of the actual book club scenes, up there with the fact that they very rarely discuss the books in much detail). Fifty Shades mostly affects these women by, uh, being read around the same time that three of the four are simultaneously presented with new romantic options: an old flame for Vivian, a new one for Keaton, and a decision to try a dating app for Sharon. Of those three, only Sharon takes an active role; men pursue both Vivian and Diane. Carol’s story is most actively inspired by her reading but doesn’t touch anything more sexual than a couple of Viagra and some boner jokes.

Book Club isn’t a terrible movie. Though, it’s not very good, either, full of green screen and soft focus and interminable resolution of flimsy conflicts, each less consequential than the last. But it’s cute, corny in the right ways, occasionally funny, and the four veteran actresses are a pleasure to watch (Keaton, particularly in her scenes with new boyfriend Andy Garcia, tones down some of her mannerisms without losing an ounce of her Diane Keaton-ness). As far as ensemble rom-coms go, it beats the hell out of anything Garry Marshall made with much bigger casts.

But its relationship to Fifty Shades is purely a marketing hook, and it’s a fascinating one given how selective the movie’s other reference points are. There’s Wild, there’s a pretty solid Werner Herzog joke (!), and there are strong soundtrack cuts throughout, not remotely of the Nora Ephron too-vintage-even-for-older-folks variety (Tom Petty, Paul Simon, Bob Dylan, and Crowded House all get spins), along with some idle chat about vinyl making a comeback. But director-cowriter Bill Holderman (a producer for late-period Robert Redford projects) has made a pop culture-inspired movie that seems downright ginger about engaging with pop culture, even though he seems to have a pretty good taste.

And speaking of taste: What’s most disappointing about these ladies reading Fifty Shades is how uncritical they are of it. Obviously, Paramount isn’t going to license the book and court its readers just to throw shade, but do none of them find anything to object to in these books beyond some initial pearl-clutching over content? The atrocious writing, perhaps? Even their eventual conclusion that Fifty Shades is more romance than erotica, while totally supportable (they started as Twilight fanfic, don’t forget—never forget!), lets the books off the hook. They’re all about love! Just like this movie! Book Club may not be a great movie romance, but it’s a little off-putting that no one in it seems to realize that, at minimum, it’s sweeter and more romantic than Fifty Shades of Grey.