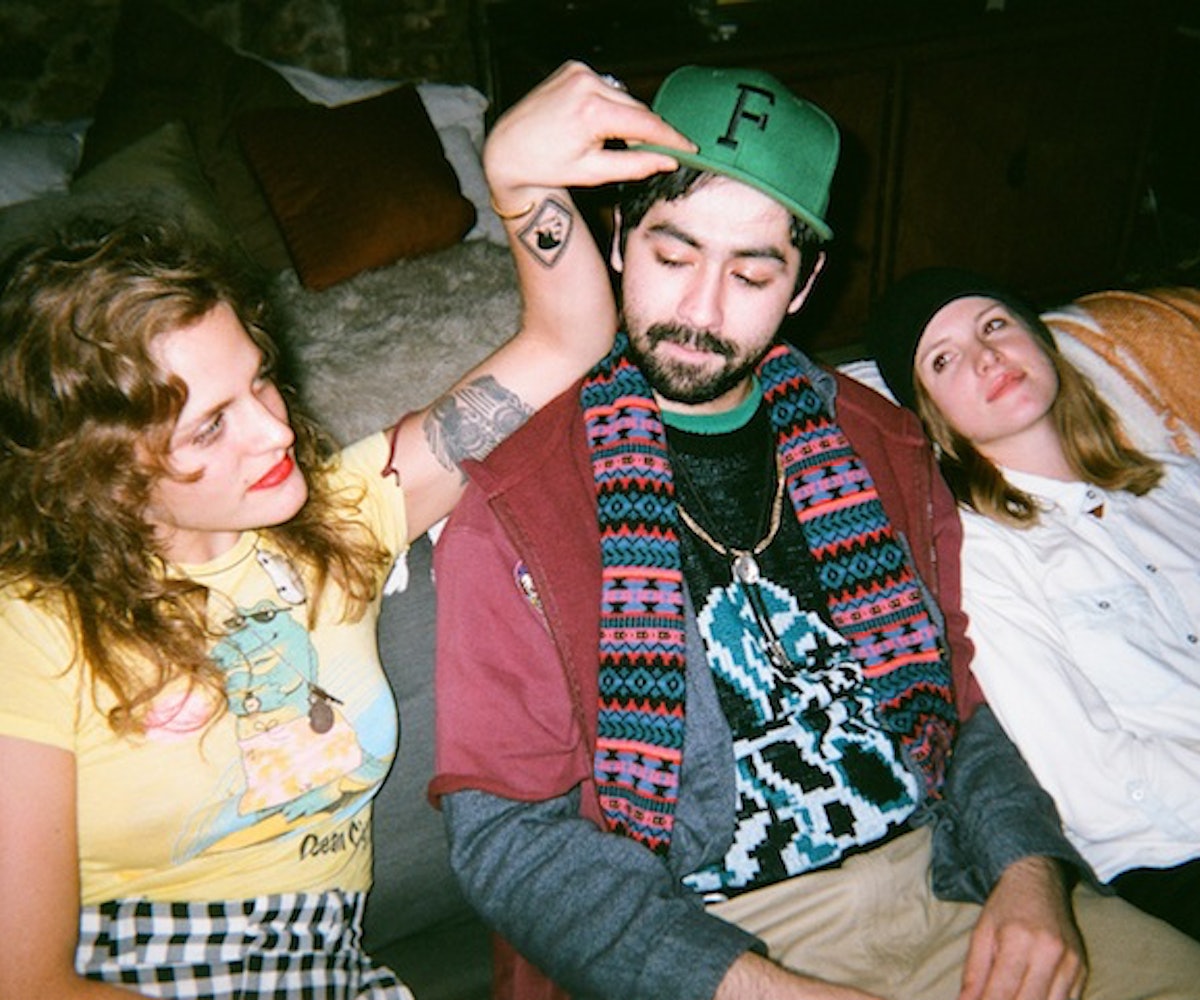 Brooklyn-born bands may be a dime a dozen nowadays, but in the case of BOYTOY—a trio of weirdos named Saara, Glenn, and Matt—my attention was caught after first listen. BOYTOY is a total musical gem: The songs off their latest self-titled EP are catchy, fun, and addictive; floating somewhere between 60’s surf jams and 90’s grunge rock. Here, we chat with the band about their EP and upcoming record (among other things). Be sure to check out more BOYTOY photos below—and don't forget to pick up one of their super limited edition cassettes on Burger Records and vinyl on PaperCup Music!

How did BOYTOY start?

Glenn Van Dyke: Well, Saara and I both had bands before—You Can Be a Wesley was Saara’s band, and Beast Make Bomb was my band. We toured down to SXSW together and did a couple of other small New England tours. Our bands both broke up around the same time, and Saara moved to New York. One night we were hanging out and my practice space was a couple blocks away, and we were like, “Let’s go play!” And it worked. And we just kept doing it. It was fun. But Matt wasn’t in the band yet.

Matthew Gregory: Well yeah, I wasn’t even around during that time period. But after that we started playing together.

Saara Untracht-Oakner: We had a different drummer, Dylan, who was playing with us, and was the drummer in my old band. And then he moved out west, and Matt and I have been friends since high school. Our old bands used to play together. Every different project we’ve had, we’ve played shows together and stuff. So when we needed a drummer, we were talking and Matt came in.

How did the name BOYTOY come about?

SUO: As my band in Boston was breaking up I was in freak-out mode, and just wanted to start any new project and keep going and writing. I came up with a list of names and BOYTOY was one that I really liked. I secured the Bandcamp. I was like, “I’m not letting this name get away. I know it’s going to be some project!” And then I hit up Glenn. Originally we had an idea to do an all-girl punk band.

So this is your first album as BOYTOY?

MG: Well, not with me. That was with the other drummer.

SUO: Yeah, but this is our first actual physical release.

MG: But nothing that we’ve all recorded together, actually.

SUO: A lot of what we’ve been playing live is stuff from this new record that we’re writing now.

GVD: That we’ve all written.

When is that coming out?

SUO: Yeah. We’re writing for that now. And recording in February, is the plan.

What inspired this self-titled EP?

SUO: I mean it was like a lot of songs that I was writing at the time, or ideas of them as I was breaking up with the band, I guess. And then some of them were from when I was living with Glenn in her basement, and us doing guitar stuff together.

GVD: It was kind of an amalgamation of both of our bands joining together. And since then—that was kind of what that album was.

SUO: Like, leftover pieces of ideas that each of us had that we were messing with at the time of that change, which was a really big change. I mean, I moved back to New York from Boston.

SUO: Still figuring each other out musically.

GVD: Before Matt joined, Saara and I wrote. And then Matt joined and now it’s like the three of us are kind of all involved in the writing process. But how it started, it was just Saara, Dylan our other drummer, and I.

SUO: Yeah. It’s cool now. The next record, too, doing a lot of songs, or writing, doing songs Matt has, and songs Glenn has, and all of us singing.

What is everyone’s favorite song off the record and why?

SUO: Oh, that’s good. I go between three. Can I do three? “Blazed,” “Shallow Town," and “TV Dreams” are my favorites. “Blazed,” I always forget how it sounds recorded. Chris McLaughlin, who made we made the recorded with, really just nailed it with that song with guitar tones and mixing. There’s a lot of little intricate things that he did while mixing that I forget are there that I don’t hear when we play live, you know? “Shallow Town” is just a fun, poppy—it feels good. And “TV Dreams,” I like the guitar stuff that goes on in that song.

GVD: Because she chose those three, I’m going to go ahead and say “Helluva Party.” I think the four songs that we still play live off that first EP are “Helluva Party,” “Shallow Town,” “Blazed,” and “TV Dreams.”

MG: Yeah, I think I like “TV Dreams.” I mean it’s fun to play live. But that’s also different too, playing them and listening to them. I just didn’t play on the recording that’s out.

How would you guys describe the EP in general?

GVD: I think there’s a taste of a lot of different things. I think it starts off really grungy and dark. People have said that it’s angsty—not angsty but someone’s asked us—

SUO: Someone asked us, “Is it about being an angsty teenager?” And I’m like, “No!”

GVD: I think that they are crafted songs. And a lot of it is—not to say that there’s not feeling in it, but compared to stuff that we’re playing now, it’s a vibe thing. These songs are more like, “This is your part. This is what it is.” And they’re fun to play. And those four are the most fun. It’s hard to describe your own music.

SUO: I think the first record had more of a nineties grungy feel.

So what are you guys writing now and does it sound different?

GVD: I think on the first record everyone brought a part to the table. Like everybody was like, “Here’s this. Oh, let me add this. Let me add this.” Whatever, like, it started from a different area, and I think this one feels more fun and cool.

How’d you guys get on Burger? Who approached who?

GVD: Saara went on tour with this band Habibi, with King Tuff.

SUO: No, no. It was the Burger Caravan of two years ago, I think. The Growlers and Cosmonauts and Gap Dream were on tour. We all got along and I was like, “Yeah, I have this band called BOYTOY,” and at that point we had been playing shows and stuff but we had just made our record.

SUO: I think it was only mixed, and I sent it to them and they were like, “Yeah. We love it. We’re down.”

GVD: And tapes with them are so awesome because it’s a really quick turnover since they make them in-house. It’s kind of perfect.

SUO: Yeah. Great dudes. So many friends are on Burger Records. It feels like a cool family.

MG: Godspeed and hopefully that probe comes back from that comet that we just landed on. That’s it.