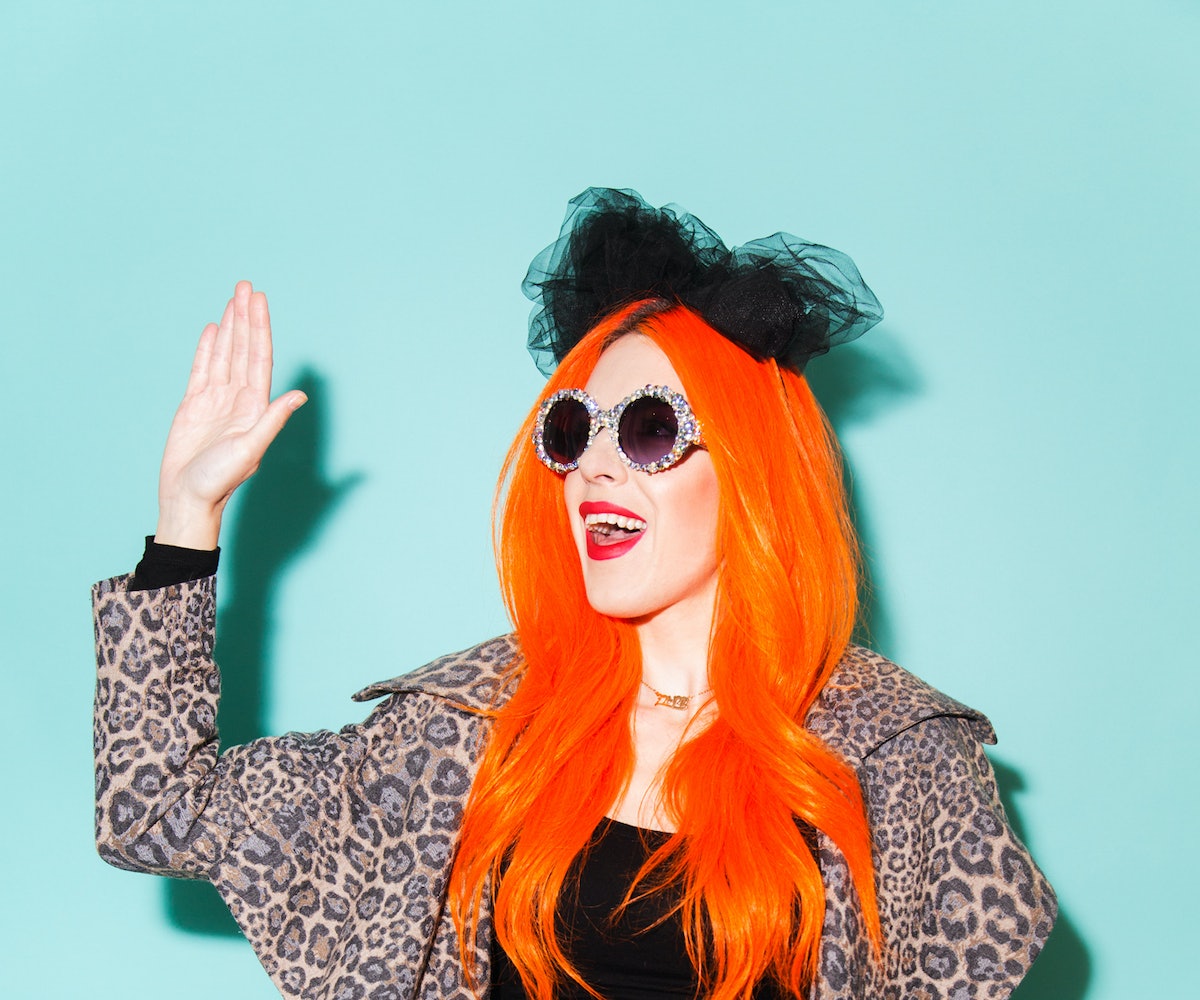 "I’m giving Carrie the other half of my Best Friend necklace. Because she’s my best friend now." I was seven years old and going through my first breakup. My BFF Erica* had decided that half of her gold-plated heart necklace would now belong to another child. And I was crushed. I cried for weeks. Life was forever changed.

Breakups are spectacular. Like snowflakes, they are all the same, yet somehow completely unique. I’ve broken up with boyfriends—some were worse than others—but every time heartbreak came around, I could take comfort in my best girlfriends. I can’t tell you how important it is to have strong, inspiring, empowered, soulful female friends. They make me better in infinite ways and I’m lucky to have as many wonderful women in my life as I do. And when you realize you have to break up with one of them, it really sucks.

I was a friend-dumpee in high school. And dumped a friend myself right after college. Those experiences were rough, but through them, I learned how to be a better friend to the kick-ass women in my life today. In hindsight, it would all boil down to paying attention to their needs—and more importantly, to my own.

Aside for a brief, cliquey moment in junior high school, I have never had a group of girlfriends. My friendships were always more one-on-one and intense. I don’t remember if I met Jackie in eighth or ninth grade, but we were the kind of BFFs who shared a locker during the day and hung out together every night. We were the theater kids who went to ska shows, participated in half a dozen after-school activities, and worked out our school schedule so we could take most of our classes together. Before I knew what "ride or die" meant, Jackie was it. But once we got into colleges in different states, her behavior started to shift. Now I realize that she was pushing me away to make the transition easier. But at the time, I wasn’t expecting the car drive where she would run down her laundry list of the reasons I was a "horrible person." To wit, she told me, "The way you dress and the way you act is going to get you raped. You're never going to be successful and you're never going to find love." It was totally not an acceptable thing to say, but Jackie was my BFF, and we had gone through (from a teenage perspective) so much together. I tried to keep the friendship alive, despite the constant negativity and ridicule. But a few months later, I finally told her I couldn’t be friends with someone who treated me so poorly.

It took me a while to extract meaning from the end of this friendship. Most important lesson: I would never, ever, ever let anyone talk to me that way, and I haven’t since. History or not, why would I stay friends with someone who doesn’t treat me like I treat them? My friends today all deserve to be on pedestals made of diamonds. If your friends don’t look at you that way, they’re not bestie material.

When you’re young, you idealize the concept of "forever"—there’s a reason those BFF necklaces are so popular. Yet like Disney movies and Hollywood rom-coms, it’s nearly always a fantasy; otherwise, we’d all still be with our high school sweethearts and living in our childhood bedrooms.

My next bestie breakup taught me a different kind of lesson. Ricky and I met at NYU, where we clicked immediately and became roommates. We both worked side jobs in music, went to the same bars and shows, and didn’t like the same boys. We were each other’s therapists, style consultants, and cheerleaders for over five years. She eventually moved to Philly, and our friendship quickly became lopsided. She would call me to cry about her latest crush or her terrible job for hours, but never seemed to have a second to talk me through my assault or recent breakup. When I told her I needed her to be more present, she flipped the subject to how hard her life was and how unreasonable I was being. She begged me to come visit her, and in a last-ditch effort to save the friendship I agreed, only to have her flake on picking me up at the bus stop when I arrived, then take me to her hookup's apartment the next morning to help him move out of his three-story walk-up. Our friendship had become so one-sided, Ricky couldn’t even take the time to hang out with me when I came to her town to visit.

Once I got home, I sent her a long email explaining why the friendship wasn’t working anymore, and that I wouldn’t be speaking to her for a while so we could work on ourselves. I wished her the best and told her I loved her, but she didn’t understand. That breakup left me feeling physically and emotionally lighter, and I have never regretted it.

Let's say you have a friendship that's gone sour: How do you end it? Like romantic breakups, there’s no formula, but you should always try to make it through with dignity and respect. Put yourself in your friend’s shoes. Would you want someone to ignore your calls and texts without explanation? You’re a woman who respects herself and respects the women around her. It’s your responsibility to take the high road and let go with love. Tell your friend you want to talk to her over dinner, express how she has been making you feel, and explain why you need to take some time apart. This isn’t to suggest that you should end every friendship that’s not going well. True relationships are a give-and-take.

In 2006, just after college, my friend Monica moved to NYC. I was in the throes of a shitty job, and going through a bad patch with my chronic illness and depression. But instead of telling her that I was having a rough time, I would just keep canceling plans last minute. It was a shitty thing to do, especially to someone in a new city. But instead of saying, “Screw Kerin!” and never speaking to me again, she called me out on it. Monica told me I was being a neglectful friend and explained how upset it was making her. It was an eye-opening moment. She showed me how reciprocal a good friendship should be. In turn, I opened up about my issues and changed my behavior. When any relationship is going smoothly, the reciprocity is invisible. But sometimes you might need a little extra care. When you do, it’s better to let your friends know than to hide away from it. Your true friends will be there for you. And if your BFF starts being distant, ask her if something is going on, and let her know you’re there for her.

In a favorite episode of The Mindy Project, the good doctor Lahiri says that “best friend is a tier, not a person”—something I’ve come to know firsthand in my late 20s and early 30s. I haven’t had a singular best friend in almost a decade (since Ricky) but have worked hard to rekindle wonderful friendships from my earlier years, make and maintain new ones, and recognize how amorphous friendships can be. Sometimes close ones naturally drift apart. What you have in common with a high school classmate is different than what you’ll share in college, your 20s, your 30s, and onward. Your feelings toward someone may stay the same, but your personal and professional obligations will most definitely change. It’s scary at first, but it’s natural. And it’s okay. The best part about true friendships is that they’re not defined by time spent, but by the quality of time you do have together.

I’m lucky to have had one constant best friend for my whole life. We were neighbors who wound up in the same kindergarten class. We hung out after school every day for 12 years, went to camp together, and might as well have shared parents. But in high school, we ran with different crowds and went to different colleges. Eventually, we wound up on different coasts as adults with very different careers and interests. The overlap of our Venn diagram is minuscule, but as easy as it would have been for a relationship like this to fizzle out or blow up, the love and respect we have for one another will never allow it. We make it a point to see one another when we’re in the same cities, and don’t hold grudges if we can’t. I know she would drop anything for me if I needed her to, and she knows I would do the same. As we evolve as women, so has our friendship; it looks nothing like it did when we were five, 15, or 25. Our friendship was there when Jackie and Ricky were… and it was still there when they weren’t. It is our special snowflake.

*Names have been changed