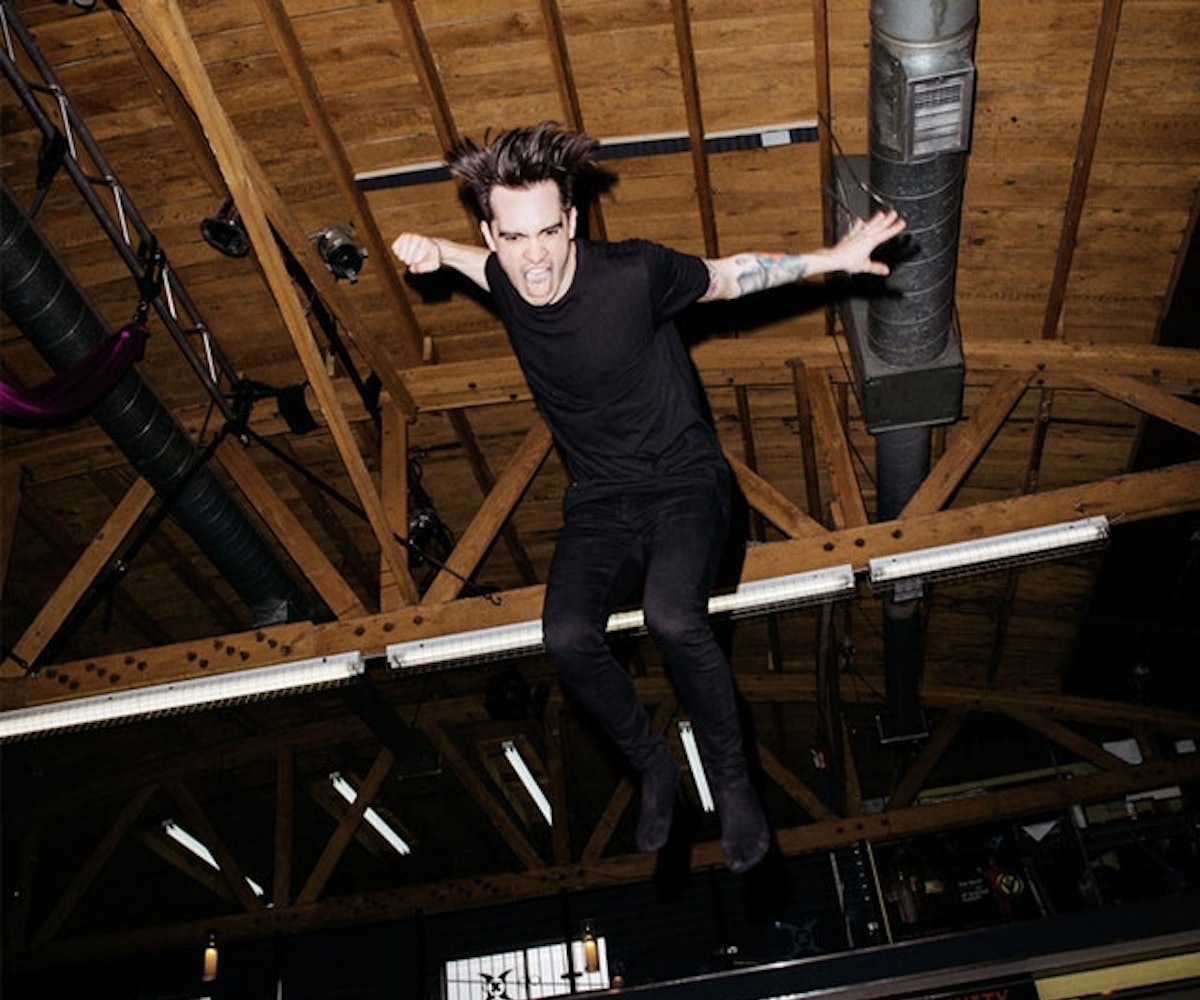 Not every interview requires a waiver. But today, Panic! at the Disco frontman Brendon Urie and I will be chatting between stunt fights, gravity-defying leaps, and trampoline flips at XTC Xtreme Training Center in Los Angeles. Within minutes of signing, he’s jumping into the air, pulling off a full gainer, and sticking a landing in a pit filled with soft blue styrofoam squares, like an action hero catapulting into a pool of ice cubes.

Urie’s lofty flight isn’t limited to trampolines, though. Panic!’s latest album, Death of a Bachelor, skyrocketed to No. 1 on the Billboard 200 chart, and the foursome is preparing for a stadium tour with Weezer. (“I get to watch Weezer for free every night,” he says with a laugh.) “It’s so crazy,” Urie says of the band scoring its first-ever chart-topping record. “Once an album is released, I’m like, ‘I hope some people like it so I can play some shows.’ That’s my goal: I want to build a production and stage show, and hope people come to the concerts, because that’s where I have the most fun outside of the studio. But something like that—it’s amazing.”

With the aid of a harness, Urie shoots up and nails a backflip with an acrobatic landing. “That was awesome,” he says, his face lighting up with a wide grin. Until now, his most perilous experiences have been limited to skateboarding and double-bouncing his friends on the backyard trampoline his family had at his childhood home in Las Vegas. But his adventurous days were abbreviated once he joined Panic! at the Disco at the age of 16. By the time he turned 17, they were playing sold-out shows on the strength of “I Write Sins Not Tragedies,” a verifiable emo anthem from 2005. “Those are the most transformative years of a person’s life—the college years. That’s when you figure out who you are, what your philosophies are. You start to build your ideals as an adult,” says Urie, now 29. “I was doing that this whole time with the other guys, and we were so young, but we had to act like we had the answers while in the public eye. I wasn’t a child star like Jason Bateman, but in our world of the emo scene, it was very strange.”

The raven-haired Urie looks like a natural, landing left hooks as the trainer gives him a few boxing tips. “My last fight?” he asks. “Oh god, high school. My friend Ryan was getting his ass beat by a bunch of dudes, and so I jumped in and started punching the backs of heads. Then we took off and got out of there in five seconds.” The early days of Panic! at the Disco were similarly chaotic. The parties were endless, and the temptations countless. And it wasn’t always easy. The upbeat songs on the new album—“Don’t Threaten Me with a Good Time” and “Victorious,” for instance—seem to recall those hedonistic days, but Urie is more grown-up now. Though he’s constantly goofing off with his wife Sarah on Vine, there’s a more traditional domesticity that seeps through to the record. It’s as if he’s finding a delicate balance between adulthood and his more rebellious impulses. “I needed to party that much to accumulate enough information to use in lyrics,” he says. “I still party sometimes, but as I’m older, now I know how I want to party, who I want to invite, what happens. I do it sometimes, and other times I just want the comfort of relaxing.”

The heightened sense of maturity on the album is due in part to Urie being the only full-time member of Panic! at the Disco. This allowed him the freedom to explore influences that give Death of a Bachelor a more theatrical vibe. There’s a spiritual connection to Queen that’s evident, and some songs even take cues from legendary Vegas crooners. “There’s the obvious connection, just from growing up in Vegas and hearing about all these icons like Sinatra and the Rat Pack,” he says. “But beyond that, Sinatra was associated with a lot of my good memories growing up. If I ever need comfort, I can always go back and get the soothing tone [from his music], and if I ever want to hear a playful song from him, I can. He was just someone I wanted to be, in terms of his musicality and the way that he composed himself in public. I think it was really important for me to learn that early on.”

As he parts, Urie’s enthusiasm is palpable. There’s a relaxed smile on his face—maybe it’s leftover adrenaline from getting launched into the air. Or perhaps it’s the satisfaction of having his feet on the ground while at the top of his game.