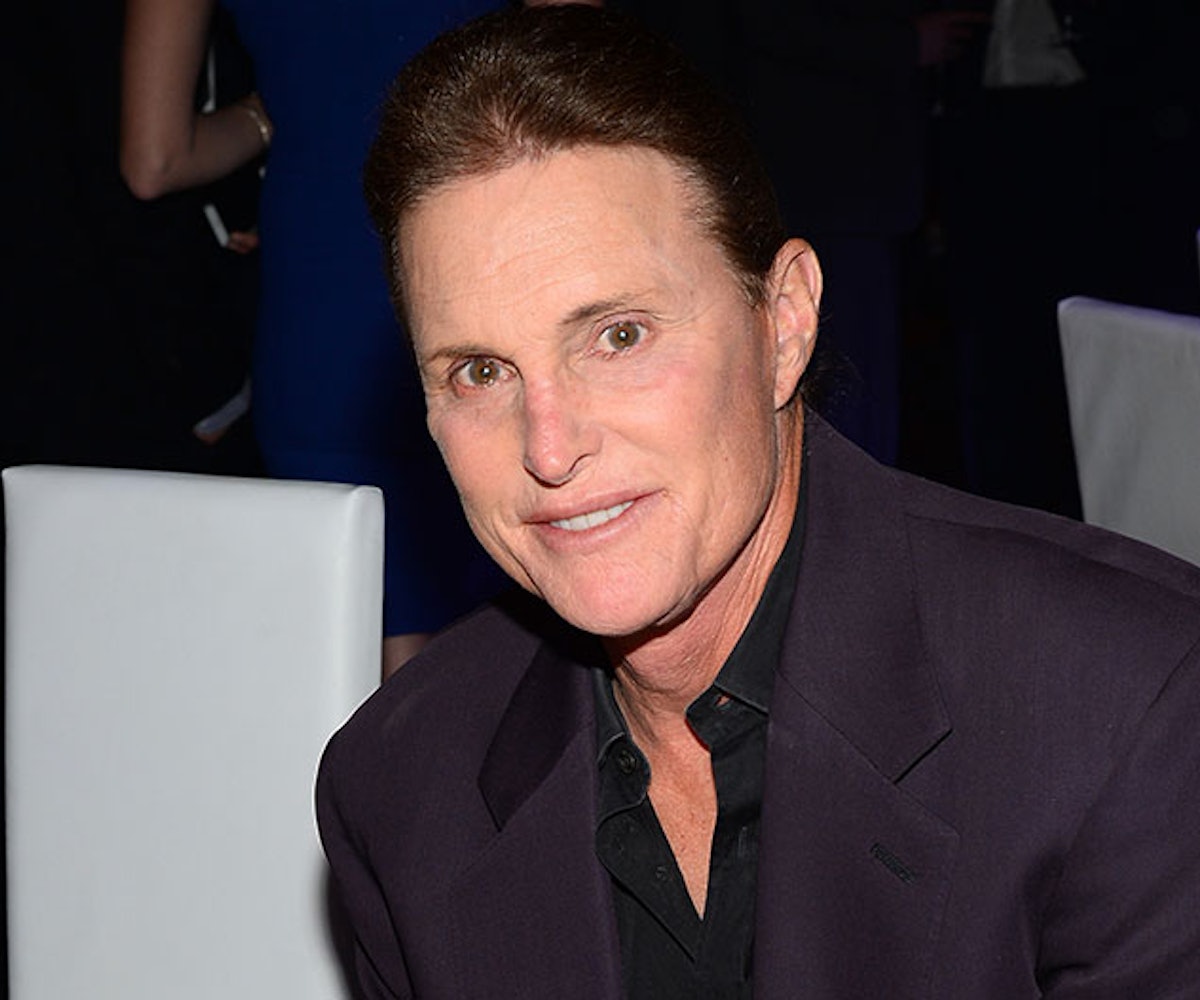 Bruce Jenner's highly anticipated interview with Diane Sawyer aired last night, marking the biggest shift in cultural perceptions of the transgender experience that I have ever witnessed. Say what you will about the Kardashians and the Jenners; America's most talked-about family just became part of a movement larger than themselves.

Bruce Jenner came out as a trans woman on national TV in a two-hour long interview that was filled with as much love and support as ABC could pack in. Bruce requested male pronouns for now, and the network clearly did its homework, too: Between tear-filled conversations with Bruce and family, Sawyer explained to viewers the difference between gender and sexuality with simple charts, helpfully demystifying the terminology. While it seemed evident that Sawyer herself supports Bruce, she asked the invasive questions that the country at large seemed to be asking, with a look of intentional confusion on her concerned face: Are you a woman? Will you tell us a name? Are you a lesbian? But in the context of the interview—which Bruce chose as a safe space to tell his story in full—the questions were doing a service to viewers who might not have any idea what they were looking at. Bruce did not have to put his life on display for America; he doesn't owe anyone an explanation. But there he was, answering her questions, explaining his story to the best of his ability.

This is what happens when you take a trans* narrative and package it for a country unfamiliar with trans* experiences. And signing up to have his experiences unpacked to help the rest of the country better understand trans lives at large was a very brave thing to do even if it meant putting up with offensive questions disguised as evocative moments like, "Do you dream as a woman?" (I bet no one has ever asked a cis-gendered woman if she dreams as a woman.) But as a TV special that was watched by millions, it was a huge moment for trans* visibility.

Of course, the segment wasn't perfect. I watched it with one eye on the hashtag #transwreck, where mostly queer people pointed out that Bruce's enormous privilege—in terms of whiteness, wealth, and celebrity—prevents this narrative from being representative of the trans* experience as a whole. And that's a really valid point. While Jenner had to worry about public opinion, there was never a question of how to afford gender reassignment surgery. Or how to pay bills and rent and also buy groceries. Or walk home alone at night.

There was also the curious erasure of what, to me, seems like Jenner's clear lesbianism. This confused Sawyer as well, but Jenner continued to state that gender and sexuality are two different things, and coming out as a woman who is attracted to women doesn't change Jenner's sexual identity as, his words, "heterosexual." Maybe we need to take things one step at a time. And I realize that it's my own sexual identity that makes me want a celebrity to acknowledge that lesbian identity is real and valid. But it seems remarkable to me that Bruce sees his attraction to woman within a heterosexual framework; even as a trans woman, he occupies a male role in that attraction. Perhaps this is indicative of his own internalized homophobia—for surely someone comfortable with a lesbian identity wouldn't insist you can identify as a woman who is solely attracted to women and still be straight. He did conclude that for now he'll be identifying as asexual, claiming that at 65 he's not looking to date but to just live his life. But for so many people, asexual identities are for life and not for the time being.

During the interview, Jenner requested that Sawyer use male pronouns. He also began to refer to himself as two different people: Bruce, and She. She is the person who we will see after the interview; Bruce is the person we are already familiar with. For me, this presented a major contradiction: I thought the most powerful moment was when Jenner took a firm stance against the narrative of "stuck in the wrong body," saying that his body is his body, and he is a person who has always had the same, female-identified soul. Dismissing the idea of a wrong body was a huge moment; so why would they then make a distinction between Bruce as Bruce and Bruce as She?

It was made clear that Bruce as She will be wearing a dress and makeup, while Bruce as Bruce remains for the most part in men's clothes. The message was that we haven't yet seen Bruce as She. But as Bruce said throughout the interview, he's always felt like a woman in his soul. So in that sense we've already seen She—because She exists regardless of how Bruce is dressed.

But the problems of the interview aside, the fact that we live in a country where something like this could be on TV is truly amazing. Bruce Jenner is a Republican, a person famous for superhero-like athleticism, a wealthy celebrity known for tabloid coverage—and a trans woman. Bruce Jenner made a name for himself because of his athleticism, a quality that our culture stamps with "male" and "masculine." "Are you a tomboy?" he recalls Kim asking him, which was one of the more poignant moments of the interview. Yes, Bruce is a woman, but that doesn't mean Bruce has to fit popular ideas of womanhood. You can be a woman and still be a competitive athlete, still occupy a traditionally male gender role (Bruce wants his kids to still call him Dad).

So, within this mainstream telling of a trans* story, I see a lot of hope: Beyond the fact that this interview will change countless lives just by having happened, it seems like a conversation about trans* lives that's more nuanced than a simplified, binary-centric "stuck in the wrong body" narrative is going to be possible. Let's not forget that as a person who occupies such extraordinary privilege, his experience comes with built-in protection—so he can never represent what it's actually like to be trans* in America today. But that doesn't mean his story isn't worth telling, listening to, and sharing. With more trans* stories comes more opportunity to dismantle what we've always been told are the binaries of gender—the right and wrong ways to live and feel. As time moves on, stories like Jenner's will allow more people to find themselves within a new framework of gender, one that might give people the agency to define themselves on their own terms.