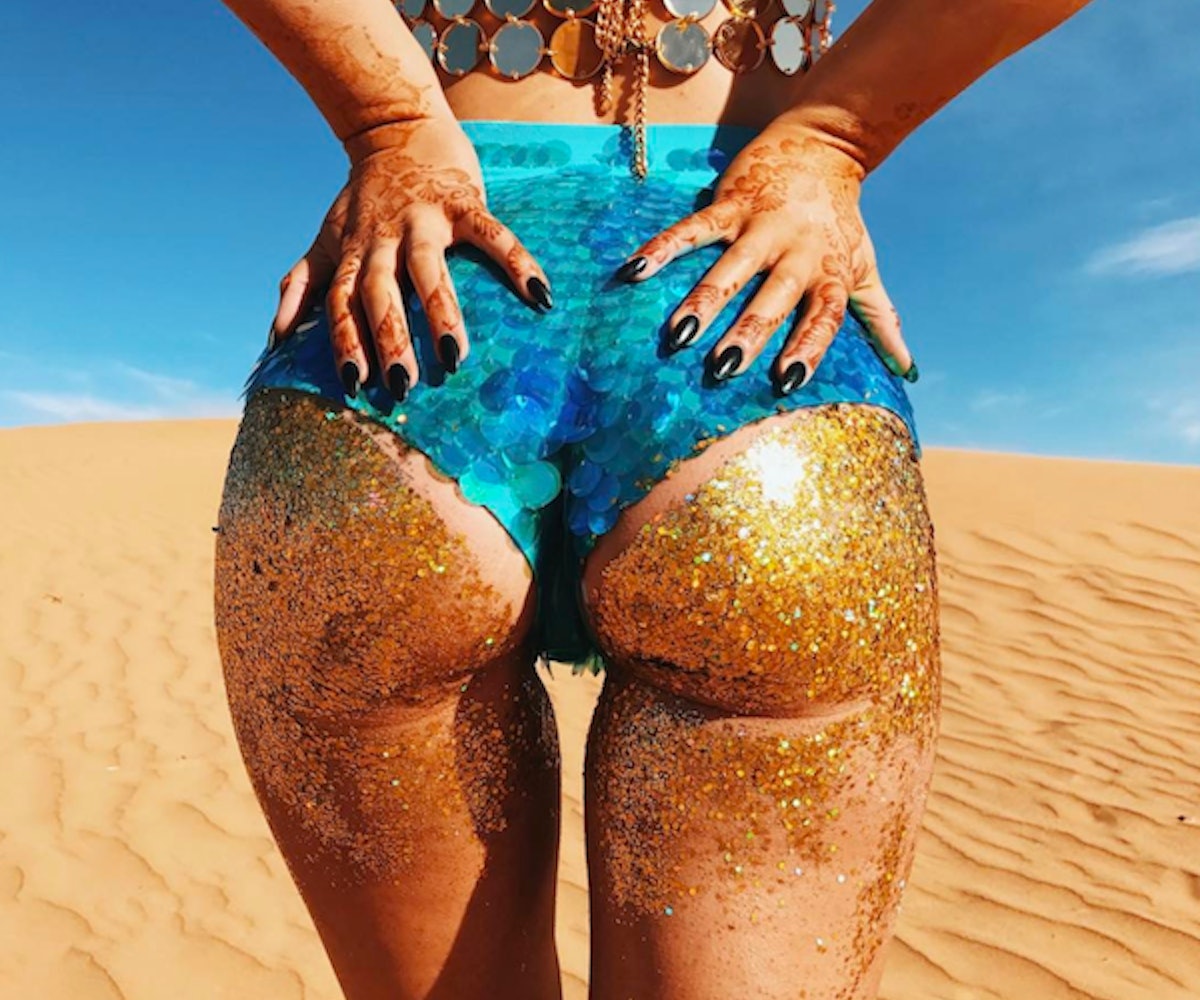 Summer music festivals have basically become Halloween for hip 20-somethings. Besides the standard flower crowns, rompers, boho beauty looks, and a selection of culturally-appropriative items, it's also the place where It-girls and party girls can wear their very best crazy shit and hope to get their picture posted on someone's fashion site. To take things to the next level, makeup artists Mia Kennington (who calls herself a "glitter creature") and Sophia Moreno then came up with an idea while at a festival themselves. Kennington says, "We were in bikinis and were getting sand all over our butts anyway, so we were like, 'Well, what if we enhance this?' So we just did loads and loads of glitter." You know how when sand sticks to your butt and is kind of the most annoying thing that ever happened to you? What if that were glitter? ZOMG, glitter butts were born and there was much rejoicing in the mermaid and unicorn makeup communities.

Joking aside, the looks are actually beautiful and extraordinarily creative. Kennington's Instagram showcases a few of the pieces (?) she's done so far, and it's really pretty incredible to see the depth of color and texture that can be achieved using glitter, gel, and fixative. But beautiful Instagram photos do not make a beautiful IRL experience and we have questions.

1. How badly does it chafe? This isn't just a concern of those of us who were not blessed with a thigh gap. That crease where your butt meets your thigh? Even Beyoncé would get a rash if glitter got in there and Beyoncé is basically the only person with a butt that deserves to be gilded. Preparation H is not cute.

2. So you can't sit down ever, right? Maybe it would be different if the glitter was very fine, but in Kennington's pictures, a lot of the glitter seems sequined-sized. And there's also jewels and stuff in there. Festivals are long and tiring but I guess you can have a nice relaxing lean on something so as to not get thousands of tiny pebbles embedded into your butt... so long as it's not another human, because a really great way to anger someone at a festival is to get tacky glitter all over them. ¯\_(ツ)_/¯

3. How long does it last before it starts cracking and sloughing off and your beautiful glitter bum looks like sparkly psoriasis?

5. This is less of a question and more of PSA. Some glitters are made of glass, so for the DIY crowd: make sure your glitter is not made of glass so we don't have to write the future headline "Coachella queen rushed to hospital after getting sliced by butt glitter."

Check out some of Kennington's looks below and please, let us know how it turns out if you are a real human person who tries this.

(via TeenVogue and Refinery29)