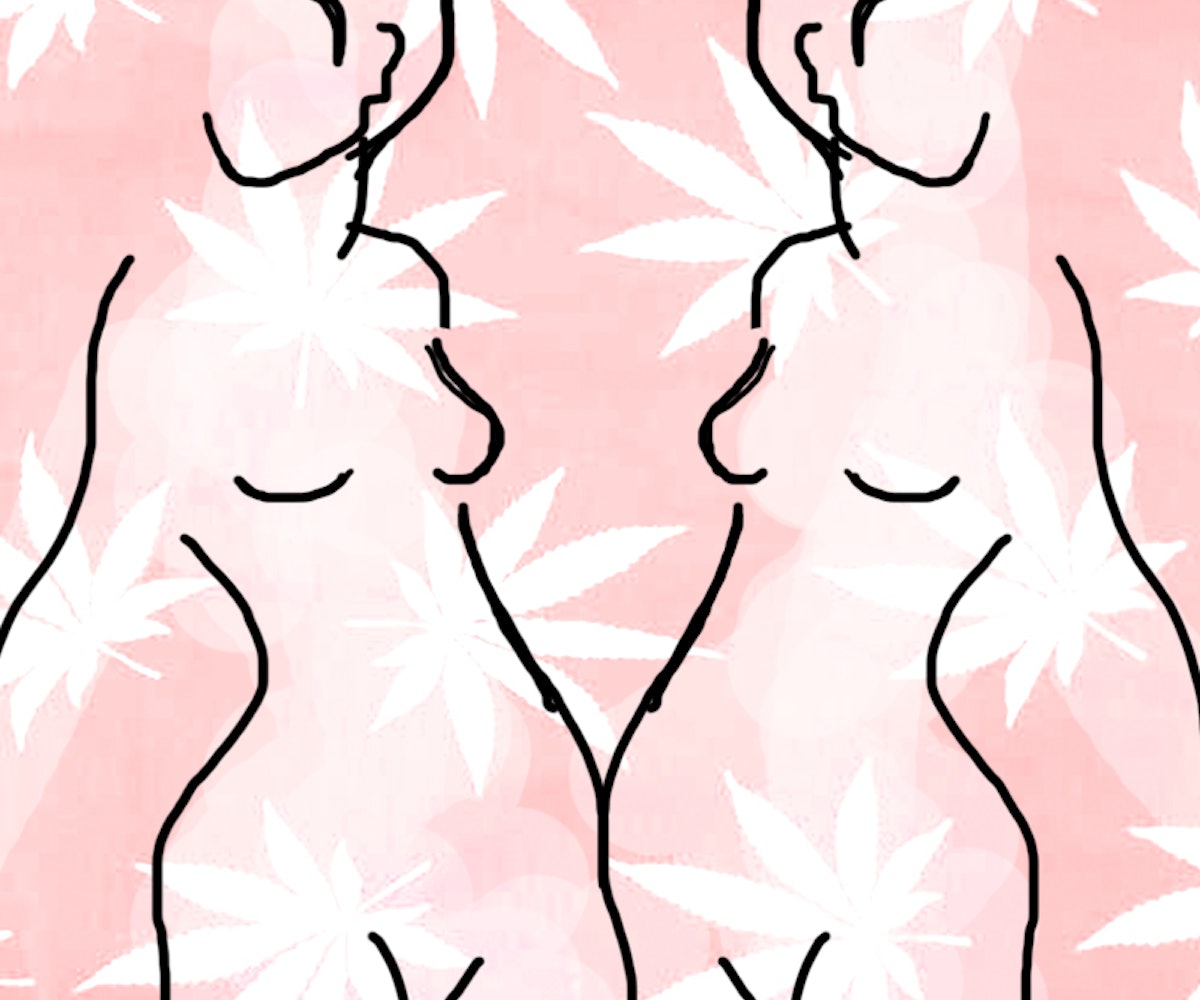 "Do you know if I'm supposed to be PMSing right now?" I texted my girlfriend, after an old video of my dog made me tear up at my desk.

"You are, and you are," she wrote back. (Sidenote: I'm not great at keeping track of my own menstrual cycle, but that's what happens when you don't have to, like, worry about getting pregnant, etc.)

My impending period could not be happening at a better time: I'd just gotten my hands on Foria Relief—THC/CBD infused vaginal suppositories—and was waiting for peak menstrual pain to try them out.

While sticking cannabis cocoa butter up my vagina on any old day sounds pretty fun, this product is specifically designed to provide allegedly life-changing pain relief. I get the sort of cramps that render me useless, or at the very least not fit to be in public; it's an unbuttoning-of-the-skinny-jeans before I get home sort of thing. In addition to popping Aleve like it's a religion, the only thing that ever truly helps is a combination of wine, weed, and a heating pad, which isn't all that convenient of a fix when I have to do things like, for example, go to work. So when I heard about the magical pot suppository, I felt something akin to hope.

According to Foria, the suppositories are formulated to harness the power of cannabis to relieve menstrual pain without getting you high. Mathew Gerson, the brand's wellness director, says, "The pelvic region contains more cannabinoid receptors than any other part of the body except for the brain." That means that when you put oil-based cannabis directly into your pelvic region via your vag, it's absorbed into the blood stream and the CBD (which alleviates pain caused by muscle cramping) can actually work locally on the spots that hurt you the most during your period.

And the THC—well, according to the scientific information from the brand, it "positively affects the nerves and assists in blocking out pain while also allowing for more pleasant signals to be received by the brain." Tl;dr, it makes you feel really good. How that's supposed to happen without actual psychoactive effects, I wasn't really sure.

And so, on a Sunday afternoon, while my period began to rev its bloody engine, I carefully unwrapped a suppository and shoved it up my vagina (you can also insert it rectally, which is supposed to help with back cramps). Upon contact with my body, it immediately began to melt, which made it a little tricky: a few inches in, it broke in half, and the melty fragments proved tricky to push all the way up there. After a few minutes of this, I decided that it was in far enough. I put my freshly boiled DivaCup in and lay on the couch with my heating pad. My cramps had begun; they were coming in waves of pain that extended from my lower abdomen to my back to my thighs, like a big invisible doughnut of torture.

It took about forty-five minutes of laying in the fetal position before I realized that my suffering had gradually subsided. I sat up, in wonderment. Instead of stabbing pain, I felt a weird sense tranquility, like my uterus had done some deep breathing exercises. Surely this is placebo, I thought to myself.

About an hour later, my girlfriend came over, and by that time, I was feeling great. I don't think I was necessarily stoned, but I was definitely extra giggly and being fully weird, which revealed itself in various moments like when I decided to tell her that the inanimate object she most reminds me of is a banana (pronounced, accidentally,

I would be remiss to review this product without mentioning the fact that it made sex really something else. To be honest, I rolled my eyes while reading the brochure that quoted reviews with phrases like "gorgeously sensuous." ("That doesn't even mean anything," I judged out loud at first.) But after some making out, my entire pelvic area began to feel like it was literally smiling, and everything felt more sensitive and intense. Instead of having one big definitive orgasm, it came in waves and lasted much longer than usual.

Sometimes when I have sex on my period, it makes my cramps worse afterward, but I continued to have the surreal sensation that all the nerve endings in my uterus, cervix, and ovaries were having a very chill tea party. It wasn't just that my cramps were gone—the entire region felt better than normal.

The sensation lasted throughout the evening. I remember that I got into bed a little after midnight, but I don't remember much past that, other than how I marveled at how soft my sheets were and how cute my dog looked. Monday morning rolled around and I woke up feeling well-rested and calm, which is a sentence I have never even thought about uttering before.

Foria gained notoriety when it released the much-hyped weed lube (formally known as Foria Pleasure) and I managed to get my hands on a tiny spray bottle of that, as well. However, since Foria Relief turns out to have four times the amount of active THC as Foria Pleasure, I found that the results paled in comparison.

As of right now, these products are only available in California, with a physician statement and recommendation letter for the use of medical marijuana—which sucks for the rest of the world. Using this was the first time I've felt like maybe my cramps don't have to ruin my week. That being said, for days I have to be my most professional and productive, I'm going to stick to Aleve—my colleagues don't need to see me feeling like my uterus reached enlightenment. That'll just be my new favorite weekend activity.