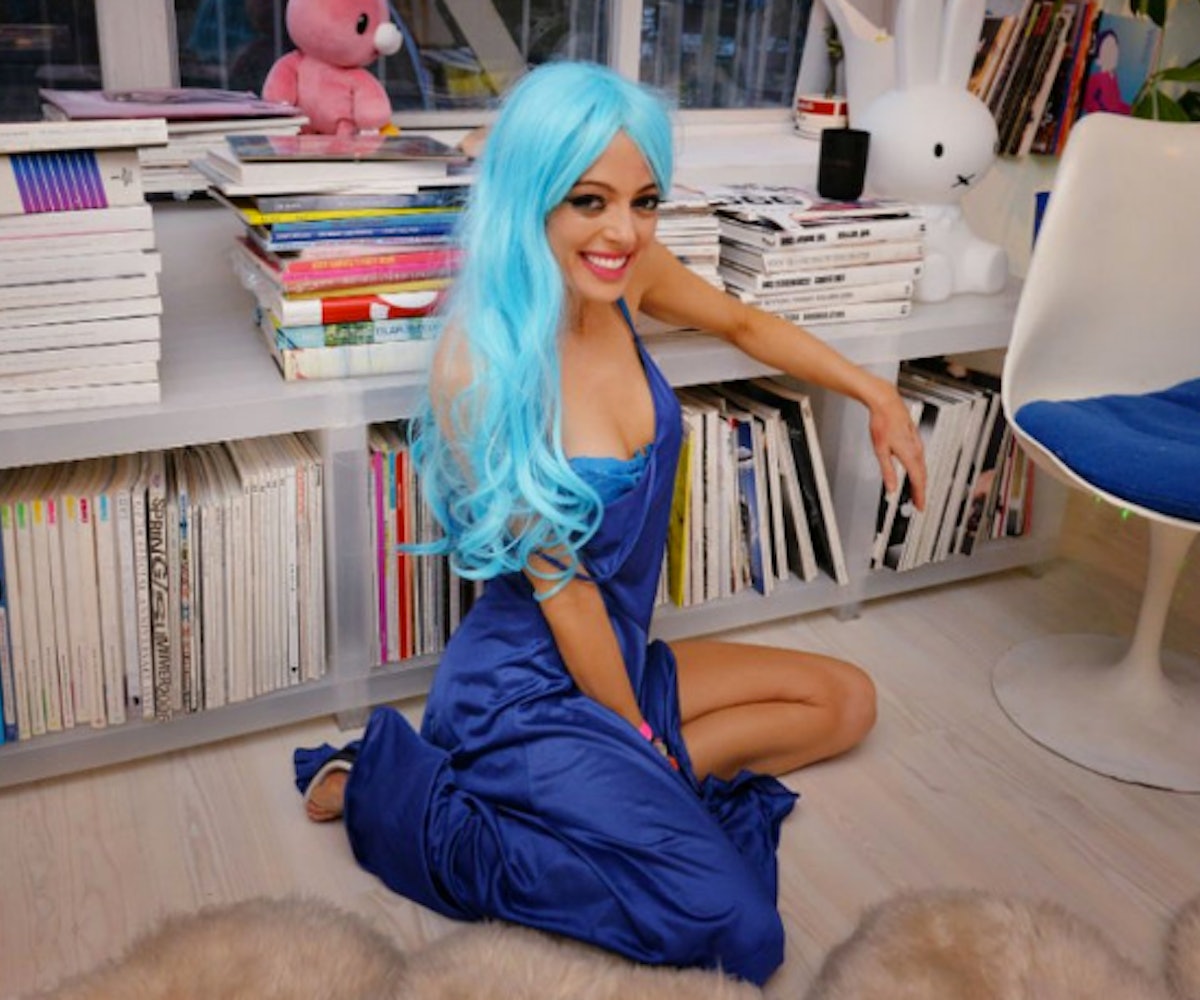 For someone so often described as unapologetic, Cat Marnell spends an awful lot of time saying she's sorry. To be sure, most of the apologies in her book, How to Murder Your Life, are for things like being forced by her editor to write a chapter about her "white girl privilege," or for being "boring," and are the sort of apologies that sound deflective or even aggressive rather than sincere; which is, you know, okay, and probably just as it should be, since the last thing Marnell should ever feel the need to say sorry for is being either privileged or boring, since one is a thing she's actually not sorry about, and the other is a thing she's actually just... not.

And yet, her compulsively readable memoir feels, in some ways, like one long, tacit apology. More so, it feels like an all caps "SORRY !!" for being in possession of what Marnell sets up as the diametrically opposite driving forces in her life, two qualities that are endlessly compelling (if often endlessly destructive): ambition and addiction, the warring Thanatos and Eros inside the mind of one Cat Marnell, that just so happen to be stand-ins for another dichotomy of Marnell's life, privilege and despair.

But first: Thanatos and Eros—these were Freud's terms for the life and death instincts which are said to drive us all; Marnell—no stranger to Freudian theory not only as the daughter of a psychiatrist but also as a visitor to countless (prescribing) psychiatrists—made great use of this motivating binary in her brilliant and widely acclaimed blog post on the death of Whitney Houston for xoJane, and it serves as the subtext throughout her memoir, which tracks Marnell's life from her time as an isolated and fashion magazine-worshipping young girl in a wealthy D.C. suburb through to her time as an isolated and pill-worshipping boarding school student in Massachusetts and on to her time as an... isolated and every-drug-imaginable-worshipping beauty writer in New York City.

No matter where Marnell is in her life, though, the twin engines of addiction and ambition are what she sees as propelling her forward, only rather than working together, they serve as combatants, each struggling to come out on top over the other. This battle is apparent throughout the narrative, but perhaps it exists most poignantly in the introductory chapter, in which Marnell attends a Cirque du Soleil event as a guest of a luxury beauty brand and basically completely fucks it up by making a huge, hiccuping scene while high and drunk, thereby, potentially, ruining the career she's coveted since childhood.

It's a cringeworthy scene for anyone who's ever flirted with either ambition or addiction; it's instantly recognizable as a rock bottom type of moment, one which might not lead to any second chances. But readers who know anything about her know that, after the Cirque du Soleil debacle, Marnell would have several more chances to get her professional life in order, and that her addiction not only would not get in the way of her ambition but would actually sometimes facilitate it, allowing her the ability not only to do things like manically organize her boss' office but also to even develop the persona which would ultimately attract hundreds of thousands of readers to her work. This is not to say that Marnell wouldn't be who she is without her addiction, merely that, at this point, it is impossible to fully extricate her addictive propensities from her desire to succeed in a field which values, if not drug addiction itself, many of the most notable by-products of it, including a relentless need to control their environment and themselves.

However, that Marnell doesn't see—or at least doesn't acknowledge—that ambition and addiction are not always contradictory, and rather that, frequently, they serve as fuel rather than as a means of putting out the other's flame, is interesting, if a little disappointing. It would take a pretty obtuse reading of Marnell's book not to connect the dots between how the two things work in tandem. It especially feels extra strange that Marnell, who is nothing if not perceptive and frank about her own motivations, would fail to acknowledge that she probably would never have risen so high in her industry if she hadn't often been so, well, high. But perhaps this lack of in-depth analysis of the ambition-addiction dynamic was the work of an overzealous editor who, in order to feel comfortable with promoting a memoir which doesn't have the "happy" ending of a protagonist finding peace in sobriety, felt that there needed to be a clear message to the book, and that message would be that drugs are bad because they force you to leave your cushy job at Conde Nast with a goddess editor boss (in the form of Marnell's adored Jean Godfrey-June) and take a job at an internet-only publication with a very clay-footed boss, only to, ultimately, leave without a job at all, with only the professed last chapter hope of maybe visiting the xoJane offices in their new digs at Time Inc. on the horizon. (This will not be happening.)

Or perhaps this refusal to own up to the incredible, if often devastating, strength of her twin ambition-addiction drive is the work of Marnell herself, who would risk one major thing by refusing to apologize tacitly at least for the fact that she benefitted for so many years from her ambition-addiction: being liked. Ambition and addiction are two things that women will always need to apologize for if they want any chance of being liked by those around them, and if there's one thing that comes across clearly in this book, and in all the press Marnell has done since its release, it's how lonely she is, and how much she craves acceptance and a certain type of popularity. But Marnell isn't looking for accolades from the masses of xoJane commenters who flooded her stories with messages alternating between sycophantic pleas for her attention or strong condemnations about how irresponsible she was for publishing much of her work; Marnell is too self-aware and has aspirations that reach far higher than a well-populated comments section. Rather, Marnell wants to be liked not by those beneath her or even by most of her peers, but by the women who are her idols, those who could mentor her, those whose approval actually counts for something.

In a 2013 essay on The Hairpin, Sarah Nicole Prickett wrote about how Lindsay Lohan (whose life parallels Marnell's in such a way that Lohan even makes an appearance in How to Murder Your Life) uses the "pretty girl trick" of apologizing—publicly and often—not only in an effort to get out of facing consequences for damaging actions, but also in order to be liked: "'Sorry,' Prickett writes, "is always saying 'please still like me.'" This is a pretty girl trick that Marnell would no doubt recognize, not least because she pulled it off for an entire book, just in a far more compelling way than do most pretty girls who fuck up.

Marnell and Lohan share a host of similar qualities: They are privileged in their wealth, beauty, talent, whiteness, precocity; Marnell herself equated the two in one of her Amphetamine Logic columns on VICE. But what both women also share, thanks to their privilege, is an ability to escape any sort of accountability for their "bad" behavior (at least, for a while, anyway), for showing up late—or not at all—to work, for treating their bodies and their friends and their families badly. But in the years since Lohan's apology tour, the actress has fallen firmly out of favor with Hollywood and with the public at large. Her ambitions now, which seem to include working with the Turkish government to solve the country's Syrian refugee crisis, seem like a repentance of sorts, one which might not include crying to Oprah again, but which definitely contain a plea to be taken seriously and, yes, liked again.

Marnell was never as big a star as Lohan; she didn't have as far to fall, she doesn't have as much to apologize for, and she doesn't need as many people to like her. And yet, her memoir often feels like one big act of contrition, an apology for living a life driven by ambition and addiction, even if the people whose forgiveness she really wants would probably have never been interested in her, to begin with, if those two qualities hadn't been present in Marnell at all. But fine: Marnell is easy enough to forgive. Her former beloved boss, Godfrey-June, clearly does. But, what comes after forgiveness?

There's an ending we want from addiction memoirs, recovery or death, but Marnell's provides neither. Instead, it ends on the kind of hopeful, if naive note that is instantly familiar to anyone who is used to being begged for forgiveness by someone who just can't stop themselves from doing hurtful things. It ends with Marnell painting her life in as positive as possible colors—even her relationships with her abusive, controlling father and absent, ice cold mother are remarkably repaired, and, guess what, it turns out they're actually the greatest—and an acknowledgment that, sure, she still uses drugs, but not like she used to, and so, yeah, everything's gonna be just fine! It's pretty to think that this is the case, but believing in it too fully would also mean ignoring the fact that Marnell did her whole post-publication press tour while wearing wigs having to explain how she had so thoroughly damaged her scalp that she might never be able to grow hair on her head again. (How? Apparently, it had something to do with a meat thermometer.)

But so: Believing in Marnell's version of the truth has never been the key to enjoying her work, to say nothing of liking her, just like admiring Lohan's acting skills had nothing to do with believing her when she said she didn't use cocaine. I don't know what Marnell will be doing next; her unwavering adulation of print magazines feels anachronistic (especially since even JGJ works online now, for Gwyneth Paltrow's newsletter GOOP) and irrelevant since Marnell would have a hard time finding a steady job at a print publication anyway. And while it would be amazing for fans of her writing (of which I am one) to see her contributing regularly online again, Marnell herself remains skeptical about her ability to be able to work with any consistency. So perhaps what comes next for Marnell is another book, one which will almost definitely be non-fiction. I'd look forward to it; How to Murder Your Life, besides smartly snatching up what would have been the perfect headline for Lohan's eventual memoir, was a fun ride of a book, unsatisfying only in its inability to truly be as unapologetic as so many claim it is. And yet I'm still excited to see what Marnell does next; now that she knows everyone likes her, maybe she can stop saying sorry, and start to get to the deeper truth that lies beneath the reflective surface of all those apologies.