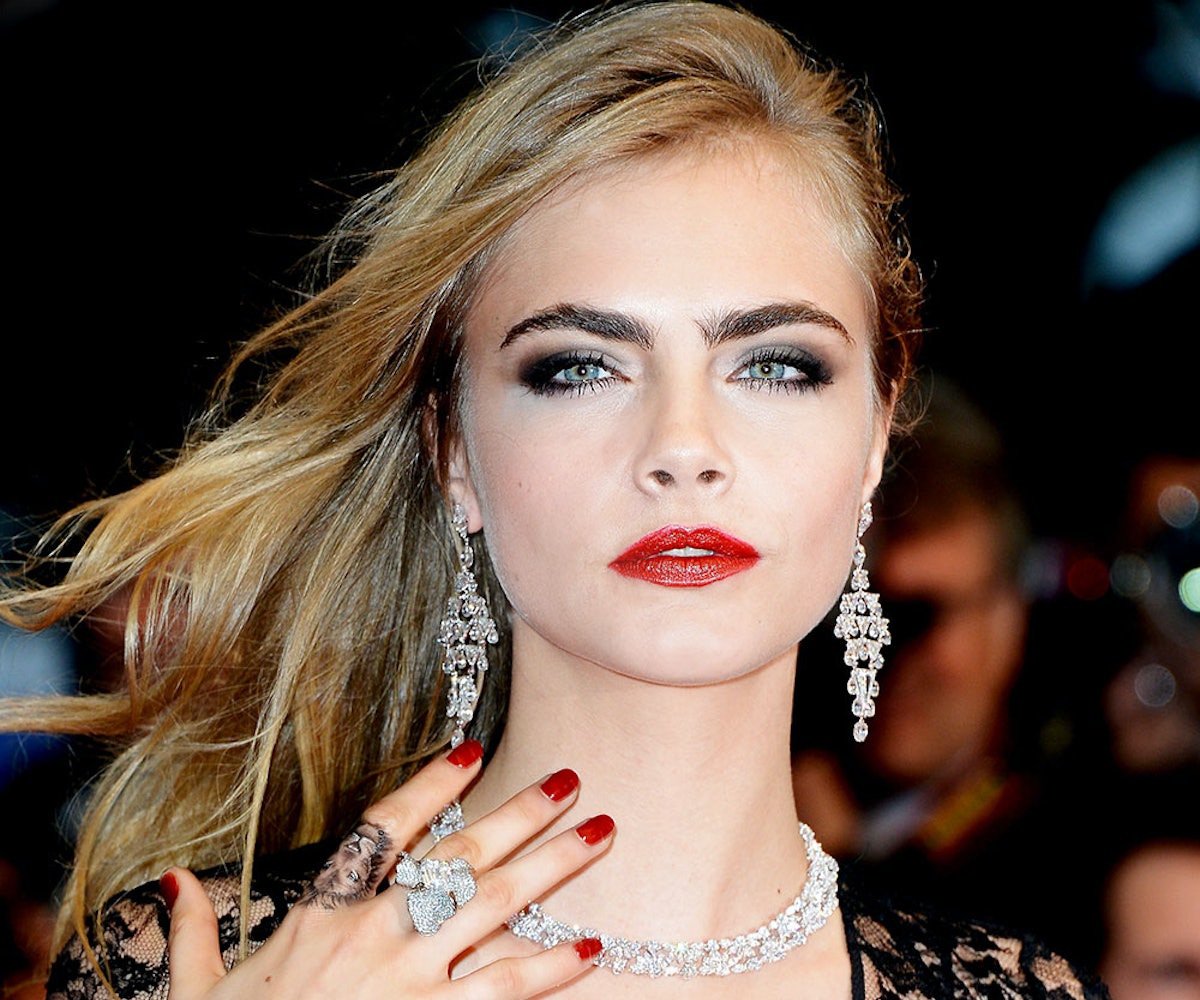 Once upon a time, tattoos were considered to be a hindrance to one's career. But we survived Y2K and MySpace, so why should we, nevermind celebrities, abide by outdated ideals? That's right: Let's permanently wear our most meaningful thoughts, dreams, and drunken inclinations on our skin. And while we're at it, let's poke holes through our skin and run around in next to nothing. It's 2015, baby. It's a celebrity's world and we're just living in it, so click through the gallery to see famous people with cool finger tattoos. Just because.

Also, worth noting: This is one of the trickiest tattoos to have, since finger tats often get blown out, so if you feel inspired, make sure to consult with your artist before taking the plunge.

The 19 Most Naked Red Carpet Dresses Of All-Time

14 Celebrities Speak About Their Experiences With Abortion

For her first tattoo, Delevingne got a lion inked on her finger. Roar, or something like that.

Now she literally has that je ne sais quoi.

When you're really dedicated to a role, you commit fully. Clarke got this bumblebee tattoo to match her character in her upcoming film, Me Before You.

When she was a child, Welch collected birdcages. She got this knuckle tattoo in Austin, Texas. "I got it done at 2 am by some massive guy with flame tattoos on his skull called Animal," she told GQ. "It was a proper tattoo experience, but it hurt so much."

Matching cousin tattoos? Cue the awws, as well as the sobs from the bevy of other Baldwins who weren't invited on this tattoo trip.

Never one for subtlty, Grimes has a throng of squiggly lines all over her fingers.

Her hands serve as a testament to her love of DIY tattoos.

They say that if you want something done right, you should do it yourself. And if that means putting a ring on your finger, well, you do what you have to do. Take that.

In order of her Super Bowl halftime performance, Perry got the roman numerals "XLIX" tattooed on her finger. Left shark was a bit disappointed, but he got over it.

Osbourne got this heart tattoo in 2002 with her boyfriend of the time, Bert McCracken. He broke up with her on Valentine's Day the following year. But, hey, if you decide to get a matching tattoo with your boyfriend of a few months, make sure it's a cute, general one.

If Del Rey's tattoos—"trust no one," "paradise," and "die young"—don't sum her up, well, buy an album or something. We don't know what else to tell you.

You can actually create a story with all of her finger tattoos. Seriously: An alien with a big heart went to get some sliced watermelon, but he was being watched by a set of all-seeing eyes. They didn't know he came in peace and just wanted equality. But he kept his cool, held onto his cross, and remembered that he was not bad. So he stuck his tongue out, muttered the word "karma," and went on his merry way.

She has the word "trainwreck" on the inside of her left middle finger, the phrase "ROCK CITY" emblazed across her knuckles, a cross, cat symbol, an outline of a circle around a black dot, and a bunch of "Russian prison tatoo symbols" to remind her of all the "crazy crap [she] did when [she] was younger."

Ora has a heart outline on her pinky, and the words "hope," "love," and "promise" on the inside of her fingers.

We could list the dozens of tattoos Kravitz has on her hands alone, but we'd rather go listen to LOLAWOLF instead.