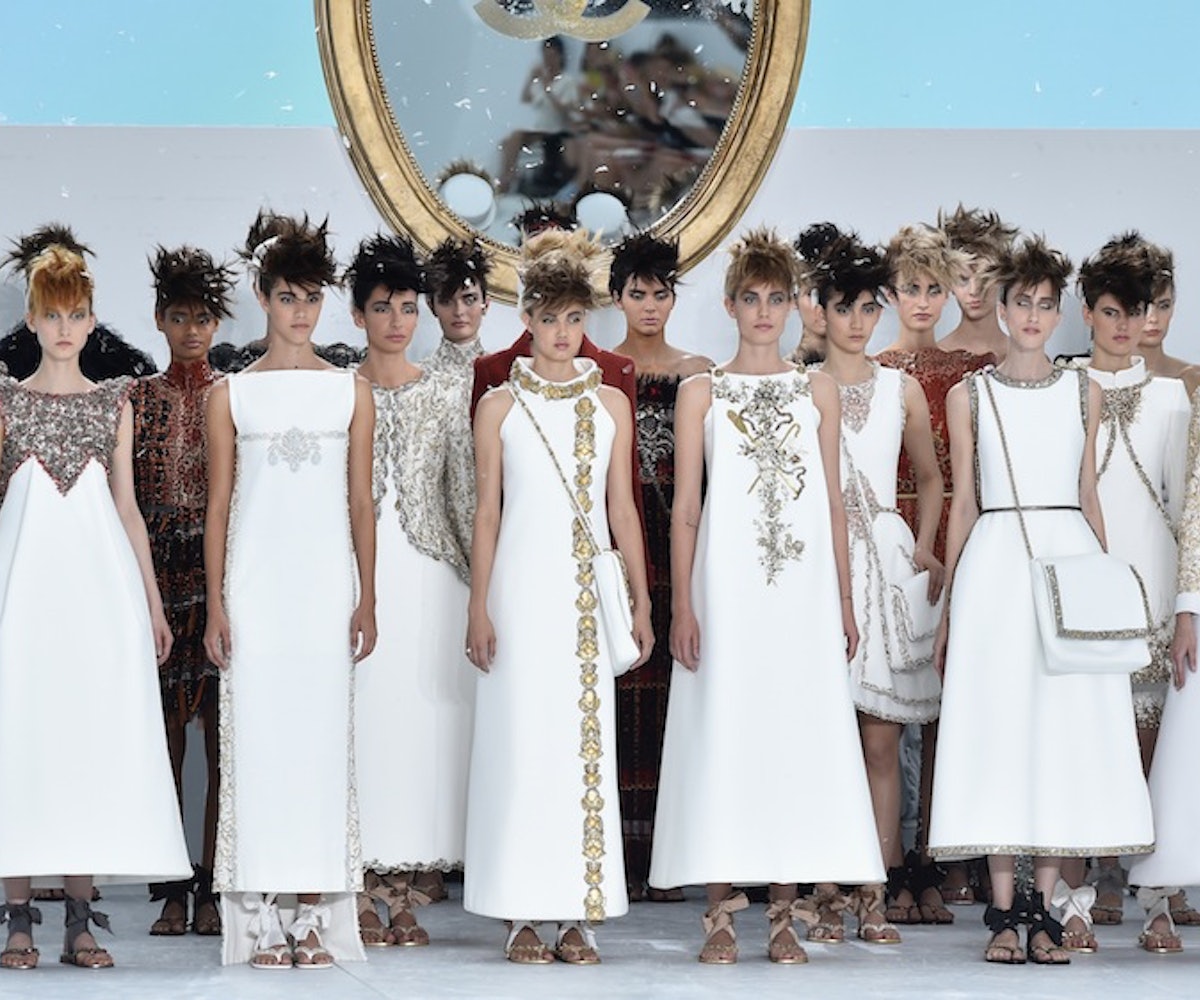 It's not an exaggeration to say that Chanel runway shows take the audience--yes, even those of us watching from our computer screens--to a fashion planet we never really thought possible. Whether it's making a suburban grocery store suddenly chic (glitter sneakers will do that, we guess), redesigning a denim tube dress, or transforming a hula hoop purse the It item of the season, Karl Lagerfeld instantly morphs a so-weird-it's-sorta-cool item into something just plain cool.

For The Kaiser's 2014-2015 Haute Couture collection, this means wild '80s hair, Baroque details, and a surprisingly pared-down set (there were no post-show supermarket raids this time, that's for sure). And between special appearances by everyone from Jared Leto to Kendall Jenner--not to mention, a conspicuously absent Cara D.-- there was plenty  to talk about.

So get briefed on the top ten Chanel moments in the gallery...then let us know if you'll really be wearing flip flops with ribbons next season.

1. We can usually count on Cara Delevingne to close the show with Karl Lagerfeld, but this time the Kaiser chose pregnant model Ashleigh Good to do the honors instead.

2. Karl Lagerfeld drew influence from the pioneering architect Le Corbusier. According to the designer, "This is the story of Le Corbusier going to Versailles."

3. Who needs high heels (or even last season's bedazzled sneakers) when you can have flip flops with ribbons?

4. That time Kristen Stewart stole the show with her textured short 'do.

6. The crazy hair? It was reportedly inspired by '80s boy bands. Seriously.

7. The mirror at the end of the catwalk was inspired by an apartment. Reportedly, "Lagerfeld's inspiration had been a '30s apartment by original modernist architect, Le Corbousier, in which he’d seen a gilded oval mirror set into a concrete wall."

8. Couldn't make it to the show itself? It's cool...at least you can stream the entire soundtrack online.

9. Between the ornate embellishments and metallic touches, the key was all in the details. And judging from the beauty look, the same held true for makeup.

10. The only person with locks luscious enough to rival those of K.Stew? Jared Leto, duh (also dressed in gold glitter pants, no less...).