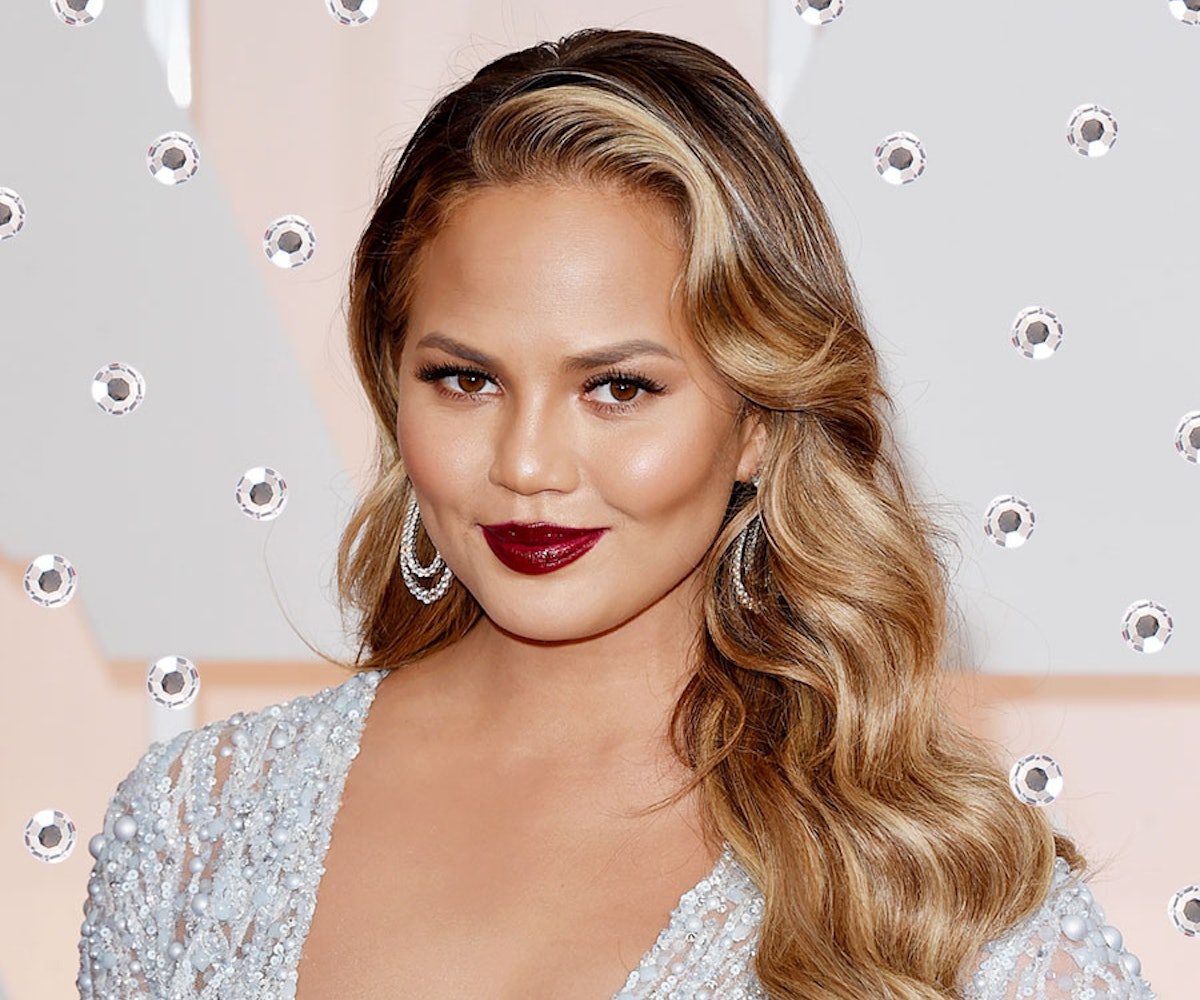 The Internet is filled with many great and wonderful things, but it's also become a place where bullies have run free with the concept of free speech. If anyone understands this, it's Chrissy Teigen. Over the past few years, the former model has been publicly attacked and criticized on Twitter, Instagram, and nearly every other social-media platform about everything from her personal appearance to the fact that she licks seasoning off Doritos. But, like many other celebrities, Teigen isn't standing for it anymore, and is helping to usher in a new era where women fight back against negative trolls.

"Once in a while, I’m just blown away by how people can be so directly mean to you," Teigen says, sitting crosslegged at Miami's Mondrian hotel. "I think people don’t realize how much celebrities read. But then great things come out of reading all your comments, because you're able to be in touch with your fans and talk to them in ways that you would have never been able to before. It’s 99 percent good...as long as you can deal with all of the idiots."

While she's quick to call out her haters ("Do you just assume that I have no feelings or do you not care, or are you just a bitch? Be better.") and engage with her supporters, she admits that she's taken a step back from social media. "The cycle is so exhausting," she says. "I still Tweet, but you’re not going to see me fuck with John or anything too serious, because it’s exhausting and I’m unprepared for it…it bums me out too much."

Instead, she immerses herself in projects she's passionate about—her partnership with Captain Morgan, her upcoming cookbook, her food blog, and her various TV shows: Lip Sync Battle and The FAB Life. She also hosts a mean dinner party, which you'd know if you were one of her 3.1 million Instagram followers.

And although she has had to pull herself back from writing "the dumbest shit" on social media, she's refreshingly open to speaking her mind. She's also not afraid to tell you when your Twitter handle is ridiculous: "You know you can change it, right?" she asks me when I tell her mine.

Click through the gallery to see our interview with Teigen. Then show her some @ love—she's hilarious and deserves it.

How have you tuned out negativity from social media?It’s funny sometimes. I’m friends with some people at Twitter, and sometimes they’ll send me direct messages saying, "We can see you’ve been getting a lot of crap lately and that you’re getting overwhelmed. Is there anything we can do?" So, Twitter is really great at wanting to regulate that kind of stuff, but you just can’t get rid of it all, so you kind of just have to come to terms and become able to deal with it. I don’t care when it’s a very broad statement like "I think you’re ugly"—I’m fine with that.

This morning I got a very long, brutal video this woman sent me about how I’ve gained weight and that she’s very disappointed in me. It was very hurtful. We’re women, we know when we’ve gained weight, and we don’t need it pointed out to us all the time.

What’s your approach to social media? Do you go in with the thought I'm just going to say what’s on my mind?Well, it’s different now. Now, if I say something and people don’t agree with it, they’ll try to get you fired: They will write you employer, and they will full-on try to ruin your life; they will post your address, your family's address... I’m definitely affected because I can’t have as fun of a time, or as light of a time as I used to have when I first logged on six years ago. I used to be able to say the dumbest shit and no one cared. Now, one Tweet will turn into a headline, and then people who don’t follow you and don’t know who you are will comment without knowing you're being sarcastic, and you'll be attacked by all of these random people. The cycle is so exhausting. I still Tweet, but you’re not going to see me fuck with John or anything too serious, because it’s exhausting and I’m unprepared for it… it bums me out too much.

You did have some good Tweets about the first GOP debate, though.That was fun, though, because everyone was watching that. Honestly, I was kind of blown away. The ratings were through the roof, and I mean just the lineup of people, entertainment wise—which is what that first debate is until we get to the point where we’re conspiring against each other—I think it’s hysterical to watch. I saw Chris Christie and I forgot he was on it.

It was kind of like a Real Housewife reunion.I didn’t even know that Megan hated Donald. I didn’t know Donald hated Fox. I’m so confused about who I hate and like now. It’s funny, though. I was watching it with John and he was like, “Are you going to go back to work now?” and I was like, "No, I must finish watching this." He was bummed out because he was in the studio so he couldn’t watch it.

How do you make sure your sarcastic and dry sense of humor come across on social media? I think it has a lot to do with punctuation, but also, it's about picking the right fans and followers that you want. I don’t want people who don’t get sarcasm. Like, I Tweeted, "Finally a fucking American flag pin now I know who to vote for," and I got thousands of Tweets that were like, That’s how you pick a president? I just wanted to shoot myself. You just have to pick your fan base, and then you learn to love them and they’re your fucking babies once they get the joke—but if they miss it, it’s the worse thing ever. I try to make it painfully obviously that I’m being sarcastic. But that’s not the point of sarcasm—if you have to make a font for it, then, gosh, I don’t want to live in that kind of world.

You and John host a lot of dinner parties. What's your favorite drink to serve to a big group?I love anything I can do in a pitcher, obviously, because I don’t want to be shaking cocktails for everyone all day. We have the Baewatch which is really fruity; it sneaks up on you, which I love. And then the Freaky Teigy is still really refreshing—it’s coconut water, soda water, lime, and pineapple rum. It’s nice for a place where it’s so humid, so hot, and I feel like it’s healthy because of the coconut water.

How do you host a really good dinner party?What I miss about New York is that I feel like the world is your oyster there. My friend Chef Roblé used to come over, and I’d invite all of my girlfriends and he’d teach us how to make sushi, or roll pasta. I like those kinds of nights. I think people see them like Real Housewives and shows where they bring in a chef and learn from them, and it seems really fancy, but there are a lot of different websites where they have different people come in a teach you—you just have to pay for the ingredients. I also love the app Kitchen Surfing—it’s like a weird Uber chef.

I love a girls' night and we love having game days at the apartment. We love having people over, but we try to make it casual. Cocktail-wise, we're not bartender people—we keep an open bar, and everything is family style and all do it yourself. People sit on the floor...

What are the best games for everyone to play?John loves playing games, more than I do. I love it for 10 minutes, but then I’m up getting a drink or going to cook something. We love Catch Phrase, but John takes way too long to describe things…Heads Up! is our favorite, though—we’re addicted to it. It’s the best when you play with drunk people and watch the video at the end.

Do you guys do a lot of lip-sync videos battles at home?No—I can’t lip sync. Actually, the show has asked me a few times and I’m just terrified. I thought I was doing it when it was a commercial break, but now I learned it’s going to be aired on the last episode and I’m terrified. There are too many things to think about; it’s lip syncing, but there are also dancers and then you have to dance...you really have to enunciate. There’s an art to it and I can’t do it. John doesn’t lip sync, so he isn’t really good at it, either.

It’s horrible when you see your favorite musician and they’re obviously lip syncing.I’ve seen a few during award shows. Sometimes, when John's performing, I go to rehersal and I'll see people lip syncing and I think, "They’re just saving their voice." And then they come out and they’re still lip syncing. Oh my gosh, it breaks your heart. But then they’re dancing so hard so it distracts you. It becomes less about the singing and more about the entertainment value, which I get. I’ll still buy the song.

Do you now get paranoid that a camera is going to record you when you're watching these things?Everything is caught all the time. Doing more and more TV now, I’m always weirded out because I always think I’m mic'd—you think you’re alone and you’re talking to your friend and saying, “Fuck all of those...” and then you’re like, "Fuck I have still a mic on." So I’m learning now, slowly but surely.

Who have your favorite performers on Lip Sync Battle? Justin Bieber really surprised me. I will say...I became a Belieber. I now get it—this guy is really charming. I think they gave him a heads up that I was really nervous to meet him, and so he went out of his way to make me comfortable and I felt like a little kid. The Rock, though, was one of the kindest, coolest humans on this planet. He was the first episode we taped, so we all went into it really nervous and the fact that he was the first one on there, we knew the season was going to be awesome and epic.

Were you a fan of LL Cool J growing up?Of course! When I was growing up, I'd play “Doing It” and when my mom was in the car, I had to turn it down during that one orgasmic part. He’s still exactly the same. He’s just still as captivating. When he enters a room, everyone’s like, "Oh, hello." Holy cow, he’s great. Team-wise, it’s such a fluid, beautiful bunch of people that are so collaborative and so willing to listen to your ideas, and your concerns...they’re so great on that show. Truly, I loved going to work every day, and we start filiming again soon.