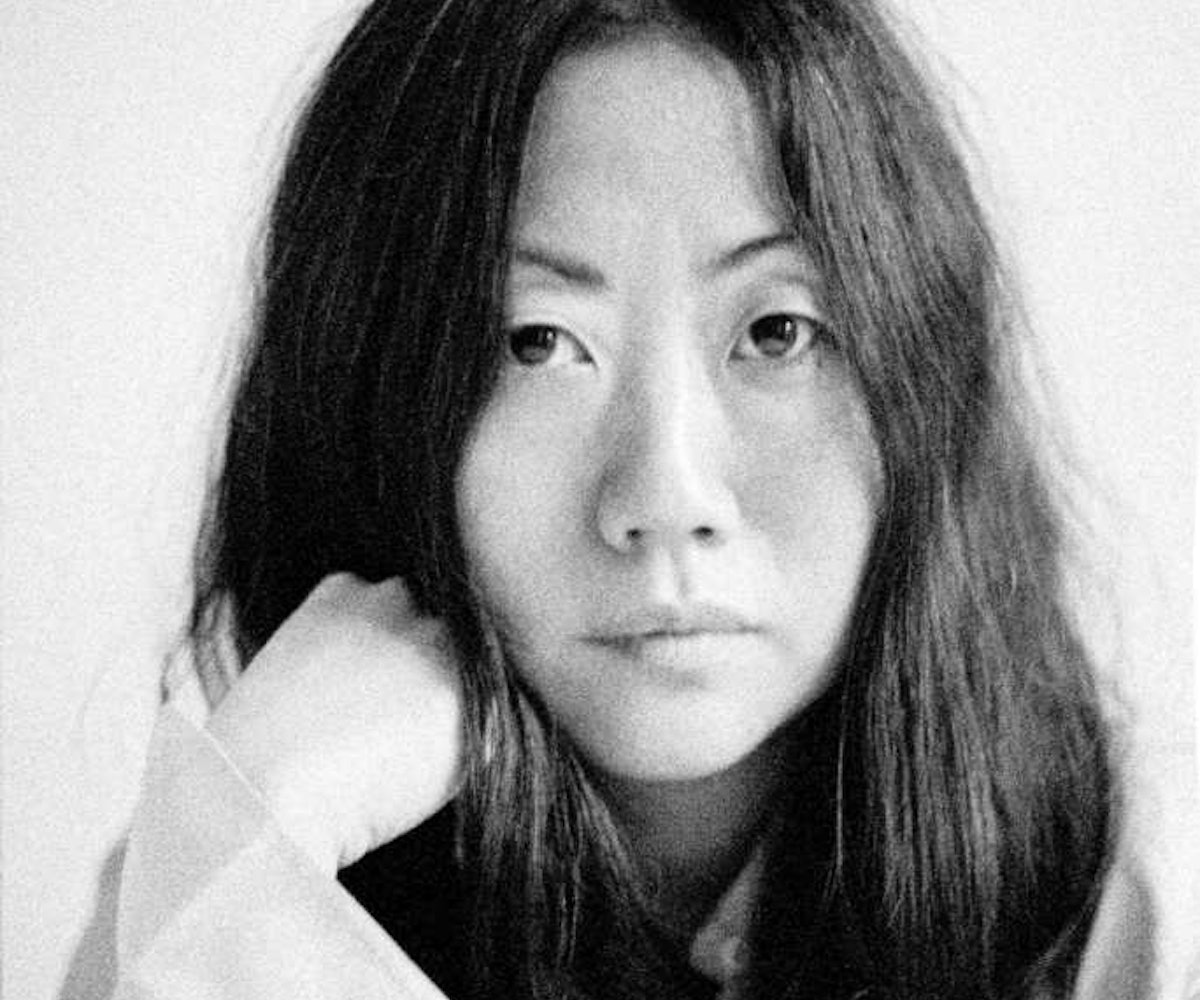 “I always loved the idea that girls can be a gang of punks,” Christine Nielsen, founder of the brand Hyun Mi Nielsen, says.

Hyun Mi Nielsen presented at Paris Haute Couture Week for the second time this summer, demonstrating her version of "twisted couture." With feminine details like ruffles juxtaposed with more masculine, utilitarian items (think: oversized ruffles sewn in the back of a tweed trench coat), Hyun Mi Nielsen’s collection feels like it could outfit a super-cool tomboy in Doc Martens headed to a ball—or a rooftop party on the Lower East Side of Manhattan.

With asymmetrical dresses in hues of yellows and oranges paired with baseball caps and wedged heels with an edge, Nielsen is designing couture that leans toward wearable daywear. Other standout pieces include a knee-length, full-skirted dress made with patchwork denim and a suit blazer with slits that reveal nipple caps.

“I would like the women to wear my clothes to be strong, independent, and able to move around easily. What does everyone wear every day? Jeans and trousers—that’s why I thought it was relevant to include them. The woman of today is mobile. She has a career, she juggles many things, but, at the same time, she is beautiful and decorative,” Nielsen says.

Nielsen’s edgy take on couture reveals something about her past: Before starting her own brand last year, she was the womenswear studio director at Alexander McQueen. Though she mostly worked under McQueen’s successor, Sarah Burton, she refers to the late designer as her greatest influence and praises Burton for being an important teacher. “Alexander McQueen is my greatest inspiration. He touched a lot of people, and he definitely made his own mark in fashion. I [also] learned so much from Sarah. Her dedication [has inspired] my own approach in design and my method of working,” Nielsen says.

Her accomplished career path has also taken her to Balenciaga, where she worked alongside Alexander Wang as the womenswear studio director, as well as Givenchy and Burberry.

Nielsen’s personal history also adds texture to her story, and perhaps even her professional approach. Though the Korean-born adoptee was raised in Denmark, she wonders, “I don’t know if you can say that my [disciplined] work ethic is ‘Korean,’ but when I went to Korea, I saw they are such hard workers. When you go there, it feels like a strong, crazy country on the move. However, I feel very much that I’m not Korean when I am in Korea. That’s such a complete contrast when I’m completely Korean to look at, but I do feel Danish in everything: my aesthetic, my taste in materials, my sense of quality,” she shares.

It’s safe to say that her design philosophy is Danish in nature. Denmark, a leader in sustainable fashion, also influences Nielsen’s commitment to creating a fair and ethical business. “Sustainability is the future of fashion—I believe it’s very important to buy locally. I use European materials. I also think that sustainability is about the hands that the garments pass through. It’s very important to me to produce in Italy and in France because I know that people have a good life: They have a pension, they get paid extra if they work weekends. It’s an ethical way of working. It’s important to know that the people in the production chain are empowered, that I am supporting a system that makes sure workers have a good life,” Nielsen says.

In an industry that moves in a state of constant immediacy and speed, Nielsen instead aspires to be rooted in strong storytelling, craftsmanship, and honest materials, inviting us into her unhurried world. With a nod to '50s couture (also known as its Golden Age), Nina Simone, Jean-Paul Gaultier’s pointy-boob corset made infamous by Madonna, folk costumes, and the romance of a Scandinavian summer, Nielsen invites us to sit and stay awhile, tracing the common thread among all her influences.

When asked how she wants her designs to be remembered, she says, “I hope it’s a mixture of wearability, poetry, romance, and empowerment. I design for the active woman, that’s why I choose to have simple dresses and decorative coats. But fashion should also be about dreams and aspirations… I design for me, but also for the love of romance.”