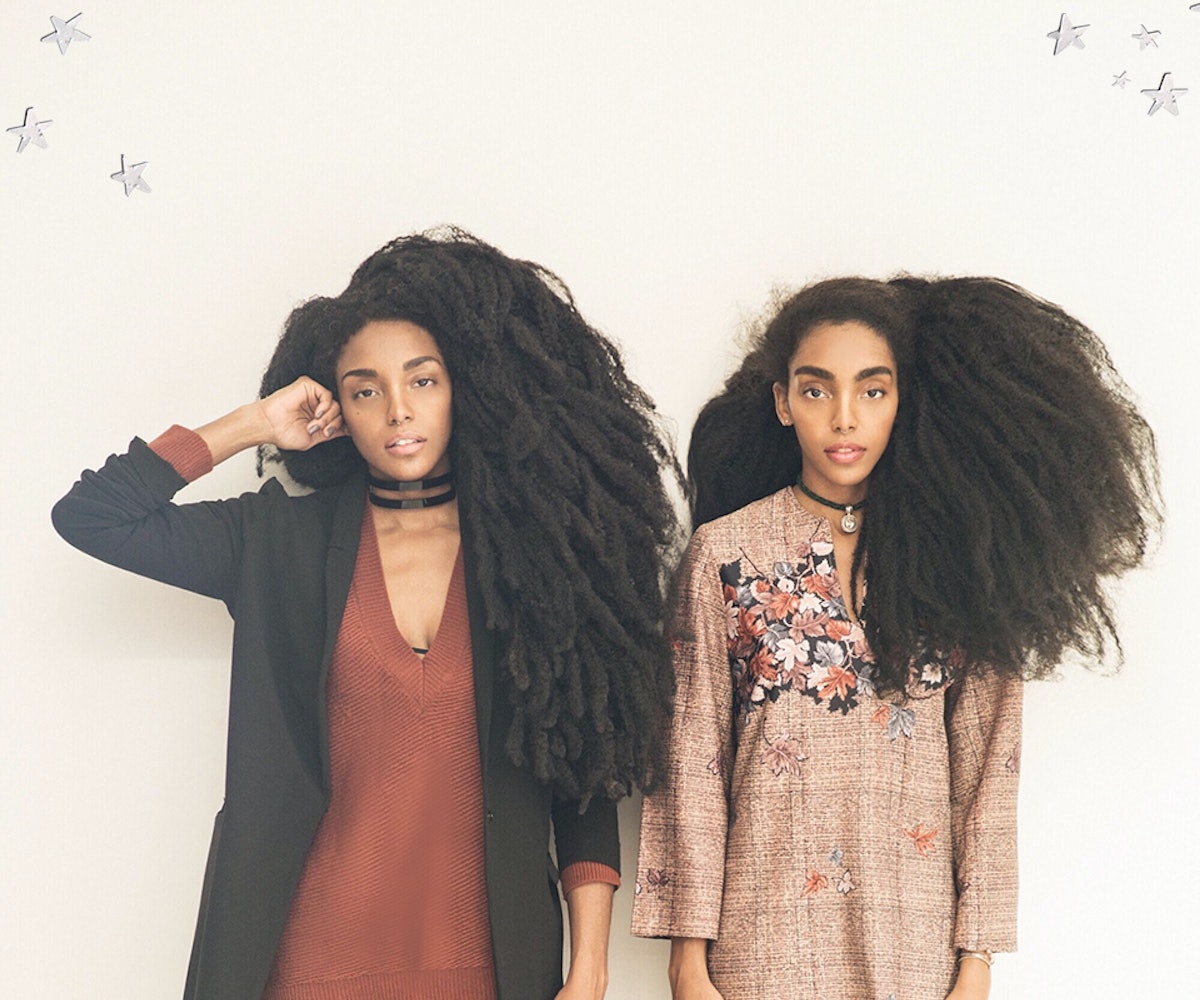 If you've heard of Urban Bush Babes, then you're familiar with Cipriana and TK Quann. The 28-year-old identical twin sisters recently signed with IMG and have been taking the industry by storm in all fields. They've been nominated on best-dressed lists galore for their unique senses of style, and that's nothing compared to everything else they've already done. But when the Brooklyn babes aren't starring in campaigns for ASOS, & Other Stories, and Gap or features for Vogue and W Magazine, Cipriana is the co-founder and editor-in-chief of Urban Bush Babes while TK is known by her stage name, TK Wonder. Having been "writers since the womb," this all comes naturally to them.

TK got started as a performer through spoken word poetry and has opened for artists like Sting, Nas, Justice, The Prodigy, Erykah Badu, Gossip, and Queens of the Stone Age. "My sister taught me what it meant to be fearless, something I am still learning till this day," says Cipriana. "She is the type of person who will dance by herself like no one is watching in a room packed full of people."

In the five years since Urban Bush Babes officially launched, the site has become an amazing source of information for fashion, hair, beauty, health, food, film, photography, design, art, and culture. Cipriana and Nikisha Brunson created the site as a way for people that are comfortable in their own skin to "connect, inspire, and share" with one another. TK is also involved as an executive contributor.

Both sisters expressed their excitement in continuing their journey together. "I know without a doubt that if I did not have my twin in my life I would not be the woman I am today," adds Cipriana. Get to the 411 on the Quann sisters in the interview, below.

How do you maneuver your industries as black women?

I am fully aware that diversity should be the norm but is not in the beauty, fashion, and mainstream media. This ideology of the 'blonde hair, blue-eyed All-American beauty' is riddled in the fabric of this country and rings false in an era where our country is more diverse than it has ever been. Women of color should not be incessantly bombarded by images that do not reflect what they see in the mirror.

I maneuver the industry as a human being first. Others may limit me as a black woman instead of their equal. Some see color, some gender, others both, and that is their problem. I am not naive to the fact that [this] is the reality we live in. C'est la vie, but I refuse to make it my reality. I will not place those limitations on myself to conduct business. Yes, I am black, yes, I am a woman, and LOVE that part of me but that is not all of who I am. I am also a co-founder, an editor-in-chief, a writer, an artist, an activist. I will not be defined by my race or gender to maneuver through my industry—if others wish to do so, I have no control over their limited way of thinking.

I know when I broke a barrier within myself. When I reached a point when I no longer cared about the negative thoughts regarding the way I looked, particularly when I began my natural hair journey. At the start of my journey plenty of people, complete strangers, had derogatory opinions because in their eyes my texture was deemed too coarse to be attractive. I did not have loose coils. My hair did not blow in the wind. The term 'wash and go' was foreign to my strands. No way and no how could one just simply run their fingers through my hair. So with all that said, my hair texture was not appealing to many others and albeit I reached a point in my life a long time ago where this feedback had no bearing on the way I felt about myself. It was still difficult. I truly broke a barrier within myself when I no longer allowed those who were not confident with themselves and closed-minded to the multifaceted diversity of beauty to have any power. Social media was a great way to help exhort those who were going through the same thing—just by being comfortable with the woman I am and not letting my confidence be defined by what people thought about what grew out of my head. I broke a barrier when I no longer permitted narrow mindedness to hold any power over the way I choose to live my life.

It had nothing to do with being a black woman but to do with my own inner struggle of self-belief, in trusting I could do what I love and work full time from just that. I worked a 'nine–to–five' for years to support myself while I worked on building Urban Bush Babes. Which means every day, I mean EVERY DAY, including weekends after work, I would go home and delve into more work on my passion, sometimes pulling all-nighters. Even my coworkers knew not to ask me if I wanted to hang out after because my answer would always be 'I have to work on my site,' and of course 'I didn't have to,' I wanted to. It felt like a need—like something was wrong if I didn't, and I knew then I had found something I loved! After years of commitment pulling double duty in two jobs, one I loved and one out of necessity, I had to take an honest assessment and step back to see if I was still holding on to the nine–to–five [job] out of comfort, lack of belief in myself, and fear of moving forward and turning Urban Bush Babes into a full-time job. The night before I gave my official two weeks notice to my nine–to–five [job], I had a very inspiring conversation with my twin sister and a really good friend, who asked me 'Why did I not believe I could work full time from my passion?' If I was asked that question years ago, I would have made every excuse in the book because I had not put the work in toward that passion but now because I had, I actually was a little offended and in that moment I knew I had defied the biggest odd. I finally believed I could do it, it was a moment of clarity, a matrix moment if you will. I had reached a stage in my life where excuses no longer seemed adequate. I wrote my resignation letter that night and have never looked back since.

I think in some aspects, growing into your identity based on race happens within environments that are not open or comfortable with diversity. At a very young age, my family dealt with quite a bit of racism growing up in Maryland which made me aware of those who had a problem with the color of my skin. They had a problem because I was black. I grew into my identity knowing that, "Wow this still exists." I never thought I had to grow into my identity because I was black. I've always thought if someone had a problem with my identity because I was black then that was their problem. Albeit it is my problem and our problem because it stunts the growth of a country moving forward. However when I say, 'that was their problem,' I mean I did not let it change the way I felt about my identity, and the way I thought and think about being black which is beautiful.

Well, 'growing into my black identity,' I was taught not to be defined by it or place labels. When I think of 'black identity,' I just think of identity. I know I am a black woman and love who I am, but sometimes I feel when we couple race and finding your identity, that is where stereotypes rear their ugly heads. By defining identity as black, European, Asian, etc, we are creating boxes and labeling what it means to be of that race. I grew up listening to James Brown, Nina Simone, Donny Hathaway but also Pink Floyd, Jimi Hendrix, Jefferson Airplane. I went camping and fishing every weekend with my Dad, learned how to change a tire, played the violin and flute, my mother was in a rock band. Whose to say that is not black identity?

Who or what are you inspired by?

My mother was and has always been my inspiration. She is the epitome of beauty. She is strong, beautiful, intelligent, giving, and considerate. As a child, I never thought I had to look elsewhere for inspiration. Why would I? I thought and still believe it is just the coolest to have a mother that continually inspires and encourages in the most loving way. As children, Cipriana, my twin sister, and I were teased. At an early age, I developed a high level of confidence because our mother instilled in us that those who exert negativity towards others lack confidence and a fledgling self-esteem within themselves. Their negativity should never change the positive way we feel about ourselves. I have carried those words throughout my life and will always do so in adulthood. I'm also extremely lucky to have Cipriana who inspires me daily in the best possible way. I'll get my alliteration on by saying she is so strong, supportive, and smart. No nepotism but I am so proud of the woman she has become. I see my mother in my sister and know I am a better woman because of them both.

Hands down my mother and sister. I feel so blessed to have two of my best friends as the most influential past and present sources of inspiration. These beautiful, intelligent, and supportive women have showed me the true meaning of unconditional love. My mother is the most positive woman I have ever known. She always had the mentality that you can achieve ANYTHING if you focus, work hard, and believe in yourself. As a mother, she worked and attended John Hopkins, one of the top colleges in the country, but yet always made time for us every single day. When I think back on it now, I don't know how she did it. Her impact influenced the way I see women as sisters who I want to encourage rather than competitors. Seeing my sister's success in music and songwriting sometimes made me feel pressured that I had not found my own path, but instead of feeding into that insecurity she encouraged me EVERY single day to try new things and assess from there. I know without a doubt that if I did not have my twin in my life I would not be the woman I am today. They have both showed me no one in this world can make it alone, and that is not weakness but strength to realize you are stronger in numbers.