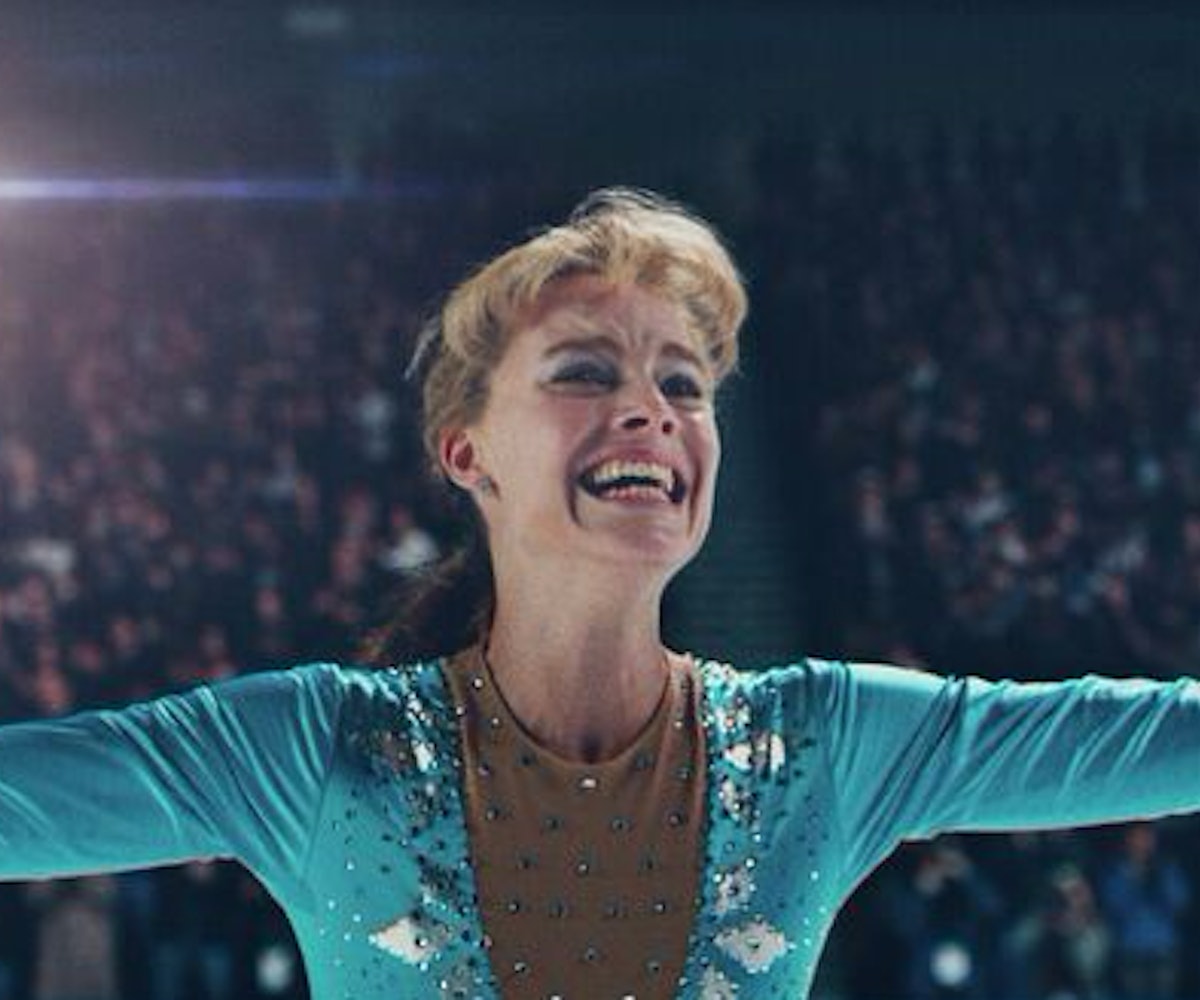 Figure skating fashion is tacky by definition. While the intense athleticism of the Olympic sport is undeniable, any mention of figure skating instantly conjures up images of tight, overly bedazzled outfits. With I, Tonya, a darkly comic look at the life of controversial figure skater Tonya Harding, now out, it's a good time to check out some cinematic ice-skating fashion.

Ice-skating movies (like most sports movies) tend to stick to a formula: There are the training montages, the moments of doubt, the competitions, and, finally, the wins (or, as in the case of I, Tonya, the undoing of success that comes with scandal). Figure skating costumes are made to be eye-catching, and in film, there's inevitably a contrast between fashions worn on and off the rink.

Skating fashion is ripe for parody. Blades of Glory (2007) takes the silliness at the heart of these looks to the extreme, with Will Ferrell and Jon Heder playing a figure skating odd couple (just go with it) in dopey "conceptual" costumes. The tight, sparkling "fire and ice"-themed costume, complete with fringed sleeves, is truly a pièce de résistance, an example of the potential homoerotic spectacle of skatewear taken to the extreme.

Ferrell, as the excellently named sleazebag Chazz Michael Michaels, and Heder, as the wimpy Jimmy MacElroy, are obvious opposites. Off the rink, MacElroy wears a white suit that wouldn't be out of place at a disco, while Michaels shows up in a black leather look that's a parody of rock star machismo.

Skating films provide an ideal setting for odd couples. The setting of the ice rink, and the intensity of Olympic competitions, attracts extremes. A movie like The Cutting Edge (1992) is a corny but crowd-pleasing, earnest example of this, featuring a stuck-up figure skater, Kate (Moira Kelly), who ends up paired with Doug (D.B. Sweeney), a hockey player. It's hardly a spoiler to say that they end up winning at the Olympics. The film fits neatly into the formula and offers some peak '90s fashion. Kate has an impressive wardrobe of turtlenecks, and the neck acts as a shield, a sign of her hauteur.

Her prim white turtleneck and hair tie contrast with Doug's team jacket and sweatshirt. As a hockey player, Doug is coded as a classic jock, and he's visibly uncomfortable when being fitted for a spangled, matador-inspired skating competition costume.

Kate may wear baggy coats sometimes, but they always have some sort of feminine detail, like this chintzy gold-trimmed number.

When it's time to compete, her red sparkly dress is surprisingly understated.

I, Tonya, with its costumes based on looks that actually graced the Olympics in the early '90s, fluctuates (often frustratingly) between pseudo-tragic biopic and kitsch self-awareness. In a few key moments, we see Tonya (Margot Robbie) sewing her costumes. She's from a poor background, with a demeanor famously considered too brusque and not befitting a proper figure skater. When she's off the ice, she wears a sassy uniform of high-waist jeans and a bomber jacket, and when it's time to skate, she goes for garish, bright colors that become somewhat poignant when we consider her sewing.

The theme of glitz unites cinematic ice-skating fashion, and throughout these three films, it can be intentionally absurd, or elegant, or somewhere in-between. Fashion on ice represents fantasy and femininity. In the case of I, Tonya, the fantasies of glitter and bright colors and flippy skirts, unfortunately, aren't enough to save the doomed protagonist from too-fierce competition and bad men.