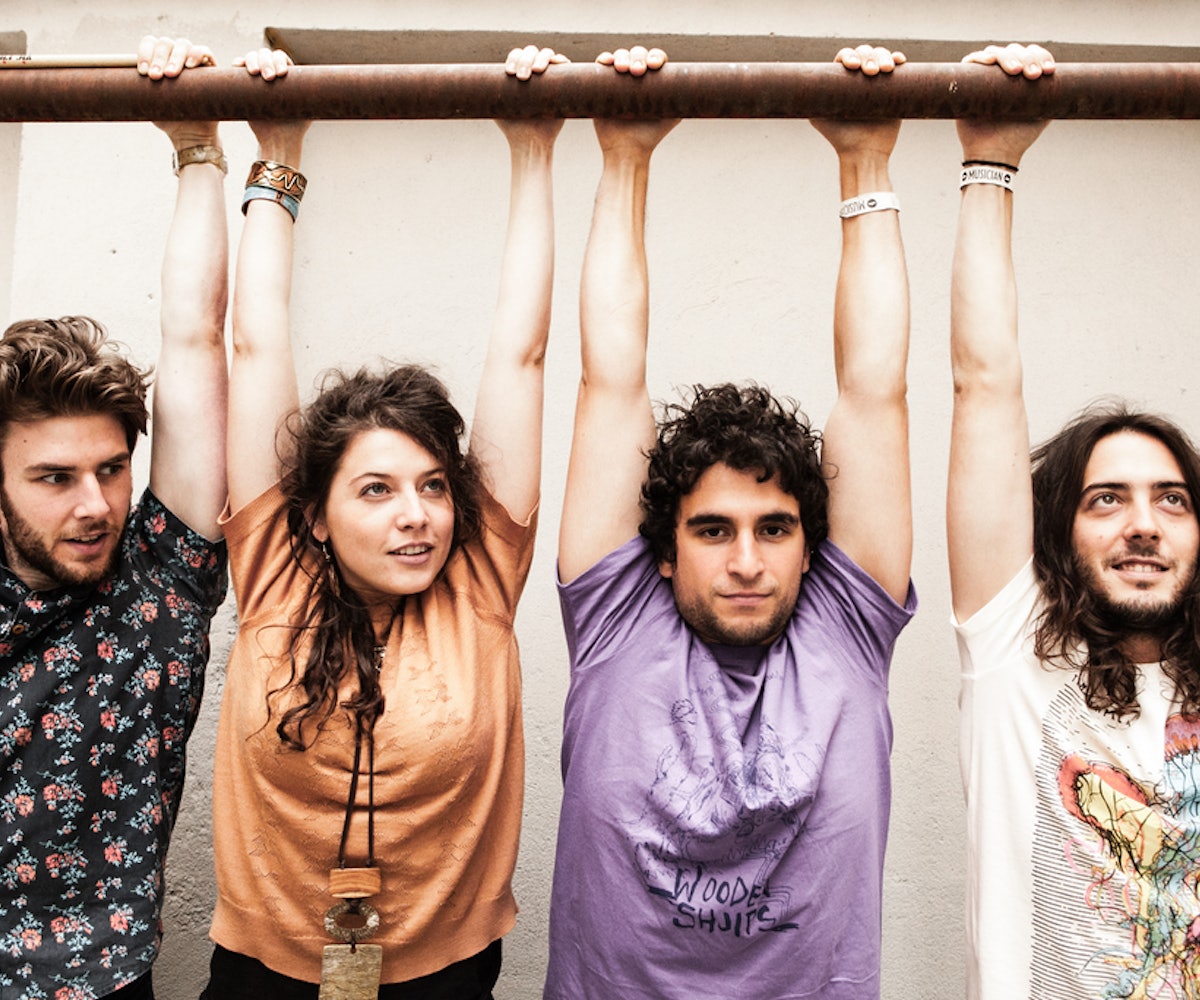 It makes sense that

's music feels hard to pin down. Their four members grew up all over Europe, and as a result, their songs sound like world music filtered through the lens of four young people who came up on music blogs. Leïla Seguin grew up in France, bassist Alejandro Romero in Spain, guitarist João Seixas in Portugual, and Joshua Oldershaw in the U.K., and all four of them met at Loughborough, England, where they first began playing music. After relocating to London, the group eventually gained enough traction to get noticed and signed by City Slang records, who gave them the tools needed to record their debut LP,

, a kaleidoscopic, genre-leaping anthology of luminous music that juxtaposes sing-along melodies with wordly rhythms. Below, we get to know them a little better, including their love of

and their desire to record classic Disney songs.

We like to think of it as warm and/or cozy. The slash used in the previous sentence indicates that the members of the band disagree on the specifics.

Out of brute luck. We used to live and play in Loughborough (a small town in the middle of England) and one day, through friends in Paris, we met a man (a real, fantastic man) who offered to become our manager. He became much more than that, and from then on, things just started happening!

If we would be making some money, that would be great. Not much. Just for food, rent and some "fresh" beers.

If our label decides to make the same mistake again and we're allowed to make a second album, that would be it. Otherwise, we might start considering opening a small vineyard in South France. Maybe farm some animals too.

The teams we have working with us. We can say that we really are taken care of! Also, we have all lost some weight, since it began.

Late Brian Wilson. Or Woody Allen, but we would keep him inside the cupboard at all times.

Late Brian Wilson, without a doubt. We would love to release a record full of classic Disney movie songs.

Pre-history because of all of those big dinosaurs! Although, Josh gets really irritated in nature and Leila is scared of essentially all animals, but we all love

With a cup o' tea and a book. With some tapas and wine, sometimes. With Brian Eno, as well. Or by constantly re-watching Pierce Brosnan's James Bond movies.

Alejandro was very, very popular, but only at home according to his father. Joao didn't care much, although this was a defense mechanism for coping with caring too much about what others thought of him. Josh used to be an eating contest referee. Leila was beautiful and, may we add, still is. In fact, it was exactly because of her ability to keep that unworldly figure for such a long time that she was offered a place (temporary, of course) in the band.

We're all proud of Joshua's godlike ability to restrain himself and be the designated driver in early mornings.

Joshua gets twitchy if tea has been brewing for a long time. Alejandro and Joao are terrified of bees ("Imagine if they were our size!"). Leila, as far as anyone knows, is not scared anything. She was once heard saying, "Death is a f****** pussy."

If one day we could come up with original ideas, we'd be satisfied.