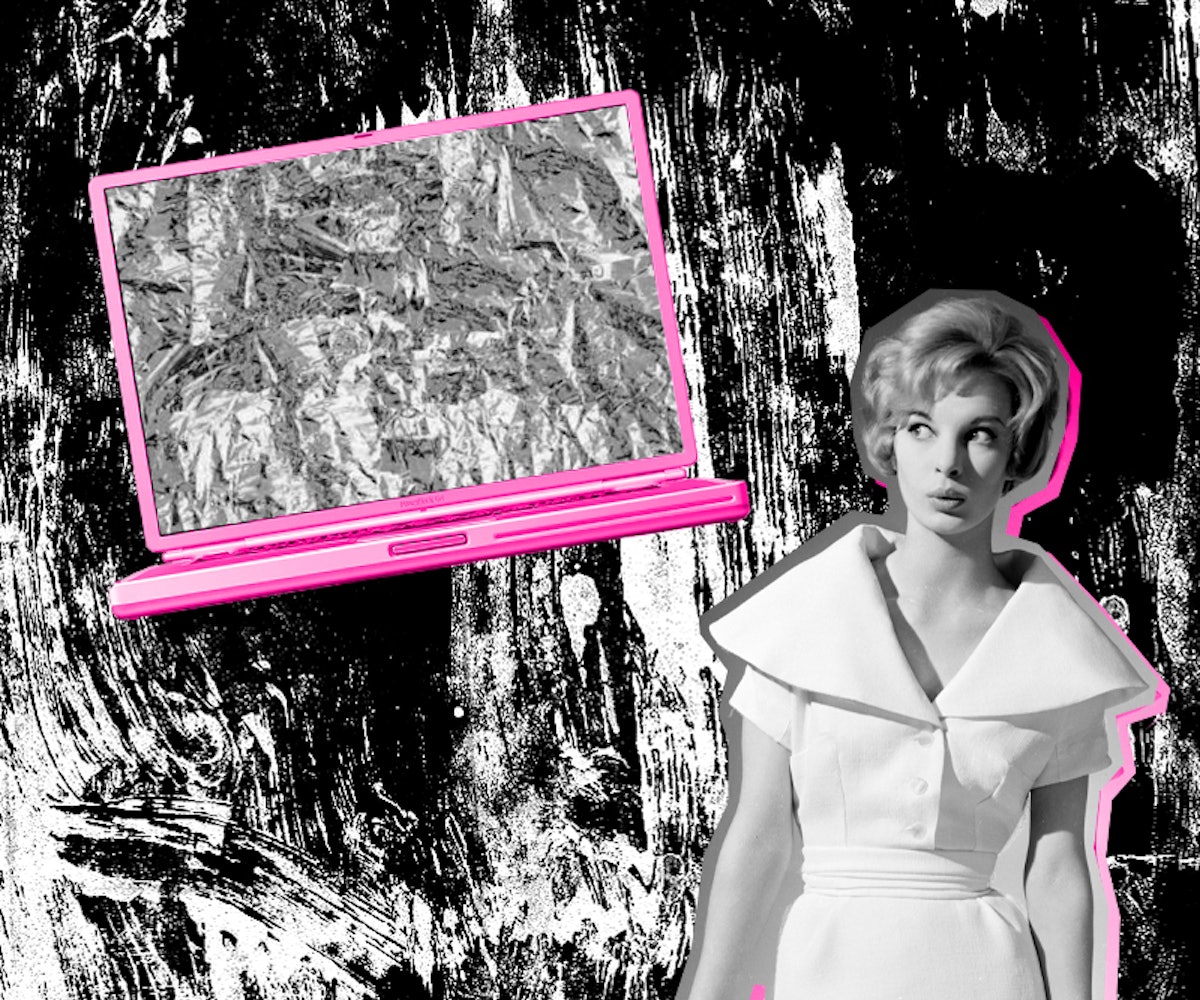 As a DJ, I broadcast where I am almost every time I go out. I encourage strangers to come see me at locations I’ve never been to, take photos with people I’ve never met, and generally engage in behavior that’s not endorsed in normal, everyday life. As an artist, my career is reliant on social media, and I have to put myself into the digital realm where I invite people to interact with me in real life (I love to do it!). Though I have to be more hyper-vigilant than the average person, my job is my passion, and there’s the expectation that others won’t cross the lines I set.

One day, a man approached me at a show after a gig. He had heard about me online and was thrilled to have seen me live. We had an amazing talk—he loved dance music, had just moved to the city from overseas, and said after watching me perform, he had become a new fan. It honestly warmed my heart. Before we parted ways, he asked for a business card, and I handed him one without a thought. If I had known what would follow, I would have run the moment he said “Hello.”

He began coming to more shows, then started emailing to find out about shows in advance or to get on the guest list at venues. Something in my core had a feeling that things were amiss, and I got a gut check that he wasn’t just a fan, so I told my boyfriend and started forwarding him every message that was sent. This stranger began referring to me as his “princess,” then said he was my “soldier,” and each event was a “mission” for him to attend. I became freaked out, worried about his psychological state and my safety. I started actively screencapping his tweets, putting his emails in a separate folder I marked "Stalker," telling club managers and door staff to stop letting him in... and I stopped responding. When the walls were up, and he no longer had access to me in real life or online, that’s when it all started to unravel. I began receiving anonymous messages on Spring.me (formerly known as Formspring), where he threatened to come to my house and hurt me. He sent livid emails saying, “FIX THIS ASAP AND STOP!!! YOU ARE MAKING ME CRAZY, I’M SO MAD!” In the next message, he would apologize and say I was the love of his life; that God came to him and said we were supposed to be together. "Please don't let others talk bad behind my back," he wrote. "It's not fair. I'm mad 'cause you judge me sweetheart."

I had always been someone who felt very much in control of their life, and now, someone else was pulling the strings, someone like a vapor, someone who existed, yet didn't. The only thing I knew for certain was his email address, and I had no idea what to do with it. I cried often, scared to leave the house and to go to my places of work, places that already had the potential to be unsafe, packed with intoxicated people and often requiring late work hours. Despite the horrific anticipation that came with every new notification, I also decided I couldn’t block him, needing every shred of evidence he left for me online. Then, one night, before I had to go DJ in downtown Chicago, he tweeted about bringing a gun to come and see me. I canceled the event and that next day, I filed the incident with the police. Or rather, I tried to.

What I, unfortunately, found out is that while cyberstalking is a federal crime under umbrella laws, there is a lack of specific federal legislation, meaning filing usually comes to a state level, and ultimately, your local police department. Mine was untrained and knew shit-all about IP addresses and Facebook. As I stood there at the precinct counter, tears welling up while I tried to communicate the suffocating threat I felt every day from someone who was essentially anonymous, the cop handed back my paperwork and said, “You can’t file against him without the perpetrator’s address.” I was shocked. It was up to me, not the police, to find out information about the person who threatened my life. Thus began a dangerous game of cat and mouse where I, the stalked, was responsible for stalking, so I could obtain the paperwork to keep him away from me. Twisted, right?

A month later, I stood in front of a judge, handed her a clipped packet of more than 100 pages of compiled messages, and was immediately granted the temporary restraining order. If you think it ends there, it doesn’t. He still had to be served, and the detective assigned to my case not only admitted he didn’t know his own Chicago Police Department email address, he gave up on trying to serve him after two days of visiting his apartment. I tried to tell him and the department I could pinpoint exactly where he would be based on his Twitter updates... and they told me, "What's Twitter?" I was left only with that temporary order and for the next month I gave one to every club manager I worked for, hoping I wouldn't see his face again, and that I would be safe.

If this situation sounds infuriating, it’s sadly a typical representation of cyberstalking laws (or lack thereof) in effect. Yes, there is the Violence Against Women Act, passed in 2000, and yes, cyberstalking is included under the federal anti-stalking and harassment laws, but there is no clear global or national definition of cyberstalking. Combine this with continually improving technology and an internet environment where the vitriol of a death threat is taken as seriously as an EHRMAGERD, and we're lead to situations like mine, helpless against inefficiency, lack of resources, and believability. Though there were an estimated 2.5 million cases of cyberstalking between 2010 and 2013, only 10 were pursued by federal prosecutors.

About four out of every ten internet users will experience varying degrees of online harassment. Of those experiencing harassment, young women between the ages of 18 to 24 are the most likely to experience severe forms: stalking, online sexual harassment, and sustained harassment (lasting for more than two years). Unlike traditional stalking, where about 75 percent of the victims know who the stalker is (most on an intimate level), about half of cyberstalking victims either say a stranger is responsible or they don't know the real identity of the person involved. As for how people deal with it? Most unfriend, block, or report the person to the website or online service they are being harassed on. Only about five percent ever wind up reporting the problem to law enforcement, and those that do often hit the same walls I did.

In a piece for the Pacific Standard, journalist Amanda Hess recalls how she once called the police after a string of particularly terrifying threats. A couple hours later, an officer arrived at her hotel, and after recounting her history and the digital abuse, she was met with the exact same response I heard. The cop looked at her and said, "What is Twitter?" When blogger and podcast host Rebecca Watson reported threats targeted at her to the FBI, the agent expressed trouble opening the screenshots Watson had sent, and soon after stopped replying to her altogether. When Time journalist Catherine Mayer reported a bomb threat placed against her, the officers she spoke to did not understand Twitter or IP addresses, and simply advised her to unplug.

Katherine Clark, a Massachusetts congresswoman, says there is not only a disconnect between what people are experiencing online and the perceived threat by others, there is a lack of understanding by police officers when it comes to being versed in cybercrime and how they can help. Even she notes she's had law enforcement ask "What is Twitter?" (But seriously, what is it with cops and not knowing Twitter?)

Unfortunately, we currently exist in a world where streets have clear laws but digital connections don't. My stalker is still out there, and truth be told, I'm still not sure of his legal name. While sometimes it feels like it was so long ago, I can't treat it that way. I still have his emails, and every so often, I visit his Facebook profile, just to keep tabs. And while our judicial system doesn't seem to know what to do as a whole with cyberstalking, or even how to define it, I can do my part to keep myself safe. Be aware of how to protect yourself, and if you feel that you are the subject of cyberstalking, act. After going through it myself, here's what I've learned is the best route to take.

If you are a victim of cyberstalking:

1. Save all emails, messages, and other communications for evidence. Print out copies, but also keep the originals. It is important the electronic copies of emails, voicemails, tweets, etc. are not altered in any way.

2. Save all records of threats against the victim’s safety or life. This includes all written and recorded threats. Make sure to also log the date, time, and circumstances surrounding the threat.

3. Find the IP address. If you are receiving abusive emails and don't know where they are coming from, find out how to obtain the originating IP address, and provide this information to authorities along with the rest of your documentation.

4. State that you do not want them to contact you, and then stop engaging. Stalkers often derive pleasure out of provoking someone.

5. Have a personal safety network of friends and family, and make sure they are aware of your situation.

6. Get in contact with your local authorities and seek a restraining order. Specifically, ask if there is an "internet crimes division."

8. If you feel your safety is at risk, try contacting your local FBI office.

10. Keep detailed records of contact with ISP and law enforcement officials. It is important to keep a log of all reports made to any agency or provider and to obtain copies of the official reports when available.