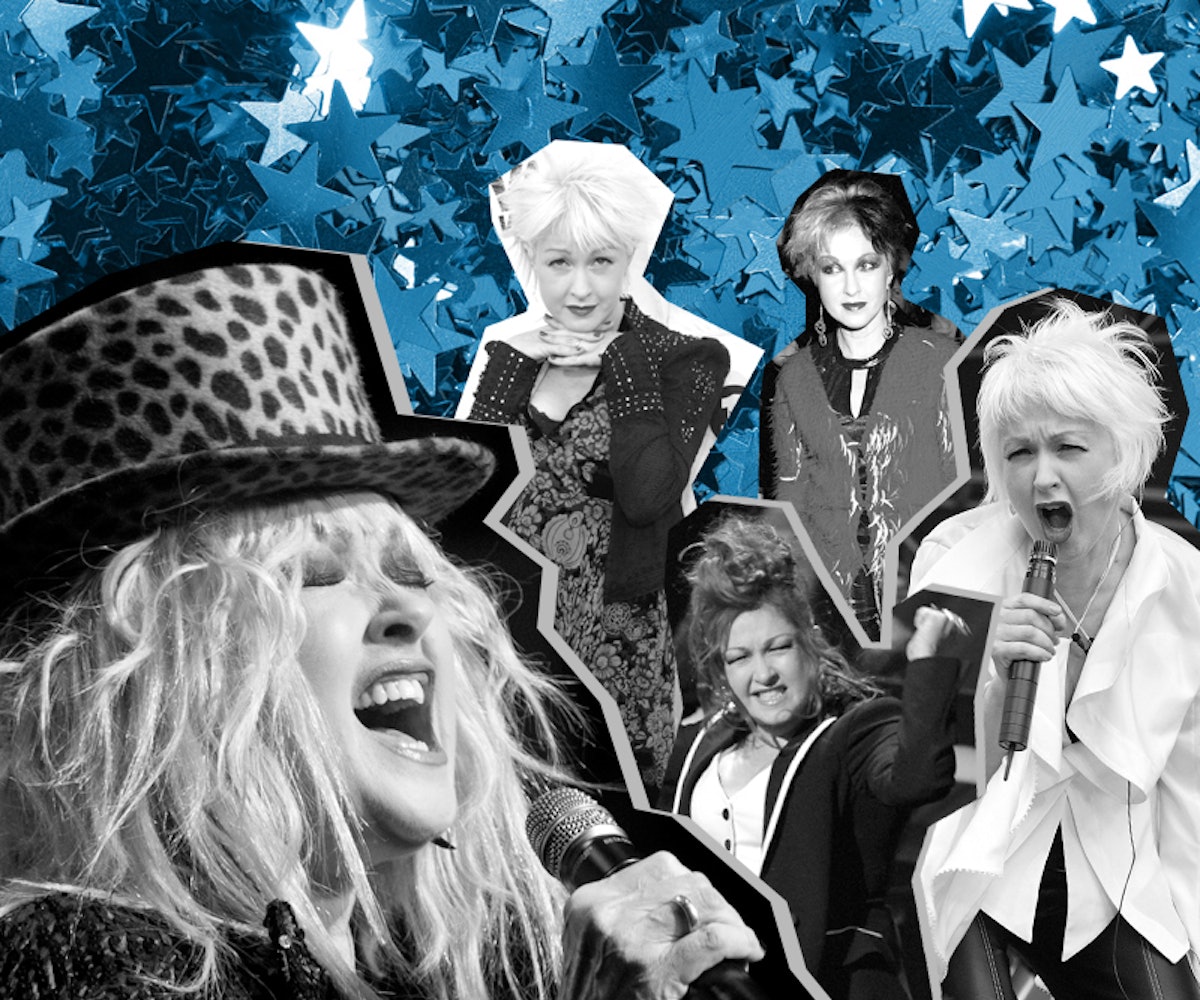 There are a lot of things that run through your head when you’re talking to Cyndi Lauper, but mostly it’s, "Oh wow, I’m talking to Cyndi Lauper," and all of your intelligent thoughts drown out. It’s not so much a case of being icon-struck—although that certainly happens—as it is a case of pure novelty: She calls you "doll" in a New York voice that can hit notes most people couldn’t reach with a ladder. What’s running through your head is how every syllable is surreal.

At 62 years old, Lauper is still the same neon-dipped caricature that sprung up on pop culture’s radar in 1983 with her massive hit songs "Girls Just Want to Have Fun" and "Time After Time." She still has lightning sass and operates without barriers.

After growing up in Queens, Lauper left at 17 to escape an unhappy home life. With her dog Sparkle in tow, she went north to Vermont, hitchhiking and working odd jobs at racetracks and roadside diners while taking art classes at Johnson State College. "I lived by Lake Champlain; it was freezing, I didn’t have a coat, it was so cold," she says. "When I saw that lake freeze and start to steam, I was really frightened because as I was growing up we didn’t have a nature channel."

But there were two defining programs on TV that set the tone for Lauper’s life ambition. One was a variety show called Arthur Godfrey’s Talent Scouts, which she watched as a four-year-old with her nanna on the evening that a then-relatively unknown Patsy Cline performed. "She sang so great, she looked so pretty, and I guess she won, I’m not sure. But I think it was very good for her because she got a record thing," she recalls. "And then my grandmother also used to watch Queen for a Day, which was usually about a woman who worked very hard and had some kind of terrible experience and still she toiled and worked for her family, and so they give her a crown and maybe a mink stole, and a washing machine. And that was a defining moment for me because I would look at that—and I’d watch my grandmother cry. And I’d cry too because I felt sorry for the woman, but I also knew what that washing machine meant—some kind of appliance to make their toil less of a toil. But to me, I would look at it and I would think, 'Man, they make a woman a queen for a day, so then they give her a washing machine to make her go do work again? What kind of a queen is that?' I kept thinking, 'That’s not a queen.' Queen Elizabeth, I don’t think she’s doing the laundry. So it was at that moment I decided I’d rather be a singer, know what I mean?”

A lot like the troubled rise of Cline, Lauper's reality wasn’t as easy as the wish. It took some cringe-inducing nightclub tribute acts, a failed band record deal, and total bankruptcy before Lauper found success with her one-last-shot debut solo album She’s So Unusual in 1983. The people who once threw rocks at Lauper for "dressing funny" were stunned to see her perform at the 1985 Grammys (and take an award home for Best New Artist, all while dressed like a joyous freak queen). That same year, Lauper was invited to sing in the most boss choir of all time for Quincy Jones, Michael Jackson, and Lionel Ritchie’s USA for Africa "We Are the World" video. In the '90s, she crossed over into acting and won an Emmy for her role on Mad About You. She tried her hand at Broadway and won a Tony award for writing the original score to the international hit musical Kinky Boots. Tally it up and she’s just an "O" shy of an EGOT, so put shades on before looking directly at Lauper, because she is a motherfucking solar eclipse.

As the rainbow-haired patron saint of misfits, Lauper kicked the door open for artists like Lady Gaga, Katy Perry, P!nk, and Gwen Stefani. Today, she fan-girls over the musicians she thinks are doing it right. "I’m a Rihanna gal—I just love her," she says. "I think Lady Gaga is great. I like Nicki Minaj. Oh my gosh, I love that little rap girl from Australia. She is cute. I love Iggy; she’s a piss. I think there are a lot of young women and men coming out that are really wonderful. I think talent is talent and they gotta develop it and become who they are. And they influence the older artists, and the older artists influence the younger artists.”

Lately though, it’s the classics Lauper keeps coming back to, specifically those from country music. That’s what spurred Lauper to make her 12th studio album Detour, an Americana tribute to classic country songs. "Loretta Lynn and Patsy Cline, they were all over the radio when I was growing up, and westerns were part of our culture," Lauper says. "There were westerns in the movies; there were westerns on TV every Saturday morning. That was the bomb, you know… Wanda Jackson, Brenda Lee, and Elvis: those were the people I kind of cut my teeth on, and I feel really fortunate that I got to do these songs and revisit a time when it was all the rage." Detour is studded with collaborators like Emmylou Harris, Willie Nelson, and Jewel—who does some unexpected and frankly alarming yodeling—and it’s a riot ode to American music history.

Lauper’s music game is strong, but her most important legacy is perhaps True Colors, the 30-bed supported residence in Harlem she co-founded after learning that 40 percent of all homeless youth identify as LGBT. A long-time advocate for the advancement and rights of the LGBT community, Lauper has been around long enough to know that history isn’t a straight line—it’s a circle. "You have to understand that I grew up in the Civil Rights Movement, so I heard all the stories about why you couldn’t have a black person live next door... So when I grew up and I started to hear all this stuff about the LGBT, I’m like, 'Oh, I heard this record before, and it’s a crock.' Because guess what? Everybody is different from everybody else. Once you’re taking civil rights away from people, then your civil rights are up for grabs, too."

As she explains it, equality is key. "So I say if we’re all free, we’re all free. And at some time they’ll pay women as much as they pay men for the same friggin’ job. The way I am, I burned my training bra at the first women’s demonstration, so I’m very much a feminist. So when you come from that background, you kinda already see how important civil liberties are. So yeah, I stick up for [LGBT], I feel that they are the voiceless, especially the homeless LGBT youth, because they’re the most vulnerable. And who is going to stick up and open their big mouth? I got a big mouth. I’m not afraid of nuthin’."

Detour is available now. You can donate to the True Colors Fund here and find out about their work here.