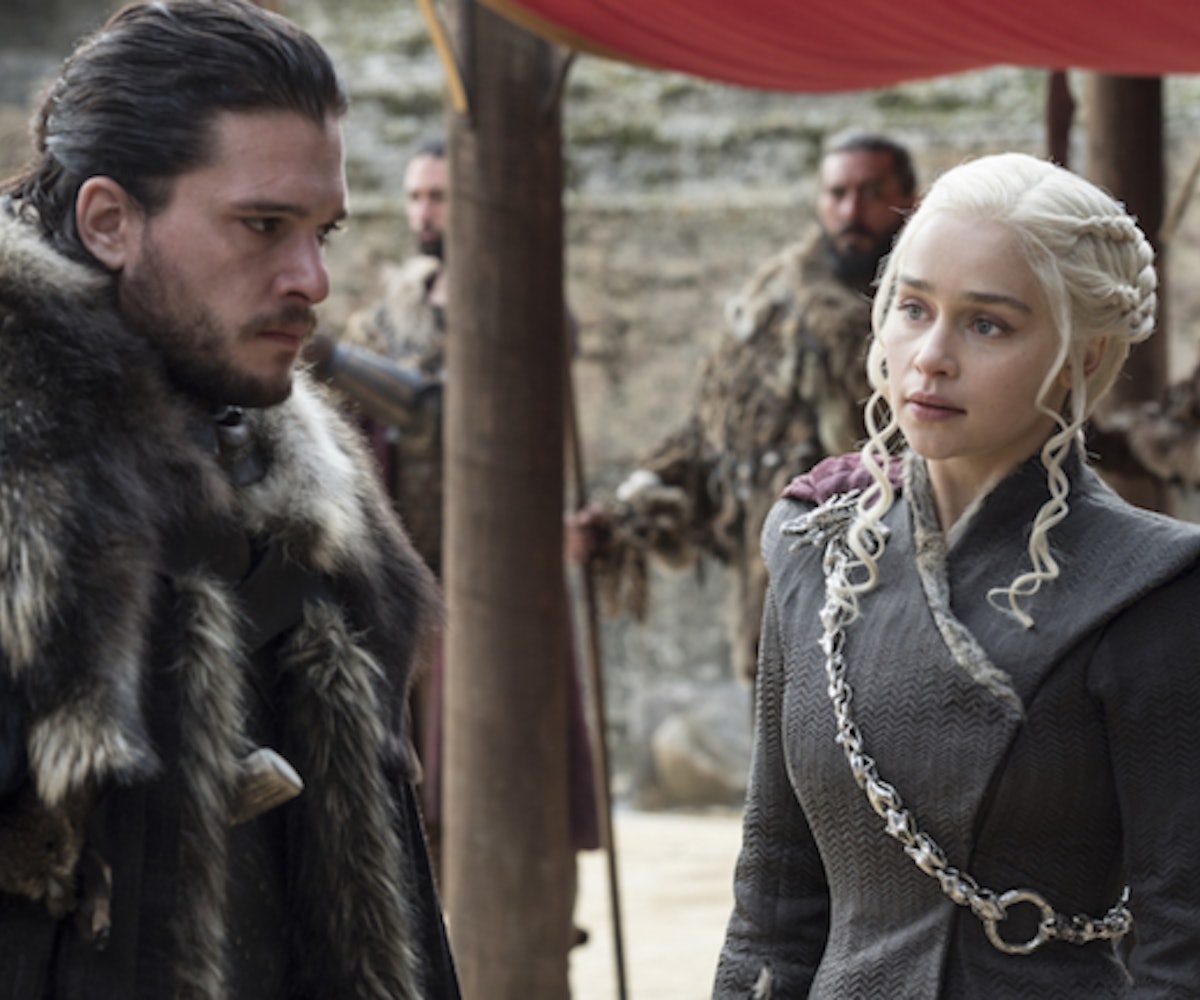 If there's one thing Game of Thrones really wants its audience to believe in, it's the infallibility of prophecies. The entire show, really, is premised on a prophecy, that of the existence of the Prince Who Was Promised, sometimes called Azor Assai; he—or she—is the one who will save the living from the Army of the Dead, from the Eternal Night.

And while there are still plenty of debates about who that Prince (or Princess, gender is fluid in High Valyrian) really is—Daenerys? Jon? The Hound?!—there is no doubt that the Prince exists because the one thing we see, over and over again, in this series is that prophecies come true. Think about the prophecy Cersei received when she was a young girl, the one in which she was warned that all three of her children would wear crowns of gold, but also be buried in golden shrouds. (That prophecy also warned that Cersei would be usurped by a younger, more beautiful queen, which, you know, looks to be happening as well.)

But there's another prophecy which has hung over the narrative—and the head of one character, in particular—since the first season. It is the prophecy given to Daenerys by the witch Mirri Maz Duur, who used blood magic to turn Daenerys' husband Khal Drogo into a practical zombie and kill Dany's unborn child. In the prophecy, Mirri Maz Duur tells Dany that Khal Drogo will only come back and Daenerys will only have children "when the sun rises in the west and sets in the east; when the seas go dry and mountains blow in the wind like leaves." This is all that is said in the show, though the book's prophecy continues with: "When your womb quickens again, and you bear a living child. Then he will return, and not before."

Now, because those possibilities are pretty unlikely, Daenerys has always assumed she can't have children. It's one of the reasons she embraces the title "Mother of Dragons" so much: Her dragons are, she's sure, going to be the only children she will ever have. But Game of Thrones has been hinting so much this season about the potential of a little Daenerys-Jon Snow child (she'd, then, be mother to a whole new dragon), that it's time to revisit this prophecy and see if maybe it has a loophole or two—because, apparently, we really want another little incest baby, since Joffrey turned out so damned well. (Then again, Dany herself is a product of incest, and we like her. So, who's to say, really?)

Let's take the first part of the prophecy: "when the sun rises in the west and sets in the east." That seems basically impossible, except for the fact that prophecies are rarely literal (except in Cersei's case!), and there's enough sun iconography in Game of Thrones to leave this open to interpretation. In fact, in the books, many people think this phrase alludes to the voyage that Quentyn Martell (the Martell sigil is a sun) takes from Westeros (rising in the west) to Essos (the east), where he dies trying to unleash Dany's dragons. In the show, this can be more broadly interpreted as the way in which the Sand Snakes and their mother Ellaria (Sands, yes, but the girls are Oberyn Martell's daughters, and they sailed with Daenerys under the Martell sigil) also went from Westeros to Essos and ultimately wound up dying in the eastern part of Westeros.

Then there's: "when the seas go dry and mountains blow in the wind like leaves." For the dry seas, that can be interpreted many ways, including the fact that the Dothraki finally managed to cross the actual sea—"poison water"—in order to fight for Daenerys. In that sense, the sea has "dried up," in that it no longer causes a problem for them to cross. For the "mountains" blowing "in the wind like leaves," that can refer to the fact that Ser Gregor Clegane, aka the Mountain, is shown to be defeatable. Yes, he still exists in a zombie state (so. many. zombies!), but he could be thwarted—as was hinted in the season finale by his brother, The Hound, when the two finally met after several years apart.

If all these things come to pass, which it seems like they are, then perhaps Dany's womb will indeed quicken, and she will bear a living child. How exciting. The only thing is: What does that mean for the rest of the prophecy? Will Khal Drogo come back??

In the second season, when Dany is in Qarth at the House of the Undying, she sees a vision of Khal Drogo and an adorable baby—but she turns away from them, knowing full well that that life is not hers anymore. Instead, she goes toward the Iron Throne, which she sees standing empty, as light snow falls about it, settling on its jagged surface. What does this portend, then, for Dany's future? Does it mean she will turn away from the past—and future—she once coveted, so that she can seek out her snow-covered destiny elsewhere? It's hard to predict anything for sure, but if one thing's clear, it's that there is almost certainly a pregnancy in Daenerys' future. If anything, in a world where ice zombies exist, it really shouldn't be so unbelievable that a new dragon will be born sooner or later.