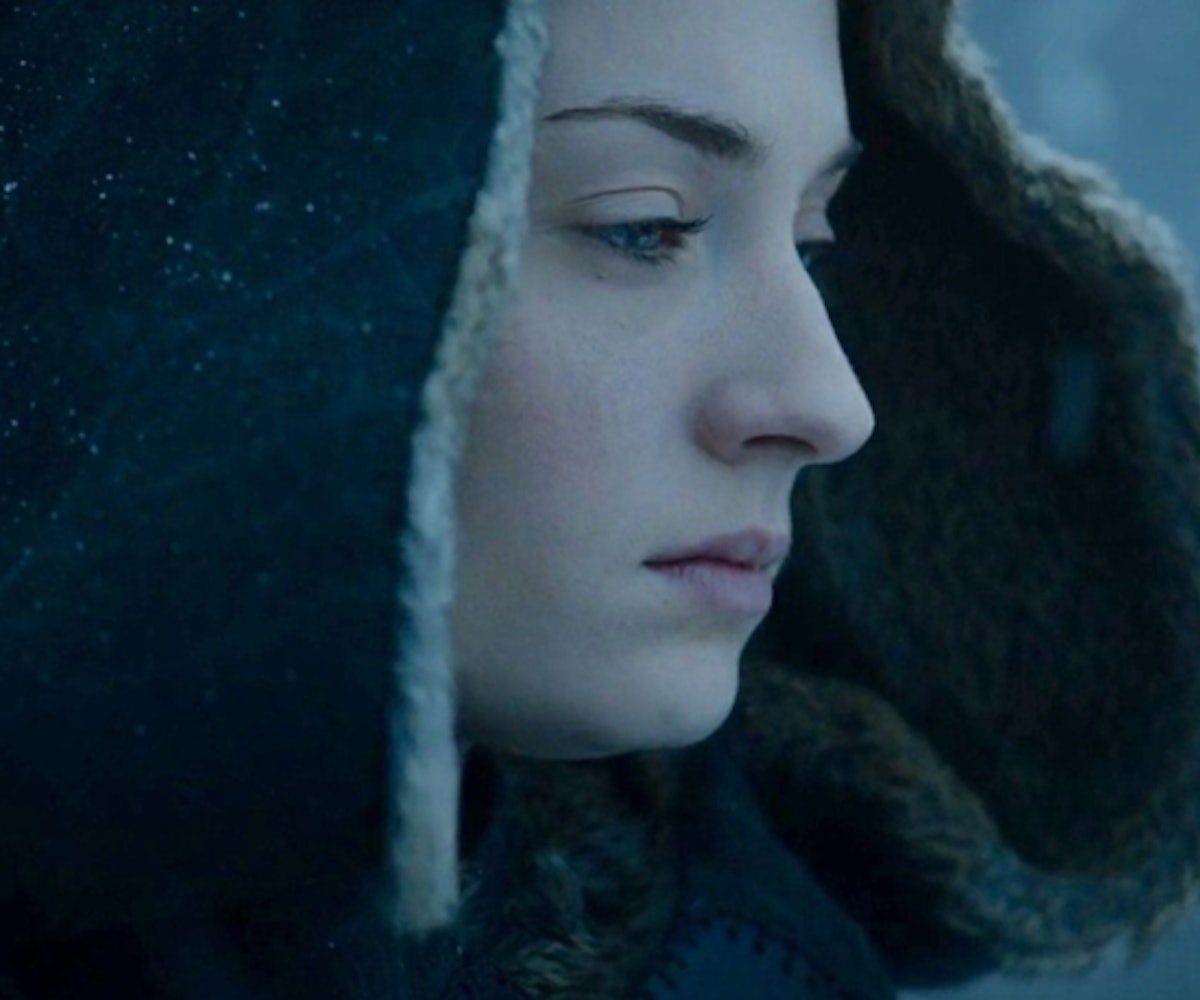 There were so many surprising moments in last night's season finale of Game of Thrones that the episode felt like one climax after another, after another... after another. It could as fairly be called exhausting as exhaustive, because of not just what happened to move the plot forward, but how much plot was covered. Though this penultimate season was shorter in length, it made up for it in story development, as the show—with its end in sight—rushes through narrative twists faster than Gendry can run across hostile, frozen terrain.

This episode started off by doing what this entire season has done so well: bringing together beloved characters whose paths have flung them to the farthest corners of the known world, all so they can have the kind of in-on-the-joke conversations with one another that fans love. In this case, we got the long-awaited reunions of such Westerosi odd couples as Brienne and the Hound (both acting like proud parents of their murderous daughter, Arya), Brienne and Jaime (please, Jaime, forget Cersei and fall into the arms of this other powerful blonde), Bronn and Tyrion (we miss the days when these two just traded barbs with one another), Tyrion and Pod (we're always down for another reference to Pod's "magic cock"), and the Hound and his now zombified brother Ser Gregor (though it was no Cleganebowl, the Hound did insinuate that his brother knows how death is coming for him, which will be interesting to see in Season 8).

And then, of course, there was Tyrion and Cersei, whose reunion was notable for the ease with which it could have ended in death, but instead resulted in an affirmation of Lannister life, as Cersei subtly revealed (if, you know, it's subtle to turn down wine, despite being a known lush, while rubbing on your belly) that she's pregnant. (Or "pregnant.") The two siblings were discussing the future of Westeros, and they were doing it post the historic summit, in which it became quite clear that the Army of the Dead threat is real, and that Euron Greyjoy continues to suck the most. While, at first, it seemed like perhaps Cersei would view the existential threat posed by the White Walkers with the seriousness it deserves, that was all dashed to hell when Jon "I can not tell a lie, even though my whole life is (unknowingly) a lie" Snow declared his allegiance (read: love-lust) to Queen Daenerys. Nobody has ever been so eager to bend a knee to their queen as Jon Snow now is to bend his toward Dany. Hey, it's been a long time since he was in those caves with Ygritte. I get it.

But so, obviously, that pissed Cersei off, so she was ready to blow the whole truce up, until Tyrion... convinced her not to? Uh, this is suspicious. Since when has Tyrion ever had any sway over the sister who loathes him and has wished him dead since birth? Oh, right, he has no sway. Cersei was just setting him and his whole cohort up for the eventual double-cross she has planned. Even though anyone with a half a brain could see this coming, Jaime has always been an optimist when it comes to his twin, so when he eventually finds out that she is just a lying liar who lies, he does what he should have done a million times by now and leaves Cersei behind for good. Where is Jaime off to? We'll find out next season, but we know it'll be cold because he even needs to cover up his gold hand with a glove because the snow is starting to fall—and fall hard.

This episode also had double-crossing sisters in store, with what was easily one of the most satisfying deaths of the series: that of the despicable, duplicitous Littlefinger. And how satisfying was it that his death came at the hands of the Stark children, whose very family was ravaged thanks to Littlefinger's machinations? Very satisfying. For the last couple of episodes, as Arya and Sansa have seemed to fall prey to Littlefinger's plots to tear them asunder, it was incredibly frustrating to imagine that these sisters, who had separately been through so much, could not come together now that they finally had the chance. But it was all for show, demonstrating that we should never underestimate the power of the wolf pack. It also demonstrated that while Jon Snow might not be able to tell a lie, the Stark girls sure can, which is a vast improvement on their father's abilities to lie for the greater good. Maybe once he's back from King's Landing, Jon Snow can learn a thing or two from his sisters. Except, oh wait, they are definitely not his sisters.

So, yeah, we already knew Jon Snow was not only not a Snow, but not actually a Stark. He was a Targaryen, the rightful heir to Rhaegar Targaryen—and to the Iron Throne. But it wasn't until this episode that we learn that Jon Snow's real name is actually Aegon Targaryen, the same name of the original Targaryen conqueror, who flew to Westeros centuries before uniting all seven kingdoms and establishing a dynasty that would eventually result in his great-great-great-great-great-great niece Daenerys boning her nephew.

Yeah, Dany and Jon finally had sex on their boat back from King's Landing. Those two really love boats, and you know what? I love boats, too. They're fun. The fact that they had sex while hundreds of miles away in Winterfell, Bran and Samwell (with a huge, uncredited assist from Gilly) were realizing that Jon was really Aegon, and thus Dany's nephew, was the kind of weird, painfully obvious narrative exposition that would be more annoying if this show wasn't all about the annoyingly obvious reveals that also just seem annoyingly obvious because for literally every possible outcome on this show, there are 86 fan theories about what might happen next. Which is to say, it's impossible to be surprised by the show's plot twists anymore, because every potential outcome has already been explored. Like, in what other fictional universe would an ice dragon not be surprising? Only this one.

All of which is to say, I am fine with Jon and Dany being together, because while incest is bad (what a weird thing to have to say), this world is very much not real, and they are both very pretty, and I will never say it's a bad thing to see Jon Snow's butt. I will never say it, and you can't make me! The real question here is whether or not the prophecy Daenerys got from the witch she was about to murder could be true, namely, that she can't have children. I would guess that there's a loophole involved, but we will see. That's what Season 8 is for.

What else Season 8 will be for is an apocalyptic, climate change-esque existential battle between the White Walkers, led by the Night King on zombie Viserion, and all the living people and animals in Westeros. We know it's going to happen because the Wall is finally down thanks to the ice-blue fire spewed out of Viserion's mouth to great effect. It was another case of knowing what was coming, but still being pretty blown away by the whole thing. Which, honestly, is pretty much what happened this whole season. We might have always been able to guess what was going to happen, and it was often predictable in its roundabout was, but it was still satisfying because it was all leading to a conclusion in which we would get to see Jon Snow's butt. (Kidding! Mostly.)

But no, really: The whole thing about this series, is that its soap opera ways can sometimes seem too obvious and even annoying in their reliance on shock value, but if you just lean into it and enjoy the ride, it's a thrilling enough adventure to let you look past the seemingly infinite twists and turns and just enjoy the view. (Of Jon Snow's butt. Obviously.)