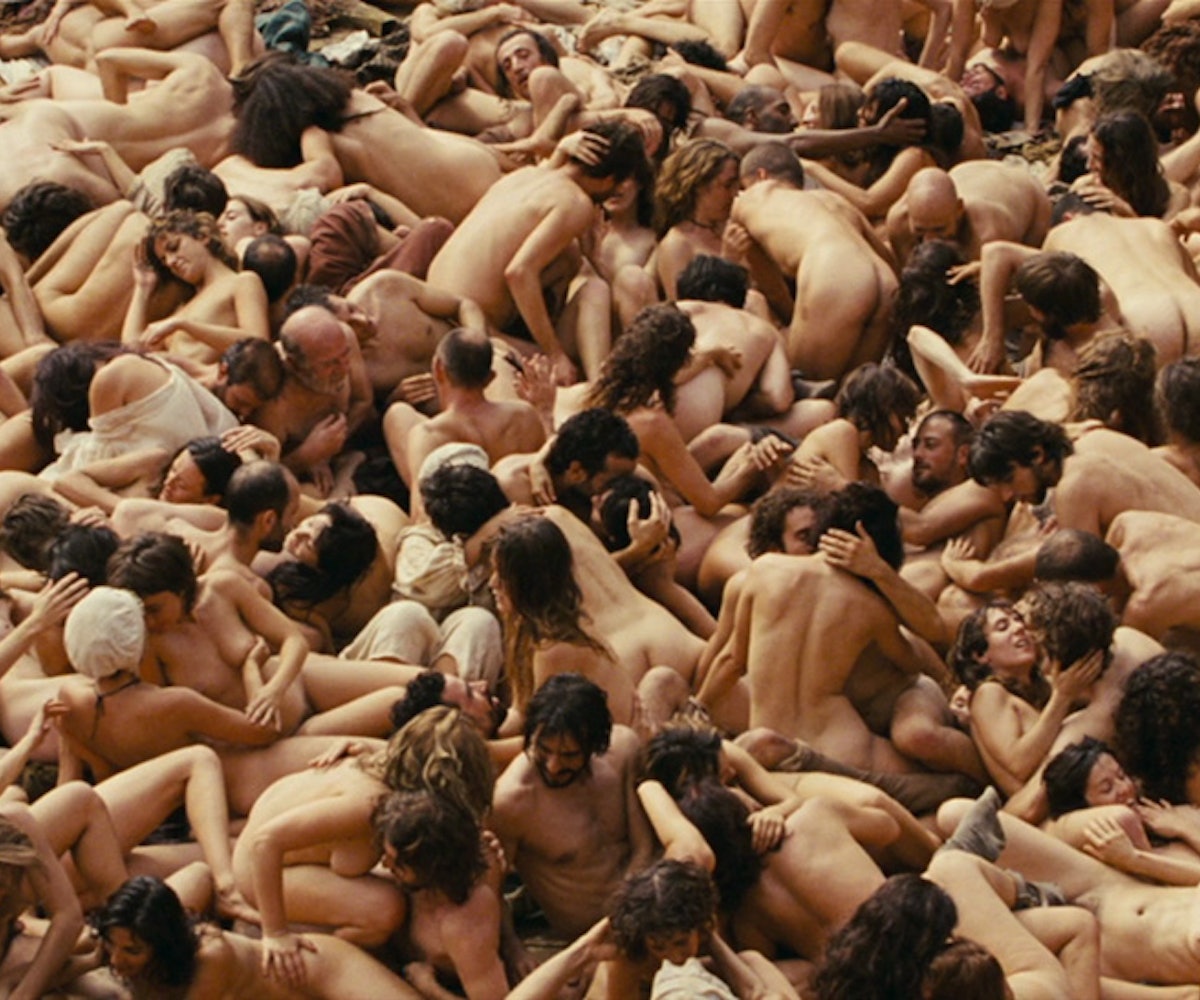 Sex. On. Film. It can be an awkward thing to see in a theater or on the couch, especially with your parents, but the truth is everybody likes it…especially them (it’s been years!). But not all movies are created equal in terms of on-screen erotica.

Not everything you see in the movies is sexy, and most of it can’t even be attempted. So, here is our list of movie sex tropes that you shouldn’t bring home.

Perhaps is some universe, watching or being watched IRL while having sex is appealing—even covetable—but I think the reality is more checking your phone and locking eyes in a weird way. These two films tackle the mythic sexual interloper:

Devil’s Advocate – The dénouement of this film is that (spoiler alert!) Al Pacino’s character is both the Devil and Keanu Reeves’ character’s father. As a means of enticement toward the dark side, Pacino offers up his willing daughter to have sex with Reeves. So, basically, we have a final scene that sees our protagonist groping his sister while his father watches. Don’t do this.

Wild Things – The part of this movie you know is when Neve Campbell and Denise Richards bob around in a pool making out. What you might have forgotten about that scene is that just beyond the lifeguard stand is an icky Kevin Bacon watching and filming the two women. Give it a rest Bacon, you’ve been creeping us all out ever since Stir of Echoes.

The Matrix Reloaded – The trick to the rave/orgy scene in this film is that there’s no overt sex happening en masse at the party (though it’s implied), but Neo and Trinity are getting busy just down the hall in what looks to be a pizza oven. I say that if you’re going to an end-of-days rub-down rave, just have sex on the dance floor like everybody else.

Perfume: The Story of a Murder – It’s the smell that launched a thousands hips. At the end of this epic (the film is two hours and 27 minutes), our perfume-maker hero played by Ben Whishaw wafts a handkerchief dabbed in his trademark scent in the center of a crowded town square. The perfume is so intoxicating, it leads to mass copulation. Keep in mind this film is a period piece, so the costuming is elaborate and the disrobing intense.

The Matrix Reloaded (top), Perfume: The Story of a Murder (bottom)

Election – To be fair, Chris Klein’s character says, “My leg wasn’t bugging me too much, and the weather was so nice, and every day after school Lisa and I would go to her house to fuck and have a hot tub.” The implication here being that the sex is happening post-hot tub. But the scene that follows sees Lisa mounting Klein’s character in the hot tub, which means things went down below the water line. This is a movie trope that for too long has stood uncontested. Don’t have sex under water, it is not cute and you can get hurt.

From Here to Eternity – I have no idea what happens in this movie other than the fact that two people roll around the beach presumably pre-sex while ocean water shoots up and washes over them. It’s like a rising tide of a UTI, and I, for one, think sea water should be avoided during sex at all costs.

I call bullshit on this one. The best part of sex is not the looking at each other. But that didn’t stop these films from “going for it” and by “it,” we mean orchids and blue conversation.

40 Days and 40 Nights – We all remember the setup: He’s given up sex for lent and she’s not Rachel Leigh Cook. Perhaps the most recognizable scene from this wonderful romantic comedy set in an impossibly inexpensive San Francisco is the flower scene. He can’t get down, so instead the pair decide to give each other orchid, sliding it up and down until the ultimate pleasure is achieved. Early Hartnett is the best Hartnett, but this is ridiculous.

Bent – Full disclosure: I haven’t seen this movie. According to Wikipedia, the film “revolves around the persecution of homosexuals in Nazi Germany after the murder of SA leader Ernst Röhm on the Night of the Long Knives.” One “sex” scene from Bent makes its way on many Internet lists for both its implausibility and also sexiness. The two male leads are standing nude in the baking sun as some form of Nazi torture. The men cannot touch one another, so they instead talk their way to climax. “Did you? Yes. Did you? Yes.”

For the life of me, I can’t think of a suitable song to play during sex. All the obvious choices seem, well, obvious. The radio might be a safe option, just pick a station that plays Sade and Marvin Gaye on repeat. Or try to hit an Usher-themed “two for Tuesdays.” Whatever you choose, don’t play Phil Collins…

American Psycho – Every scene in this film is a cautionary tale. One sex scene finishes with character Patrick Bateman chasing a girl into a staircase and dropping a chainsaw on her from several flights above. In another, Mr. Bateman sets up a tripod and to film himself doing the deed. He then puts on Phil Collins, a cardinal sin in the sex-soundtrack realm. “This is ‘Sussudio,’ a great, great song,” he says. “A personal favorite.”

People like to have sex in public, right? If they do (and I’m sure they do), the question then becomes how public is public. One scene from an awful action flick answers that very question.

Crank – It’s very hard to judge this scene within the context of the entire film. And that’s because the entire film is shit. But straight-up crazy shit. We’re talking about a movie where the conceit is that Jason Statham has to do something extreme every few minutes so that his heart rate stays high, or else a poison will be released into his bloodstream to kill him. It’s like the movie Speed, except instead of a bus, audiences get Jason Statham’s poorly acted body. So, when Statham’s heart rate is getting dangerously low in Los Angeles’ Chinatown because, I guess, he’s so bored, public sex is the logical antidote. Statham grabs Amy Smart and has comical sex with her while hordes of cartoonish and excited Chinese people cheer in amazement. Bravo!

It’s 2015 and VR sex is upon us. There is an assortment of tools including the Oculas Rift and WiFi Fleshlights that can simulate sex. But there’s no replacement for the real thing, and all this tech is becoming a buzzkill. Here’s one movie that actually gets that right.

Having sex in a car, on a boat, or even in a car on a boat is not a great idea. They say that necessity is the mother of invention, and car sex is for teenagers with nowhere else to go. Train sex, on the other hand, is an ageless odyssey that should be attempted, but is probably illegal. Here, we have scenes of both.

Risky Business – This one is a double-whammy. We have Tom Cruise and Rebecca De Mornay going H.A.M. in a deserted Chicago subway car, and we also have MORE PHIL COLLINS! To be fair, “In the Air Tonight” is a better Collins classic for sexiness, but still probably still a misstep only possible in an ’80s sound-editing room.

Titanic­ – This film was so popular, that Britney Spears plot-checked it during the interlude of “Oops!...I Did it Again” (punctuation hers). No surprise, the movie’s success was driven largely by teenagers, who, as mentioned above, love having sex in cars. The big romantic payoff in the film is that steamy, streaking hand-sex scene in the back of the fancy car. While this became a fantasy for every boy and girl in America, older audiences were probably rolling their eyes thinking, “That seems uncomfortable.”

Candles are a fire hazard, as simple as that. It’s not that sex around fire isn’t dope (it is), but it’s just so dangerous. Too many sex scenes occur amid a blinding array of burning wicks. Also, movies LOVE to pour some hot wax on hard bodies. The only thing worse than a fire hazard is a mess, making these two scenes downright irresponsible:

Wolf of Wall Street – According to Variety, it was costar Margot Robbie who talked Leonardo DiCaprio into sticking a candle in his butt. “I said if he was committed to the role, then he would do it properly,” says Robbie. Well, it worked. Leo did it, and it was a nice touch. It could be argued, however, that maybe something less flammable and drippy should have been used instead. Again, safety thrown to the wind for cinematic dramatics.

Body of Evidence – Who knew this movie even existed. It stars Willem Dafoe and Madonna and a totally absurd sex scene in which both parties look deeply uncomfortable with one another. What’s worse is that they insist on a lot of unflattering and unflattening nudity and even more candle-play. We didn’t ask for this.