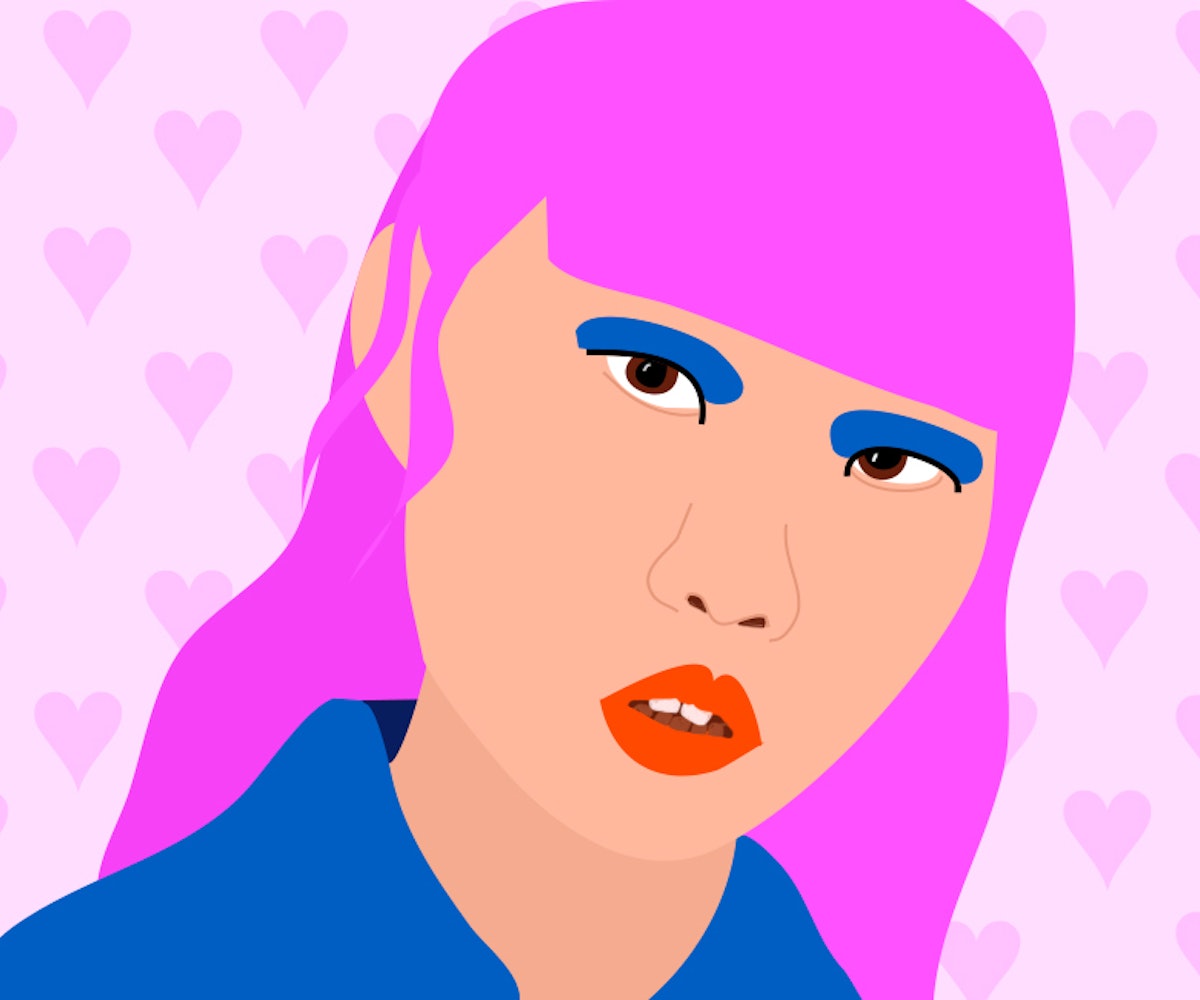 In Places and Faces, writers explore the ways in which the aesthetic peculiarities of the places where they grew up defined their sense of beauty as they move throughout the world. Below, Becky McFalls-Schwartz explores her relationship to David Bowie's "China Girl," and what it meant to grow up as a Korean adoptee in Utah in the '80s.

“Stop squinting.” The photographer glanced up from the camera in annoyance. I didn’t understand. I wasn’t aware that I’d been squinting; this was a revelation. “Open your eyes.”

My eyes were open, but not to their maximum capacity, it’s true. At eight years old, I hadn’t had a lot of experience in interpreting social contexts; it seemed I’d gotten this one wrong. Gripping the back of the prop chair, I reconfigured my features into an expression of alarm.

The photo was to commemorate my First Communion, and I delighted in any occasion to dress up. My white sacramental dress, with its allusions to weddings and bridal gowns, was a particular favorite, second only to my sister’s satin prom dress.

Yet my expression in the photo is troubling. My chin is angled down as if in prayer, but I’m looking up at the camera. My eyes are wide, unnervingly so, and my smile is strained and unnatural. It’s as though I can see a tsunami brewing behind you, swelling into an ominous wall of seawater and kelp, yet I’m trying to convince you that everything is normal, that nothing is out of place.

It was 1988, and in Utah, like so many other places, there was little variation in what was considered beautiful. Barbie exemplified the ideal, and downgrades were assigned by range of deviation from her form. For women and girls of color, such denigration was enacted piecemeal. Each limb and lock of hair, iris and areola were measured against an ideal that would grow stronger and clearer with every aberration.

For all eyes judged dark and murky, the platonic ideal shone more painfully blue. For each strand of hair too black, too straight, or too kinky, a blond, tempered curl bounced boldly into view. This process was performed daily, hourly, by the second, producing an addled and impaired form of proprioception, a loss of the body in space.

I was adopted as an infant from Korea, a country that relatives who’d served in the military in or around the peninsula described as foul-smelling and packed with “foreigners,” many of whom, they said, couldn’t even care for their own children. “We picked you out just like a dog at the pound,” my mother would recall fondly; appending this in later years with: “But dogs never forget what we do for them.”

In 1988 my parents adopted a second child from Korea, this time a five-year-old girl. While the two of us would forge a deep and profound bond, it was not without conflict—she was a painful reminder of my otherness, of our persistent foreignness in American culture.

This is not to say that our parents didn’t try. There were Korean heritage summer camps, weekly outings for chow mein, and in my early teens, a Chinese psychiatrist. But it was always with a gesture of being sent away, and I didn't want to be grouped with "them."

Eventually, I discovered that we were not alone—there were others like us. I learned that I looked just like Connie Chung, for example, as well as Kristi Yamaguchi; that if I cut my hair, I’d be indiscernible from Bruce Lee (except that Bruce Lee would be squinting). Resembling so many others could get quite confusing, and I endeavored to be helpful. Specifically, this meant maneuvering within the stereotypes (when I wasn’t practicing whiteness), quick to extinguish fires at the fray.

The first time I saw David Bowie’s music video, “China Girl,” I was speechless. For many of us growing up in the ‘80s, Bowie—or Jareth, as he was known in Labyrinth—provided an early exercise in desire, a productive blueprint for sexual attraction. How I envied Sarah’s position, to be adrift in Escher Country with the Goblin King.

Yet when Bowie unceremoniously appeared onscreen with an Asian-looking woman, I wanted to be anyone but her. She was so startlingly, flagrantly visible—so exposed—as though she’d wandered naked into public unawares.

The lyrics faded into the background as I fixed my eyes onto the woman’s exceedingly Asian-looking face. Every televised inch of her was subjected to my ruthless scrutiny. Her eyes. Her teeth. Those fingernails.

I watched as she laughed, slept, and cradled a bowl of rice; as Bowie conjured costumes for her from thin air. And then suddenly for one fleeting, feverish moment, I felt dizzyingly, expansively hopeful: David Bowie could like someone like me?

I looked over my shoulder at my siblings to see what they thought, and they were laughing. “Little China Girl! Beck, that’s you!”

“No, it’s not!” I protested, twisting around to hide my face. Onscreen, Geeling Ng sat up in bed screaming, and then began to laugh. I felt nauseous.

Dumb chink, I thought, my cheeks inflamed. Get off the screen. You look so stupid.

“It’s in the white of my eyes,” Bowie explained.

It was in mine, too.

What pains me most about my expression in my Communion photo (and in later photos for which I’d adopt the same pose), is that I know what’s behind it, even if I wasn’t aware of it at the time. Eyelids trained toward the ceiling, whites painfully, spectacularly exposed, I thought I’d finally caught on to some of their magic. I’m cured! Praise God! My eye sockets splintered in pain, but with each stroke of anguish my mind shimmered and pulsed with exhilarating images of whiteness. Ghostly analgesics for a ghostly disease. When the cameras finally went off, the flash was blinding.

I am fast approaching 40, decades since the events described here took place. I moved to New York, graduated from college, and met and married my husband. I've traveled to Korea to meet my biological family (including my identical twin), and I've lost my younger sister to cancer. In many ways, I feel I've grown, expanded, and condensed. Yet while writing this, I suddenly started crying; the wounds still run so deep.

All racists are physiognomists, linking the pigment of skin, the slant of an eye, to a facility with numbers and calculations, a penchant for criminality. Yet as those so scripted well know: between, beneath, above, and within the caricatures, exist other lives, quite undetected, like an octopus shape-shifting into rock when a shadow passes overhead. It’s where love exists, and beauty; and everything in between.

NEXT UP
Beauty
11 AAPI Beauty Pros and Creators You Should Follow Right Now
Beauty
The 2022 Billboard Music Awards Brought Out The Best of Rockstar Beauty
Beauty
Meet Matthew Newman, The Hairstylist Behind the Latest Viral TikTok Blowout Tutorial
Beauty
Leave it To Miley Cyrus To Bring Back 2000s Side Bangs